You are here: Home › West End, Garifuna Jam Sessions and Some Snorkel Pics 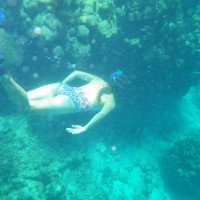 We rented a car last weekend so everyone could see a little more of the island. Carl, Faye, Toni and Randall spent Saturday exploring Sandy Bay and West End. Lily and I were both getting a sore throat and stayed behind to rest and read. The Carambola Botanical Gardens was a great place to get familiar with the island’s tropical plants. Toni returned with a cinnamon tree leaf for Lily. They also had a yummy lunch at West Bay and walked around town awhile hunting down Faye a souvenir straw hat. Saturday night, we walked down to the Garifuna drum session set up at the Fantasy Island beach. Four beautiful dark ebony dancers danced while the drums thumped out the tune. It was mesmerizing to watch how the dancers carried themselves – often keeping their graceful head, shoulders and outstretched arms very still and in place while their feet were stamping out a quick rhythm in the sand. 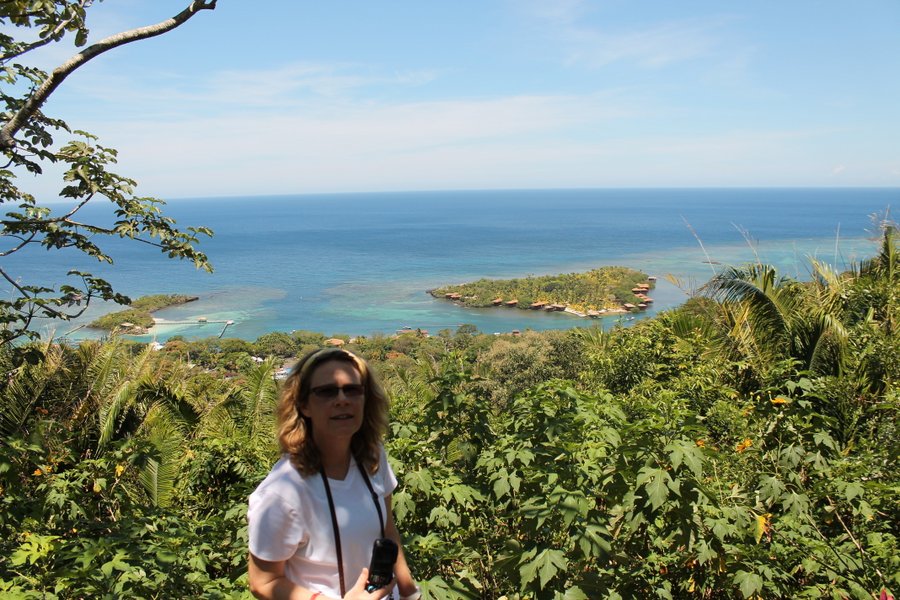 Toni at the overlook above Anthony’s Key 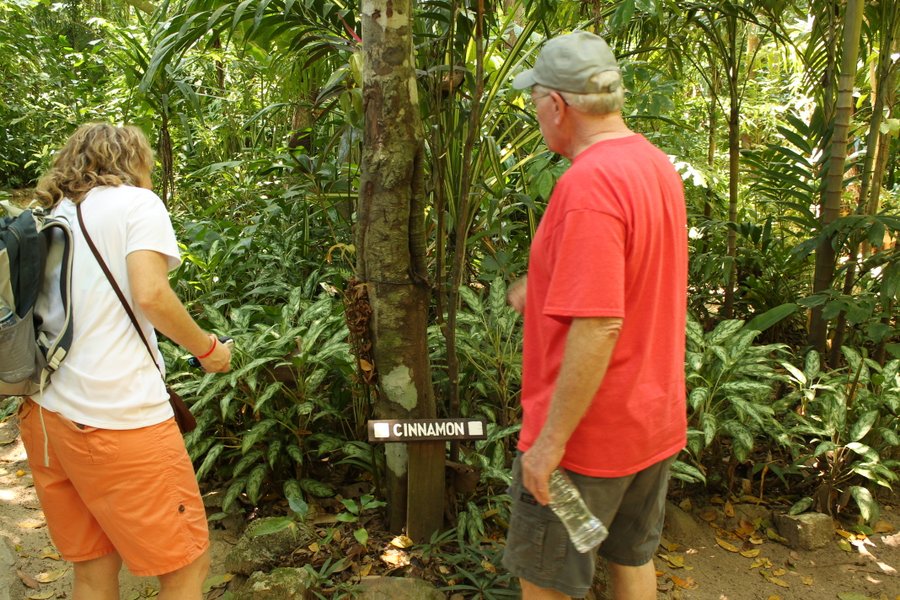 On Sunday, we realized that both restaurants we wanted to sample were closed for the day. We were about to pile in the car for the short ride to the local sports bar’s happy hour when Dominic drove by to see if we wanted to follow them to a drum session at a Garifuna village on the northeast side of the island. We decided this made for a more Honduran experience than Herby’s Happy Hour. This drum session was the real deal with drumming so loud it reverberated through your skull. The whole village seemed to be in attendance and the women came to the front one-by-one, put a few limpiras in the tip jar and performed a short, sexy gyration to the music. Dominic had said that the village wants the kids to learn the Garifuna songs and dance and several little girls got out there for a short dance. One woman did most of the singing but a male voice provided a deep bass background chant, all of which was in dialect but still sounded really cool if incomprehensible. Lily and her friend, Cheyenne, climbed up a tree so they could a better view as the crowd grew bigger and were joined by a few other tree climbers. We left after about an hour to seek food. By that time, we had missed happy hour so we decided on China Palace. It had been recommended to us as where you go to stuff yourself, family-meal style. We just finished the last of the astounding pile of fried rice yesterday. 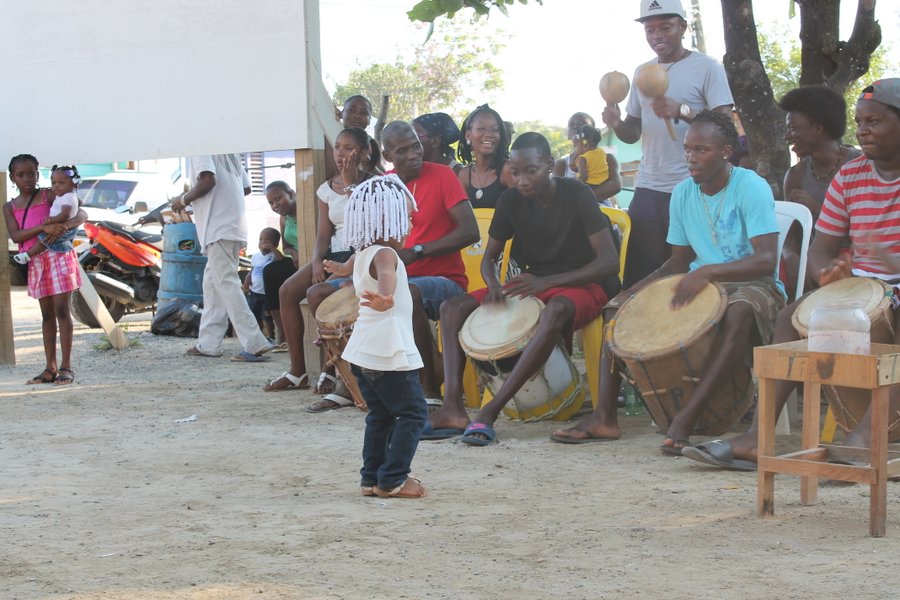 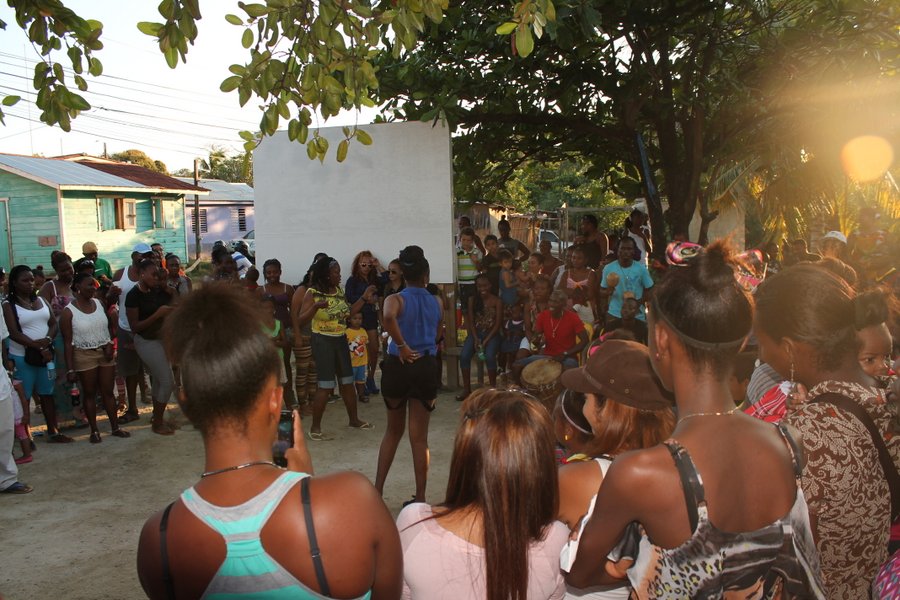 The crowd kept getting bigger. 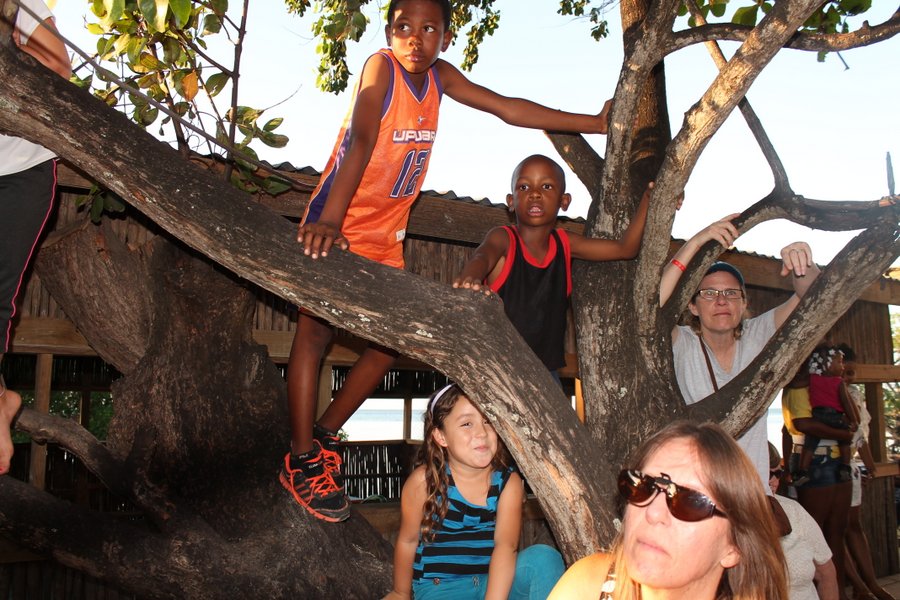 Perched in the tree for a better view. 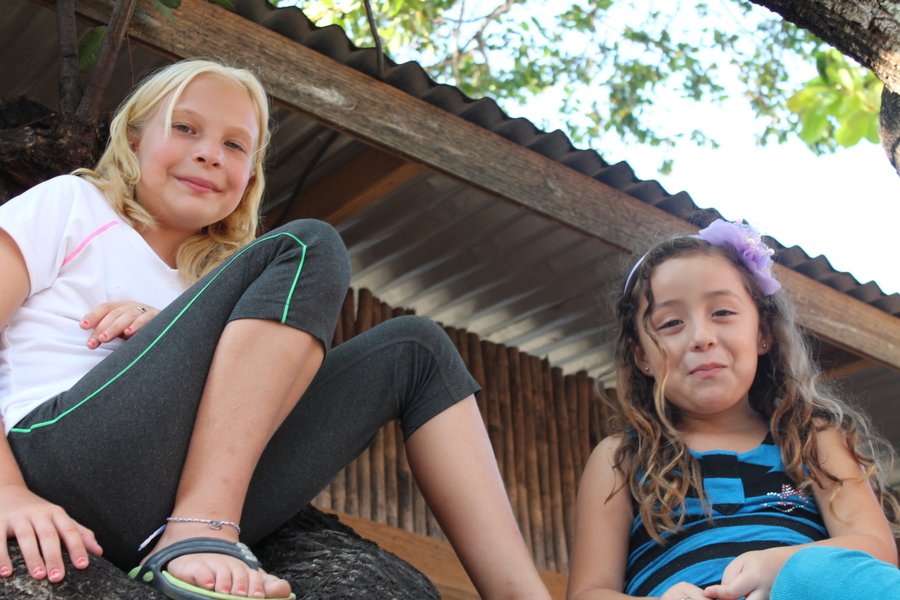 Lily and Cheyenne in the tree

As indicated on the previous post, snorkeling continued through the trip. Toni, Randall and I dingied out to snorkel the reef and shipwreck off CoCo View Resort. We also dinghied outside the reef to snorkel above the reef wall and the deep outer reef area between the wall and the breakwater coral. This area seemed a little less populated but had some huge stag horn and purple Gorgonian fan coral and lots of other curious growth to examine. We saw the big barracuda I had been hearing about as well as several large lobster. We saw lots and lots of colorful parrot fish and deep blue angelfish-like beauties swimming slowly in large formations. Now that we have some pics, Lily and I may spend a few days looking at pictures and trying to do some fish identification. Toni, if you have more pics or figure out any id’s on anything, email me and I will post them!! Tomorrow Lily is going to blog about Monday’s iguana farm tour and post a few more pics so stay tuned for more. 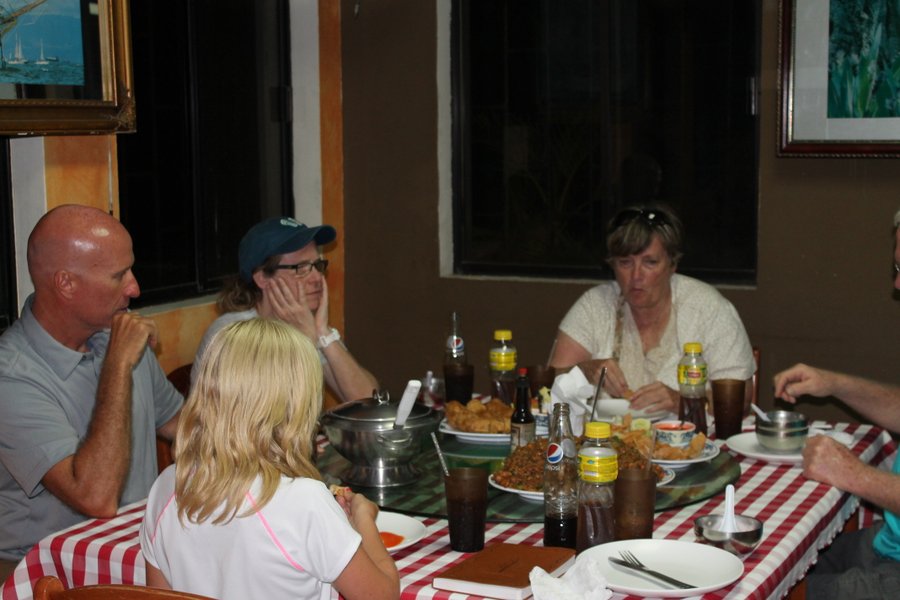 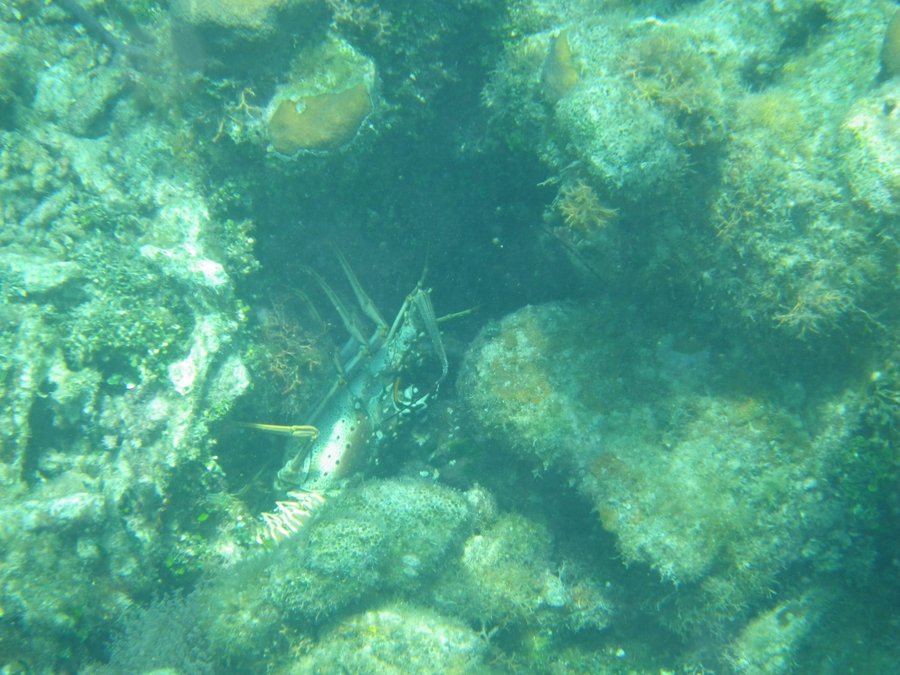 Lobster. Can’t eat him. He is in a protected area and it is also out-of-season. 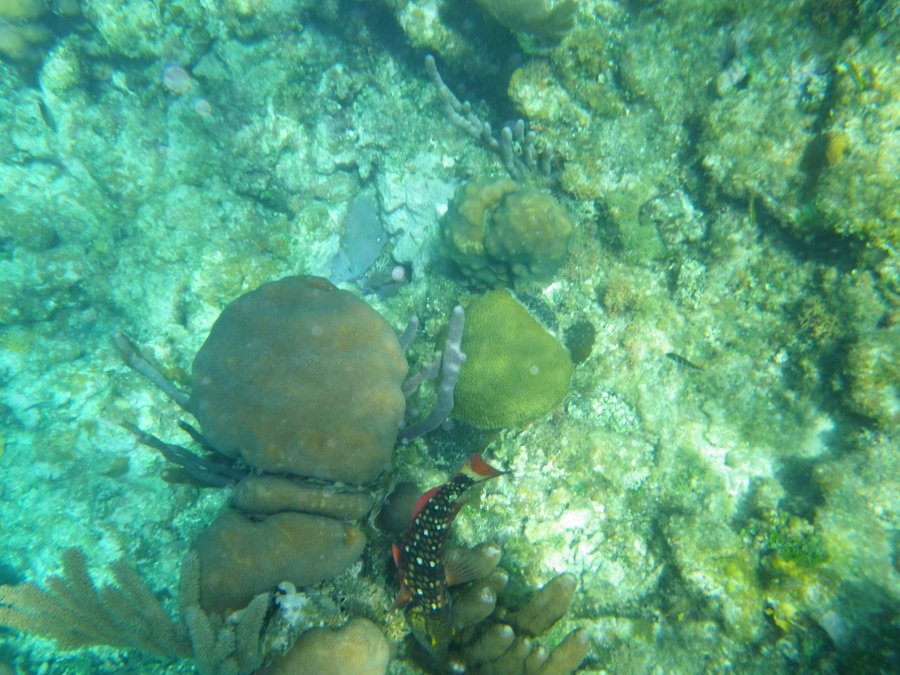 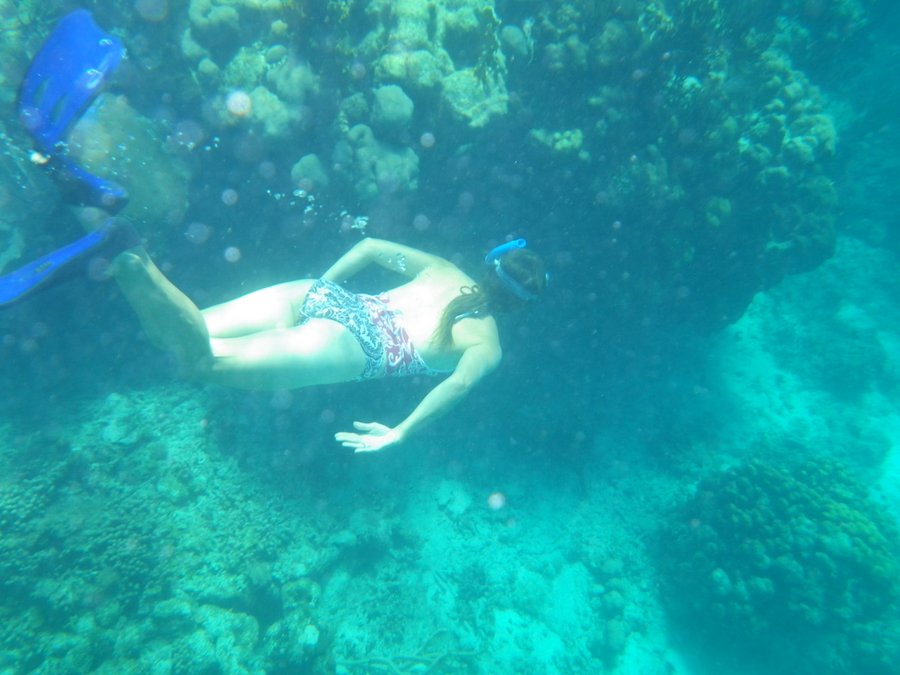 It is so beautiful down there. 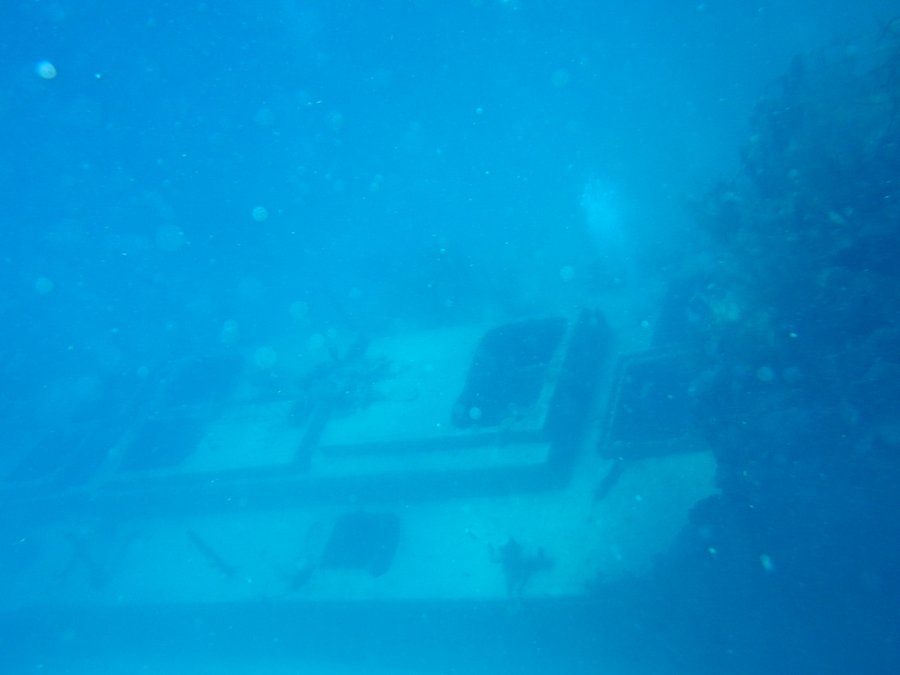