You are here: Home › Getting Settled, Soaked and Sunburned 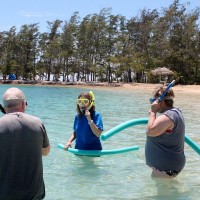 What to do first? Well, the first matter to attend to was a boat tour and discussing where everyone could fall blissfully to sleep after a couple of rum-laced sleeping aides. We had priced hotel rooms and discussed logistics beforehand. We had suggested that everyone could stay aboard if they thought they would be comfortable on Foxtrot. The one concern with that idea was the heat. An air-conditioned hotel room is hard to argue against. Plus, during the boat tour it became apparent that Faye was going to risk an ankle re-injury if she stayed aboard all week. Getting on and off the boat was a problem and, even on board, moving between the hulls required lots of steps of variable height and depth which must often be timed with the slight rocking and bouncing floor movement as the waves roll underneath. We sort of don’t think much about this although we probably have a shin ding or head bump every few days. So, yes, a degree of nimbleness comes in handy and a bit of pain here and there is to be expected. Carl and Faye decided this was not the stuff dream vacations are made of. 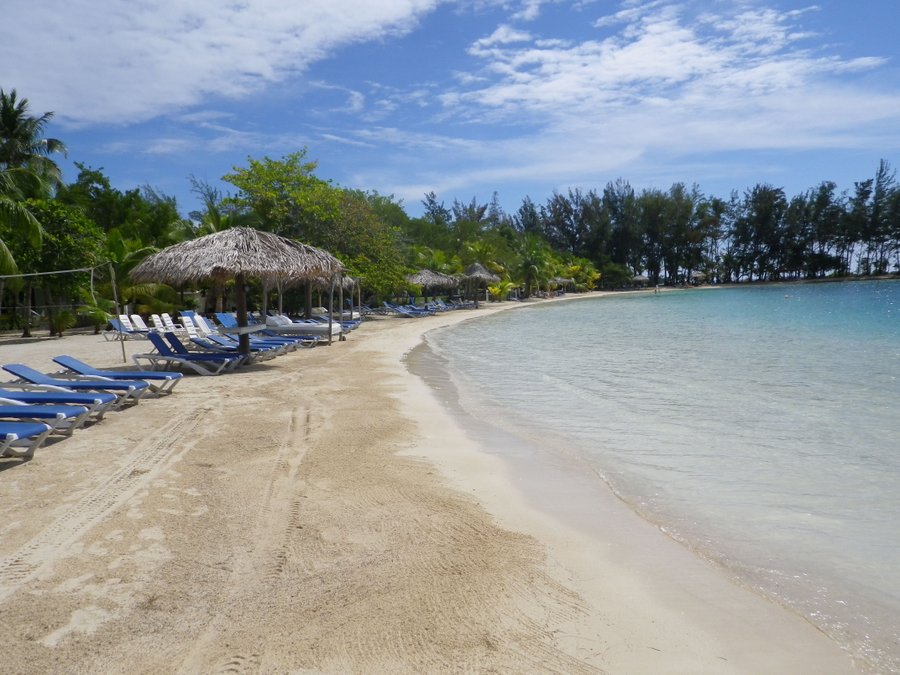 So we set off to take a look at the rooms that Fantasy Island rents out to boater guests at a discounted rental rate. However, we tried to manage expectations just a bit. You might think of Fantasy Island as one big family and the boaters as the illegitimate children. The marina boaters have access to one of the hotel rooms so that we can use the toilet and showers. Our bathroom, however, did not come with a toilet seat for our toilet and we are often locked out for hours at a time for no apparent reason. However, the available room ended up looking pretty good and was priced very reasonably. Plus, the a/c worked and for that alone it might have been worth it. Toni took Jake’s now-empty port berth and was tired enough every night to ignore the heat. 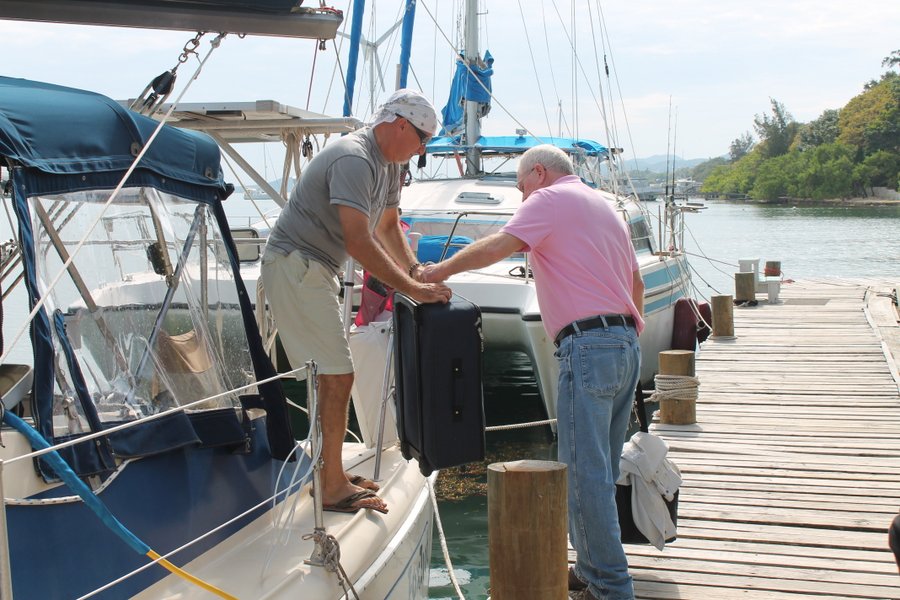 Luggage hand-off after deciding the get a hotel room.

We spent the entire following two days mostly in the water. The priorities went something like this: Snorkel, explore by kayak, claim a couple of well-placed beach loungers and watch the waves roll in. Toni, Carl and Faye tried out the snorkel gear just off the beach and got to see a barracuda and a lionfish plus all the little schools of minnows that dart around around you as you trail them underwater. Toni snuck in a little snorkel time almost everyday, I think, and it was beautiful all week. I will post some pics from her underwater camera tomorrow. There is now three days of rain in the forecast so we are really happy about the weather we had. 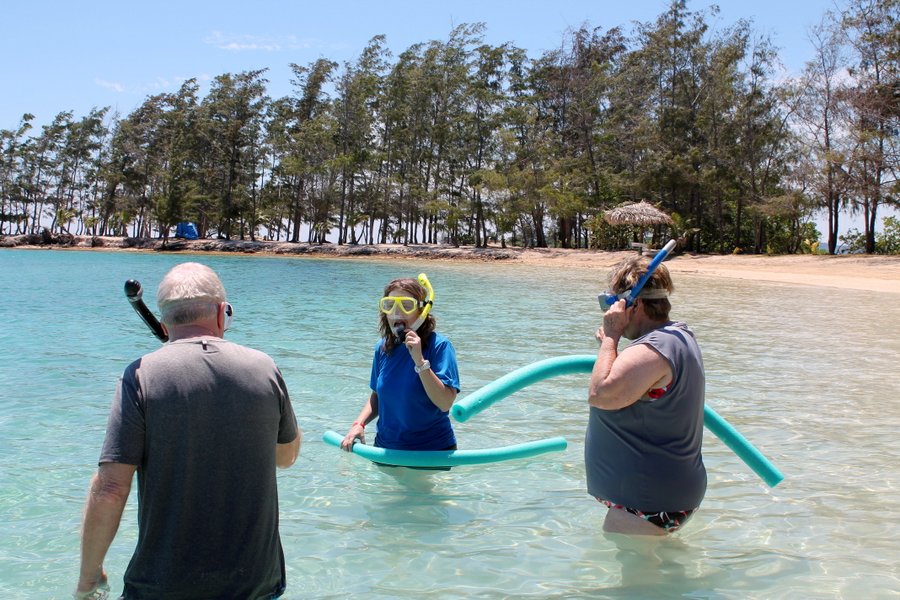 Ok let’s stay together, guys. It is a big ocean. 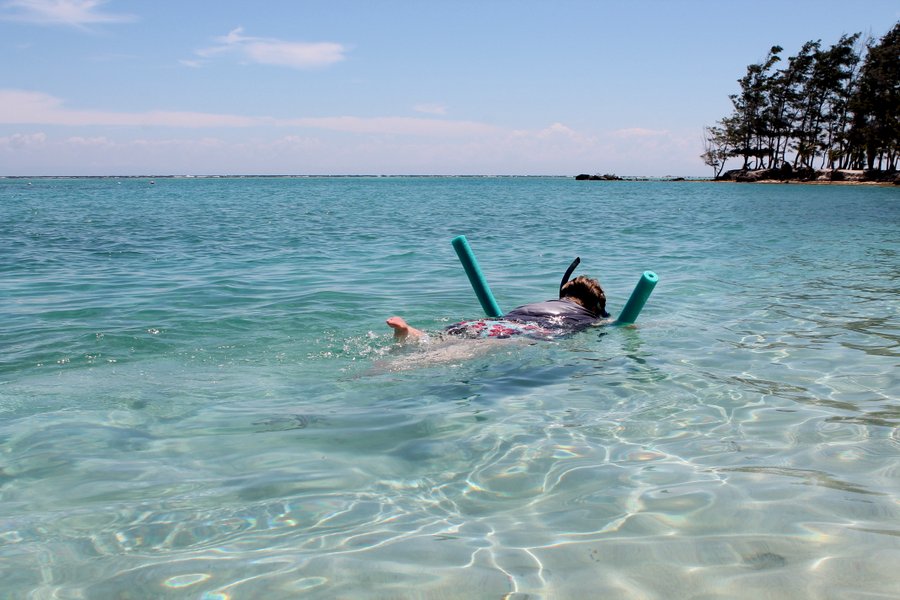 Faye in pursuit of a barracuda. 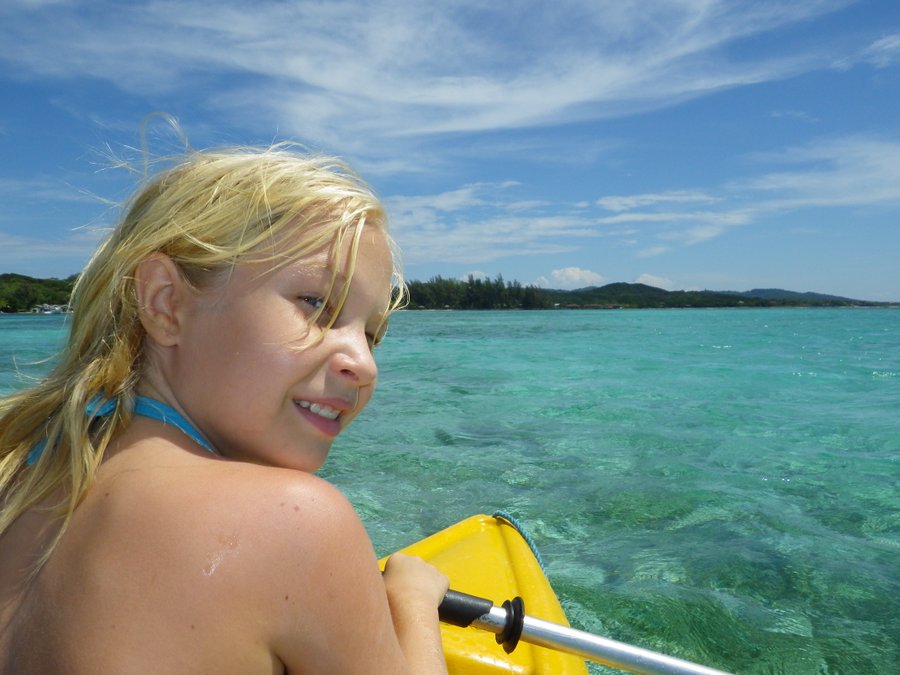 Friday afternoon was pretty calm so we went for a short sail. We motored past the boats at anchor in French Harbor. As is typical for Roatan, the wind was out of the east so we sailed a beam reach straight south for about an hour and then turned and headed home. We did 6 – 7 knots making it about a mile off shore with land in sight the entire time. The water was choppy and we caught a few strong waves over the bow. Once, a surprise wave splashed the bimini overhead so I think Faye was ok with not going on to the Honduran mainland. We also dinghied over to Big French Key for a long lunch and a little hammock time. During lunch, we watched one of the employees rake piles of seagrass out of the water and throw it up on a small floating barge. He went off duty and by the time we were ready to leave, the beach was almost entirely blocked with the floating vegetation so much that we rowed the boat out a ways before starting the motor. Seagrass removal is a constant activity on Fantasy Island, too. It sits around in little mounds all along the beach until someone with the tractor bucket or wheelbarrow comes to cart away the stinking mess. We always sort of ponder where these huge mounds go and Carl and Faye asked the same question. I guess sometime we need to follow the seagrass dump truck that leaves the property several times a day and see if there is a mile high mound off some cliff somewhere or if they just dump it in the water on the other side, a slight overland journey from one side of the island to the other like a land ferry for floating seagrass. 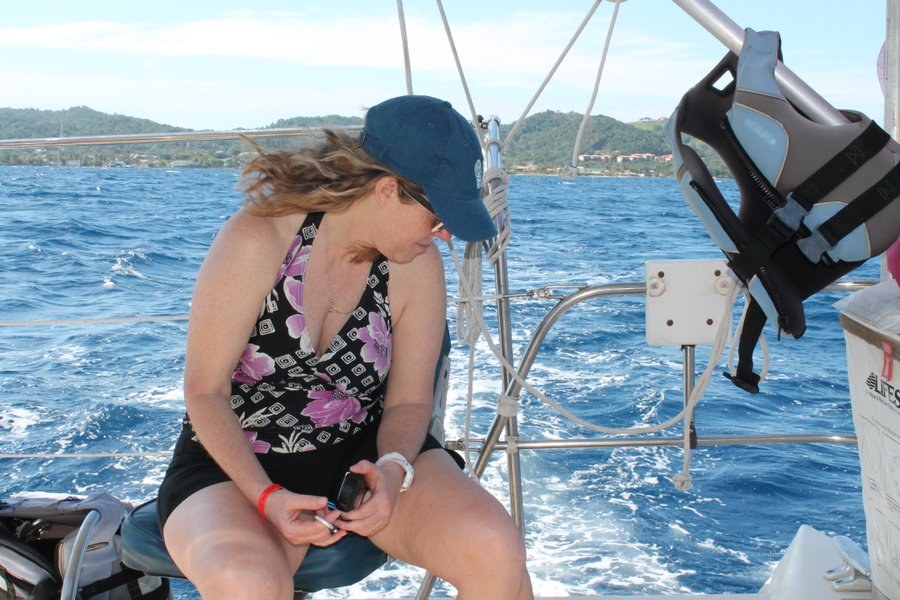 Toni on Foxtrot’s back deck watching our wake. 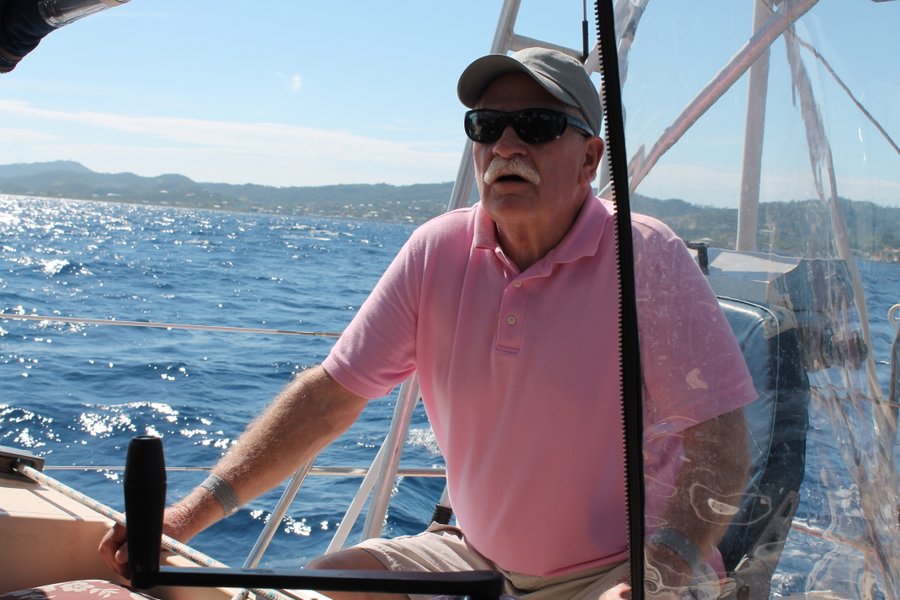 Carl hanging on so his chair doesn’t tip over. We have a couple of unmounted chairs which make for a fun ride on the back deck. 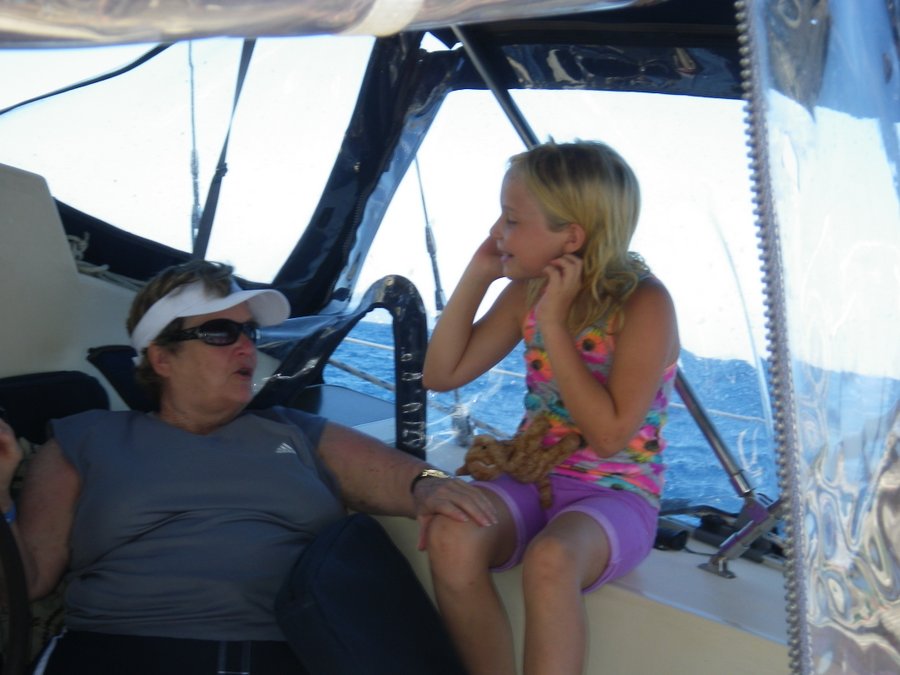 Don’t worry, Mamaw. I won’t blow off the boat. 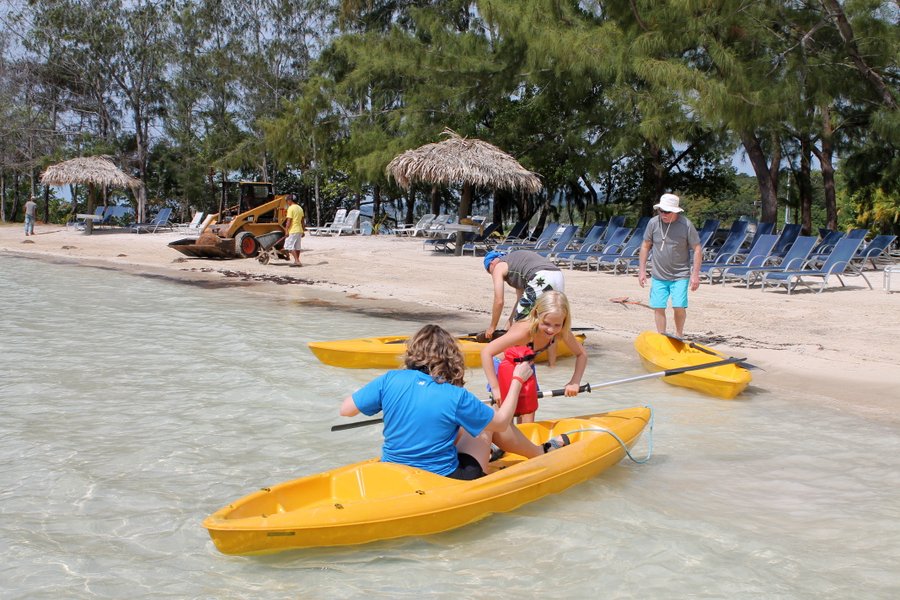 Carl, Toni, Lily and Randall getting in the kayaks. Seagrass removal just visible on the far left of the pic.

4 Responses to Getting Settled, Soaked and Sunburned