By our guesstimate, El Cid is a little more than 1.5 miles from Puerto Morelos. Short cab rides in Isla Mujeres and Cancun have been a dollar or two. However, this similarly short ride from El Cid to Puerto Morelos is fifteen dollars, one-way. Once in PM, you can go the same distance for two bucks up to the highway where you can catch a local shuttle (collectivo) up and down the Riveria Maya also for reasonable rates. So what gives with the pricey ride from El Cid? We didn’t know.

Taxi rate inflation comes down to what the market will bear, we decided. El Cid was a little too far for most to walk and was full of tourists who were willing to shell out fifteen bucks for an air-conditioned ride to town. With the number of trips we had planned, however, the cost quickly adds up. This weekend we packed a few sandwiches and headed into town bound for Tulum. Just as we planned, we walked the first stretch, caught a taxi for the next stretch, caught a collectivo to Playa del Carmen and switched to another collectivo to Tulum and then did it again three hours later northbound. 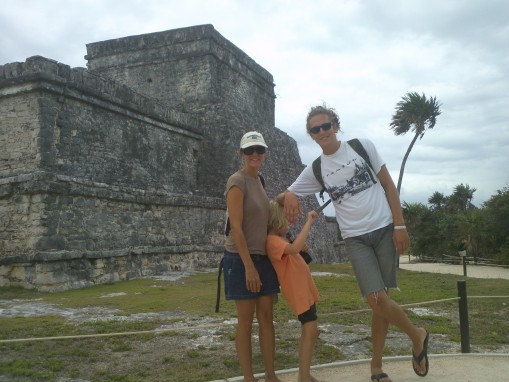 Tulum was interesting but required some imagination. The once vibrant city now seems like a manicured garden with the ruins resting well off the walking paths like untouchable crypts. We read the few little placards and tried to visualize the society, the commerce, the boats coming and going with honey, cotton and other trade goods. We stood at the temple and gazed up the stone steps where the unwilling human sacrifices took their last steps. We tried to picture the ruins painted up in bright colors as described in the park information. Still, we left feeling we still know little about the Mayans. A lot of the Mayan artifacts are now scattered in museums across the Yucatan peninsula. We heard the Mayan museum in Cancun has a great collection and we sort of feel like we know a little about the ruins but little about the people.

We got back to PM from Tulum and spent some time shopping at the street vendors. Lily picked out a late birthday present of a little Mexican doll. On the walk home, we scanned the mangroves which crowd both sides of the roads for crocodiles. Sure enough, we saw a medium-sized crocodile sitting in the mud several yards from the edge of the road. Lily and I beat the heck out of there while Randall and Jake hung around to see if it moved.

After Saturday’s Tulum outing, we stayed at El Cid on Sunday enjoying some restaurant/drink discounts we earned by listening to the El Cid sales presentation. Our salesman, Jerry, found out we were on a boat and, I think, discerned our collective disinterest pretty quickly. He was entertaining, though, and had lots of questions about our sail. He is a former chef and also had a lot of advice on things to try from the resort buffet. After assuring his boss (they always run prospects by two different salespersons) that we weren’t ready to sign up today, we were on our way to some feasting at the buffet followed by several rounds of free fruity drinks. We also asked James if there were a lot of crocs outside the resort grounds like the one we had seen.

“Oh yes. No one walks to town,” he said. “No. No. The cocodrilos are too numerous in this surrounding area.”
“The cocodrilos? This is Spanish for crocodile?”
“Yes. Cocodrilos. Yes, they say this name comes from drill and coconut and that they can drill into a coconut with their teeth like so” he said while making the motion with one hand of a mouth clamping down on a fist.

We walked to town again today for breakfast and a few groceries. Sure enough, this time we saw a sign around the corner from the main road which says “Caution!: Habitat de Cocodrilos.” Now we sort of don’t mind the taxis buzzing by us. They make a lot of noise and one passes by every couple of minutes. Fifteen dollars is pretty cheap when you are bleeding from a cocodrilo bite.