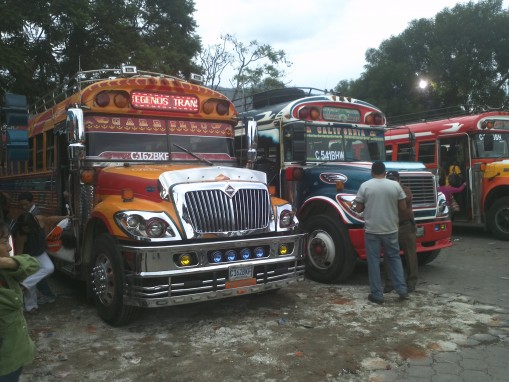 Chicken buses lined up and waiting

Just when you think I have run out of bus stories…

Strolling in the Antigua outdoor market, we notice the 10 – 15 Chicken buses parked in the back lot. A chicken bus is an old American school bus reborn as a brightly painted Guatemalan public transportation bus. Many have gleaming chrome detailing and fancy lettering proudly proclaiming both the destination and “Regalito de Dios” (Gift from God) but the insides are unimproved for your flashback to middle school enjoyment. We had yet to actually see a chicken on a bus so we decided to complete our Guatemalan bus experience and catch a chicken bus to Lake Atitlan. Yes, the locals really do carry chickens to market by bus. We sent Michelle to inquire about bathroom breaks. It went something like this:

Ticket Man to Michelle: Si. Si. Muy bano. No problemo.
Us To Michelle: Right. We have heard that one before.
Michelle: I am just asking the questions, here.

We headed into the mountains early last Saturday morning after a cup of coffee and a pastry. We have our choice of seats. We sat mid-bus and Michelle, not feeling too great, heads to the back seat and sort of curls up. We wonder if she will make it. A couple of hours pass and we stop a number of times for more passengers. Chicken buses are notorious for always being able to take on any waiting passenger. Pretty soon, we are three people per bus seat and accelerating through tighter and tighter curves. Each time the bus stops, we watch the bus driver for any indication that this is the promised bathroom break. He gets off once or twice for what appears to be a personal bathroom break but quickly reboards and lurches back on to the road. Finally, we reach Solola which is just kilometers from our destination. We are so close that we are resolved to just sitting it out to the bitter end. Still, we eye the bus driver suspiciously as he gets off the bus. Is he taking another personal bathroom break? No, he strolls over to the shoe shine stand and takes a seat. We watch in disbelief as our bus drives casually gets his shoes shined while we shift uncomfortably in our packed bus. We sort of hope his nicely shined shoes meet with some of the abundant sidewalk dog crap. Finally, at Panajachel on Lake Atitlan, we herd into the first available restaurant, order cold drinks and line up for the bathroom. Michelle says she is better but will never forget the trip.

We walk around town and end up at Mario’s Rooms. Standing in the pretty courtyard admiring the flowers, we hear a familiar voice. Tuk is laying in a hammock outside her room. She says the rooms are clean but mosquitoes are a bit bothersome. We had not expected mosquitoes up in the higher altitude but they seem to be thriving. We take a couple of rooms for us and then head down to the waterfront to look around. 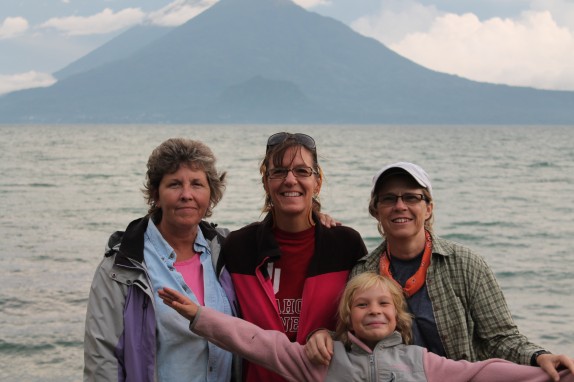 Lake Atitlan is a beautiful, light blue lake surrounded by volcanoes. Several little villages dot the lake’s shore, each of which has its own style of traditional dress and handicrafts. Boats line the waterfront ready to take tourists across to visit each village. We meet a friendly boat captain named Pedro who explains our options. We can take the public ferry which has a set route to a couple of villages on a pre-set time frame. Or we can take a private boat which will take us to the villages of our choice and leave when we are ready. Since there are six in our party, the cost works out about the same. We ask Pedro a number of questions especially when we understand he wants a small deposit to reserve the boat. He assures us that he has lots of American Facebook friends to vouch for his good name. He or his brother or father will be waiting at 8:30 the next morning with the boat we are shown. So we decide to trust pleasant Pedro with the deposit.
We wake up to a cool beautiful morning. After breakfast, we head to the waterfront and find no sign of Pedro. However, an older gentleman is there with Pedro’s card. Andres assures us he is Pedro’s father but the boat he leads us to is not the boat we were promised. We are hesitant but finally Andres gets Pedro on the phone to tell us himself that Andres will take great care of us, the boat is a very good boat and we have nothing to worry over. By this time, we are starting to like smiling Andres and the boat seems seaworthy. We pile in and glide across the rippling blue water. We pull up to our first stop, Santiago Atitlan, in about 15 minutes.

Over the course of the day, we stop at three different villages. While each are different culturally, they share some physical similarities. Andres pulls up each time to a rather rickety dock in each town and ties up. We climb off and, after a few steps, stand at the base of a small paved road leading up through the heart of each town. In order to see the village, you initially climb the streets past the shops and homes which seem about to tumble into the water. In fact, a few homes are flooded due to the lake’s fluctuating water level. 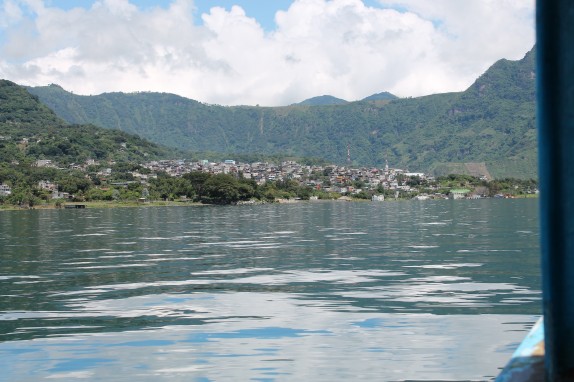 Lake Atitlan’s villages are all built on the steep volcano sides. 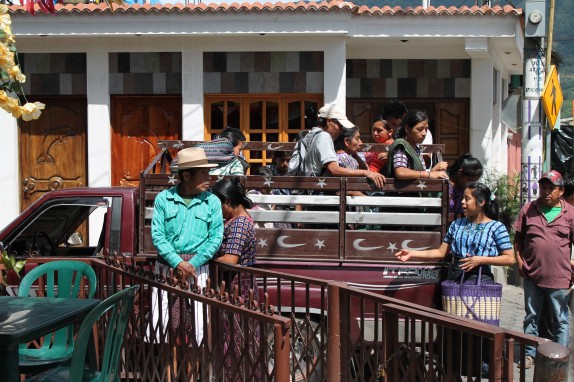 People unloading from the back of the pickup.

Santiago Atitlan is the busiest stop of the day. We have to press our way through the streets. Several pickups whose truck beds are loaded with standing passengers stop to allow men, women and little children to jump down and join the throng. Many men wear the traditional long striped, wide legged shorts. The women and girls often wear beautiful, matching wrap around style skirts. The market features more food than we have been seeing with lots of stalls selling dried minnows, fresh chicken cut while you wait and lots of oddly shaped vegetables and colorful seasonings that we do not recognize.

In the distance, we see a church dome. Toni had told us that Santiago’s Catholic Church – Iglesia Parroquial Santiago Apostol –  has an Oklahoma connection. Father Stanley Rother was born in Okarche, Ok and spent years serving as a Guatemalan missionary. He initiated many improvements to the area including establishing a hospital and translating the Bible into the local Mayan dialect. He was killed in his rectory in 1981 by Guatemalan guerrillas. His distraught parishioners made arrangements to send his body to Oklahoma but asked and were granted permission to keep his heart and blood in Santiago Atitlan for burial under the church.

It was Sunday morning and the church was filling up for the morning mass. We were able to first locate a plaque in the church’s plaza mentioning Father Rother. We walked around a bit more sort of wishing we were not there at such a busy time. Finally, we asked around and discovered that a small room at the side of the church held a memorial featuring pictures and personal effects of Father Rother. 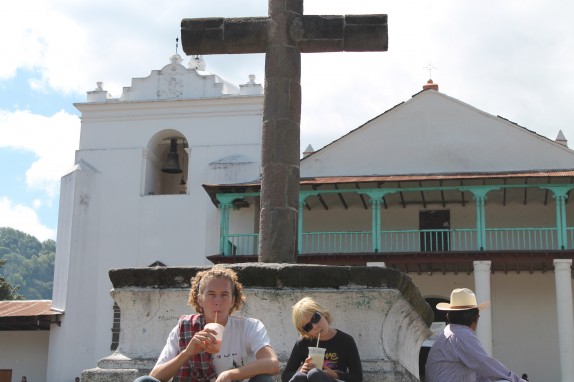 Jake and Lily in front of the Iglesia Parroquial Santiago Apostol 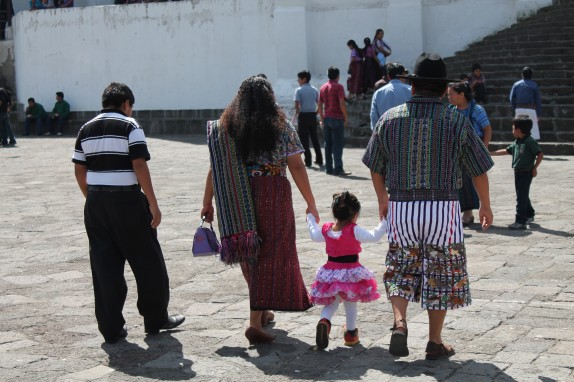 Churchgoers were seen in both traditional Mayan clothing and modern attire.

San Pedro has been described to us as the “hippie gringo village.” We wander about and take in a traditional dance involving several costumed dancers. Unfortunately, we are there too early in the day to really experience San Pedro’s party vibe.  We have lunch on the waterfront with a view of Indian Nose, the nearby volcano shaped like a reclining Indian. We decide to move on the the next village, San Juan, where we understand a tuk-tuk will take you to the top of the volcano. However, at San Juan, we learn that the excursion takes a couple of hours. We end up browsing the art shops and textile markets which San Juan is known for. We head back to our hotel midday and head for our favorite Michelado stand. The Michelado stand outside Mario’s serves up a spicy version with lots of lime juice, pepper and the secret ingredient – Salsa de English (AKA worcestershire). 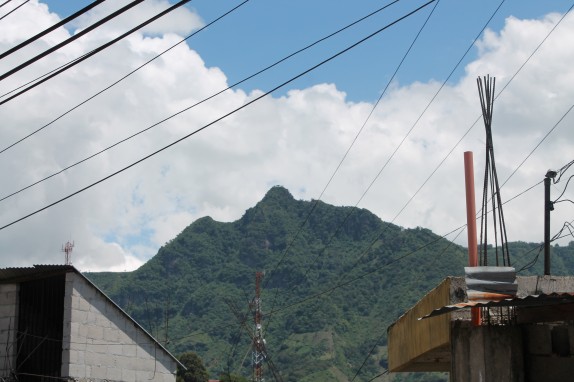 Indian Nose resembles an ancient Mayan profile looking up at the sky. 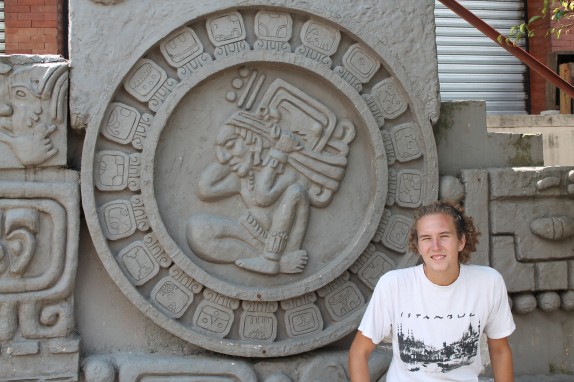 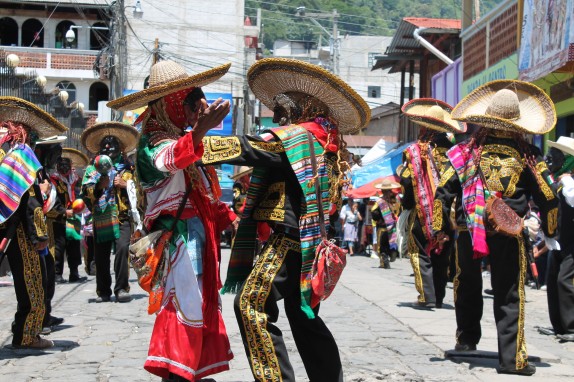 Dancing in the streets of San Pedro 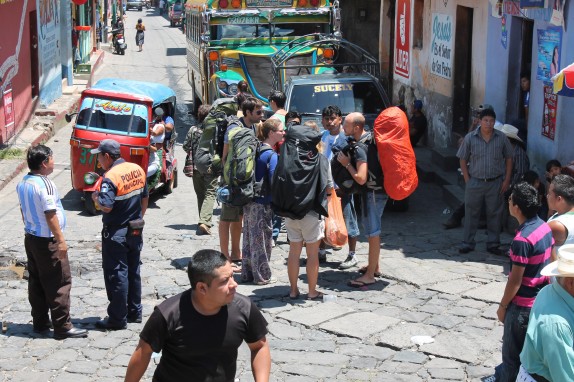 Backpackers frequent the streets of San Pedro. Those with tired feet can usually catch a Chicken Bus such as the one in the background of this pic. 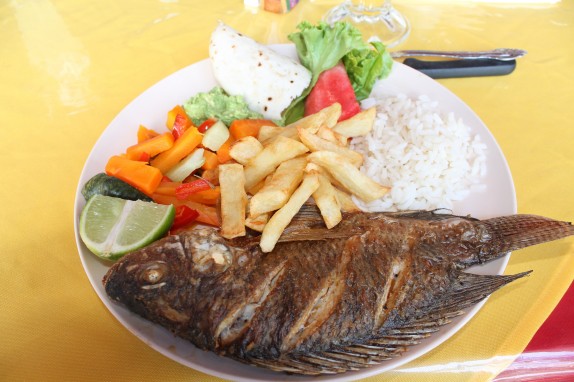 Antigua
Guatemala City and Back to Rio Dulce