I have mentioned that our little excursion involved a lot of buses. On our way to Antigua, we took one of the Litegua especial buses which means assigned seats, air conditioning and a bathroom in the back. We now call this “luxury travel” without batting an eye. We settled in for the 5-6 hour trip to Guatemala City and had prepurchased tickets for the connecting bus for Antigua. However, the bus seemed to be making poor time. And there was this odd jerk each time the bus driver accelerated out of a low gear. Personally, I was focused on the subtitles of the Spanish language movie playing overhead and didn’t notice any problem until Toni said softly and reflectively the following prescient comment: “That could be the transmission.” And then we started the climb into the mountains surrounding Guat City. 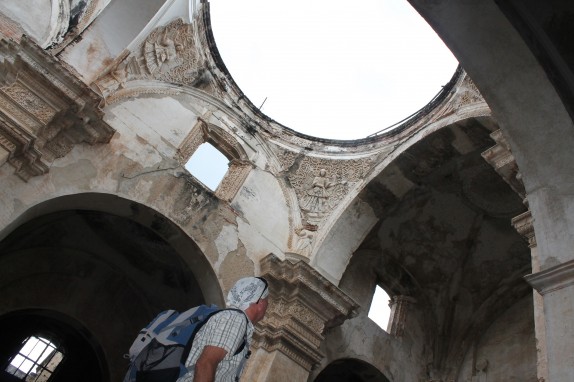 Randall looking up at the carving in the abandoned church.

You can tell recent arrivals to Guatemala by the look on their faces when a Guatemalan bus driver makes his first pass on the two-lane highways (more like one-and-a-half lanes). It is a thing of shame among Guat bus drivers to sit calmly behind any slow moving traffic. We suspect bus drivers collect at the bar in the evening to trade passing stories and must have at least one successful or semi-successful tale of passing a fuel truck around a downhill blind curve in the middle of a small community while texting loving message to separate ladies on his phone (Yes this really happened). On this ride, however, we found ourselves in the unfortunate position of being the extremely slow moving bus holding everything up. The bus puttered along and the jerking increased. We scooted over a few times to let traffic pass more easily. Then, we scooted over and came to a stop. The bus driver and his assistant jumped off with tools. We started again. More jerking. We pulled off again. More running around with tools. Finally, we were all asked to get off. We loitered under the trees and watched traffic go by. A couple of buses stopped and passengers ran over to catch the few available seats. After about an hour, another Litegua bus shows up and is able to take about half of us. Another comes shortly after to collect the rest of us. As we are approaching Guat City 2 hours late for our connecting bus, we discuss other bus options for continuing on to Antigua. But, Litegua came through with a private shuttle which was sitting ready to run us up to Antigua. 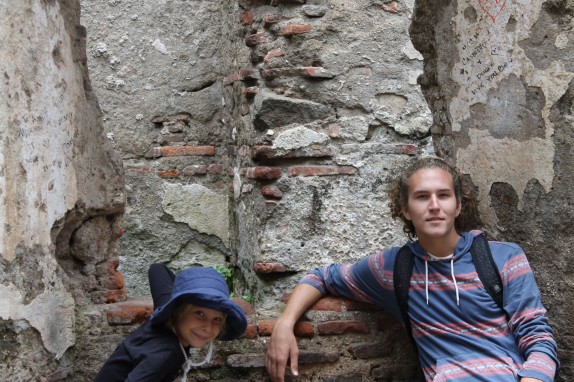 Jake and Lily in front of more ruins from the devastating 1717 earthquake.

We set out immediately to find a room. On the way to Parque Central, the heart of the city, we surprisingly see familiar faces – Henry and Tuk of SV Parpar. They also have their boat at Mar Marina but are doing some inland travel. We decided to follow them to check out their hotel but, on the way, Jake also surprisingly sees the familiar faces of some recent acquaintances from his volunteer hours at Casa Guatemala. He decided to part company with us for a bit to catch up with them. 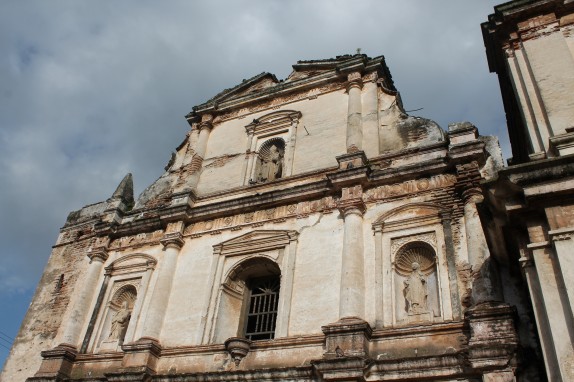 Antigua is famous for it ruins many of which are Spanish Colonial cathedrals.

Henry and Tuk’s hotel didn’t have enough rooms for our party. We went to a hotel next door and took a look at a room with three double beds crammed up almost side-by-side. We are not yet that desperate. We move on down the street to a nicer hotel which again does not have enough vacancy for us all. Finally, we end up at Desconsa #2 which has the perfect arrangement – four single beds in one room and two double beds in another. We attempt to negotiate a better rate but rain is now coming down in buckets so his firm but fair price was quickly accepted. The brief rainstorm left water rushing down the streets. We text Jake the hotel information and head out into the darkening streets for a nearby restaurant. We ended up at Wiener. I can offer no explanation of this strange name but we highly recommend the food and tranquil atmosphere. We text Jake more information about finding us. We give up waiting on him and return to the hotel. He texts back that our directions are inadequate. Yes, he is quite lost. Being lost on the streets of Antigua at night isn’t recommended. Yes, mom is growing concerned. He finally shows up thirty minutes later to explain that he asked numerous shop keepers and police officers for directions and got completely different directions from each. To completey confuse the matters, there were two hotels by the name of Desconsa and two streets by the name of Saint Lucia. I asked if he was scared??? He confirmed that he wasn’t exactly enjoying the walk carrying his phone and all of his money and that the few people out and about looked more ominous in the darkness and all seemed to be eying him as he walked uncertainly up and down the same area, asking directions and shifting his unwanted backpack around. However, Jake is far, far ahead of us in Spanish language acquisition. He is getting quite conversant, can understand directions and is even venturing into pleasantries and conversational joking. At the other end of the spectrum, I stick with simple sentences and get either a blank stare or laughter at my quite unintended jokes. Salud Jake! 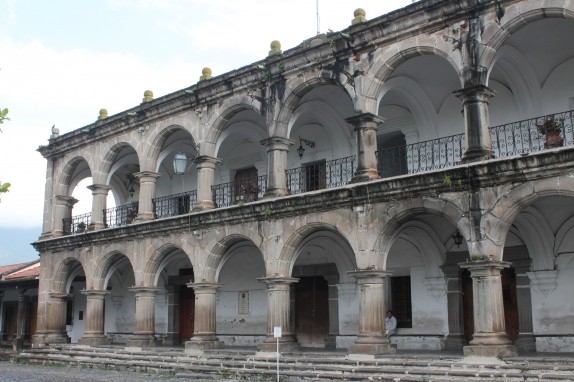 This building is right by Parque Central, a spacious outdoor square surrounded by beautiful architecture.

We started off the next day with a leisurely breakfast. We strolled around town a bit making plans. We ended up deciding on a coffee plantation tour that afternoon and a volcano hiking tour the following day. That afternoon, we caught the Filadelphia shuttle to the coffee plantation on the outskirts of town. Filadelphia has a beautiful coffee farm which includes a resort complete with 20 activites from paintball to ziplining and gorgeous backdrops for a destination wedding. The tour takes you into the coffee fields where the guide explains the complicated Guatemalan coffee production process. The fields are dotted with trees which are trimmed to allow just the right amount of filtered light. In the middle of the fields sits a nursery where two types of coffee plants are grown – arabica and robusto. Filadelphia grows both plants in order to graft the more flavorful arabica foliage to the more hardy robusto roots. Three ladies sit at the grafting table all day long using a razor blade to strip the robusto of their tops, slit the tiny stem and place a sliver of arabica foliage into the slit. Then the top and bottom are taped up with a special grafting tape. 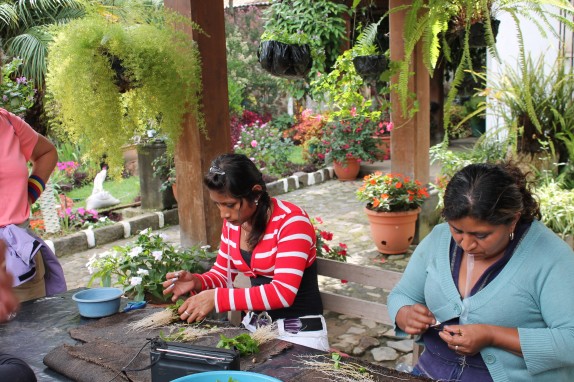 These ladies graft thousands of plants together each day. 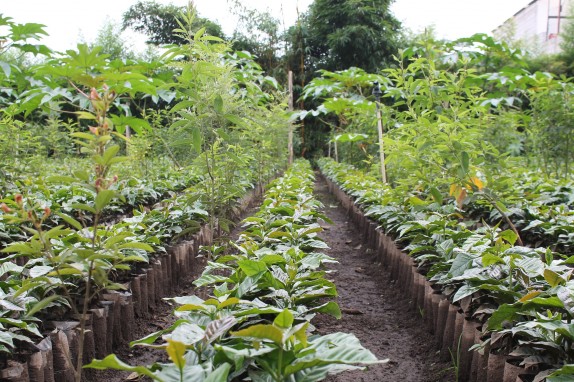 We also toured the coffee bean washing and separation area. The guide explained that the beans are weighed and dumped into water. Poor quality beans will float to the top and the better beans will remain at the bottom. The poor quality beans are collected and sent off to another company who uses them for instant coffee. The guide also confirmed what we had been told about the unavailability of good coffee in Guatemala. Despite the local production of high quality coffee, almost all of the good coffee is exported to the states and the best coffee is sent to the more demanding Japanese market. Guatemalans tend to drink the cheap instant stuff that remains behind.

At last, we reached the coffee roasting area. Hairnets were handed out. Although no roasting was taking place, the smell of freshly roasted coffee permeated the entire area. By this point, we all knew we were getting close to finally getting a taste. We tried to listen patiently but the sight of your friend and family in hairnets, the tiredness of your feet and the smell of coffee really make for a distracted classroom. We were finally escorted to a long table in the cafe where our group of about 20 was served with wonderful black coffee in small white cups and saucers.

Aah. Here we are in the most pleasant, manicured surroundings of a quint cafe having excellent coffee. This is Guatemala at its finest. We are among a mixed group of travelers some of whom appear to be locals on vacation and some of whom are from the states. There is a smattering of Spanish and a bit of English. As we trade comments on how good the coffee is, we also overhear a bit of conversation from two American girls sitting beside us. She is missing her shoes. Thank goodness she managed to hide her money. Her poor friend is staying in the room all day. We join in to this rather disconcerting conversation. Cassidy, a young visitor from Arizona, had been on the Picuya volcano tour yesterday. She had a wonderful time seeing the volcano. One the way down, their shuttle was stopped and they were herded into the jungle at gunpoint. Their money, cameras and bags were taken and they were also ordered to remove their shoes. After the bandits left, their guide drove them straight to the local police. We told Cassidy how sorry we were to hear this story. The guide added that this was a rare occurrence and asked a few questions about the guide’s reaction. Guides come under suspicion in these cases as being in on the robberies but, of course, Cassidy had no way of knowing at this point. So we returned to the hotel for a lengthy discussion on what to do. Go to Picuya as planned or stay in town? Carry all important possession on our person or trust in the hotel room’s locked door? Accept Jake’s offer to remain in town and try to buy a padlock to better secure the room? We ended up skipping on the volcano hike as two of our party woke up sick. Everyone was ok with staying in town for the Jade museum, the Santa Joseph’s Cathedral tour and getting some time in at the street market. 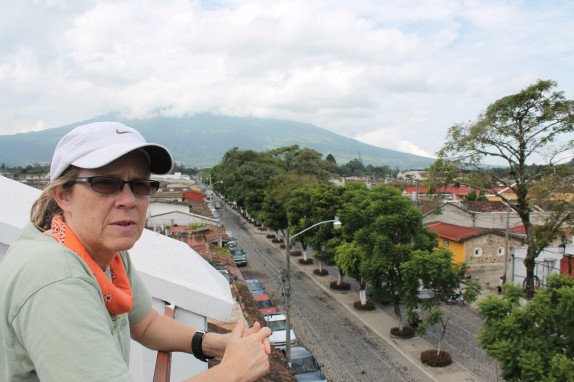 Toni on the rooftop terrace of our hotel with Volcano Aqua in the background.

The Jade museum tour was conducted by a friendly Mayan expert who had done extensive reading of the original Mayan document called the Popul Vuh. She explained how the Mayan were able to create beautiful Jade carvings and ceremonial masks with their rustic tools. We all researched the Mayan calendar symbol for the corresponding Mayan symbol for our dates of birth. After the Jade museum, we toured the Cathedral of San Jose and the art collection housed in the University of San Carlos. There are huge paintings hung in the University’s high ceiling rooms whose windows are all open to the outdoors. Once again, we wondered how long the art and architecture would be preserved in the environment but, obviously, both have withstood centuries of Guatemalan turmoil. In fact, the city itself was abandoned as the country’s capital after an earthquake in 1717 and has been reborn as a mecca for artists, photographers and historians who come for the unique setting. We finished up the day buying some souvenirs at the open air market. 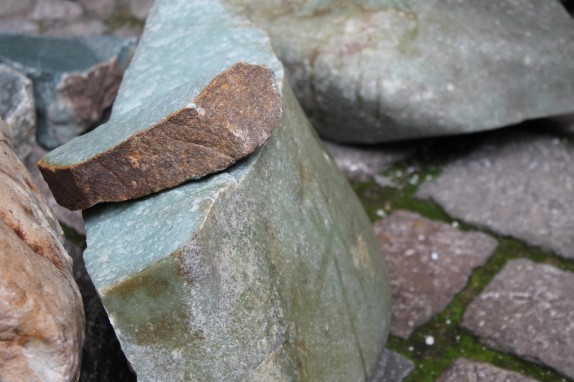 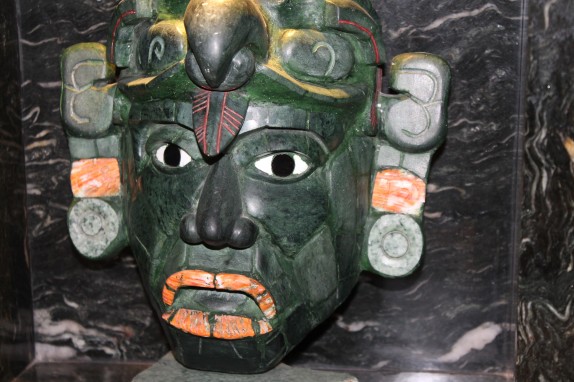 Jade masks are put together on a wooden mask and then often used as a burial decoration. 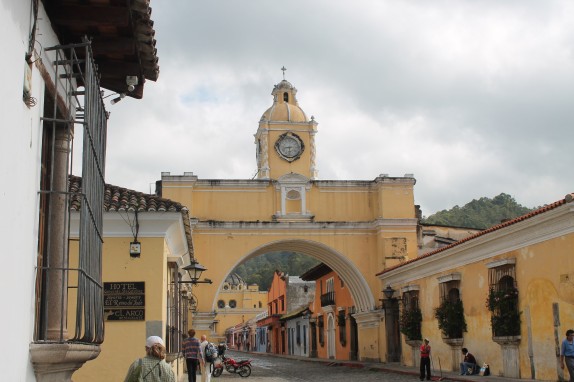 The arch in town is another Antigua landmark 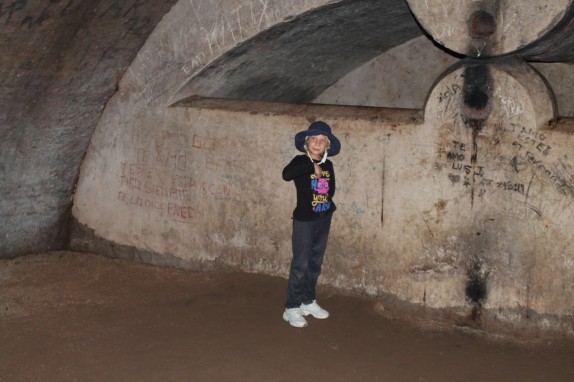 Lily in the spooky church catacombs.