You are here: Home › Freddy’s Friends Fun This Week

We got to spend two days hanging out with Pam. On Wednesday, we helped with her mobile animal clinic. She picked us up from the marina and we went to a small town south of here called Buenos Aires. We had free worming medicine which Pam administers to cats and dogs brought to her table. We also had five kittens which Pam had nursed to health and were available for adoption.

A crowd of children soon showed up. Some of them had pets. Pam got to see several puppies she had previously placed with homes in the area when the owners showed up for the worming medicine. Some of the kids appeared interested in the suckers that Lily and Natalia were handing out. They were supposed to be for the kids who brought in a pet for care but a friendly smile was all Natalia needed in exchange for a sucker. Unfortunately, no one wanted a sweet little yellow kitten and we packed up with all the kittens still in the cage. We went to lunch and Pam’s friend Milton walked to our table with another kitten. She tried to say “No” but Milton insisted that it was unwanted at its current home and needed placed somewhere else. We drove around looking for a second location to set up the clinic and ran into another puppy Pam recognized. She stopped to see if the puppy needed worm medicine. It was a lucky stop. A little crowd formed around the kittens and soon they were all boxed up to send home with new owners. Pam always brings a couple of days of food to give with each pet and explains at what age they should get the girl kittens spayed.

Thursday, we returned to Pam’s farm for horse riding along with Natalia, Tuk (SV ParPar) and Karen of MokaKat. It was Tuk’s first time on a horse and enjoyed the day. She also enjoys the kids and is quick to join in their play. There are some local plants she recognized from her homeland, Thailand. She pointed out cassava growing in the fields and picked a small pea off a riverside plant to eat. She said it was like a small eggplant. We were midway into the ride and Pam asked if we wanted to take the longer trail this time. We were all in favor of going the long way and got to ride to a little town called Milagro. Just past Milagro, we got of the horses for a swim in the San Marcos river. We rode for so long that Natalie almost feel asleep on her horse and was sliding to the side when Pam caught her and woke up. 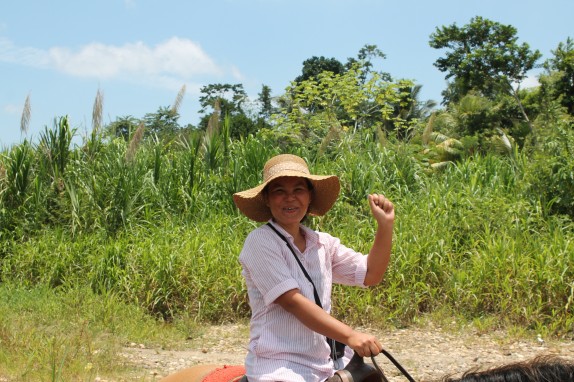 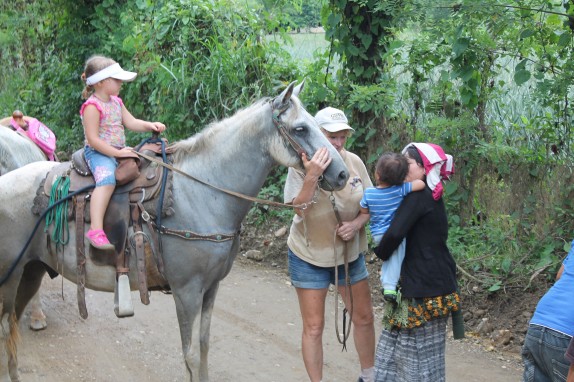 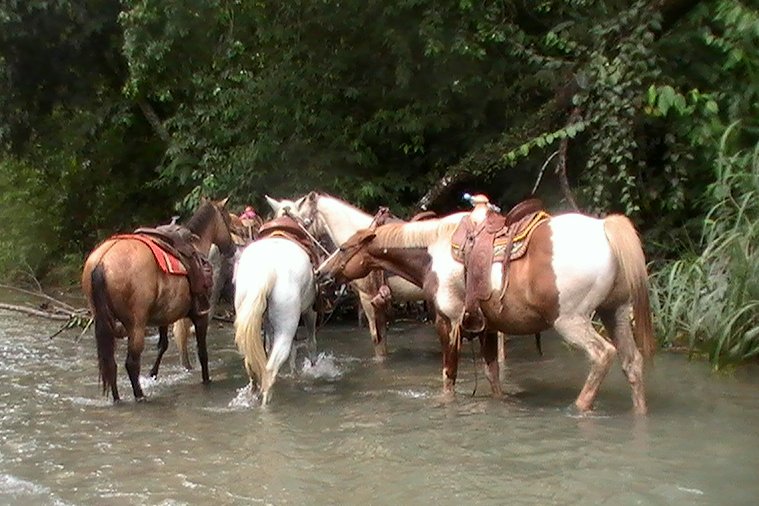 Tied up in the San Marcos, Cowboy decided to nip Gus on the hindquarter. They jostled around until they were free but strayed only a tiny way upstream. spreading out so they didn’t have to share nibbles. 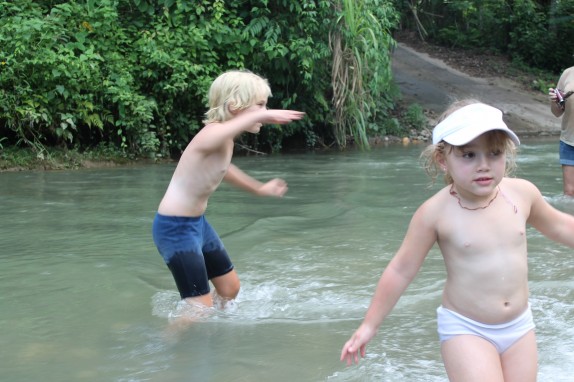 Lily and Natalia. I didn’t take many pics as I was worried about having the camera around the splashing girls. The banks were so overgrown that there was nowhere good to lay the camera. I hung it from a branch and, when the horses broke free, the were nipping the branches right by my camera. I was lucky they didn’t free it. 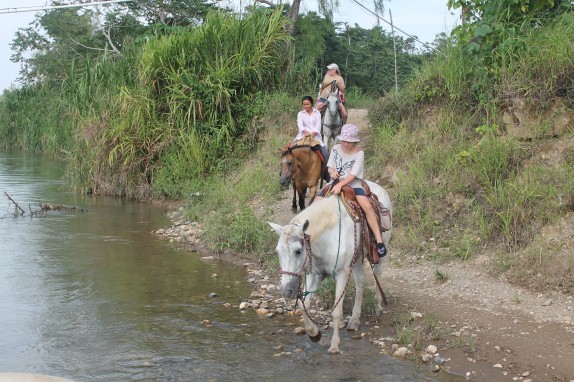 River crossing are so fun and this last stretch has a steep bank to ride down going into the river. 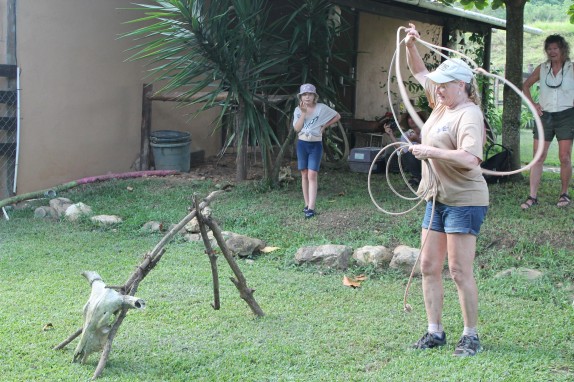 Pam gave us a quick roping lesson. She was a competitive roper when they were back in the states.

All the kids have been working on artwork to give away at the boaters flea market. Freddy’s Friends sets up a table to make funnel cakes which they sell to make money for the pet rescue and treatments. The kids drew several pictures of Freddy to give to anyone who made a donation. They sold a few pictures and generated lots of traffic by the booth with their youthful enthusiasm.