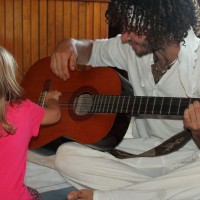 We have been feeling quite healthy. We are even getting past the recurring desparate-dash-to-the-bathroom episodes. So when Jake meet the sound healers in Flores, we were interested in how the sound healing works, what it was good for but we didn’t feel any compelling reason to attend a session.

The Sound Healers were living in a boxy, beige van. They had traveled up from Argentina and were on their way to Mirador, giving sessions at towns along the way and having musicians join in and drop out of the group. At one point, they were a group of seven but are now at four – Vladamir, Izzy, Avi and Ju Ju. We were on our way the next morning to return to Rio Dulce. However, Jake mentioned to them that if they traveled to Rio Dulce to be sure and stop by the boat. So this weekend, Sonny, who works in the office, shows up at the boat with a guy in a long robe who looks like a cross between Jesus and John Lennon. He explained that they were looking for our boat and knew Jake from Flores. “Yeah, Yeah,” we say and we invite Vladamir aboard. Jake wasn’t home at the time so we chatted a bit. Vlad said they were looking for a place by the river to park their van so they could set up a couple of sessions while in town. We weren’t sure what to suggest but they ended up making arrangements to park here at Mar Marine and use the workout room for a couple of sound healing sessions.

They printed up some Sound Healing fliers and distributed them at a couple of local hot spots. Friday night was their first session. Jake mentioned to us that we should come. We were curious but hesitant. I said I was going just for the experience. I backed out. I said to Randall “You go” and he said to me “You go.” We let the starting time pass without showing up but Jake, who was participating for free, shows up at the boat in a final attempt at persuasion. “Hey,” he says. “They haven’t had anyone show up tonight. Why don’t you guys come check it all out? They are so nice.” So we went and were treated to a private session at a reduced price from some very, very nice people.

Sound Healing involves breathing exercises, massage and chakra tuning all accompanied by a number of eastern musical instruments. We were not familiar with any of the instruments so Vlad also spent time after the session to play and pass the instruments around. The breathing exercises were very relaxing and the massage was wonderful. To tune our chakras, Vlad used a stringed percussion instrument which was a predecessor to a piano. He would play a note and hum to the note a specific way for each chakra – ah, oh, eeeh. We would join in. 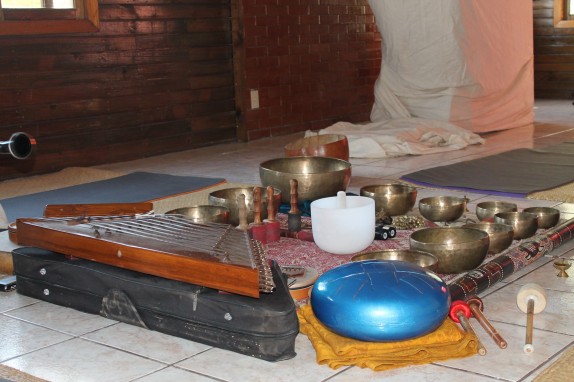 Also, there was a point where we lay on our backs and a Tibetan bowl was placed on each stomach. It was hit softly to start a vibration which resonated through your core. Also in this position, the Tibetan bowls were placed near our ears and periodically struck. The soft chime created by the bowls seemed to enter right into the head and resonate softly inside.

The following day, Lily interviewed the group about their travels and music. She has not had time to write up a summary but I will add it later if I can get it out of her. She is pretty busy these days now that the Marina’s owner is keeping her two grandchildren, Natalia and Isabella. Also, the Sound Healers had a nice little group show up for the following session. We are pleased to hear that since we know that we were a tough crowd to heal and play for. I am sure months from now, they will still be saying, “That family in Rio Dulce, I think they were a little reserved about the whole sound healing thing, no?” 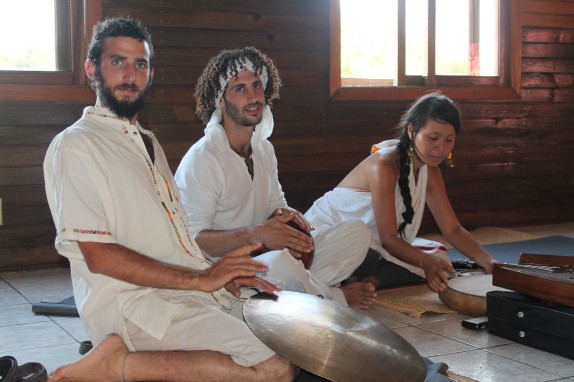 Izzy, Avi and Juju getting ready for sound healing session.

Freddy’s Friends Fun This Week
Livingston In A Downpour