You are here: Home › Eating Well With Friends 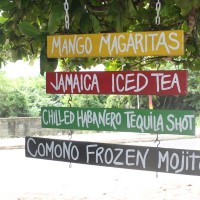 Well Michelle has been keeping us up past our bedtime. There is a quite varied and interesting world which emerges after dark that we tend to know little about so it is good to have her along for these after-dark forays. However, before the nightlife, we had a full schedule of Isla touring. Lily was so excited to get Michelle on the paddle boards with her. There are small yellow paddle boards and large white ones to chose from on the beach. Michelle asked which were the best and Lily recommended the yellow one – easier to turn, she said. Michelle grabbed one similar to Lily’s and headed into the water. She was in the process of trying to figure out how to get going when Eric called from the shore that the yellow ones were meant for the kids and she might find the adult boards easier to ride. So much for asking us for paddle boarding tips. 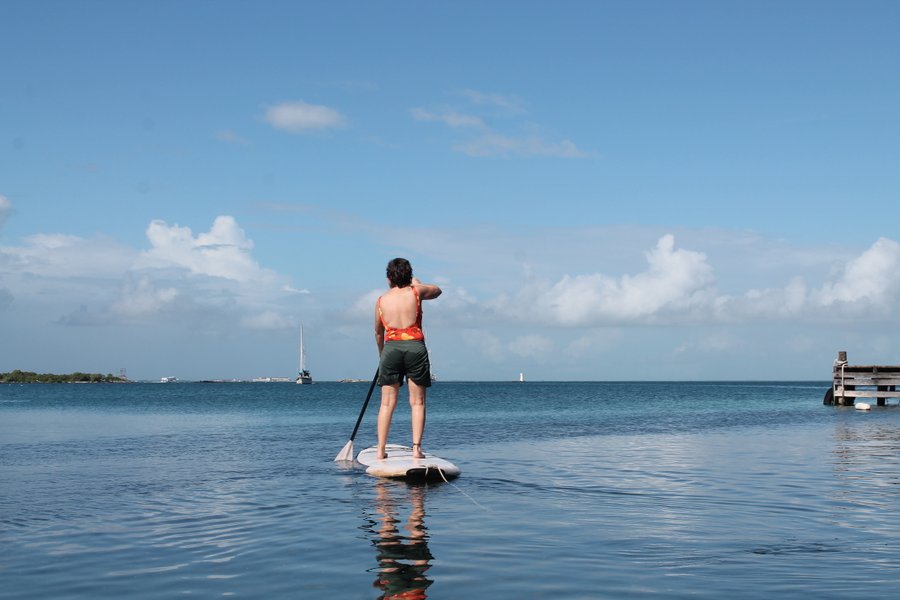 Michelle on the paddle board. 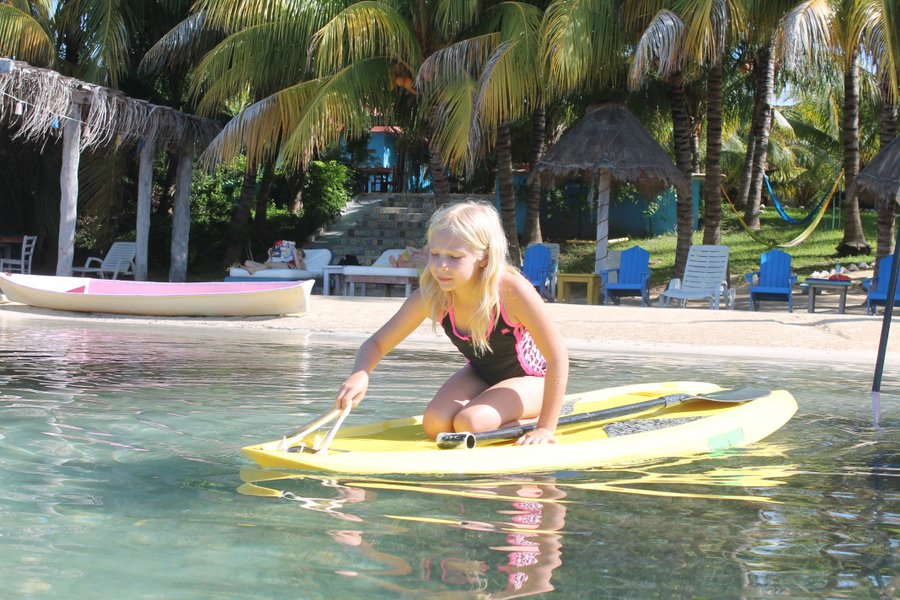 Lily on the kid sized board.

After playing in the water a while, we headed to the south end of the island for lunch at The Joint. We had a nice long lunch in the shade of the mangroves listening to Bob Marley tunes. After lunch, we walked down to the shore to see if there was any beach access but the rain started pouring so we didn’t linger. 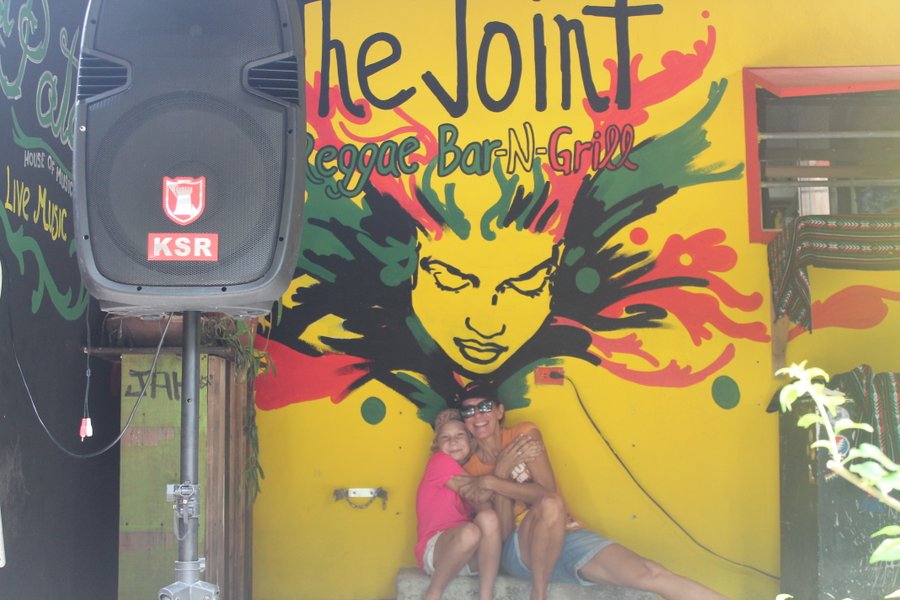 Lily and I up on The Joint’s stage for a picture. 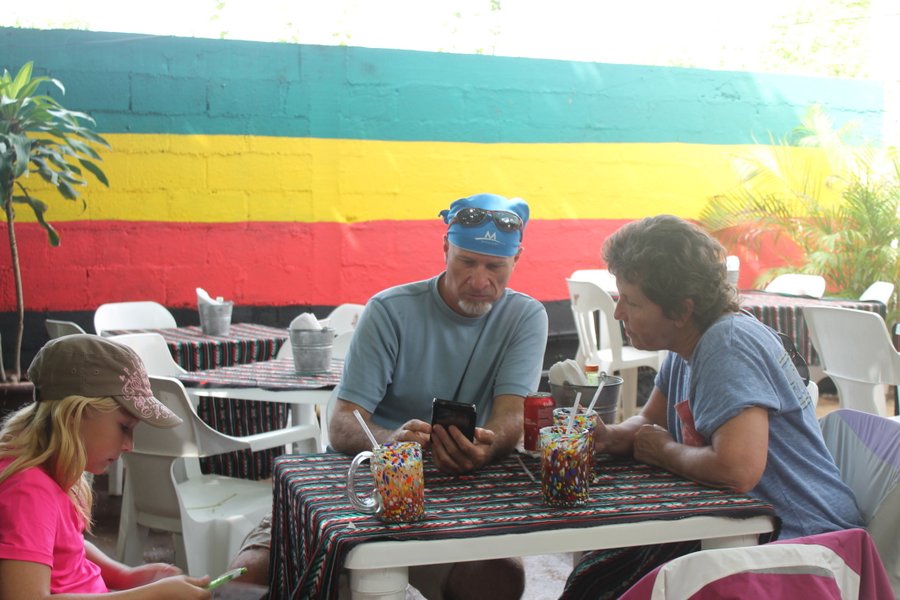 Looking at some old videos we have on the phone and drinking Bloody Mary’s.

The rain let up when we got back to the boat so Lily rejoined Penelope and Sebastion at the El Milagro Beach. There are so many good places to eat on the island but El Milagro was also cooking last night for any guests who wanted to join in. Felix and Julio grill up some fresh fish and bbq ribs which rival any meal on the island and we also like to watch them prepare the fish. The split the fish down the middle and spread it butterfly-style. The skin stays on the bottom but to top is spread with Achiote seasoning, tomatoes and red onion. They grill the skin side until it is charred and the lightly grill the seasoned side. Then the serving just pull off the skin, evenly cooked and delicious. 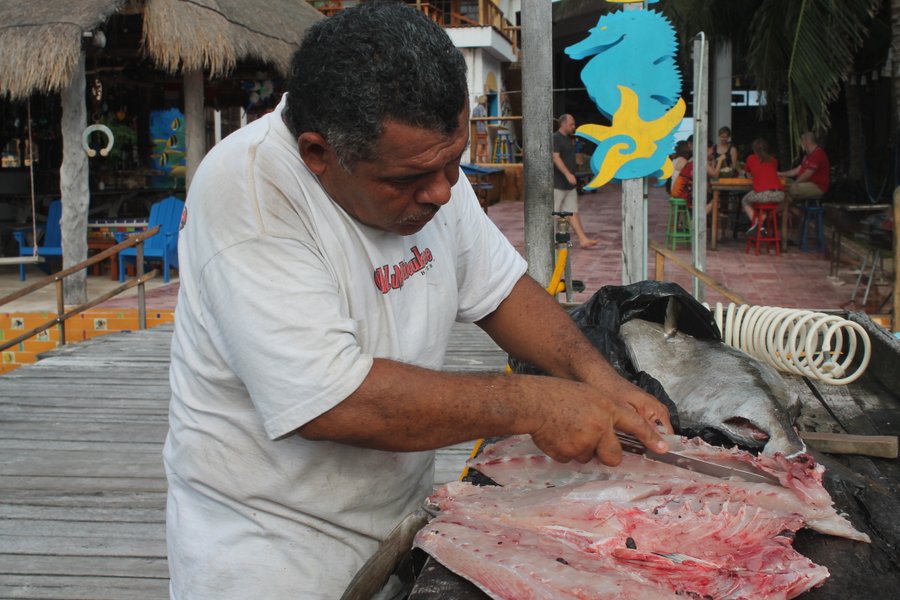 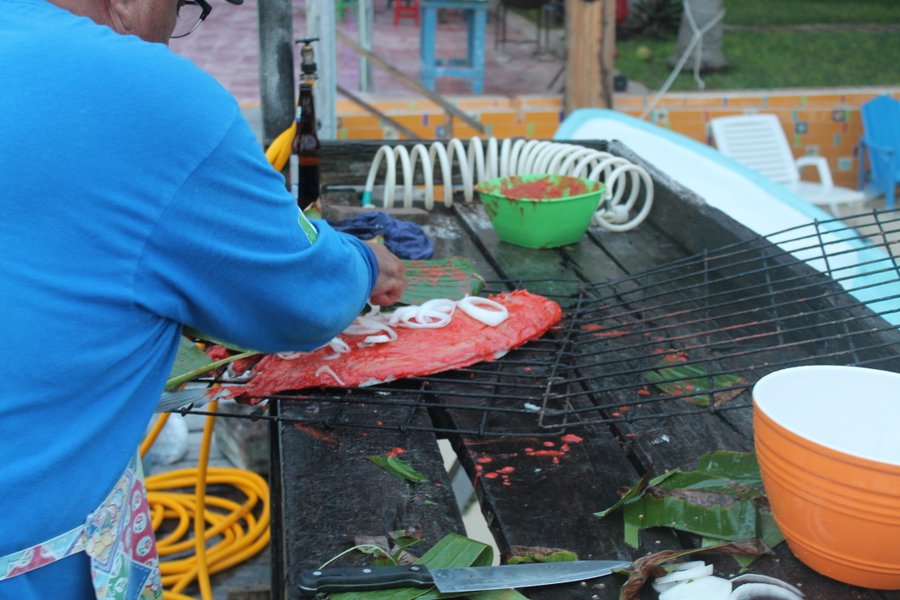 Julio spreading on achiote. The seasoning is so think the fish looks like a salmon when it is ready for the grill.

A wedding party currently has all the rooms here booked and they were all at the dinner celebrating the upcoming nuptials. We had a festive evening meeting some of the wedding party. Lily went off to watch a movie on Quartet so we talked late into the night about cruising with kids. They just traveled through Cuba so we got the latest of where to go and not go in Cuba. As we have heard, they said there are many American boats hanging out in Cuba, now. 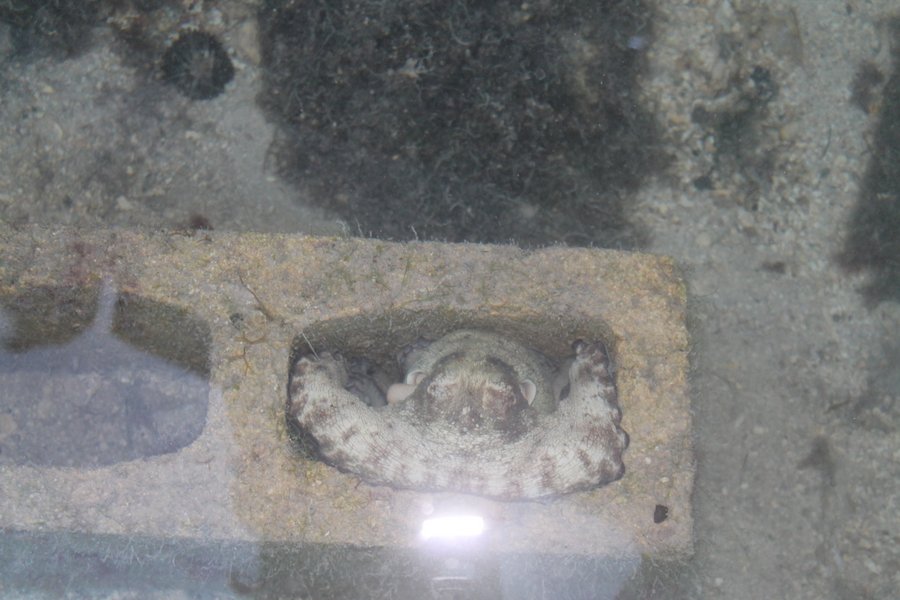 Octopus curled up in a cinder block underwater.

2 Responses to Eating Well With Friends