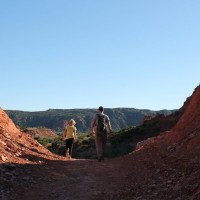 Yes, we said a sad parking-lot goodbye to Michelle at the Altus Arby’s on Wednesday. Michelle headed to McKinney to see our very good friend Vicki Redd. Randall, Lily and I headed west to Caprock State Park near Turkey, TX. We crossed the Prairie Dog Town Fork of the Red River with Randall singing the lines from Guy Clark’s song Red River:

And then the chorus builds up a little in tempo and pitch:

Both Guy Clark and Max Stallings really know who to issue burial instructions. Whenever I see a dry, windblown Oklahoma cemetery, I think of the Max Stalling’s line “I’ve dealt with drought since my very first breath. I’ll be damned if I’ll do it in death. I want to be buried where the grass is green.”

We arrived a bit late in the day but, since it was mid-week, available tent sites were a-plenty. We filled up the backpack with some trail snacks and drove further west into the canyon to one of the trail heads marked “steep and challenging.” I like it when easy little climbs are referred to as “steep and challenging.” We had enough daylight for a short hike which meandered through some wildflowers and prickly pears to the bottom of a ceder-covered cliff face. Here we started the “steep and challenging” part via a hard packed trail covered with a layer of slippery small pebbles and rocks. Lily and I filled up our pockets. No gold but lots of shiny brown rocks and a couple of possible shell fragments from the long lost Texas Panhandle sea. At the steepest areas, rock steps made from the native red rock has been roughly adding but the man-made trail blended in so well it was kind of pretty itself. We got about halfway up and spent a little while enjoying the view of the surrounding cliffs both bright and dark in the setting sun. 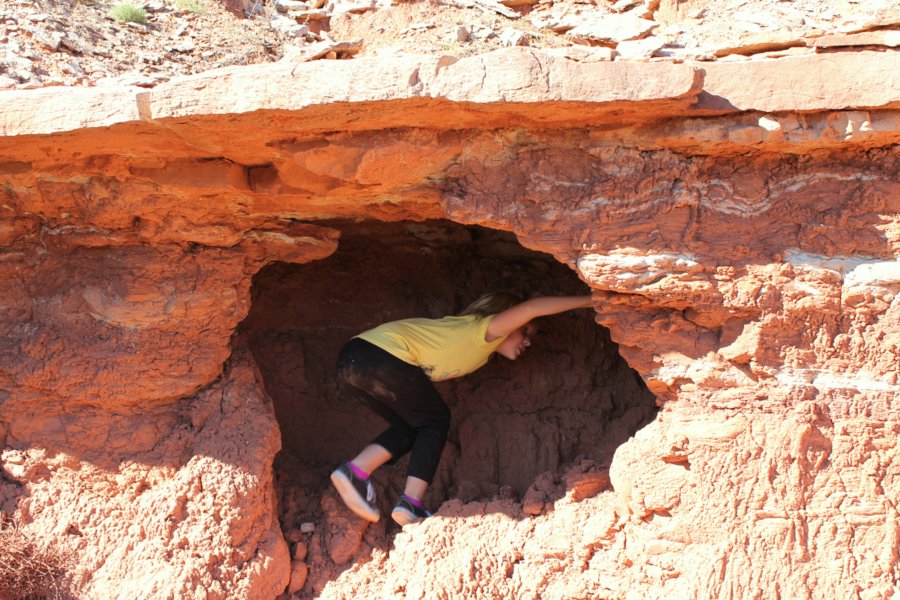 Lily checking out a little cave. 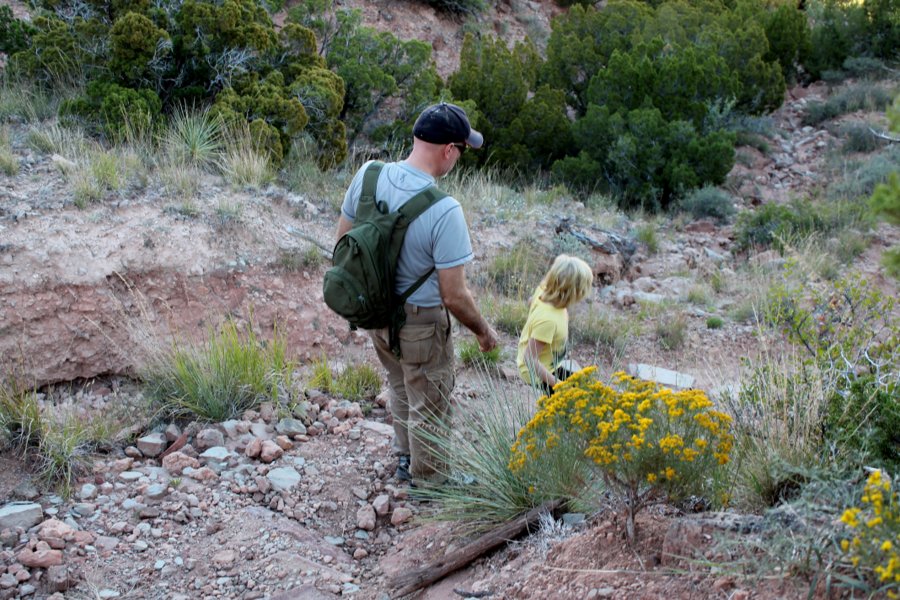 Slip-sliding down the rock trail.

Back at the tent site, we mashed garbanzo beans in a baggy with garlic seasoning (our camping version of hummus), ate it up with crackers and then hiked along the stream running by the campground. The stream was hard at work at more sculpting and the exposed walls were fascinating layers of red rock shot through with running lines of white chalky sediment. This would have made for some of the prettiest pics but I had not brought my camera down to the stream. We spent the evening wishing we had remembered a deck of cards or a book which all three of us might enjoy. Lily read a little of her Boxcar Children book out loud but couldn’t really get us interested. Heading out the next day, we got to drive through the herd of bison who live in the park and were slowly grazing along the main road. We had been given a park permit to hang on the rear-view mirror which both confirmed our all-paid-up status and displayed a picture of a bulky bison tossing a puny little human in the air. We remained in the car a safe distance as instructed by our park permit. A few eyed us but most kept right on grazing. Michelle called later to say she had made it to Vicki’s. Vicki was at her divorce recovery class. Apparently, she is the best student in the bunch and may be called upon soon to teach the class. Go Vicki! 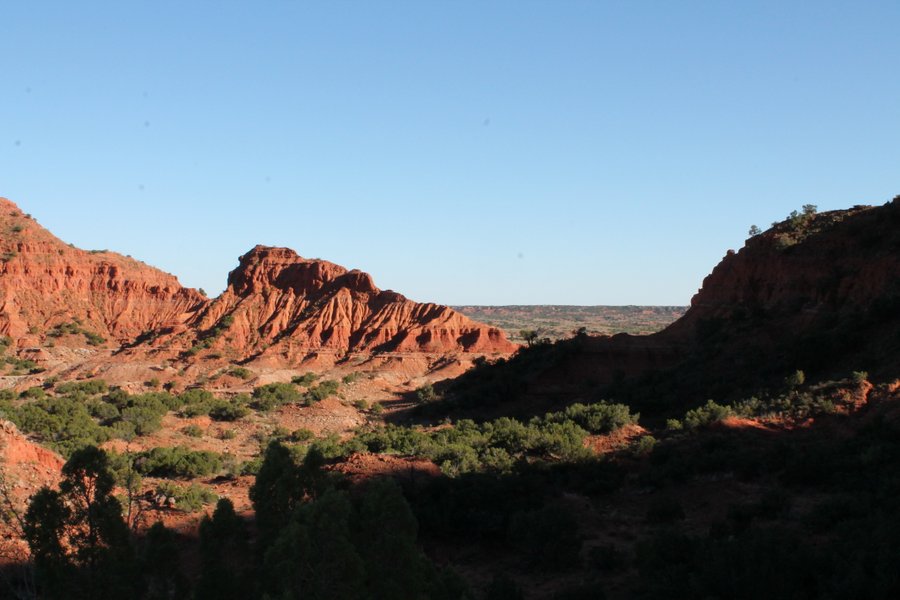 The shadows were getting a little longer so we decided to head back down. 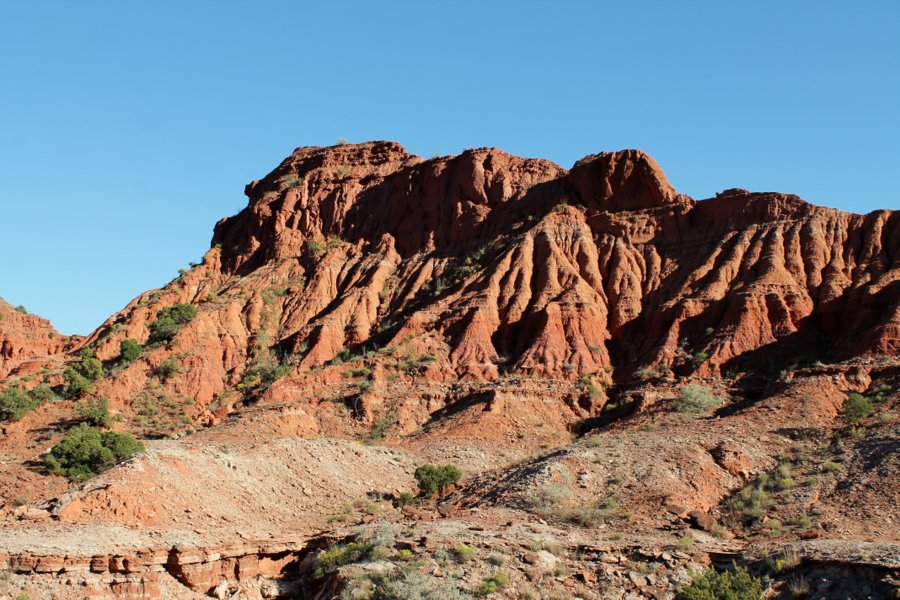 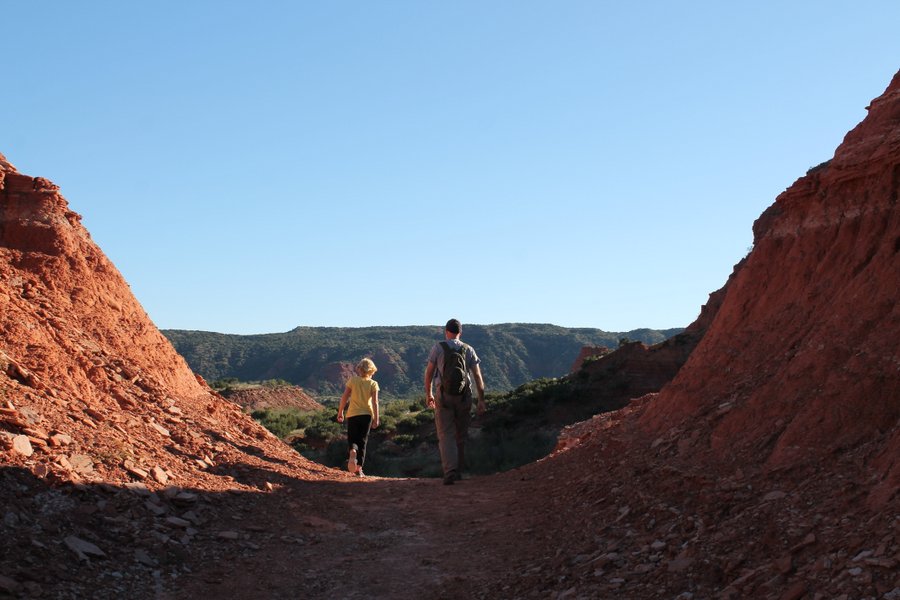 They did a lot of singin’ on the trail since Lily is practicing Lee Greenwood’s “God Bless The USA” for school. 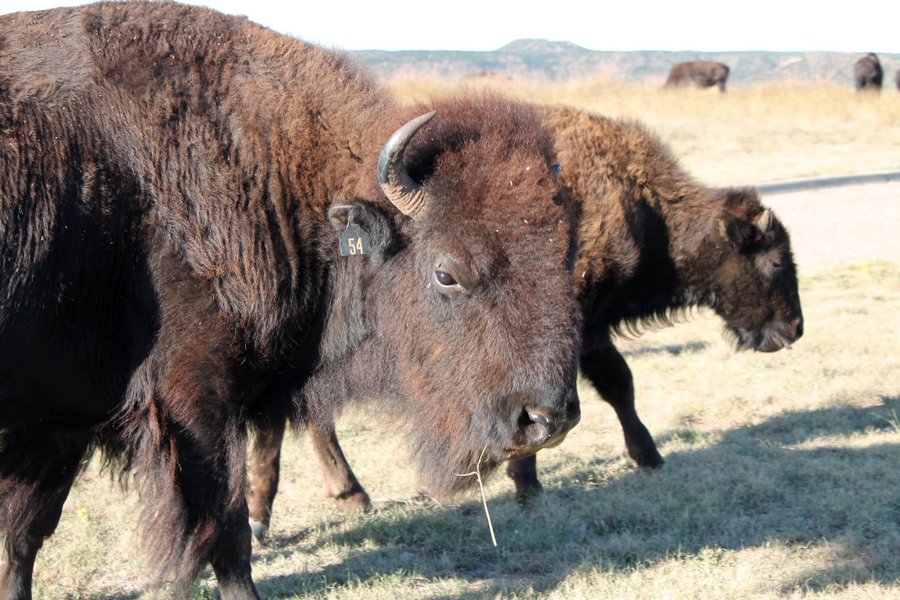 “I can toss you like a bunny,” he says with his intense gaze.

Quartz Mountain Hike
Climbing Up the Bleachers with All Four Grandparents