Randall mentioned to Jay that no matter where we sail, it always seems to be straight into the wind. So we gave him fair warning. Jay on his boat, Eula, sailed with us this weekend for our first overnight anchorage of Foxtrot. We figured we’d motor the first day since the route was mostly in a narrow channel down to Pass-A-Grille. We had sunny skies and a light breeze all morning as we followed Eula down the channel and under a couple of bridges. We made it to the Pass-A-Grille cut shortly after noon. We had planned to anchor Foxtrot and board Eula for a little offshore sailing. We rafted up and talked over whether it was safe to leave Foxtrot anchored in such a busy area. The area was swarming with fishing boats using all their horsepower to get somewhere NOW. As we swapped hull paint attempting to make plans, we made a quick decision to find a better anchorage. We headed for Boca Ciega Bay and anchored right by a beach, playground and the downtown Gulfport restaurants and shops. We spend all afternoon letting Lily play on the beach and playground and ended the day with some fish-n-chips at the local pub.

Sunday, we got an early start. We took the Pass-A-Grille cut and entered the blue green Gulf. The waves were just enough to make it fun. The motor boats, instead of being annoyingly close, dotted the horizon pleasantly and I reminded myself that if we ran aground, I would be waving my arms like all heck at one of them, knowing they like telling their friends how they had to save another dull-witted sailor from a sandbar. We killed the motor for about an hour of wing-on-wing sailing southwest to the main shipping channel. The weather report predicted a favorable change in wind direction that should push us all the way home. However, we turned up the channel into the wind, instead. There were two large tankers transiting the channel so tacking was out of the question. We motored along as both tankers passed us by, dolphins playing at the bow of the latter one. Next up was the Sunshine Skyway bridge. We were still hoping that we could pass under the bridge and sail from there. However, it would have required more tacks than we were willing to take at that point in the day. We motored up Tampa Bay and finally killed the motor on the last leg. The breeze got us up to 7 knots for the final hour of the trip. Jay caught up to us, still motoring Eula. Poor Jay, I thought. He has got to be tired!  We had been taking turns at the helm, fixing snacks and used the autopilot a little while when we both got tired of the helm. Jay had been at the helm the entire two days. We tied both boats up and Jay said he’d had a great trip despite motoring all the way. I think he’ll be ready to go again by tomorrow. We may decide, at some point, to only go the way the wind is blowing and see where it takes us. 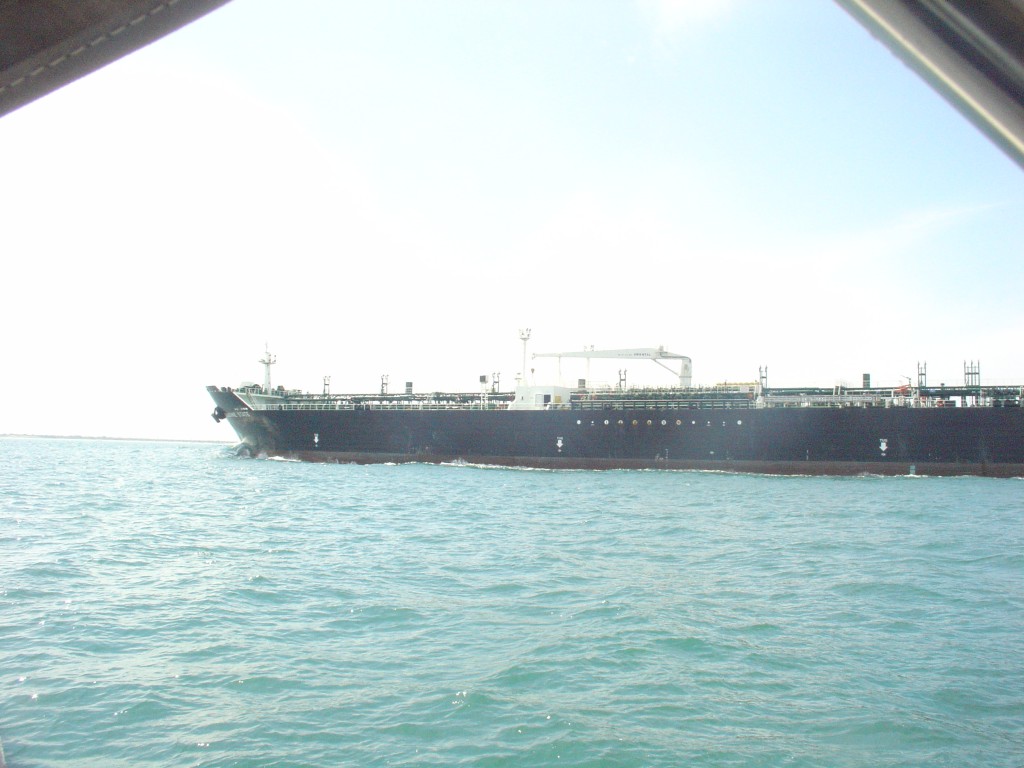 Giving the Big One most of the channel. 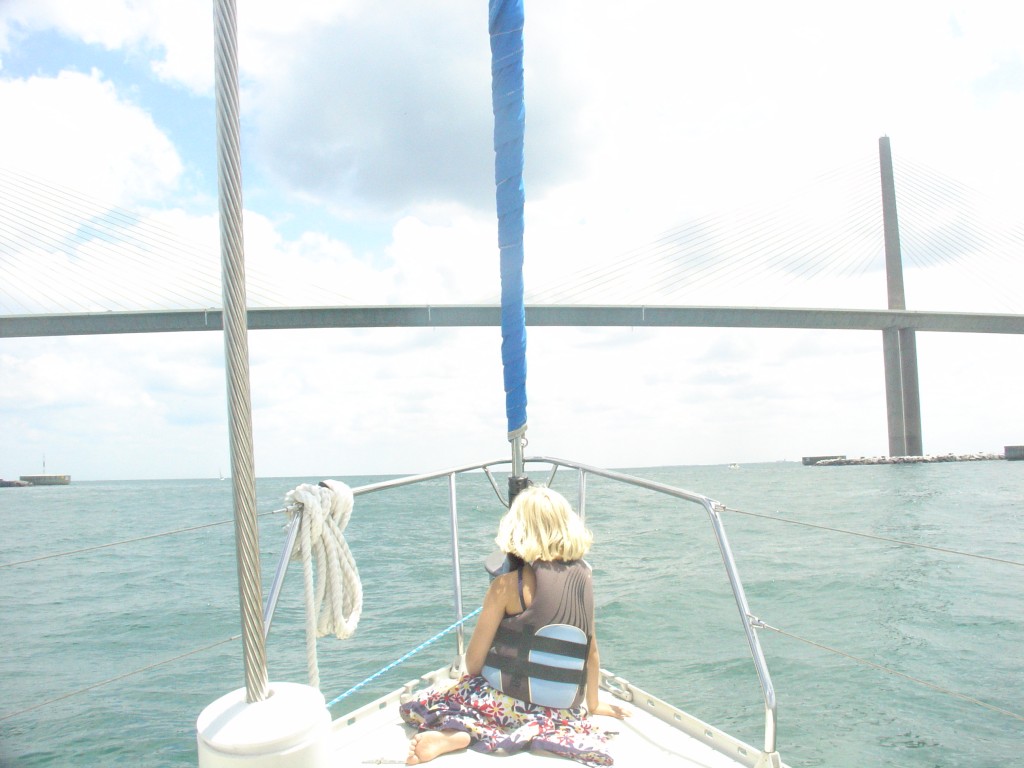 Lily making sure we fit under the Sunshine Skyway. I think we'll make it safely under. 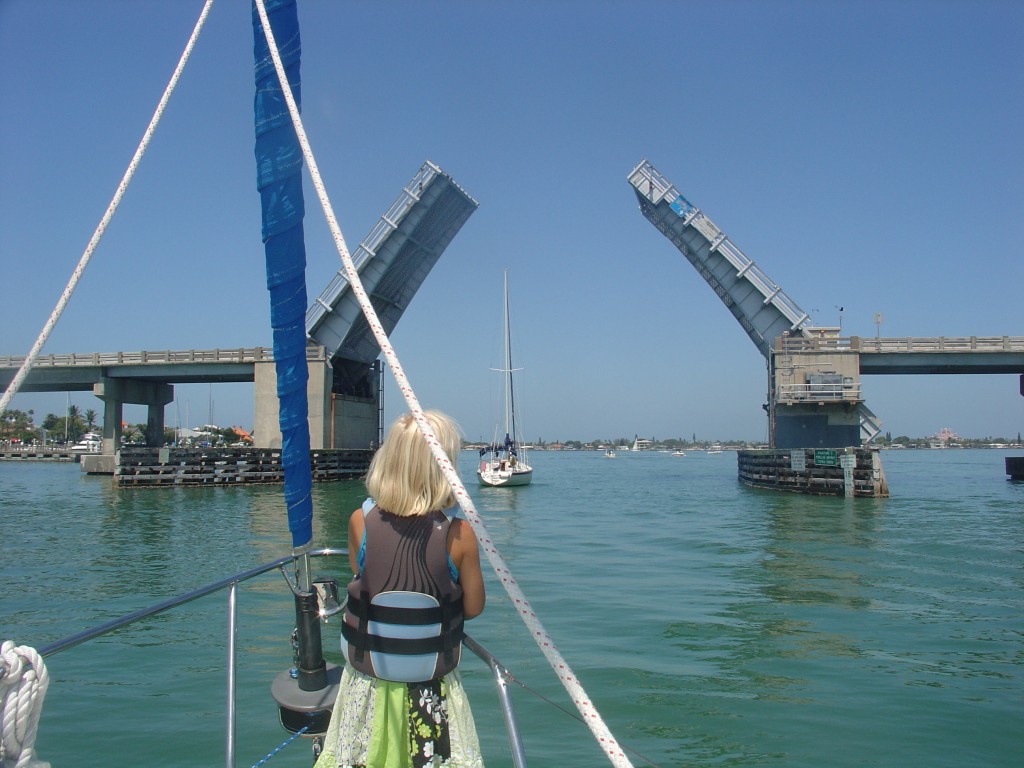 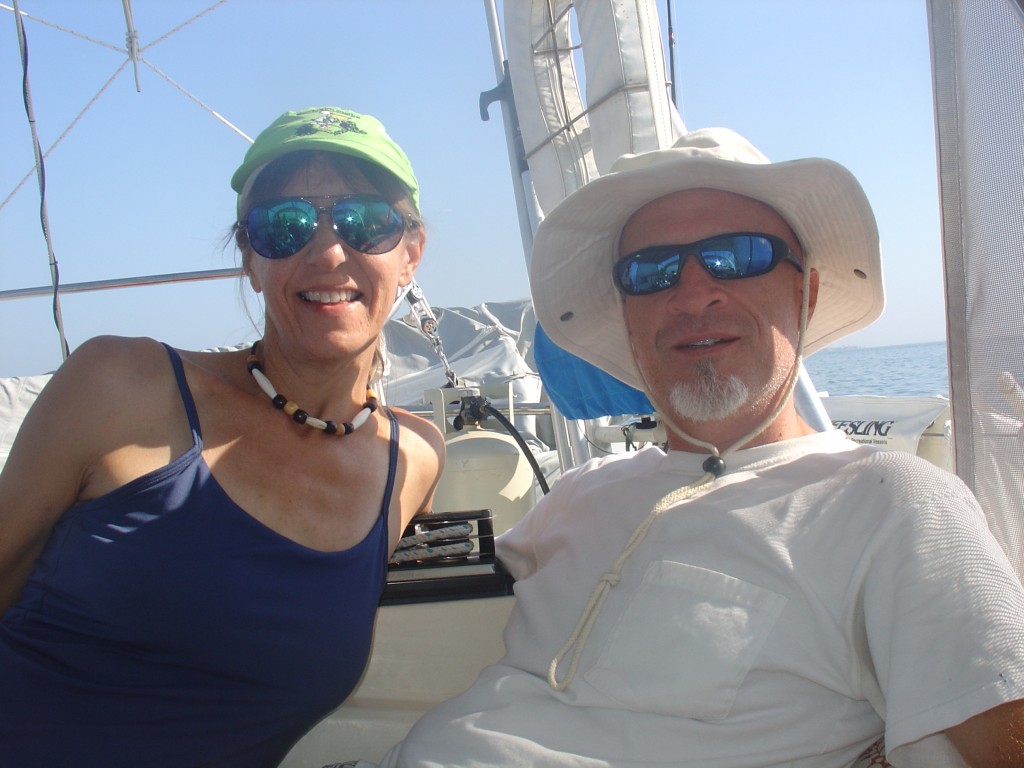 Lily took this of us.