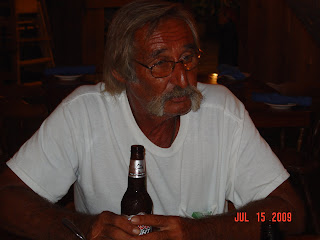 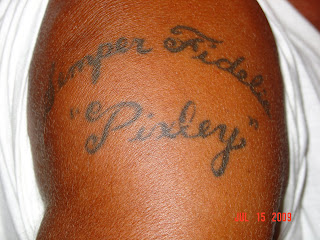 Larry Joe is an outlaw. What laws have been compromised, we didn’t ask. His stories were too enthralling to interrupt. Most of the time, you hear a stranger’s stories and must picture the characters involved. But Larry Joe carries a little photograph album in his back pocket. He pulled out the tattered little album proudly to show us his ex-wife and her husband, whom he is friends with, his son and daughter-in-law and two grandkids, Bubbette 1 and Bubbette 2. His dog was there and his previous inlaws too. There is also a black and white picture of a handsome young man with dark curls. Pixley was the only guy he ever fought naked and you don’t forget a fight like that, he says. The fight started in the military shower when Larry Joe called Pixley a Yank and Pixley retorted with all the Southern slurs he knew. The next day they went to Vietnam together with black eyes and bloody noses that they had given each other and, from that fight on, they were brothers in arms. They watched each others’ back. They shared their fears and lived out those fears daily. Pixley never came home. He is buried in Franklinville, NY, a place Larry Joe would normally have had no reason to see, it not being in the south or on the coast. Larry Joe goes there every year on Memorial Day. He sits by Pixley and drinks until the local cops come by to check on him and suggest that he’d better not drive. They offer him a ride. He accepts because he likes to tell the people of Franklinville NY about their soldier. I’ll never forget, he says. Just think of those guys. Just remember. They didn’t want to give their lives. Their lives were taken. And we are here.