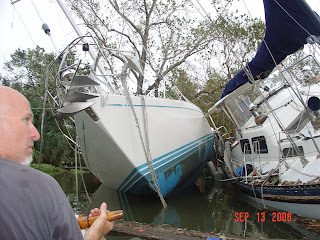 A couple of years ago, Randall and I were walking the dock to our boat and passed a boat with a hailing port of Drumright, OK. Her owners, Jerry and Debby Brichacek, were trying to get the farm in order so they could sail south. We swapped “How a couple of Okies got here,” stories. We soon discovered we had similar plans – a Gulf crossing hopefully to Mexico and beyond. The inevitable “Maybe we could leave together” came up and we both hoped that we had found a buddy boat to sail with.
Then Ike tossed Czech N Mate up by the Watergate Marina bathrooms. Overnight, the question went from “when to leave” to “will she float?” Throughout that September, hundreds of boat owners struggled with the salvage vs scrap dilemma. The cost and extent of repairs varied greatly from boat to boat but were, to all, demoralizing. Jerry was eager to Czech and Mate back in the water. He decided to truck her home to Drumright for the work. So began the trip to Oklahoma where, between the plowing and planting, boat work could proceed.
Rigging was replaced. Parts were hunted done including a hard-to-replace Hylas toe rail. The chunk from the keel was repaired. Scratches were sanded and coat after coat of paint went on. Jerry took a break from the activity last June to crew for our Houston to Pensacola passage. Finally, he is leaving too.
Fair winds, Czech N Mate! You’ve got a great crew. I’m sure they’ll do anything you ask. However, you might consider announcing ten lashes for the first mate to whine about the cold. Randall seems to think sailing is a March – September sport. And provision a little extra on account of Michelle. She’ll also want lots of baggies so that no left-overs go uneaten.
Have fun!