Around noon on St. Patrick’s Day, Jake put out there the idea that we should get off the boat once more while in the Party Capitol of the World. It had been a cold, rainy morning so he did not get a “Yes Indeed!” from anyone but Lily. Still, the aged and infirm parents were somewhat tempted – Randall for the beer and I for the missed French Quarter bookstore. We bundled up for French Quarter Visit Two. The William Faulkner bookstore resides in a beautiful old Victorian home just next to the St. Louis Cathedral. The online pics of the home were intriguing and I was hoping to get to see the entire house. However, it is still a private residence and only the two front rooms served as the bookstore. We browsed, elbow-to-elbow, with a couple of other browsers under the constant attention of the alert bookseller/protector. The bookstore had a small selection of local authors, signed copies and old, leather bound first editions so it wasn’t a place to get coffee and read the first chapter of something.

We roamed up and down a few more streets and got on the outskirts of a dogfight. We had been discussing the typical New Orleans Streetnik which is a youngish person wearing well worn earth tones and sporting a large backpack. Many carry instruments and most have a dog as well. A few of them panhandle but most appear to be there for the street life experience. We wanted to find out where they sleep and what the deal is with the dogs. It is so prevalent it makes you think there is a Street Outfitter Store somewhere with backpacks, stocking caps and assorted muts. You buy all three or you really aren’t legit. We ate at an old place called Sbisa’s. They occupy the ground floor of a really old four-story building. The waiter invited us to look around since their building is one of the stops on the Haunted New Orleans tours. They are renovating the other floors but the creaking uneven floors, chandeliers, old woodwork and narrow stairs gave it much the haunted house feel. A small attic window at the top overlooked the Mississippi and was completely open to the elements with no glass or screen. I lifted Lily so she could peer over the short length of patchy black roof to the street and lower roofs below. It felt a little like the old wall itself might give way if you leaned in on it. “Put me down. Put me down,” Lily demanded.

Lastly, Lily insisted on a haircut while we had a day off from traveling. She just can NOT keep her hair in any kind of manageable state while underway. I had been putting the haircut off until we got somewhere with a SuperCuts or something. She pleaded so bad I whipped out the scissors and started cutting. She was so happy. Here are some pics of the New Orleans skyline and Mississippi bridge we took coming in to town as well as Lily before and after pics. 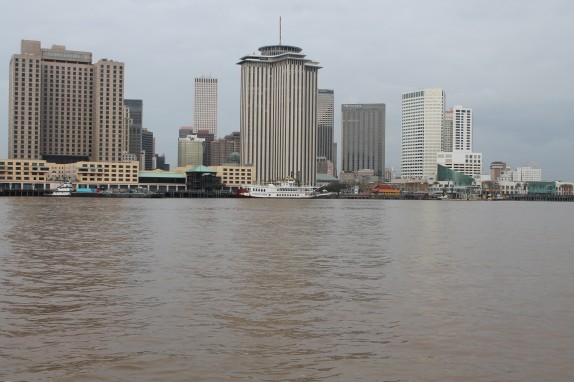 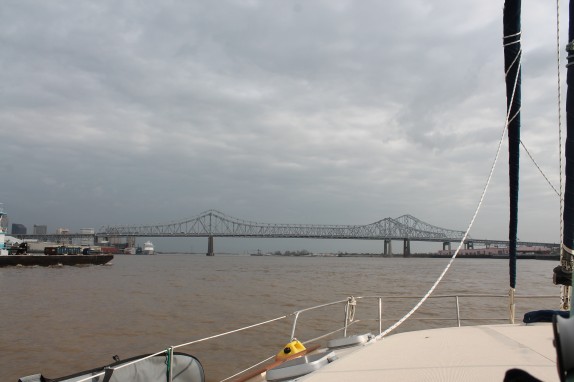 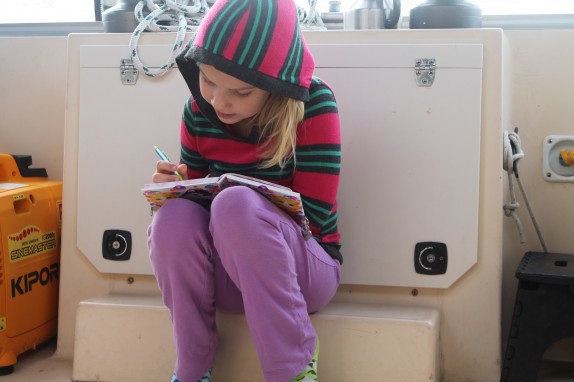 Lily writing in her journal with hair tangles tucked under hood 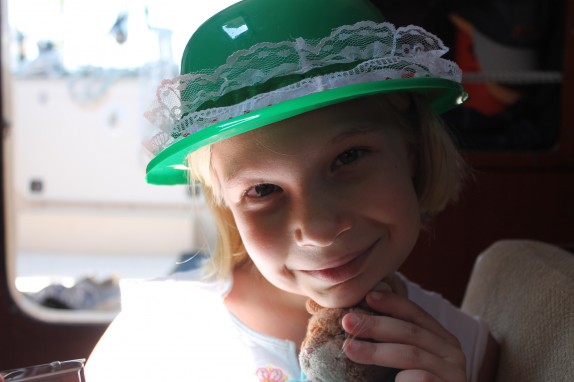 We left New Orleans early Tuesday for a long motor to Cat Island in the Mississippi Sound. We pulled in as the sun was setting. There were two other boats – a sailboat hard aground with no frantic owner in sight and a trimaran. I wish we would have dingied over to the grounded sailboat but it was dark by the time we were anchored.

We hopped offshore from Cat Island and passed by Pensacola in the night, heading east. We got to sail a few hours put mostly kept the motor going. We caught two fish which look somewhat like Spanish Mackerel but also look like the Black Fin Tuna pic on our very small fish chart. We later determined it was a Little Tunny. We pulled in to Port of St Joe’s at 4 a.m. We are spending a day doing laundry, getting fuel and cleaning up the boat. We plan to leave in the morning via the ICW into Apalachicola Bay and then sail offshore to Tarpon Springs or St. Pete. Everything in Port of St Joe looks newly built. We are taking a little walk later so will hopefully get a few more pics. 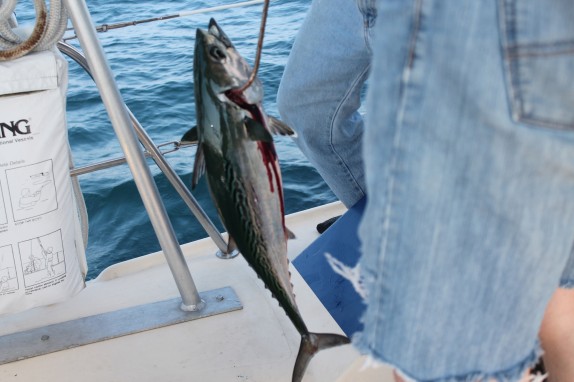 Got this one through the eye with the gaff. Note the squiggly lines running the length of the fish. This is throwing off our ID’ing efforts. 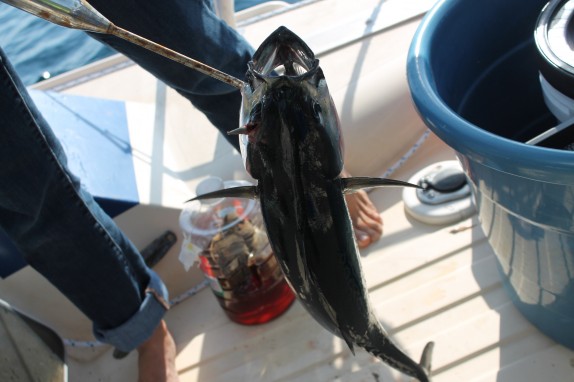 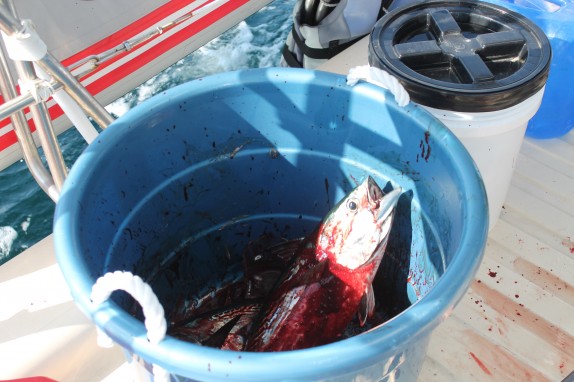 Where does all that fish blood come from? It was a bloodbath on the back deck. 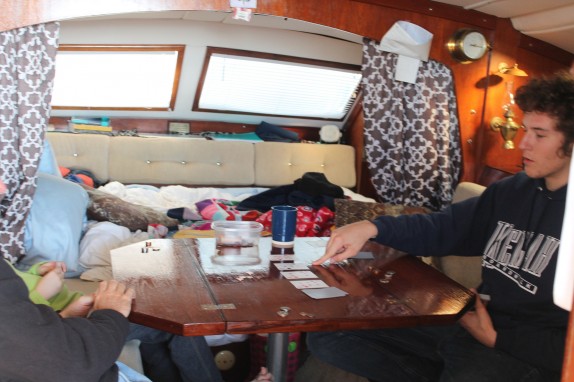 Randall, Lily and Jake playing five card draw while Tammy is at the helm. 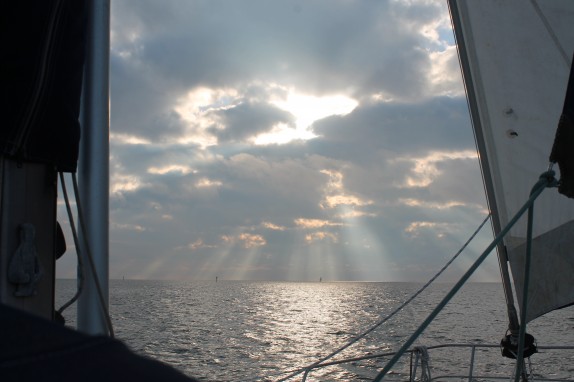 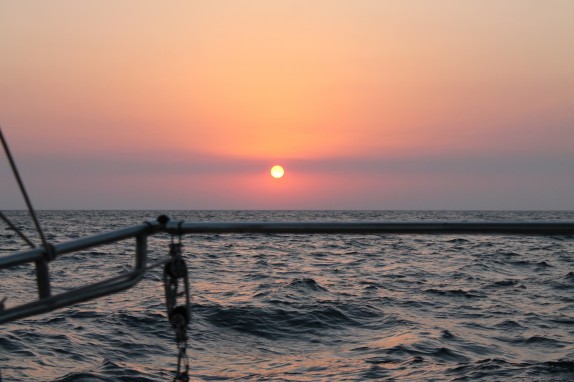