You are here: Home › Muddy Mess 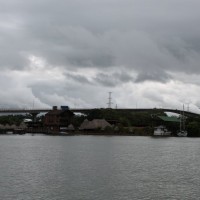 On Wednesday, we notified the Ram Office that we were ready to go in the water. They checked the travel lift schedule and wrote us in the 11 am slot, the third boat move of the day. A light rain fell Thursday morning and the travel lift finally got Boat 2, “Sweet Melissa,” blocked up and off the slings. We stood around softly singing “Sweet Melissa” and watched the travel lift creep across the yard to Foxtrot. It was 1 p.m. – about right on time by Guatemalan standards. The rain was getting a little more steady but really, what can stop a travel lift? We figured not much. Randall and I sought out shelter under the hull of one of the boats blocked up near us to watch Foxtrot get situated for the short ride. We watched as the yard guys threw a couple of boards into the muddy ruts the lift had previously grooved into the unpaved upper yard fairway. The ruts looked quite deep but the travel lift wheels are about four feet in diameter so we settled in to watch the lift crawl through the slough.

The lift got Foxtrot airborne and made a little turn to head through the rain down to the water. The front wheels churned slowly through the ruts, splashing a little water out of the river that was forming in the road. The lift inched forward until the back wheels met the ruts and down went the massive tire halfway into the hole. And there it began to spin. And sink more. And spin more.

The four-man lift support team grabbed more boards to strategically place for and aft of the buried tire. The boards splintered, split and slid away. Bigger boards were brought over by the tractor. They were angled into the mess. No traction. More rain. The guys began to grab some of the large rocks which lay around the yard and thrown them into the hole. No traction. More rain. They got on their hands and knees to more strategically jam yard debris under the tire. No traction. More rain. This went on for a couple of hours as the rain got heavier and formed a now rushing river right under the boat. Finally, they blocked up Foxtrot so they could gun the engine on the lift a little harder. The previous thrusts had been sending Foxtrot rocking in the slings and, well, we were right there watching so they had to handle Foxtrot gently. However, even minus the load, the lift stayed firmly buried. Still, the guys continued with the boards, the rocks and gunning the engine. As the workers started streaming past on their way home for the night, the crew came over with the decision – “Amigo! Manana.” They either think you know every Spanish word or they think you know two. Ha. Anyway, we understood the meaning. 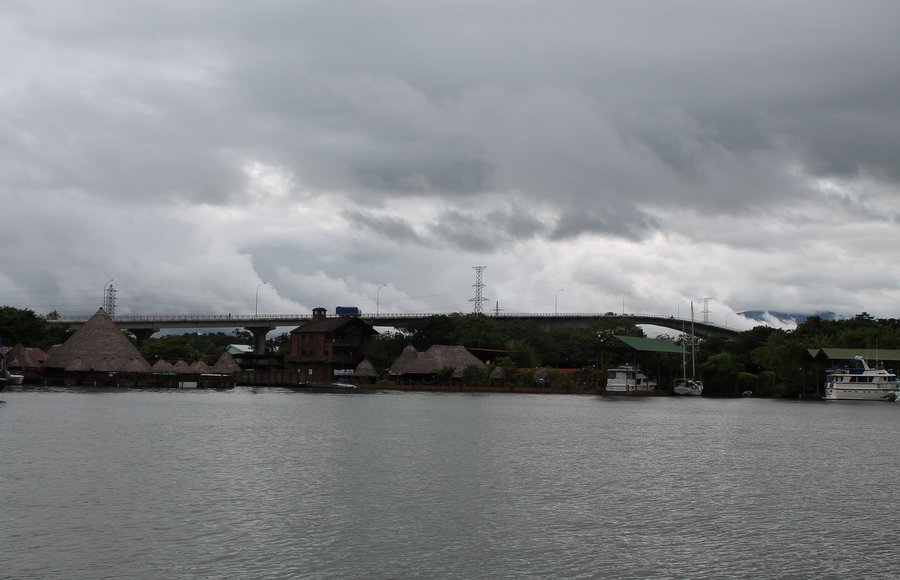 Cloudy skies remain over the Rio.

Randall and I walked over to SV Yollata in the pouring rain to collect Lily. Scott and Tracy handed out ice-cold Brahva and commiserated. How long might we be there? We all wondered. Rain was forecast for the rest of the week. Scott thought we should lobby Ram for use of the on site marina lodging. Tracy started burritos. We sat and talked several hours while the rain poured on.

We returned to Foxtrot and spent the night listening to rain thrum the boat deck. However, sun lit the skies the next morning. The guys were back at 9 to give it another try. Lily and I headed to the lounge to do homework and Randall came down a couple of hours later with the news the boat was headed to the water. We were bobbing pleasantly on the Ram dock by noon. We are on the far Eastern side of Ram’s docks so the wind is a little blocked by the motor yachts. Our view, too, is limited to the small El Relleno cove but we are happy to be here, nonetheless.