You are here: Home › Saturday Night Party and Sunday Sports 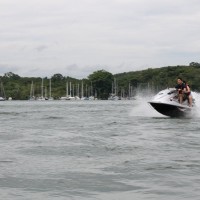 We had a fun Saturday night at a Nana Juana Bon Voyage Party for Scott, Tracy, Will and Molly. About 30 people gathered to toast the boat which has managed to be so much to so many.  They have been always-generous friends, beguiling storytellers, energetic marina managers and the absence of their cheery Aussie greetings each day will leave Nana Juana a bit less family-like. Even Will and Molly are expert greeters each morning.  They are heading Yollata in the general direction of Australia but are giving themselves a year to get there. We talked through the night about these partings which occur so often among sailing friends. It may be many years down the road but there is the lingering thought that it would not surprise you at all to bump into them again. Well, it you continue to frequent rowdy sailor bars or far-off, hidden ports of call, that is. 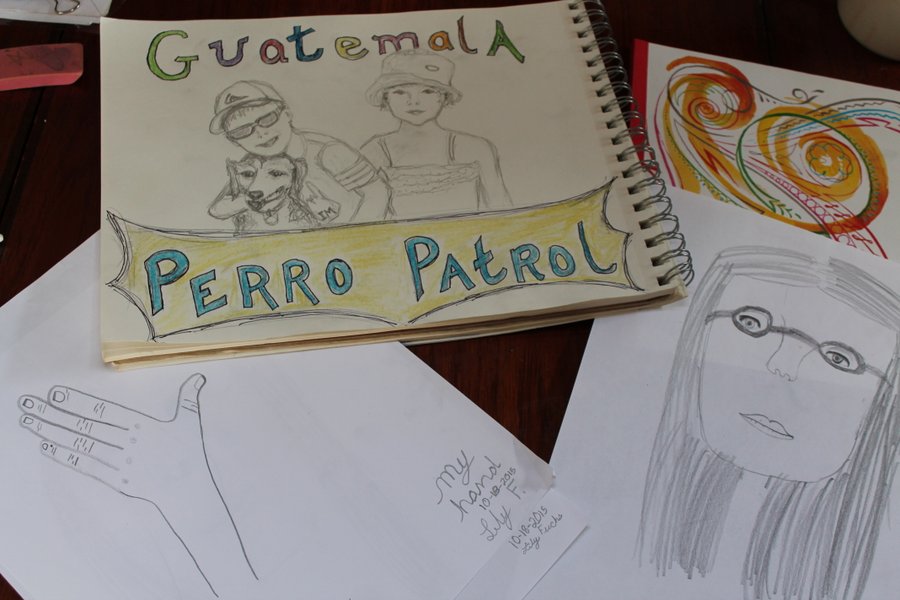 I didn’t get pics at the Bon Voyage party but Lily and I drew today and I took a stab at drawing Will, Molly and one of their dog-walking clients.

The river has been busy all weekend and wakes collided all across the water on Sunday too. We decided to add ours to the roiling water and took a little dingy ride. Ok, we failed to make a wake but we did throw up a splash or two. We headed first to the bridge to check out the source of the whooping and hollering. As we suspected, the bungee jumping rig was set up and a large crowd was gathered all along the bridge railing to cheer each jumper over the edge. We watched several take the plunge.  This is one of the many things we love about Central America:  You aren’t arrested and thrown in jail for bungee jumping off a bridge. 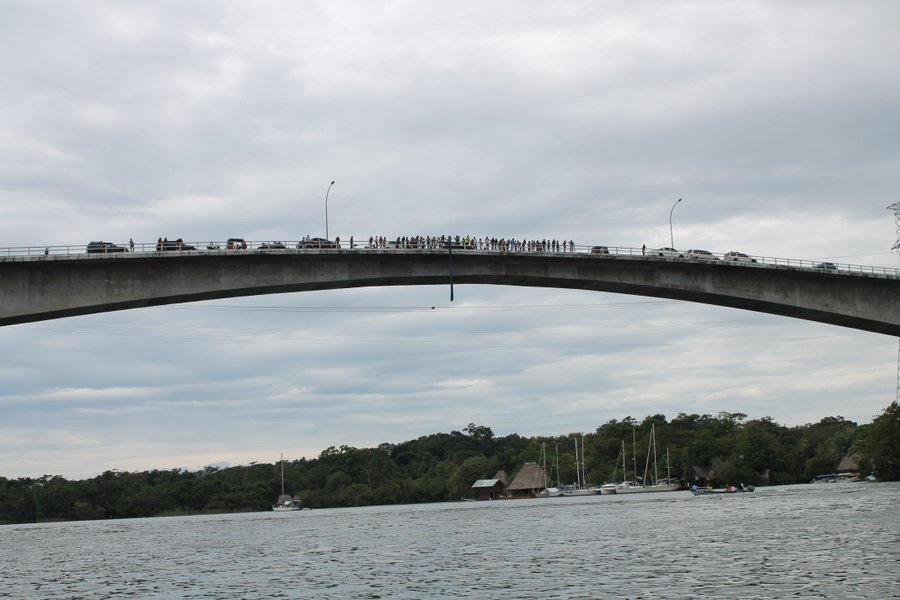 The crowd is evident in this pic. Cars, too, get into the act with lots of honking. 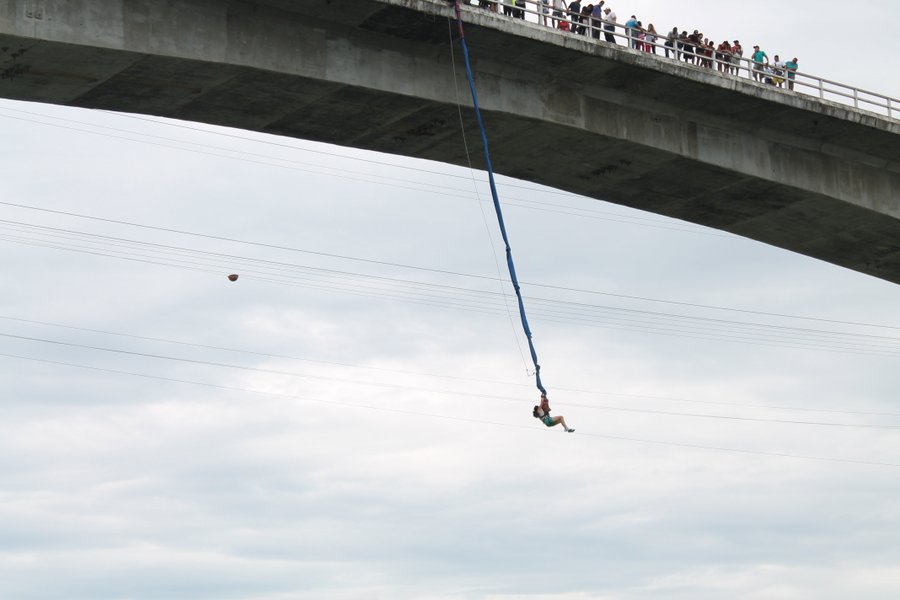 She seemed to take a few minutes to think about it and then took the leap. It looks a little painful, like a human yo-yo.

We headed over to take a look at the local marinas.  Tortugal, Tijax and Monkey Bay all look as full as ever.  Business seems brisk.  There were plenty of water sports to watch along the ride – jet skis, wake boarding and the big 65-foot yachts – speeding up and down. 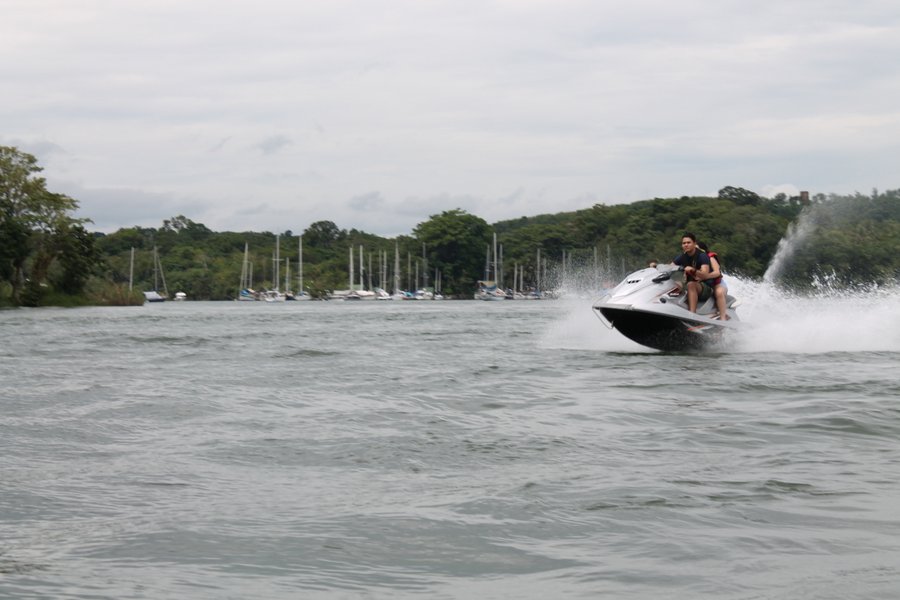 Hold on tight! Lily thinks this looks a little superior to our ride. 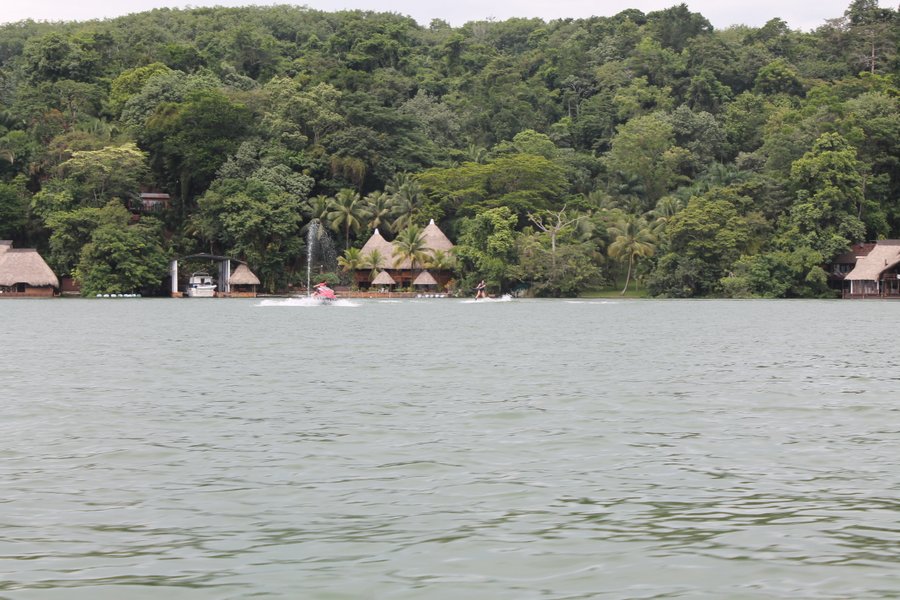 Wake boarder in the distance. 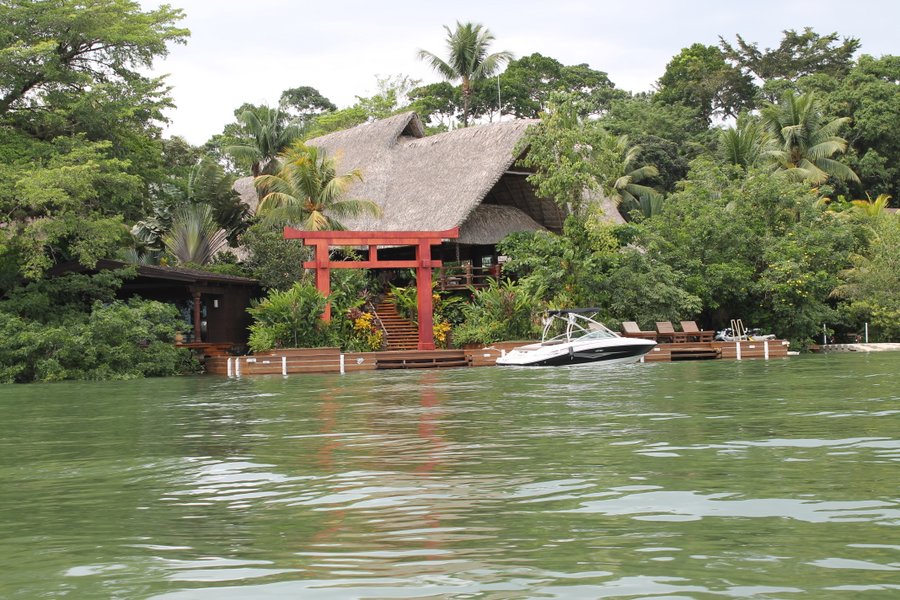 We finally found the little waterway that leads away from the river up to Casa Perico.  Casa Perico is one of the restaurants we want to try before leaving.  They are known for their pig roasts.  Lily groaned upon hearing the words “Pig Roast” – still a little traumatized from gorging ourselves at the Roatan Yacht Club Pig Roast we attended back in February. 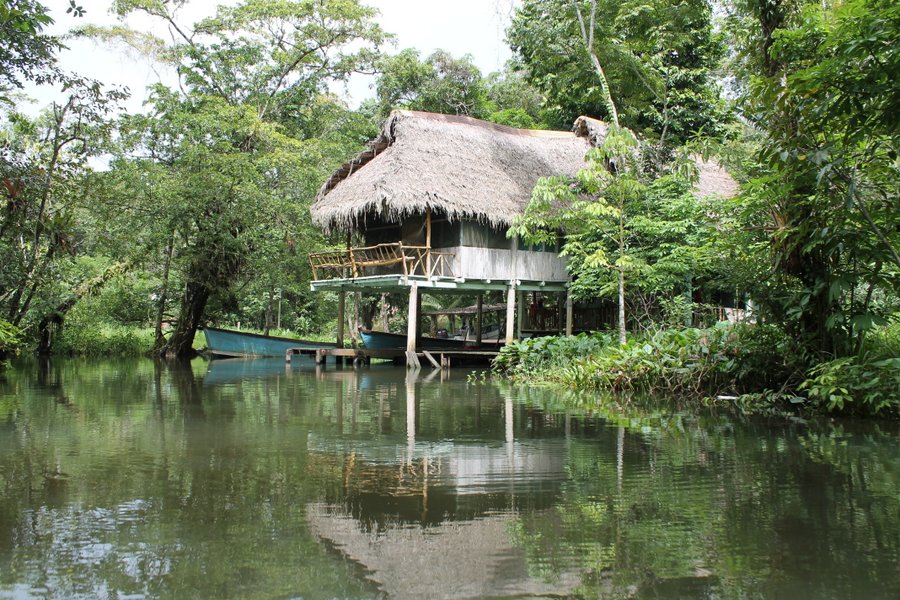 Waterside dwelling tucked back into the jungle. 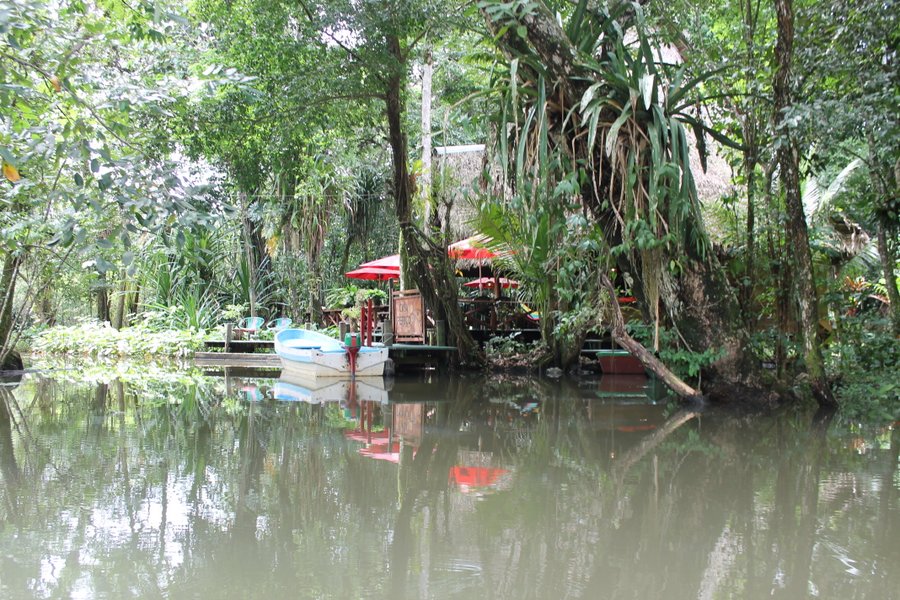 We didn’t stop as it was the wrong time to undertake the Pig Roast Challenge. We turned back homeward and Randall paused in the river to add gas. There were comments of praise on the outboard running really great. We got back underway and about two minutes later the engine died. Restart attempts rendered not even a little hopeful purr.  The three miles back up the river to the marina looked daunting, but we began to row.  The sun, which had previously been tucked behind clouds, came out with full force.  We took took turns and discussed waving a passing boat down for a tow.  However, we felt we were making decent progress.  We paused for a bit to examine our oar locks which were about to come unglued from the dinghy. They might not make it the whole way. As we were wallowing, a launcha with three fisherman pulled up their lines and headed our way.  They offered aid and we accepted.  They towed us to the fuel dock beside our marina where we treated them to refreshing drinks and ice cream.  Back at the boat, Randall cleaned out the fuel line and had the engine back in shape in 30 minutes. While he worked on the engine, he glued the oarlocks back into place. We should be good for some upcoming trip back down the river to gorge on fried pig and plantains. 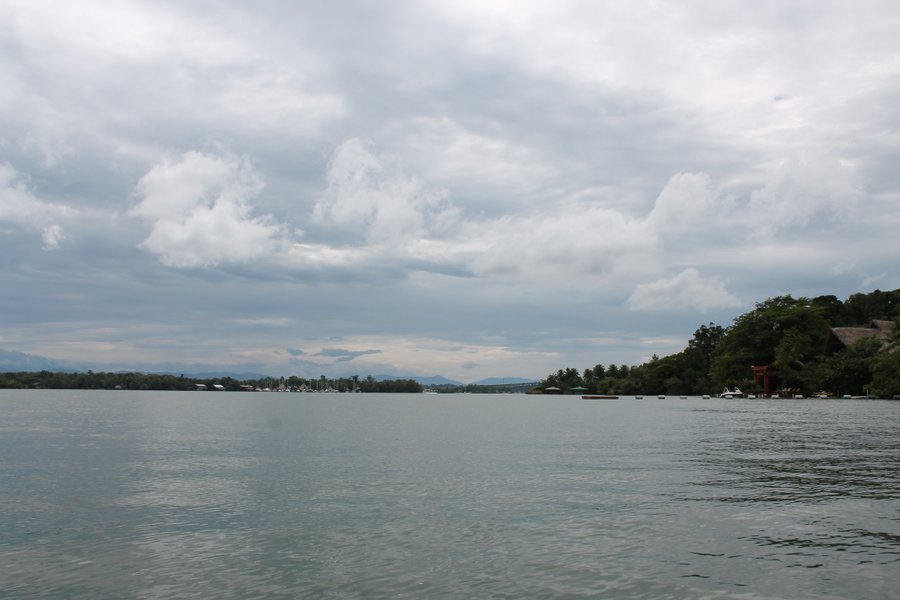 A look at the length of river we motored down and rowed much of the way back. 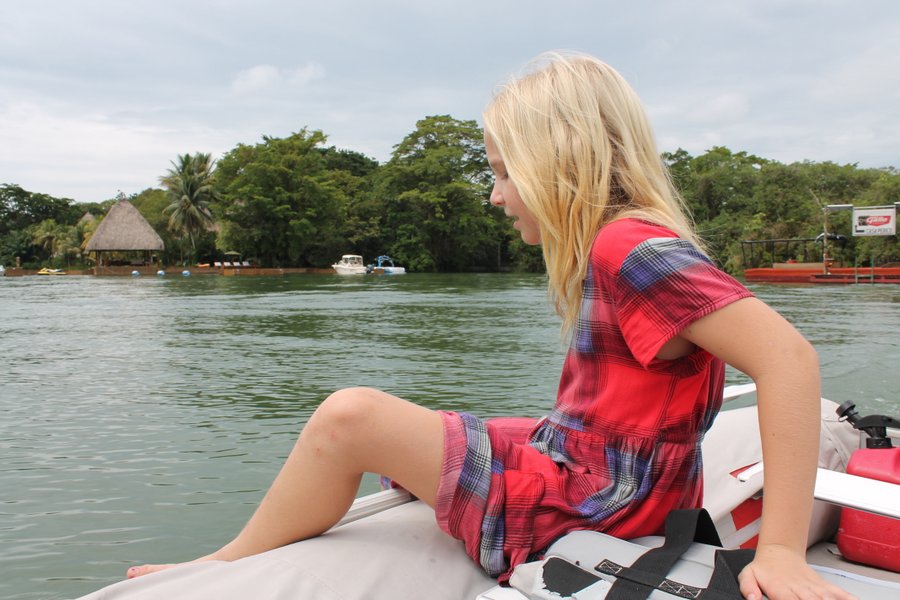