One thing we can count on about spending time with Michelle is that it also involves meeting many new friends. It is just one of the many things everyone loves about Michelle. We eagerly awaited her arrival yesterday. We were excited to see her and we, being the country bumpkins we are, were also worried about her flying solo into a city known among crime reporters and credit card customer service representatives as “the murder capital of the world.” (Michelle didn’t find it amusing that when she called to check about using her credit card and ATM in Guatemala and Honduras that the rep wanted to make sure she knew what she was getting into!) 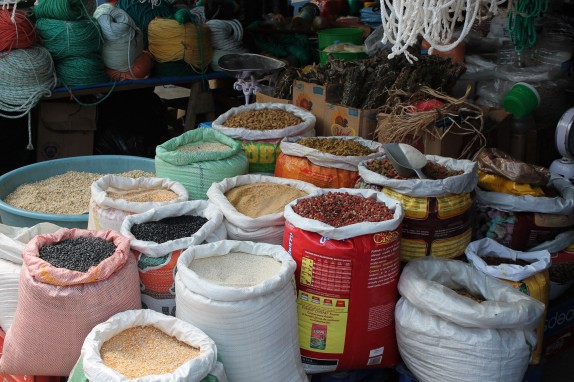 Many bulk items for sale at Fronteras

Mostly because of her unwieldy luggage, Michelle opted out of a bus ride to the Rio and decided to make last-minute arrangements with a private driver that she and Elda had ridden with when they were here a few months ago to bring Big Fun back to Kemah. Oscar was to pick her up at San Pedro Sula airport and drive her straight to the Mar Marine parking lot, crossing the Honduran-Guatemala border on route. It was a three hour drive which was notorious for taking longer due to numerous police checkpoints (6 they passed through in 3 hour drive) and customs processing. When they finally got there, Michelle texted me from the parking lot: “We are here but I want to take Oscar out to eat.” We had spaghetti sauce simmering in the galley and was waiting for her arrival to start the pasta so I texted back “We have plenty of spaghetti. Bring Oscar.” And so we made the first met-Through-Michelle friend of the many new friends we will make while she is here. 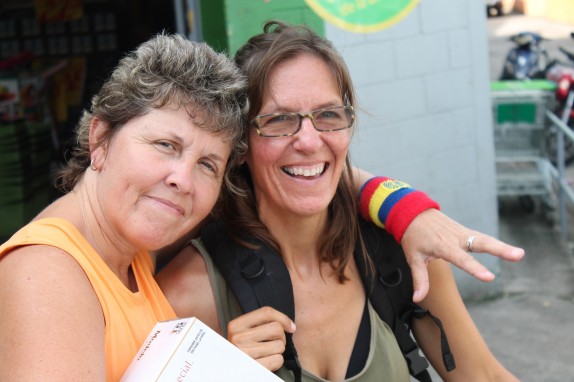 Michelle and I outside the dispencia familia

Oscar is very nice, quite talkative and eager to pass along streetside negotiation tips. You never, ever say “Habla English?” You practice and get down a perfect native language speaker inflection for the opening line “Cuanto cuesta?” Then, once you deliver your inquiry like a longtime resident, you keep your mouth shut if that is the extent of your Espanol. Oscar explained that the taxi driver or other merchant is then thinking, hmmm, gringo or no, I can’t quite tell. In this way, you get the best shot at a fair price.

Also, Lily was trying to get my attention at one point and Oscar explained to her that children use “Con permisso?” to politely get an adult’s attention. Oscar has two children and proudly opened up his wallet to show pictures of his son in a cowboy hat. 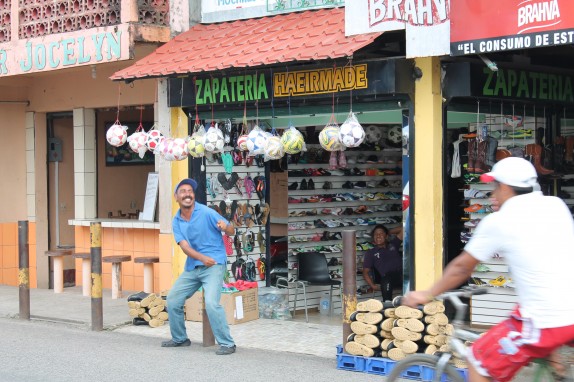 He stayed for a couple of hours laughing and talking with Michelle about some of the mutual people they knew in the Rio. He speaks little English and Michelle speaks excellent Spanish so we got to follow along and ask for occasional translations from Michelle. He emphasized that the ride had gone well because anytime you drive an American around, you usually get waved right through the checkpoints with no problems. Plus, Michelle had insisted they stop at the first convenience store for a couple of beers and then, at each checkpoint, handed out Oscar’s business cards to all the policemen they passed. I don’t think he gets a client like that everyday. She had cards for us too. Lily promptly decorated two with princess drawings. We promised to make good use of these and pass along to boats with little girls.

Oscar was in no hurry to go because Honduras closes the checkpoint every night at 6:00pm and doesn’t open again until 6:00am the following morning. On the way here, they had just made it before closing time. Oscar was stuck in Guatemala overnight. After a couple more beers, though, he caught us yawning and politely called it a night. 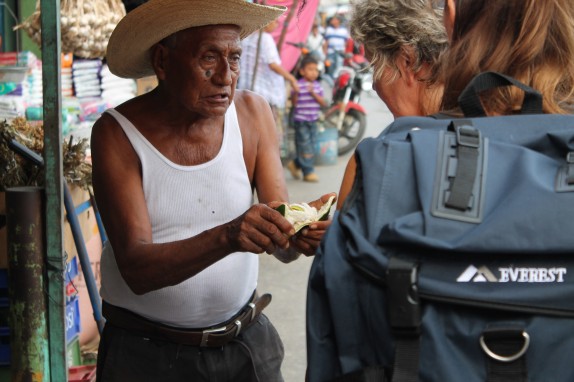 This morning, Michelle took a short walk around the marina and came right back with Alex. She knows Alex very well from time she has spent at his previous employer, Tortugal. He now works in the Mar restaurant. We headed to town to do a little shopping and she introduced us to the very best cobbler in Fronteras. Randall does need a little sandal repair and may visit him. She also ran into Jamie who she knew from Catamaran marina. She had mentioned that she hoped to see Jamie since she has three young girls for Lily to meet. Sure enough, the girls were with her so Lily got to meet Allison, Mallory and Jamie. They are no longer on a boat but live nearby and said they will try to come over and meet us for some playtime at the soccer field by Mar.

As a final test, we stopped by Jocelyns for liquados, a sweet frozen drink made with fresh fruit. We had stopped there several times and felt the waitress was a little annoyed with us for our poor language skills. Sure enough, Michelle got her to stop by and chat wherein she asked Lily’s name, said she was very pretty and asked about her schooling. Evelie said she had a five-year-old daughter. I threw in a few questions about shopping at the fish market which she still found incomprehensible but she smiled indulgently this time. So our social circle grows. As I say, it is one of the many things we love about hanging with Michelle.

Jake, too, has made many friends this past weekend. He has spent every day at Casa Guatemala playing with the kids who live and go to school there. Casa Guatemala is a local orphanage which has a international volunteer staff working with the kids. He has not had time to put a post together but will try to get something written soon. 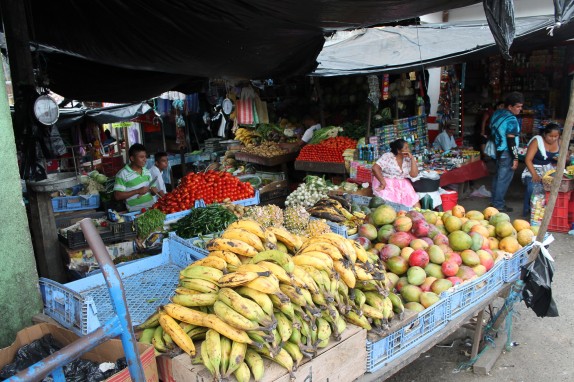