Last night, we went out to eat with Jim and Marley to a really cool restaurant up the river near the Castillo de San Felipe. They led the way in their dinghy and we puttered along slowly behind them. Our outboard has developed a chronic wheeze which starts up anytime the throttle is past the halfway point. Randall is not sure if the carburetor needs cleaned again or if a little of the nightly rainfall is finding its way into the tank. We finally made it to the small creek leading to Hotel Kangaa. It is so pretty to take these tranquil little streams off the river and up into the jungle. We passed some sort of motorboat hotel with what looked like private slips featuring a private cabana behind each one. There were several pretty palapas with nice decks on the water. A couple of places said “Se Vende” and we are always wondering how much a riverfront property would cost. 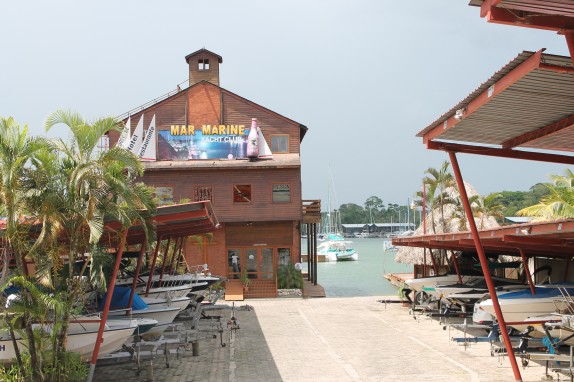 Streetside view of Mar Marina. This three story building is old brick and wood with a watch tower on top. Lily thinks the security guards man the watchtower at night.

Kangaa had a really pretty dock for dinghies with tables on the water. We went into the screened-in eating area which had very pretty gourd lanterns hanging everywhere. The three resident dogs showed up to welcome us. Lily hung around to scratch ears. We all ordered something from the Mexican fare. My enchiladas had a thick, slightly sweet Mole which was so tasty. We talked so long over the meal about things to do in the Rio and future plans that the light started to wane. We purposely came early in order to avoid a dark ride home. None of the wait staff at any local restaurant ever hurries you out like they do in the States. It is one thing I like about eating around here but, very frequently, you do have to ask for the check to be brought. Once we had paid, we headed out to load back in the dinghies. At this point, Randall realizes he forgot to put the gas can back in the dinghy to refill the outboard if needed. “Well do we have enough?” I ask. “I don’t know,” he said. Ok, well that is what the oars are for even though we do so hate to use them. As always, rain clouds filled the horizon and we both agreed that it was really, really nice that it wasn’t raining. As we puttered along, he said probably we would make it since we were going so slow. A little relieved, I sat back to enjoy our first look at the river at night. 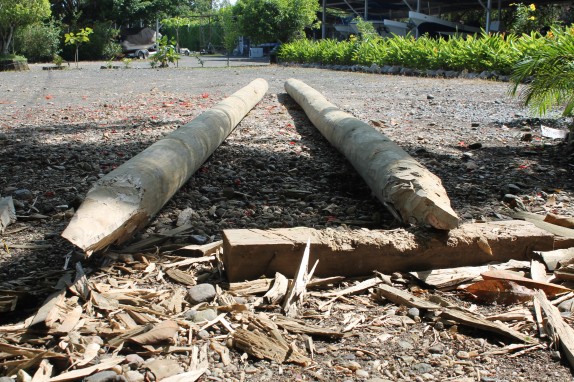 These piling are being sharpened in order to drive them into the water. They will eventually support the pool the marina is putting in.

The stream was even more beautiful with the banks receded into the shadows. Boating in those little rivers has such a quiet, protected feeling to it. We made it into the river and were thankful to see that there was still very little boat traffic. We had the most beautiful, slow ride back downstream. Lights gleamed on the banks and people moved around in the shadows. Reflections quivered on the dark water and the bridge up ahead loomed familiar and solid. A few boats passed us by as we hugged the south bank and Jim and Marley stayed with us since we were having the outboard sputter. Once under the bridge, they took off for the north bank for their marina and we waved into the darkness already unable to see them at all.

We reached the little shortcut into Shell Bay which we usually take that passes between a small island and the shore. As we got closer, a totally unlit lancha came flying through the cut. We motored up slowly, trying to see if there was another boat following. We made it through and motored on into our parking spot just behind Foxtrot. We spent the rest of the evening thumbing through the Lonely Planet Guatemala travel guide. Jake returned from a walk and we described the food in enough detail to make his mouth water. We will miss Jim and Marley! They are leaving for a very exciting trip to see their daughter in Thailand so we are sort of thinking we should tag along with them. But we have so much to do here. Michelle arrives on Monday and Toni the weekend after so we are busy trying to plan the great inland travel excursion. Randall is already worried about keeping track of us all and who to leave behind if there aren’t enough bus seats to accommodate our little tribe.

Here are some pics of the marina I have taken since we got here. I wish I had pics from the restaurant but often leave my camera behind when it looks sorta cloudy (most of the time!) 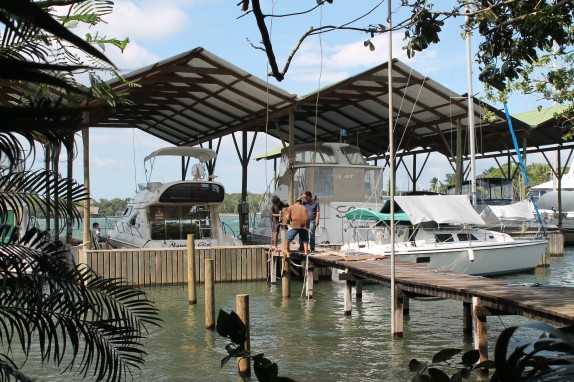 Three men are heaving a heavy metal pile driver to get the piling sunk in the mud. 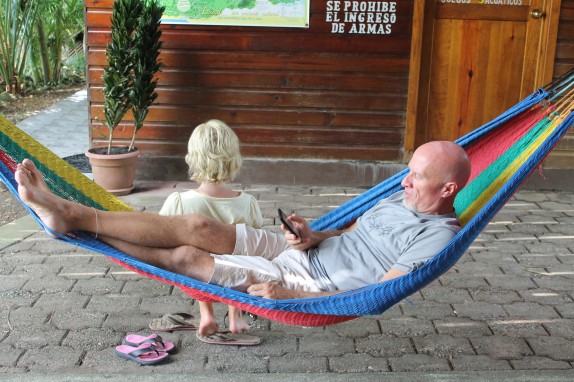 Randall reading to Lily in the hammock. Lily had to sit up so she could draw.

TMS (Too Much Spanish)
Michelle’s Arrival