Key West is the southern-most spot in the United States where you can buy a cheap t-shirt, an overpriced beer and contemplate human absurdity.

We can stand about 5 hours of such contemplation because we will only buy a couple of overpriced beers. Had the beer been cheaper, the contemplation would have ran deeper. They should put that on a t-shirt.

Anyway, this blog is a little late because, after visiting Key West, I had everyone throw out their Key West Street scene impressions to try and weave in some R,J and L observations into the post. It just gave me blogger’s block. They will have to post separately and not muddy my thoughts so much. 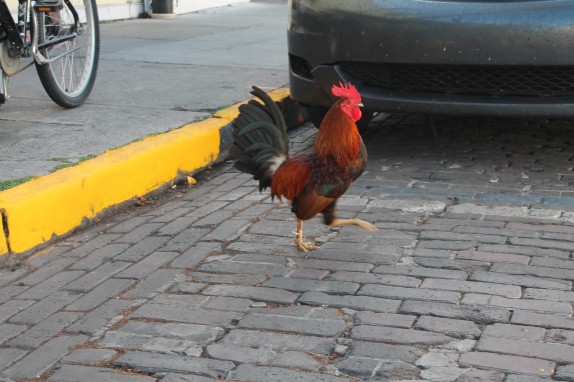 We were anchored a quarter of a mile from the Key West dinghy dock. Since it was a short stay, the long ride to shore wasn’t too bad. The dinghy dock, here, is always crowded and you have to push and shove the boats around to dock. From there, you are just a few blocks from the famous Duvall street and Mallory Square.

We were walking through the marina when we saw the first sign advertising frozen key lime pie dipped in chocolate. This seems to be the most popular key lime-enhanced product but you can get your key lime in a number of ways here – key lime cigars, key lime martinis, key lime mustard for your conch fritters (sooo delicious) and key lime popcorn (Ok I made that up but it has to be out there and sounds good too). 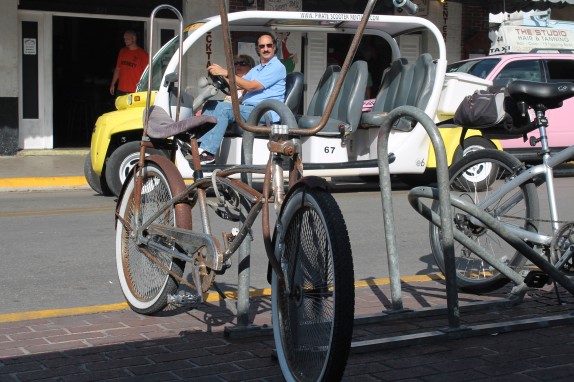 I laugh so much at this. I was trying to get the metalwork on this customized bike but the photobomb in the back is too funny.

We got a few blocks into town and saw our first drunken wreck. It was about 3 p.m. and two guys were leaving a bar on bicycles. The one in back was weaving and, trying ineptly to stay upright, he laid a little more teva rubber on the pedals and ran right into his friend’s back wheel. The friend stayed upright but got drenched with his friend’s one-for-the-road. The beer-drenched biker proceeded out of the middle of the road while the one in back tried to remount and get rolling. He managed to pedal about four yards and hit an SUV stopped in an alley. The female driver got out, clearly pissed, to check out the damage. Not finding anything, she sort of shoved him off her vehicle where he seemed to be trying to orient himself to the horizon. He then made his way up the alley (first sensible decision of the day) and dropped the bike in order to concentrate on puking on someone’s picket fence. This as 3 p.m. Jake will have to post comments on what the midnight drunks are like as we didn’t make it out that late. 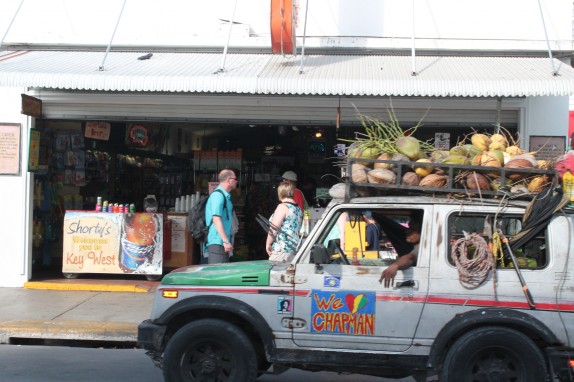 The coconut man did brisk business. Suggested donation was $5. No one seems to have a fixed price at KW.

We walked around a few hours and then headed for Mallory Square. Lily wanted to catch every act – the Houdini, the knife juggler, the fire eater, the unicyclist who said he didn’t have to do hard tricks because he was funny. The guy with the dog trained to collect dollars is still there but he no longer has the dog doing gymnastics. I guess when you are furry and adorable, you don’t have to do hard tricks either. The street performances usually last about 15 minutes and all of them mention that the donation should be appropriate to the performance and that this is their full time job on which they feed their families. The funny guy said something like, “If you only have few dollars, I will appreciate that. If you want to write a note saying “nice performance,” that’s great, too. If you have a ten or a twenty, push your way to the front, please.” 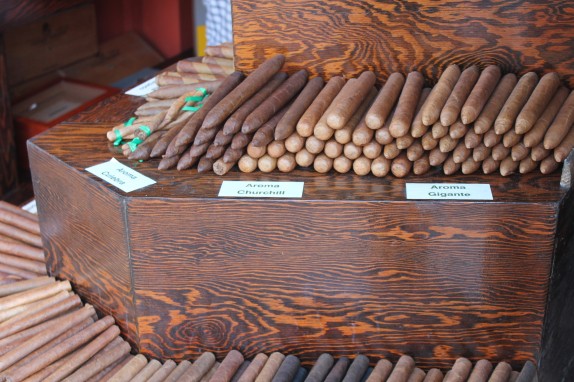 We stayed a couple of days and made it to the sunset celebration both nights. One our second trip to town, a guy posed a parrot on Lily’s shoulder and positioned her for a picture. He then said to go ahead and take a picture which I did. He then said he would allow two for ten dollars or just the one for five. I refused. He said didn’t work for free and that I would have to erase the picture. In the process of me picking the camera back up to erase it for him, another mom and daughter appeared at his side who wanted to engage his parrot in a Key West Kodiak moment. He abruptly dropped this issue with me and turned his attention to a more likely sale so I kept the picture which is blurry because this all went down in the space of 30 seconds. 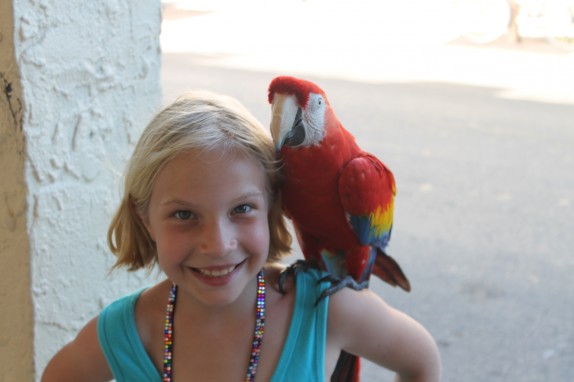 We also did some swimming around our boat but the current it so strong we didn’t stay in long. On Easter Sunday, we headed to Bahia Honda and had better swimming there. Lily was so excited to meet some kids and we spread the beach towels by two lively girls her age. It was quickly apparent they were speaking Italian. Lily initiated contact anyway and they played happily together – the two girls talking away while Lily was silent. I am sure wondering what was being said. They occasionally ran up to Mom and Dad to ask how to say something in English but this was a little more trouble than it was worth. The parents spoke English very well. It was their first trip to the states. They were visiting family in Palm Beach but drove over to spend some family time at the keys.

We made it a Marathon on Monday and we plan to stay a week waiting on our Coast Guard Documentation in the mail. Lily will have lots of kids to play with here. Randall and Jake are sorting out our snorkel gear and fishing tackle to make sure we are set up for some fun in the coming months. 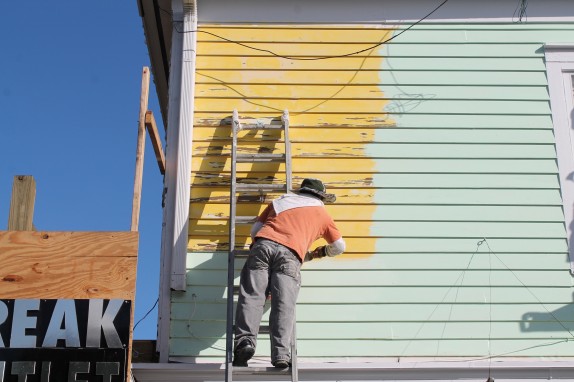 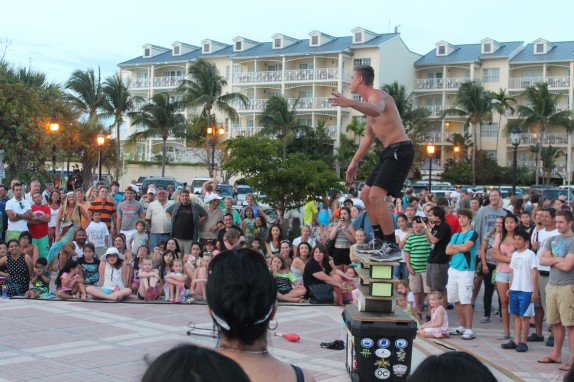 Balancing act. Next he juggles knifes. 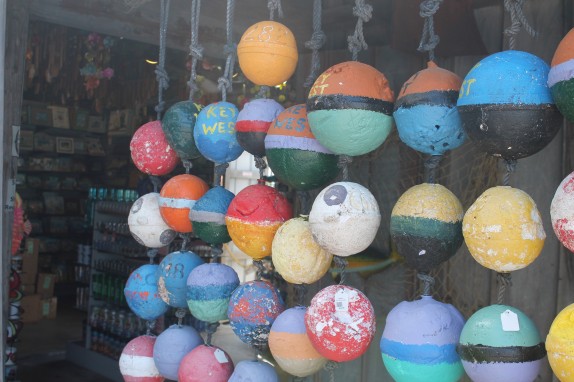 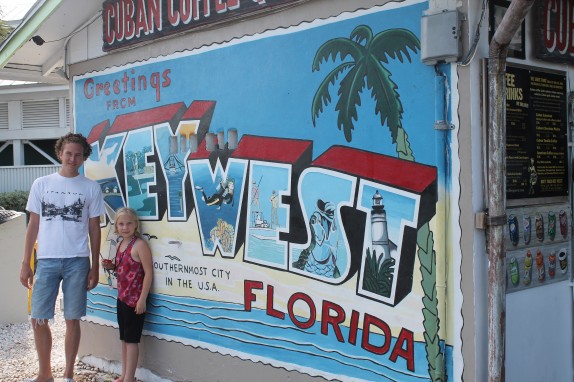 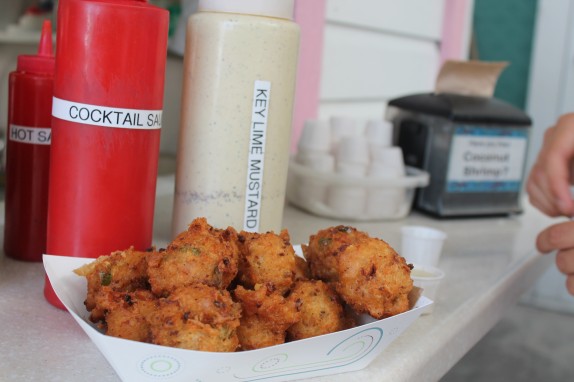 I want more. A lot more. 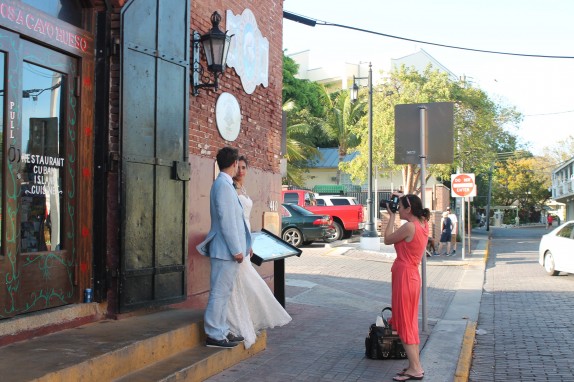