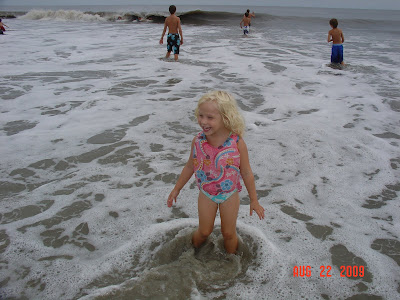 We went to Jekyll Island Saturday with Mack and Shirley of SV Cats Paw. Hurricane Bill was sending a higher-than-normal surf to the area and it happened to coincide with the annual Jekyll Island Beach festival. Live music, barbecue, homemade ice cream and miles and miles of sand. The band covered Van Morrison, ice cream covered Lily and sand covered everything else. We hurried back to the boat as storm clouds approached. Four boats were hit by lightening in our marina during a Friday night light show. Not sure that our presence aboard matters much to lightening but Chewy finds it comforting to have someone to ride it out with.