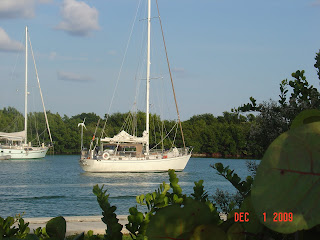 We’re back, sitting on a mooring in Boot Key Harbor, Florida. The picture above is actually from No Name Harbor in Biscayne Bay when we first arrived back. Since then, we’ve made our way halfway down the Keys and plan to stay here for at least a month working on the boat and driving home for Christmas.
Thanksgiving week was the decision-maker. Jacob was finishing up his persuasive essay, “Why teens shouldn’t be homeschooled.” There was no pumpkin pie or large, loud family gatherings. There was a trip to the beach that ended in Jacob’s second injury of the trip, a broken finger. The run-the-business-from-the-boat plan had a few clitches. It was decided, on the Friday after Thanksgiving, to point Capricious’ bow in the general direction of Texas.
We made the three day passage back through Bahama blue water almost glassy this time. The easy sail gave us lots of talking time. We talked about how, a month from now, we’ll only remember all the fun and beauty and excitement. We wished we’d taken more pictures. We talked about chips and salsa and favorite League City restaurants. We discussed the pros and cons of the various Clear Lake marinas. We occasionally thought we were doing the wrong thing and we told ourselves it was definitely the right thing. We called the grandparents upon arrival. They lauded Jacob’s views on public schooling. They hoped we’d be home by Christmas.
We meant to stay out a year but six months of adventure will last us quite a while. Will we itch for a distant shore sooner than we expected? Will the convenience of daily showers, well stocked grocery stores and floors that don’t move lull us into tightly tied docklines?
Now it is Dec 15. We’ve had two weeks back in the United States and are still tossing around questions. Live on the boat until Jacob graduates and then set sail again? Move back to 200 Pecan Drive?
You can only see as far as the horizon, no matter where you are.