We staggered back to the boat last night lugging backpacks crammed with dirty clothes and cameras full of Guatemalan scenery. We had a fast-paced, wide ranging trip and, despite being “bus hostages” for hours at a time, we didn’t miss a meal and only suffered through one bus breakdown (mom and dad – bus hostages just means we willing boarded buses notorious for poor maintenance, overly optimistic timetables and no respect for kidney health). It was just as hot on the Rio as we’d left it but we were so glad to see Foxtrot, our dingy-but-familiar bedding and everything, dirty dishes included, just as we left it. 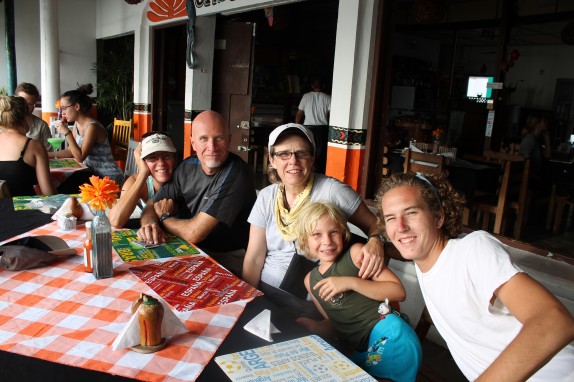 Awaiting our Cuba Libres in Flores.

I wish I could have posted a daily Great Inland Travel report as I’m sure that would have made for more keen insight. Toni, please comment all your added observations to help me out! I am going to just post about Tikal today and post about Antiqua and Lake Atitlan later in the week.

We took the Fuente Del Norte bus to Flores, our jumping off point for the Tikal tour. Flores is a very small village sitting on a small island in the center of Lago de Peten Itza. We got settled in a hotel and then met our friends Scott, Tracey, Will and Molly of SV Yollata at a little waterfront restaurant to watch the sun go down. We ordered a round of Cuba Libres to celebrate our liberation from the five-hour bus ride up into the Peten mountains with only one bathroom break. Since food service in Guatemala tends to be relaxed (as in, eat a snack before you go or take one with you if you are urgently hungry), we had time for a couple of rounds. Unfortunately, the drinks got progressively weaker until the waiter finally admitted that he was out of rum. Thinking that no bar runs out of rum, we encouraged him to hunt around for some but he informed us he was unquestionably, all-the-way-out of rum. So, we actually managed to turn in pretty early for the next day’s early start for Tikal. 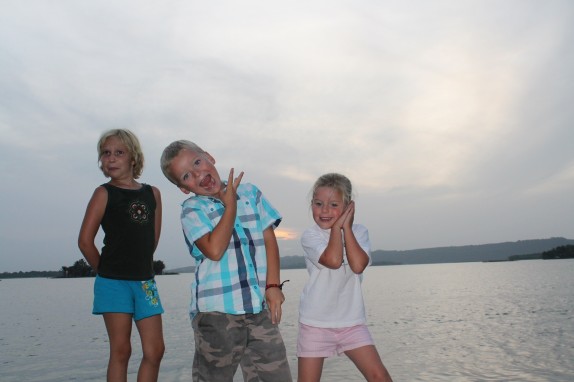 Lily, Will and Molly practicing their Mayan dance moves.

We packed in with several other travelers for the hour shuttle ride to Tikal the next morning. We got there at opening time as an early start is recommend if you hope to see and/or hear some of the jungle wildlife. Our guide stayed with us all morning and then left us to tour the more outlying temples on our own. He mentioned that his own family was displaced when the national park was established so it seems he has a deep connection to the area. He pointed out some of the indigenous plants including wild coriander and delicate touch-me-nots which close-up with a finger stroke. We also got to see a furry black and white anteater which he said was a rare visitor to the park. The guide called up the Howler monkeys with a throaty Howler call which both Scott and Will could also mimic well enough for some monkey conversation. 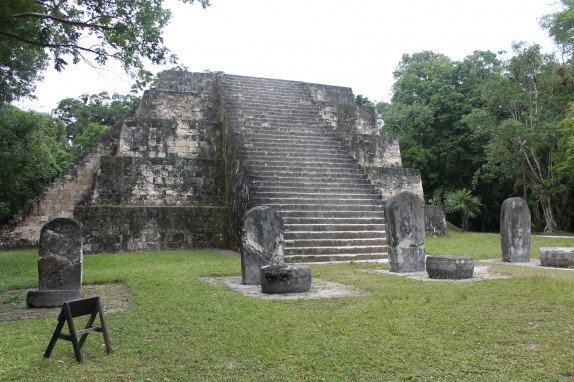 This is one of the smaller temples. The stones in front are called “stela” and were used for sacrificial ceremonies.

Our guide also pointed out how many of the temples were built to align with the solar/lunar seasonal equinoxes. It is believed that the Mayans held ceremonies to celebrate these astrological events. He described how the Mayans are believed to have held nighttime ceremonies which involved lightening large fires and funneling the smoke through the eye/mouth sockets of certain ceremonial masks. Jake and I are both curious to return to Tikal to witness the seasonal reenactments of this eerie sight although I may chicken out of this out of suspicion that Mayan equinox parties get out of hand quickly. 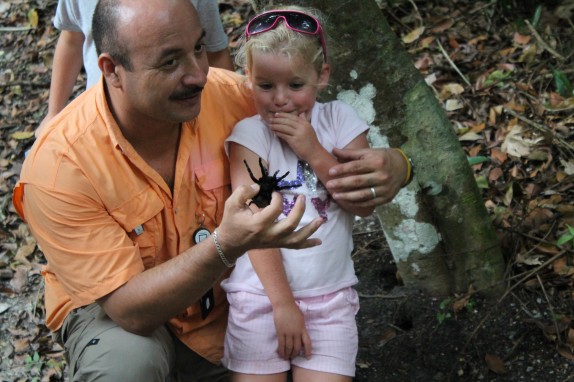 Our Tikal guide giving Molly up close view of a Tarantula. Michelle said that on her Tikal visit several years ago, the tarantula was passed around to everybody in the group. Our guide must not condone this form of tarantula abuse.

One of the aspects of Tikal that is sort of exciting and perhaps questionable from a preservation standpoint is how much of the structures are accessible for exploring. You can climb to the top/upper levels of several of the temples. A few areas have been closed to climbing due to the dangerous incline and/or to protect fragile carvings. However, you are able to poke your way through the maze of stone walls, run your hand along the ancient steps and nooks and climb many areas for the breathtaking view above the forest canopy. The guides point out some of the park rules regarding what you can and can’t do/touch/climb. However, the park had very few personnel on the grounds to protect the site and educate visitors. Many structures are still being excavated and sit, partially exposed, beneath the thick jungle vegetation. The guide stated that about 80 percent of the recovered Mayan relics are now preserved in foreign museums across the world. While this is an unfortunate loss to the local culture, it has resulted in the professional preservation of thousands of Mayan artifacts during the decades of Guatemalan civil war and subsequent national fiscal crises. With this in mind plus the sight of so many sights surrounded by scaffolding made us wonder what Tikal would look like in the years to come and what lay still waiting underneath the tree roots, decaying leaves and monkey dung. Also, I had to mention monkey dung so I can tell you that Jake stepped in a big pile of it. The guide pointed it out to those of us within earshot but Jake was loitering at the back of the line and didn’t see us stepping carefully around it. It sounds like I am unsympathetic when, in fact, I am the last to be unsympathetic since I had my own such difficulties in the stray-dog streets of Antigua. 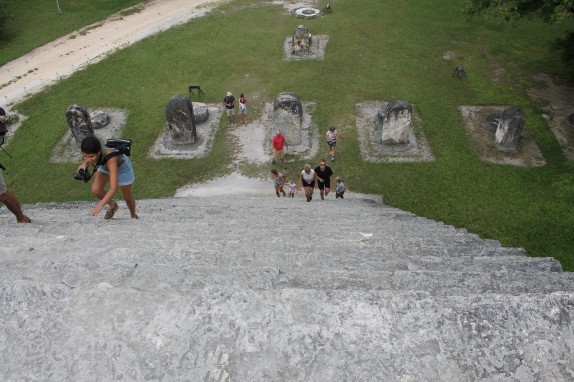 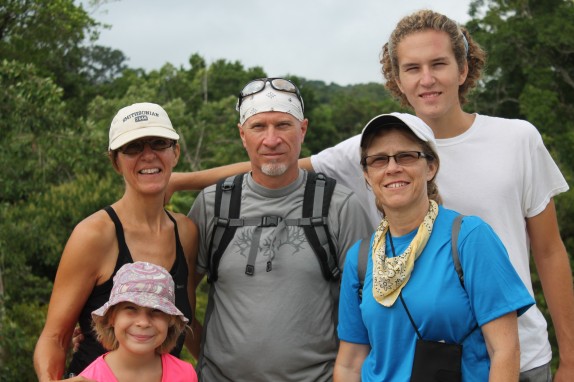 Here we are at the top of the first and perhaps shortest climb of the day. Several more climbs were to follow so that we could take in the view from the various temple heights.

Gran Plaza is the heart of Tikal with a number of structures sitting very close together. The guide gave us a brief orientation to this area and then left us to explore on our own. In most of Tikal, you sort of contemplate the more mystical aspects of the place. However, one area featured what appeared to be sports field of some kind so it was sort of interesting to see a more normal aspect of Mayan life. 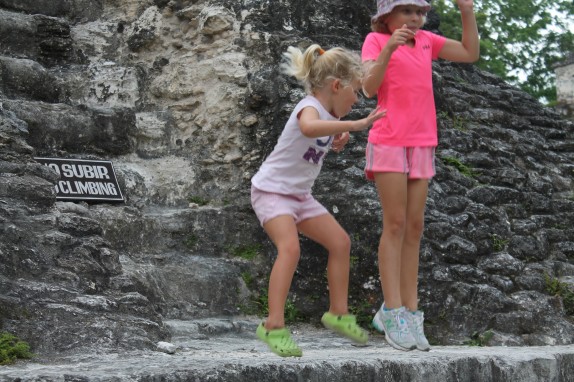 Lily and Molly jumping at the base of a tall temple. The guide was below them trying to frame the picture so it looked like they jumped from the top. 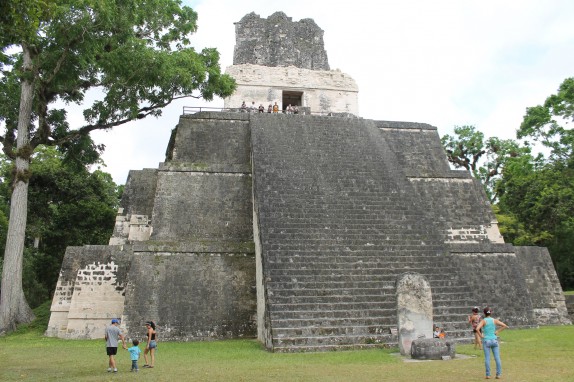 Here you can see how high up the climb is to reach the observation level at the top. 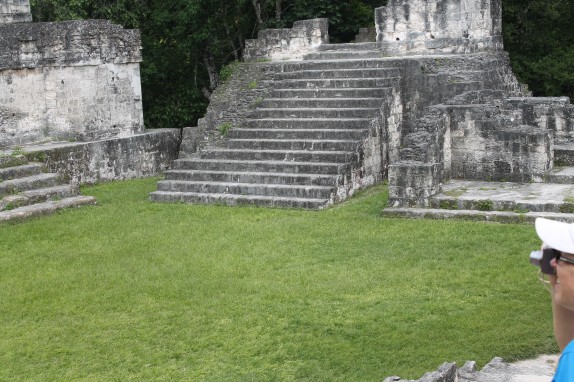 We were not told what type of games were played here but it appears to be a sports venue.

The 64-meter-tall Templo IV is the highest building at Tikal and the second highest pre-Columbian building known in the Western Hemisphere (guidebook plagiarism). It was completed in 741. We spent 15-20 minutes sitting at the top, looking out over the other temples whose roof combs perched above the treetops while the bases lay obscured in the jungle. A rainstorm was approaching from a distance and some birds circled. We headed back down and most of the group headed back to the park entrance at this point. We trekked on alone to the Temple of the Inscriptions to add one more Mayan site to our tour. We were excited to see inscriptions but were disappointed to find this Temple heavily surrounded by scaffolding. No inscriptions are visible from the bottom and there is no way to get to the top so the inscriptions are still pretty much a mystery to us. 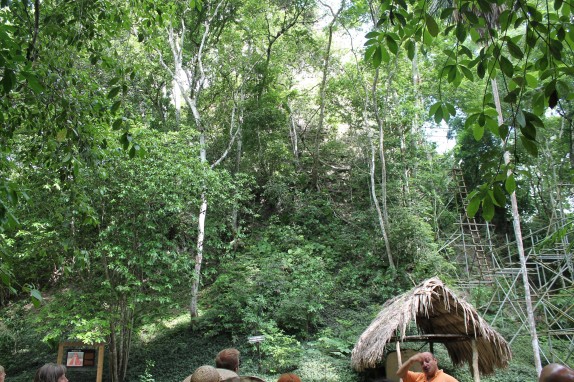 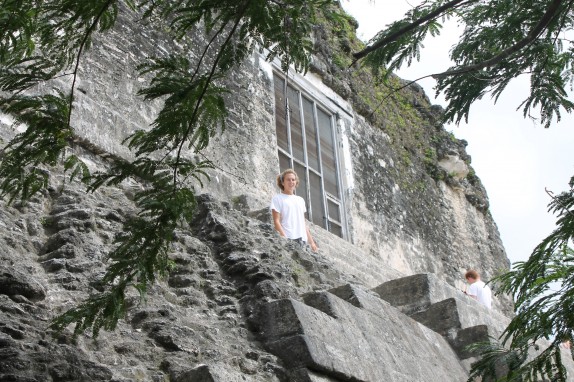 Jake looking down from Temple IV. 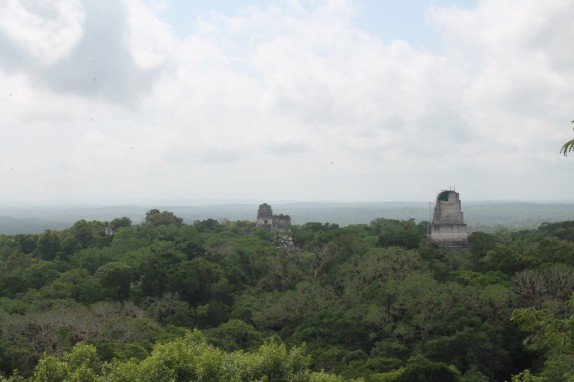 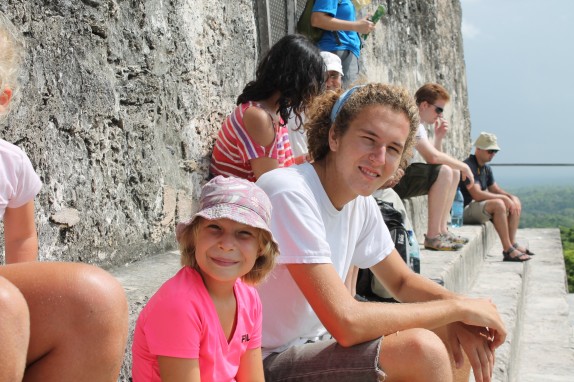 Jake and Lily sitting at the Temple IV overlook. 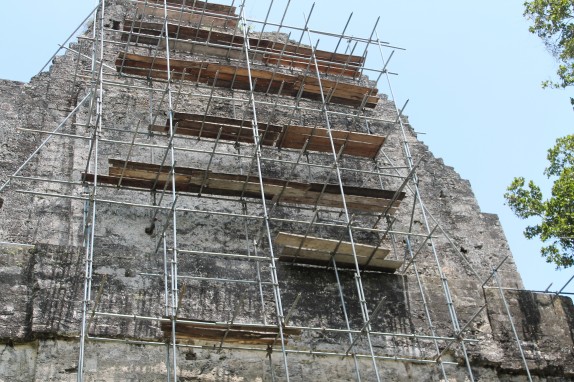 Temple of the Inscriptions covered with scaffolding.

Our last stop of the day was at the small market near the park entrance where we made a few small purchases. We spent the evening eating some delicious food from some Flores street vendors and then topped off the meal with two pitchers of Mojitos and lots of fun storytelling with Scott and Tracy. Scott and Tracy have done so much traveling and tell their great stories in a captivating Aussie accent. We could have plowed through another pitcher of Mojitos had we not had tired kids and another early start the next day. We took an even less expensive bus back to the Rio and this time was not even granted a single bathroom break on the five-hour trip back. There are so many buses going back and forth that I guess the secret to Guatemalan bus trips is to just get off when you need to and try to catch another bus headed to your destination. However, we are a little hesitant about getting stuck in some rural Guatemalan outpost so we have been practicing intentional dehydration. 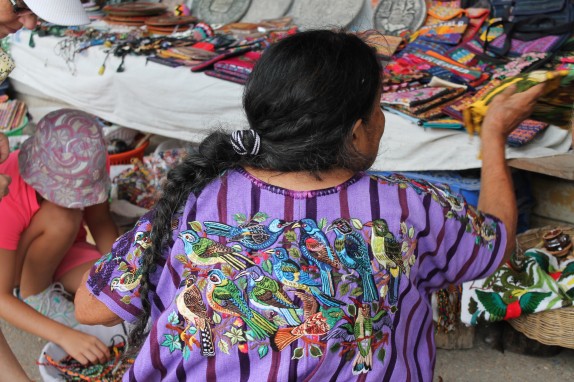 We bought a few items from this senora and admired her pretty embroidered blouse. 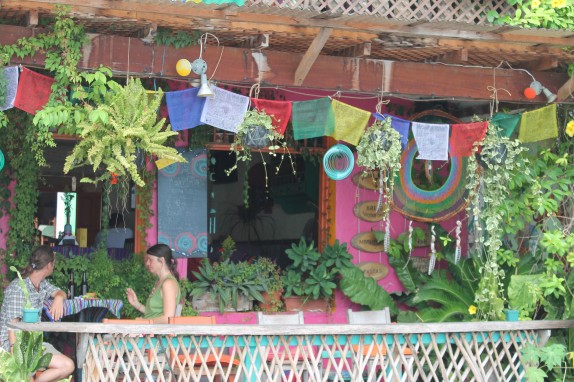 A colorful Flores restaurant tempting us. 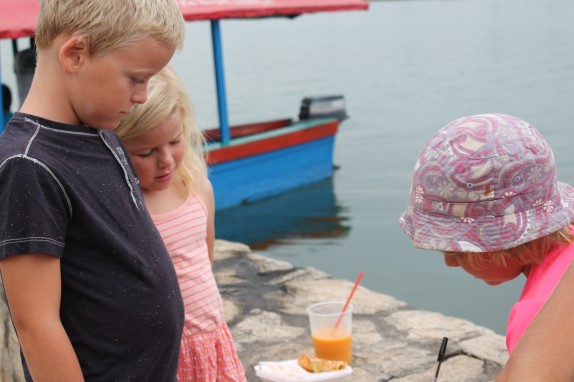 Lily signing Will’s notebook. Will and Molly are the sweetest and Lily is loving their company. 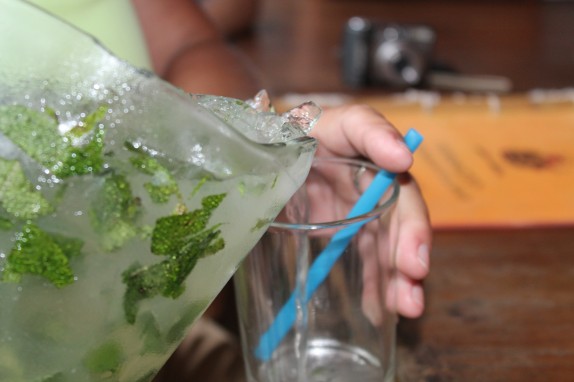 Wild Day With Pam and Al AND Toni’s Arrival!
Antigua

2 Responses to Flores and Tikal