“Can I go fishing?” We hear this request daily. Lily would like to catch something, sure, but a fish-less stretch is not an entire loss. She likes casting and casting for 30 minutes is, by itself, sport enough. Occasionally she gets the plastic worm to sail where she wants it and a minute of success is enjoyed. More often, she gets it right next to the neighbor’s rubber dinghy that I have told her to carefully avoid. Once the hook is in the water, she starts the jerking process which, as explained to her by Uncle Joe, is a way to attract a little attention to your bait. Uncle Joe is a liveaboard on our dock well known among the kids for burning movies for any kid who will address him as “Uncle Joe.” Lily is often the first to spot him, shouting out a hearty “Uncle Joe” 50 yards away. She has earned three movies and has been instructed to bring a smart drive for her next round. Joe provides occasional bird watching and fishing instructions to dock children as well. I’m sure he’s noticed that Lily’s line jerking tends to rock nearby vessels. The fish down under no doubt brace themselves when her worm drops in on them. ZIP! ZIP! ZIP! A possessed worm never sits well on the stomach and they watch their fellow fish to see if anyone is game enough for this worm. The worm disappears after a few violent Zips as, above water, the fisherman has spotted approaching figures. This is the best part. No one passes a little kid fishing without polite inquiries. “Any luck yet?” “No, not yet,” she says with a sigh. “Uncle Joe can catch fish with just a piece of hot dog!” she proclaims with fresh amazement.” “Well, good luck.” At dinner time, we put chicken on the grill and call off the evening fun. Someday, it will be a big fat fish on the grill but not today. 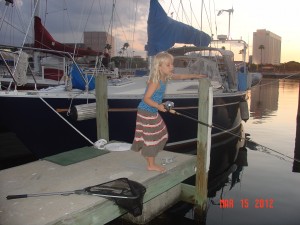 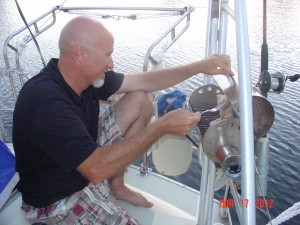 Bowls of Boatmeal
A Madden on the Indy Racetrack. Beware!

2 Responses to Fishin’ From The Dock