Did you know you can’t tie a boat to a dock? I don’t mean that it can be challenging in high winds or that the current always seems against the idea. I mean that it can’t be done, according to my March, 2012 edition of Cruising World. Cruising World’s Mailbag section features a letter to the editor from C. Henry Depew of Tallahassee stating this: “My favorite misuse of nautical terms is ‘boater’ and ‘dock’. A ‘boater’ is a straw hat worn by one who’s boating. A ‘dock’ is the area taken up by a boat therein floating (or not floating, as in a dry dock from which the water has been drained). The boat is secured to a pier, wharf, or quay. It can’t be secured to a ‘dock’.”

I could stomp my new, oversized, black boater (picture to come!). I’m going to have to go through all previous posts looking for these two words. Then I realized, Otis Redding, if he were still with us, would certainly not rewrite, “Sitting on the dock of the bay.” Nobody wants to warble “Sitting on the pier of the bay” while dangling his legs from a quay. No, we like resting our bones from the dock which brings to mind old wooden pilings, splintery planks and sunsets over the marsh. However, henceforth, I will carefully use ‘boater’ and ‘dock’ in an effort to impress astute readers such as fellow educator, C Henry Depew.

If you’re wondering what gives with the English lesson, remember, I’m a teacher now and Foxtrot is a school!  Teaching is a job you don’t set aside at 3:30! Actually, you set it aside at straight up noon when you’re a homeschool teacher. Homeschool teachers are famous for saying, “Children are learning all day.” Yes, they are learning, plotting and scheming ways to thwart your every educational effort.

Randall and I have been taking turns teaching Lily.  I know you are all wondering how it is going. I can tell you, those poor teachers have a lot to deal with. Has Lily always thrown her body backwards during math as if overacting a death scene in a play? I can’t do it, she cries, and crashes backwards, laying still in hopes that math disappears after doing such harm to a poor little girl.  I tend to stare at her, hoping she will miraculously recover.  Randall, of course, orders her up with a stern warning that no more dying at the table will be allowed.  Between the two us of, we are keeping somewhat on track.  We’ve probably read more complex books than she might have heard at school.  However, I’m not sure she’s getting any ahead in reading or math.  Giving a little writing assignment to her is like delivering apocalyptic, happiness-shattering news.  I’m reminded of Tom Sawyer telling Aunt Polly he was too sick for school.  Aunt Polly decided he must need a dose of PAINKILLER, her homemade tonic which Twain used all-caps to spell.  Tom, a little scared of PAINKILLER, decided to perform clinical trials with his cat and gives the cat the dose when Aunt Polly’s back is turned.  The cat immediately went into a spasmodic fit overturning furniture and running into walls.  Mark Twain nailed the scene so well that Lily had her own fit while I read, rolling back and forth on the bed laughing hysterically each time the cat hit another piece of furniture.

If only Mark Twain had written a how-to-homeschool manual. If only we had Aunt Polly’s recipe for PAINKILLER.  If only summer would get here . . . 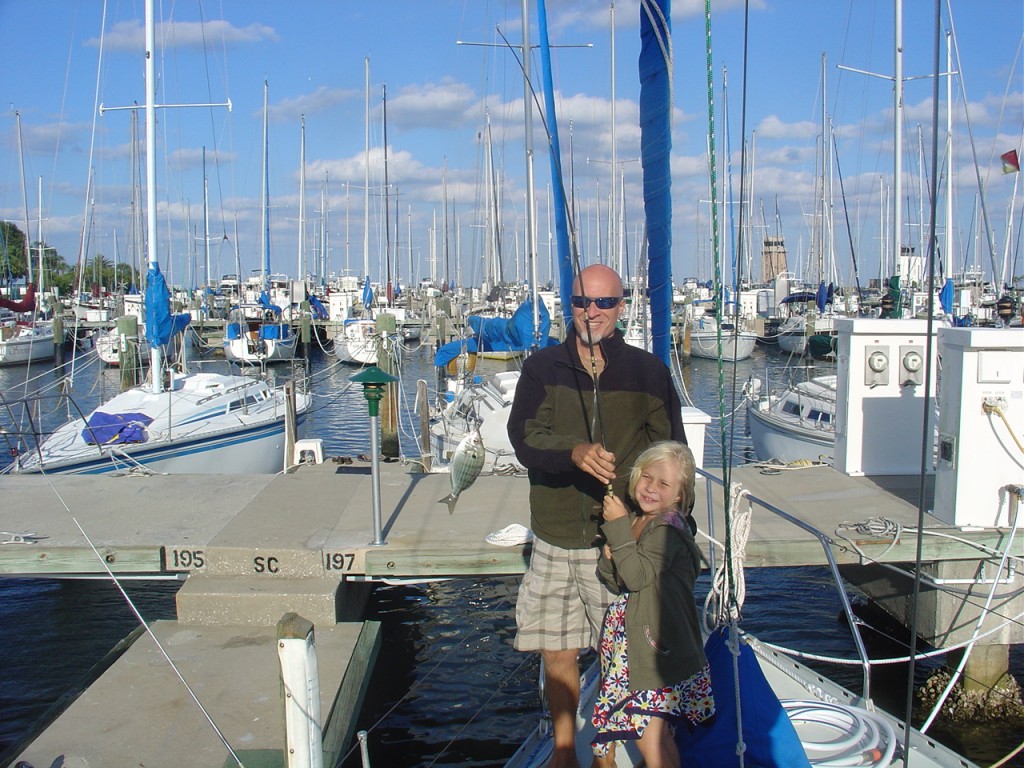 Lily showing off her catch