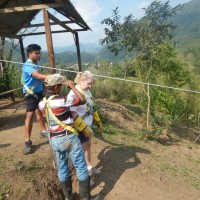 We had two remaining activities for our last day at Semuc Champey: the zip line and a hour-long float trip down the Rio Cahabon.

El Retiro’s zip line has only been up for a week. It is a three cable zip line so you sort of zig zag across a small valley near El Retiro. Jerry and Debbie had become acquainted with three American nurses who were staying in the room next door. Over the weekend, the nurses came staggering back from the newly installed zip line. While two of the ladies rode without incident, one of the ladies started rotating in the harness on the way down. On a zip line, you slow your pace, if necessary, by lightly closing a gloved hand over the cable above your head. Because the lady started rotating, she lost her grip on the cable and couldn’t brake. She hit the cushioned pole at the end of the cable pretty hard, according to their recount. Jerry and Debbie said she seemed in a good bit of pain. Jerry and Debbie have ridden a number of zip lines so they are zip line semi-professionals. Randall and I have only zipped down a cable at Buffalo Creek Lodge which is a short, harness free ride ending in an intentional fall into the pond. However, we called that enough experience to tackle this one. The only remaining question was if Lily would ride. She had impressed us so much with her daring cave exploration, we thought she should give it a try. She was hesitant. When we went to sign up, they said they didn’t have any child harnesses so the decision got made there and she came along as an observer/water and sunglasses holder. 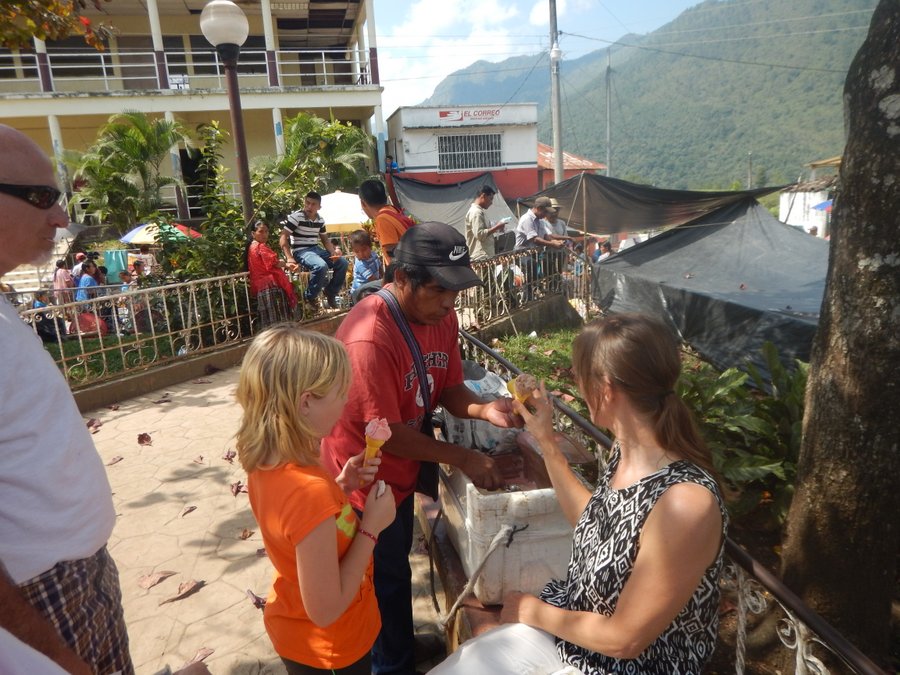 We were zip lining with two others – a bartender/river guide from Guatemala who works full time at El Retiro and a volunteer from London working at El Retiro to extend his Guatemalan trip another month. He and his girlfriend said it was too cold in London to return just yet. Anyway, these two were also set to do the float trip with us in the afternoon so it was fun to share the zip line with them too. I feel really bad I did not get their names. To avoid confusion, I am going to nickname them for the rest of the post and refer to them as Funny River Guide Dude and Clumsy But Chipper London Bloke (Clumsy but Chipper for short). 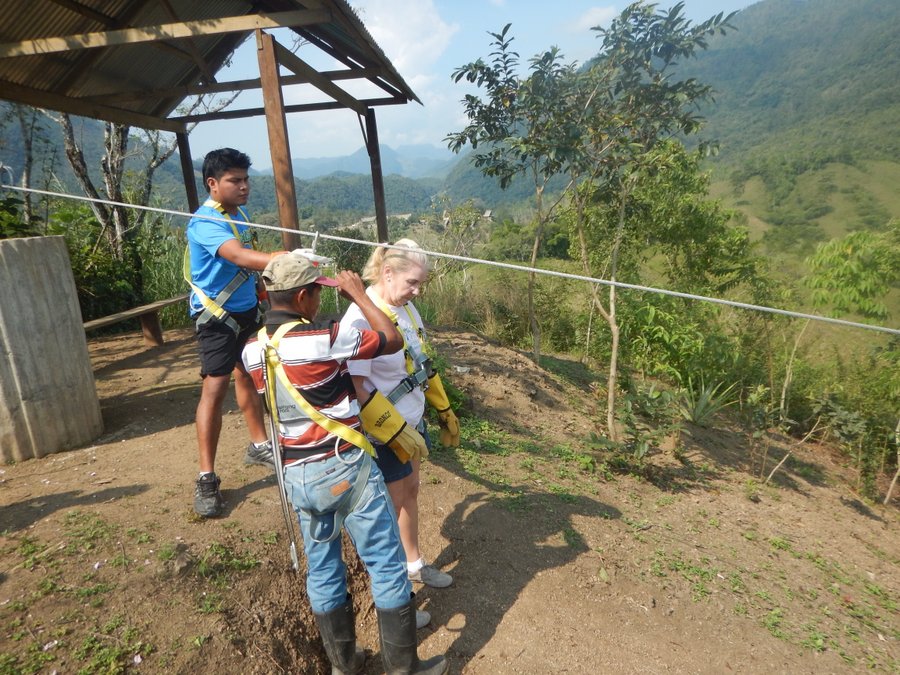 Debbie getting ready to zip. Funny River Guide Dude is behind her.

Ok so we all had this story about the recent injury on our minds as we got set up at the zip line. However, one of the managers at El Retiro, Jill, went along to translate the instructions into English. She was pretty reassuring about this braking business. She explained how you could use your left hand to steady yourself and keep from spinning. Both she and the zip line operator who harnessed us up repeated several times to just not take your braking hand down from its position above your head. Also, they emphasized, don’t put your braking hand in front of the cable car that is carrying your weight because you could lose a finger that way. 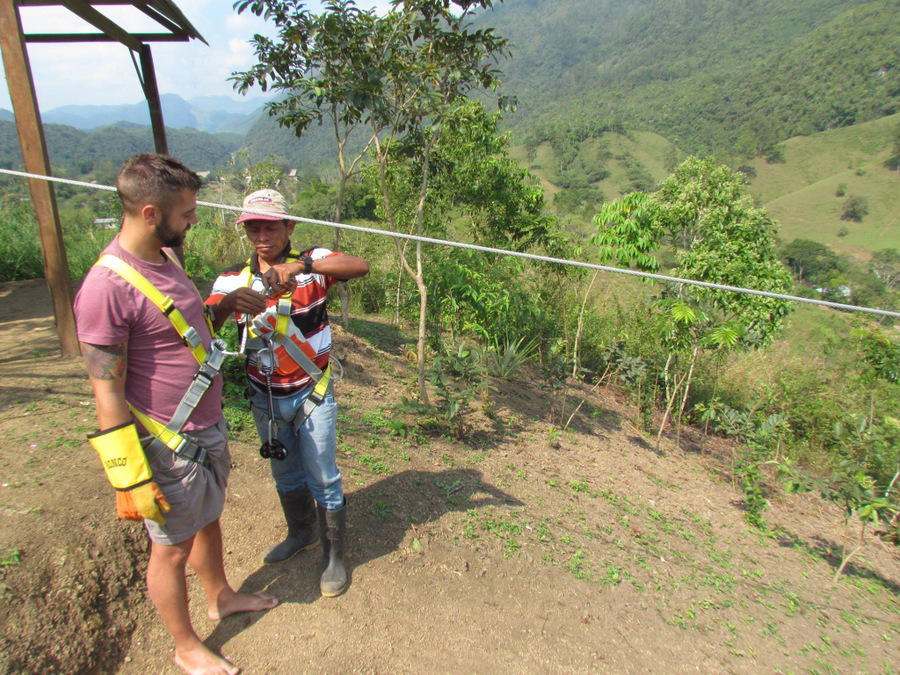 Jerry went first. It was a perfect descent. Clumsy But Chipper London Bloke said, “Wow, a professional.” Debbie went next. Another perfect descent. Clumsy But Chipper said, “They must have done this before.” I went next. I did turn a little on the way down but easily corrected. It was great fun. Randall and Funny River Guide Dude also zipped down smoothly. We all joked about whether Clumsy But Chipper was going to keep his flip flops on or carry them. He came down barefoot and was turning a little. He managed to get back on track but ended up with his hand right in front of the cable car in the “you-might-loose-a-finger” zone. “Wow, my hand got pinched and is a little hot!” he said as he was getting unclipped. Debbie reminded him where the braking hand was supposed to go and he hadn’t realized he had repositioned his hand. We still have two more cables to ride and, both times, Clumsy But Chippy got to the end of the line with his braking hand in the wrong spot. “Crazy!” he would exclaim. “How does that happen?” 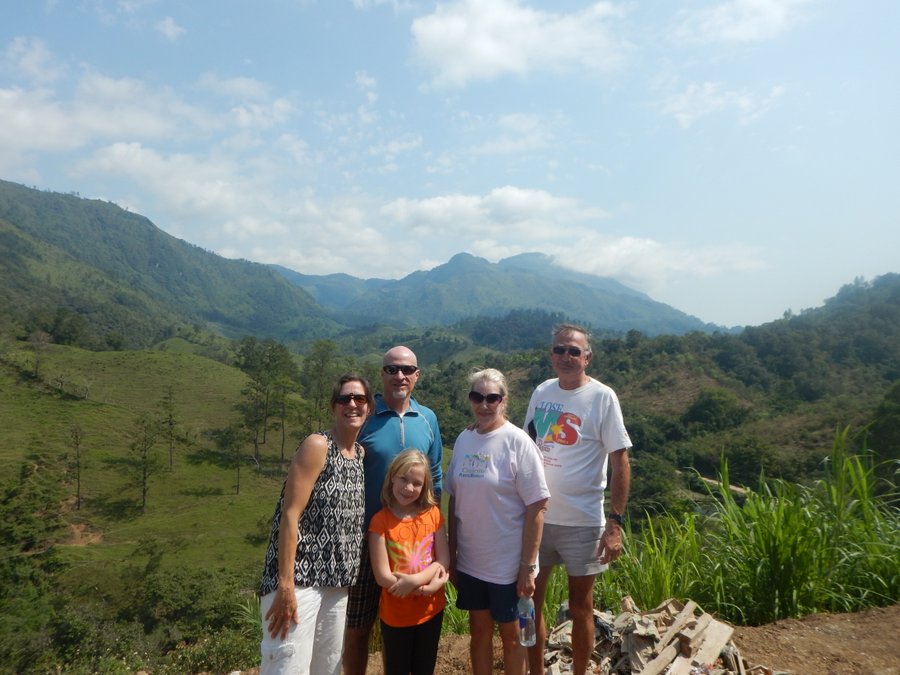 The five of us after ziplining.

That afternoon, we regrouped for the float trip. Our Yolatta friends had mentioned how much Will and Molly enjoyed the float trip so we assumed Lily floating wouldn’t be a problem. However, Jerry went down to secure our spots and they told him “no kids.” We went down to figure things out and Funny River Guide Dude said “Nina. Yes. Is ok. She can go.” I tried to pin down why it was not ok earlier but ok now. There was a few lines of Spanish that did not clear anything up. I said “Is it peligroso (dangerous)?” He said “No peligroso. Mucho lluvia (rain) …” and then a lot more Spanish that seemed to indicate that it was nothing they couldn’t handle. We went over some float trip safety with Lily and decided it looked safe to us. 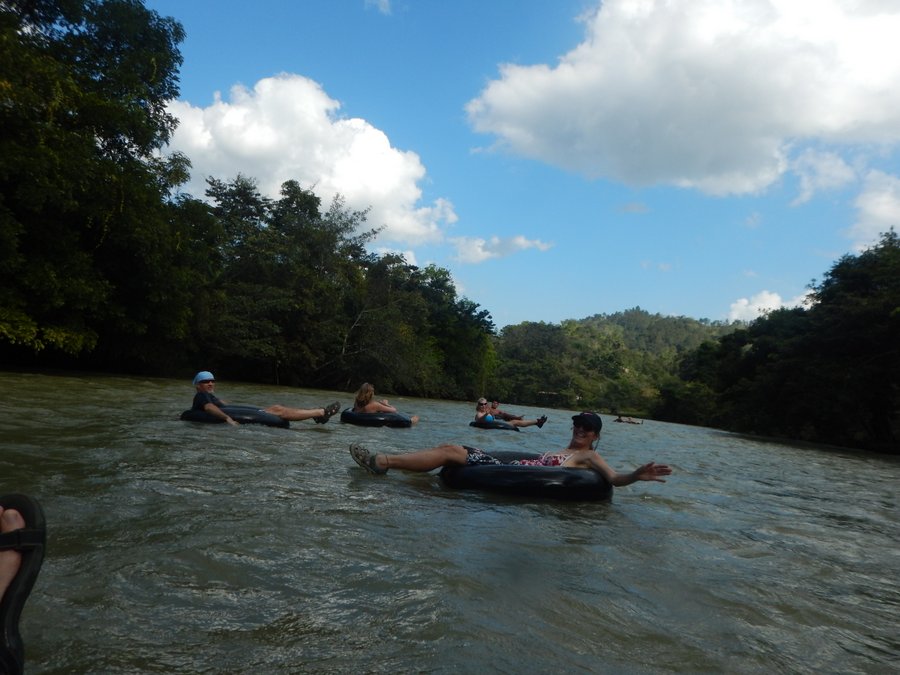 I seem to be doing OK holding the beer.

They loaded us up for a short trip up the river. We put in a few miles upriver from El Retiro. About 15 were in this group and we scrambled down to the river’s edge to test the water. It was cold. It was a beautiful sunny day, though. While the river cut through lots of jungle, we could see patches of sun brightening the surface along the way. Funny River Guide Dude whooped a few times to get our attention and demonstrated how to jump in butt-first while sitting in your tube. Debbie went in and immediately lost her sunglasses in the water. We all got in. Lily was going to sort of float between us but Funny River Guide Dude floated over to us with his fellow guide, Arnauldo. Arnauldo was to be Lily’s personal guide. He roped Lily’s tube to his and they took off in the lead. We floated right behind them and the rest of the group spread out behind us. 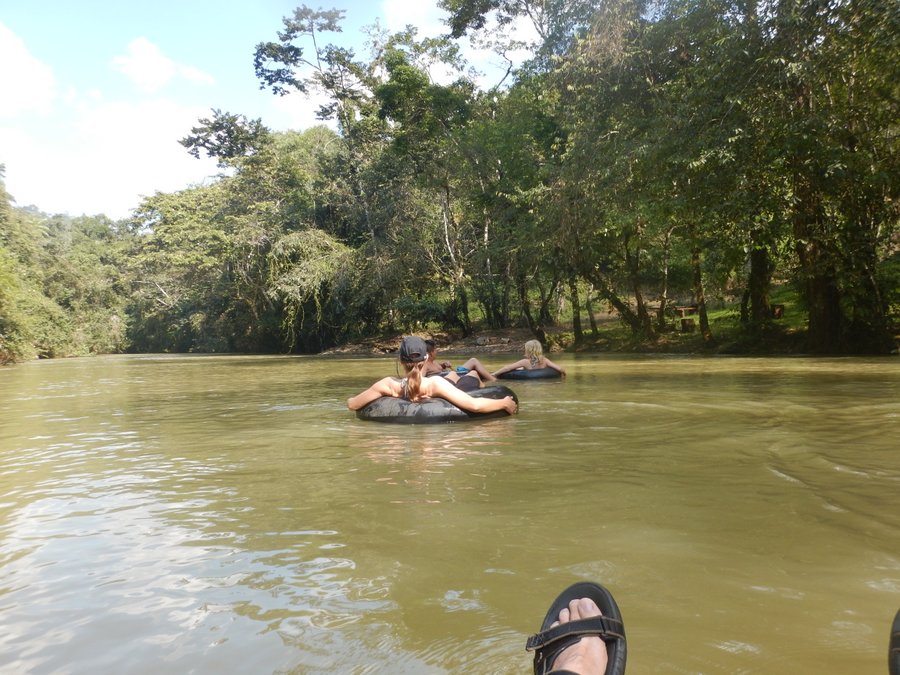 A sunny stretch of the Rio.

We had lost sight of Funny River Guide but he reappeared after making sure everyone got in the water. He was wearing Debbie’s sunglasses which gave him a rather comical look. He passed out beer as he floated past each of us. He gave me a few instructions about holding the beer can between my legs. I suppose he has a nickname for me. Perhaps, Can’t Hold Her Beer Gringa. We had a lovely calm float. Occasionally, Funny River Guide would call out “El Centro. El Centro” and we would look up to see some downriver obstacle such as overhanging branches or protruding rocks. Every time this happened, Clumsy but Chipper would start paddling away. However, he never got the hang of paddling backwards and always tried to steer with a forward-paddling motion. Basically, he hit most of the overhanging branches and several rocks.

“How is it you avoid all those rocks?” he would call from the back of the group. “Oh my, more branches!”

We floated over a few shallow areas and a few light rapids, in and out of the dabbled sunlight. There were a few Guatemalans along the banks. We floated past El Retiro and waved to some of the other visitors. A little past the hostel, Funny River Guide Dude paddled over to the side to motion us out of the water. The water was somewhat swift at this point so we had to paddle hard to reach the side. However, everyone made it to shore in time to watch Clumsy But Chipper on the far shore paddling away and saying, “How do I? I don’t think. Ouch. Rock there!” Funny River Guide Dude turned his back and gave a “good riddance” shrug. Arnauldo, however, waded out as deep as he could in the current and grabbed Clumsy. Clumsy stumbled out of his tube and up the hill. At the top, he exclaimed, “Oh my, I seem to be bleeding!” as he examined a bloody big toe. I am not sure if he will go again during his stay. He might find himself being tied to Arnauldo next time. 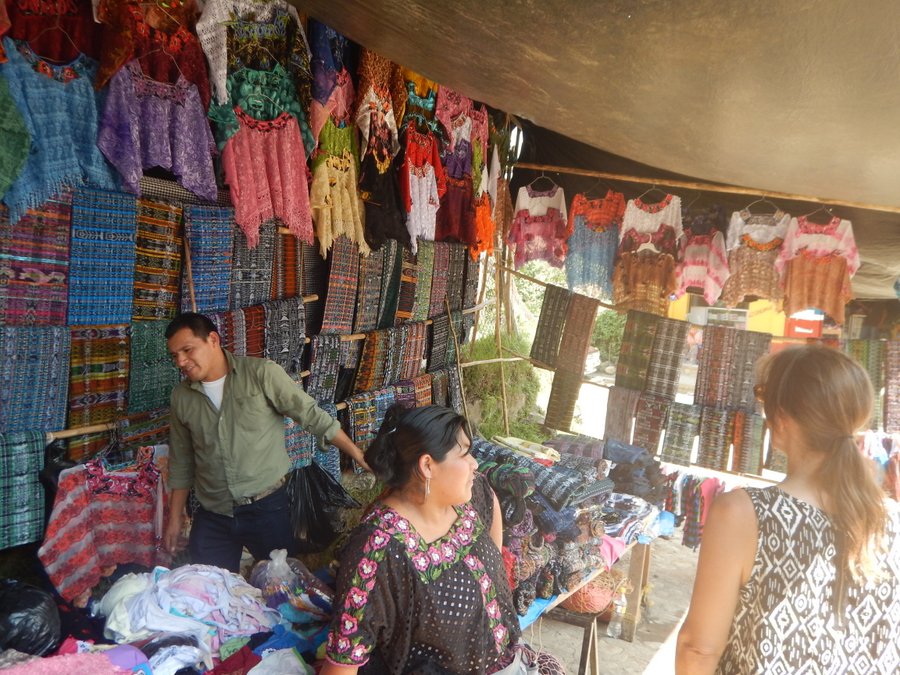