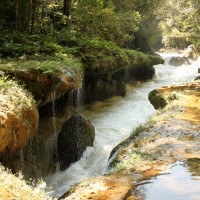 Sunday we got up early to catch a ride to Semuc Champey Parque. We packed our peanut butter and jelly and stopped for some sweet rolls on the short walk through town since we weren’t sure if food would be available at the park. We arrived at the little crossroad where rides up to the park are negotiated. Carlos Santana stepped up to assist us and thought he could get us a one-way ride for 20Q/person. A lot of times an English-speaking local will be waiting around at these locations to do the bargaining between the gringo and the driver. Our driver was a little testy about the price but Carlos finally got things worked out for us. We hopped up in the back of the truck which, like many local trucks, is outfitted with pipes welded together which run the sides of the truck and overhead so that everyone can find two handholds. This would be a both-hands-holding-on ride. 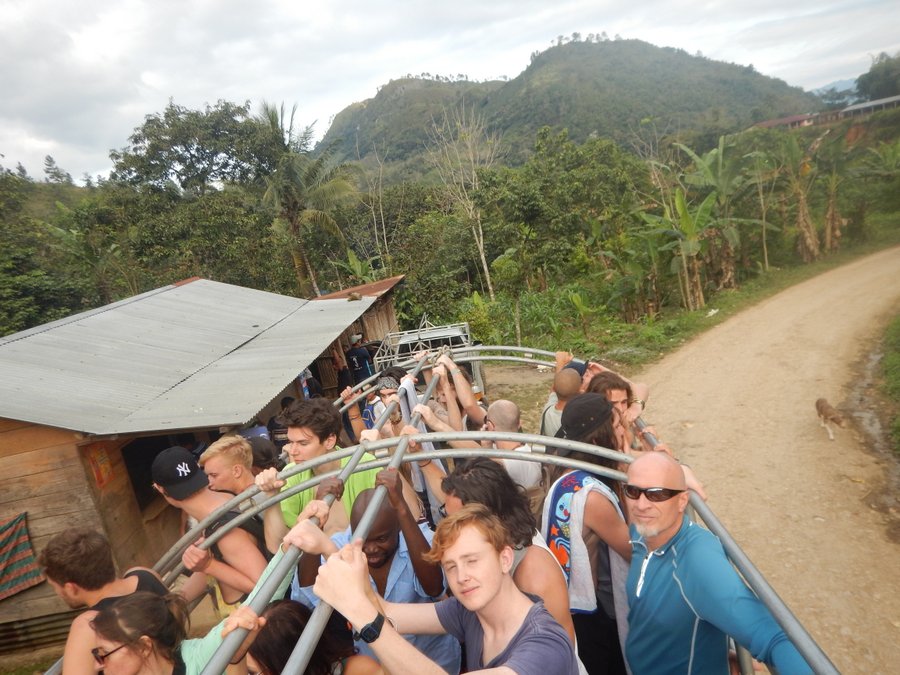 We left town on the little one-way rocky road and climbed along through the country. We passed a lot of corn stalks which were planted on the sides of the mountain on every inch of cleared soil. There were a couple of small towns. Ladies in colorful skirts walked up and down the roads, often with a pan of corn balanced on their head and a child at each side. About halfway to the park, we were held up for about twenty minutes because a religious procession was taking up the entire road. About 50 people were walking along, carrying candles. At the center of the procession was a group of about six men carrying something. It was covered with garlands of flowers and paper. There were three ladies in the lead carrying huge bouquets of calla lilies. The entire group was very somber and we thought perhaps the object at the center was a small coffin. However, we eventually arrived at a small church sitting right beside the road. The procession stopped and a man stepped forward with a pot of smoking incense. He waved in before the procession for several minutes and the group spread out a little so that we could see what looked like a religious icon being carried into the church. The driver was impatient but we were all pleased to have been held up in this way. 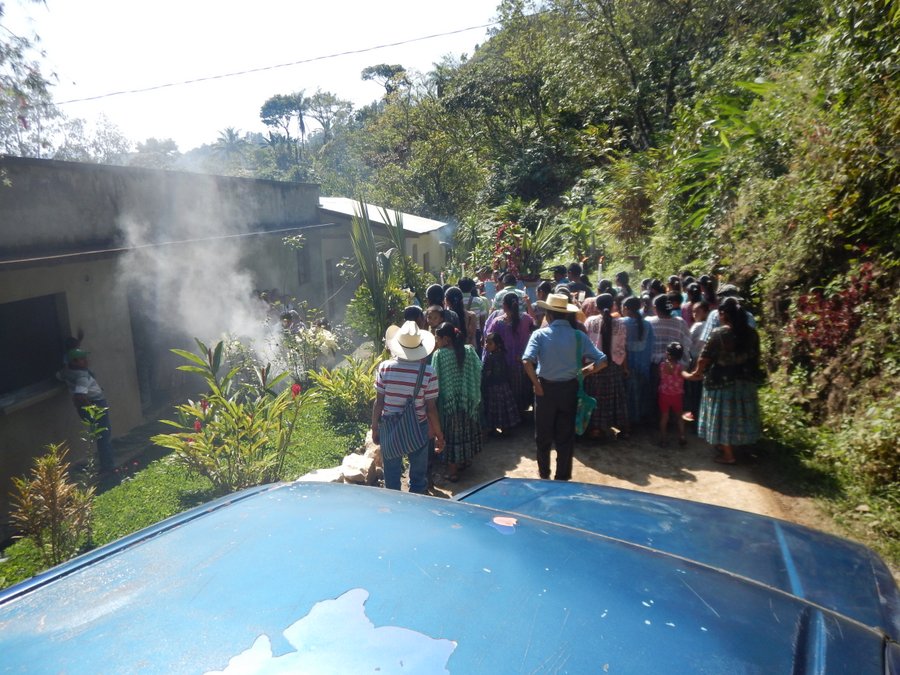 Religious procession with incense burning at the door.

We arrived at Semuc Champey. A handful of children wait in the parking lot to do business each day. Two chocolate sellers about Lily’s age each came right over with their baskets of thin, hand-shaped chocolate patties. There were also a few boys offering to be guides. We didn’t really think we needed a guide but one boy seemed particularly eager to earn a little money showing us the highlights. We asked his name and he pointed to the back of his soccer shirt which read “Renaldo.” We decided it might make for a more interesting day to secure Renaldo’s services. After paying into the park, we arrived at a spot where you can either take a hike up the mountain to view the pools from “The Mirador” (lookout) or you can stay along the river and get to the pools much more easily. Jerry, Randall and I wanted to take the hike and Debbie and Lily wanted to head straight for the water. It ended up being nice to have Renaldo along since he knew how the trails would come back together. We were initially going to have Debbie and Lily wait at the trail head for us, not realizing that the hike was about an hour long and that it was best to go on to the pools after the Mirador than return the way we came. 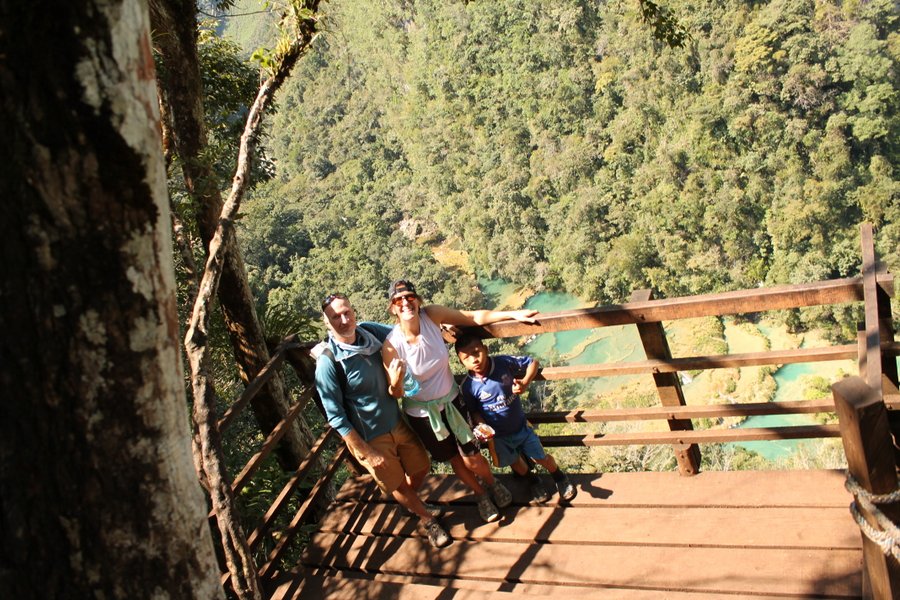 Our guide and us at the Mirador.

So for the next hour, the guys and myself slogged straight up a steep incline following an extremely fit nine-year-old soccer enthusiast who perhaps wanted to get a couple of tours in that day, not just one. We asked a few questions along the way, not so much wanting the information but hoping to distract him from his rapid pace. His English was pretty good but, I am always trying to learn new Spanish words and he couldn’t really help me out there. We soon figured out that, like most Mayans in these remote areas, he spoke mostly Ki’chi and wasn’t able to decipher much of my poorly spoken Spanish. Once we got to the Mirador, another guide heard me call our guide Renaldo and informed me that Renaldo was not his real name. I am not sure the adult guides are especially happy to see nine-year-olds taking up their business. 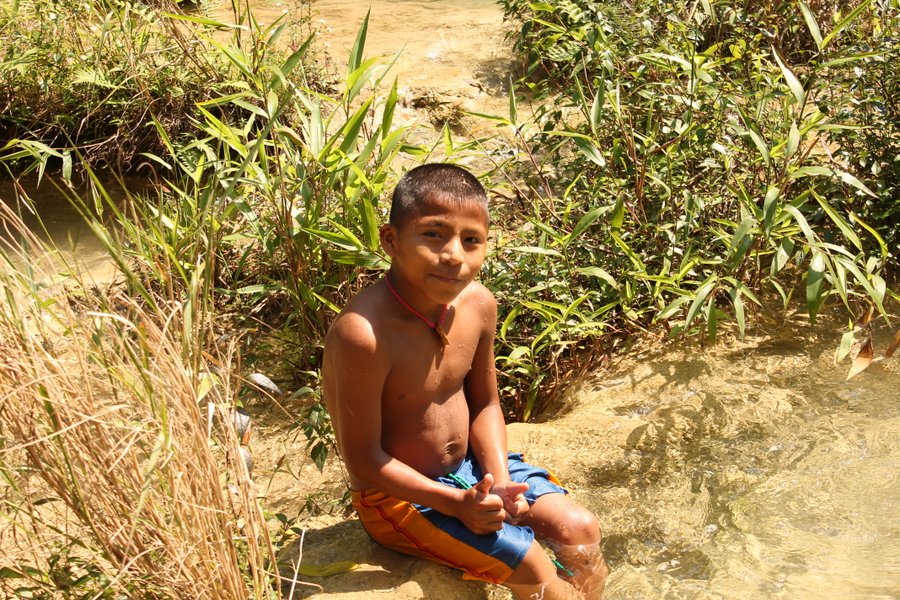 Renaldo cooling off after the hike.

The view from the Mirador was worth every step to get there. We all three did hesitate just a moment, though, when we reached the deck built into the side of the mountain. The Guatemalans are just so occasionally reckless in their construction standards. In fact, the bridge the pickup crossed to get to the park was a fine example of Guatemalan neglect and “it’ll hold” bravado. So, having come this far, you just tell yourself it hasn’t fallen yet and step aboard. In the jungle, even climbing as we were, we saw nothing but leaves and vegetation and the occasional fruit vendor set up along the path. Finally at the Mirador, a window in the jungle opened up to allow a view of the miles and miles of sloping treetops. At the bottom of the intersecting slopes where the river flowed along nice and wide then narrowing to a waterfall. After the waterfall, a chain of limestone pools shimmer quietly in the sunlight. Each pool held turquoise water fringed with pale green plants and rocky pathways. One of the unique aspects of Semuc Champey is that most of the river plunges underground after the waterfall, leaving the pools in a sort of tranquil peace while the turbulence shifts underground. We took a few pictures and then headed to the waterfall. 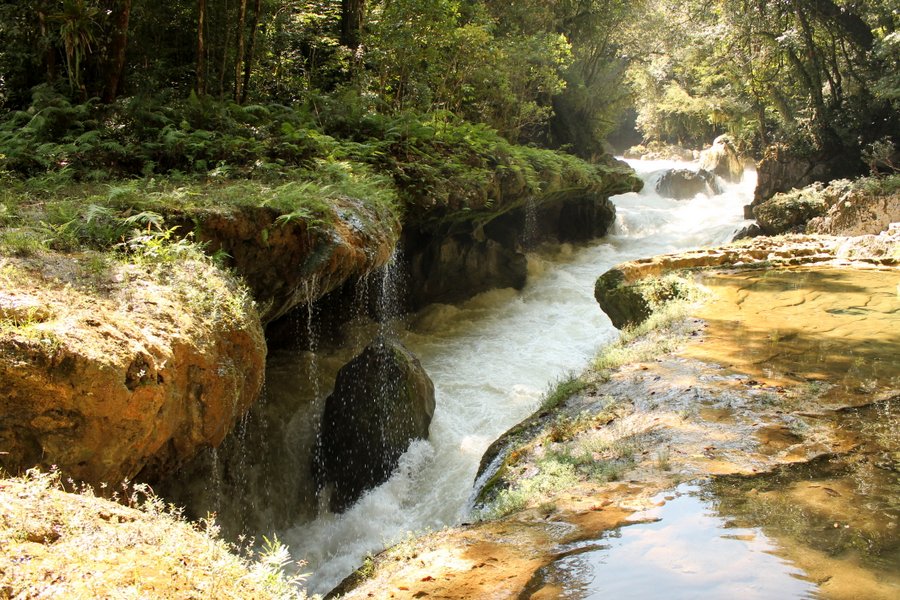 The waterfall which leads to the shelf where the river plunges underground. 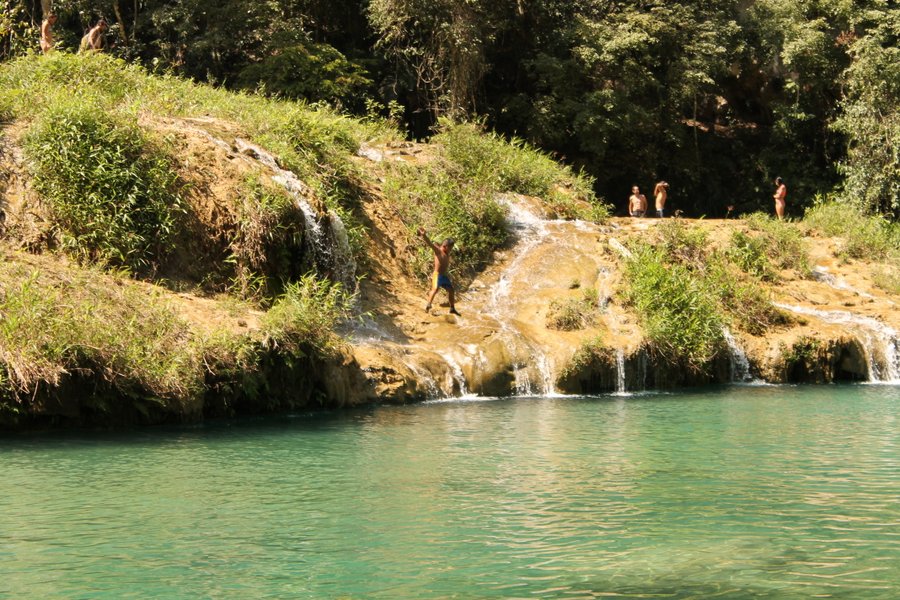 Renaldo even showed us the best jumping spots.

The path back down reached the water in about fifteen minutes. Our legs were seriously complaining at this point. However, we could hear the water crashing and knew we must be close. We finally arrive at the bottom of the falls where the water crashes through a rocky gorge and flows down rock shelf into a mesmerizing whitewater-covered hole in the ground. The obvious questions sits in your head, “What happens to anything live which goes down with the water?” The hole was actually roped off to discourage standing right at the edge. We took a few pictures and Renaldo assured me no one ever fell in. He confirmed that our amigas would be right around the corner and we were anxious to regroup after the long hike. We found them shivering in the deep shade at the lowest of the little natural pools. However, once we got there, we ventured more into the sunlit pools and watched Renaldo take a few jumps from the boulders. We swam awhile and worked up an appetite. Renaldo assured us that excellent food was available back at the gate, cooked by his mother, of course. We hiked back out and bought a few plates of grilled chicken, beans and rice to eat with our PBJs. Renaldo joined us and his sister and fellow amigos gathered round to provide some interesting lunch conversation and share in our PBJ sandwiches. 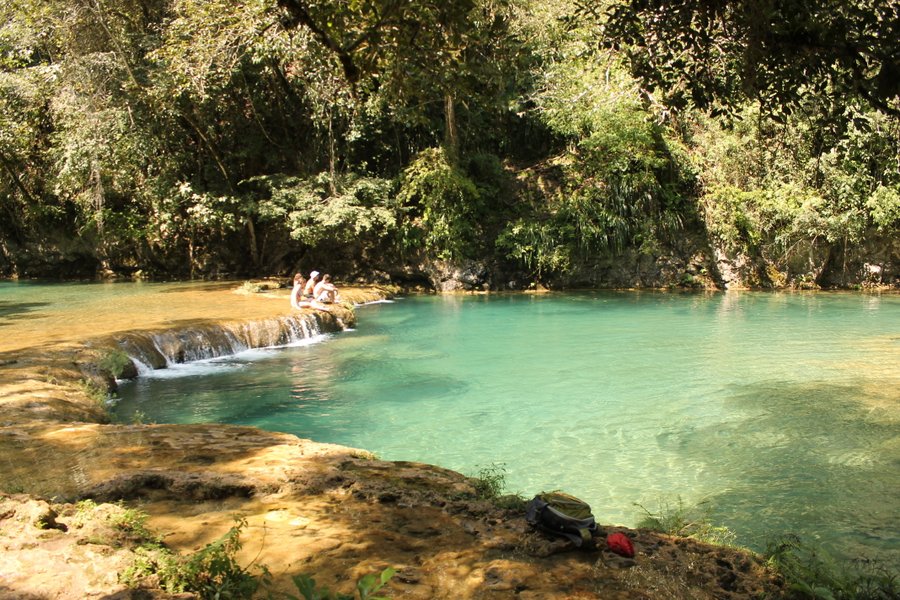 The water was so clear. Lily and Renaldo spent a long time trying to capture minnows.

A cave tour is available a short walk from the park so, after lunch, we walked back over the rickety bridge to the other side of the river. We got in line with a group of backpackers about to enter the cave. We were all handed a white candle for the tour and told not to take anything in that was not waterproof. We knew the cave was a “water cave” but was not quite expecting this much water. Our first step into the cave was ankle deep with the water level increasing to chest-level before we even left daylight behind us. As darkness closed in around us, we see the first boulder pass looming up ahead. There was a rickety metal ladder affixed most of the way. Debbie sized up the situation and decided to head back out. I figured we would cross over the boulder and just take a look. I had reminded Lily we could turn back anytime, too. However, Lily was fascinated. On the other side of the boulder wall was a run of more chest-level water which got increasingly deep until we were dog paddling in the eerie candle-lit tunnel. The hardest part of navigating the water was never knowing when you would reach a sudden submerged shelf of rock. It was always reassuring to be able to touch the bottom but irritating when your knee found a unexpected rock. We reached another climbing wall but this one had the water actually falling from the crest so that you had to climb and cross rushing water at the top. It was narrow here though and there were plenty of slick handholds to use as we passed candles back and forth and worked our way through the sideways break in the rock. Then there was more dog-paddling through deep water and the line of cavers was getting slower at this point. We finally reached the back of the cave where you can climb up to a high ledge in the cave and jump off into a waterhole below. All of the backpackers were taking their turn. We watched a few and decided to forgo the cliff leap. Randall was wanting to try it but we were relying on his occasional assistance and so he stuck by us and didn’t try to offload the headlamp/camera/candles which he was carrying. 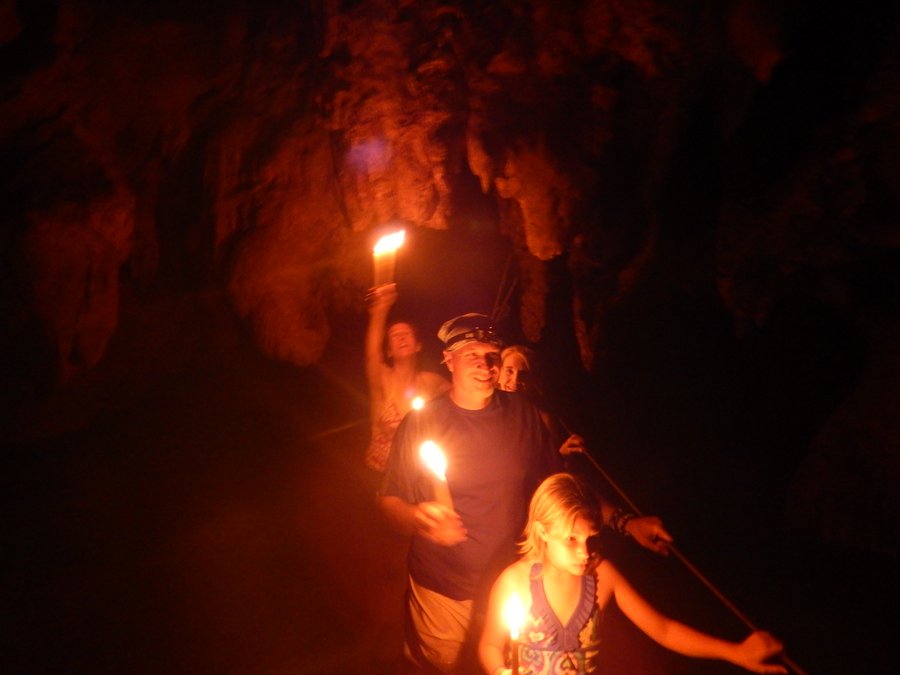 Lily in the lead through the cave.

We turned around to head out the same way as coming in. We wound through all the same spots. Close to the entrance, however, the guide was having everyone jump through a water shoot instead of crossing one of the boulder walls. We jumped through the shoot with no problems but then the guide started heading back up over the boulder. We tried to say we thought the way out was down the tunnel but he continued to climb. At the top, he realized he was turned around and admitted he was a new guide. Nice! Lost in the cave with a new guide. So we headed down the tunnel and were grateful to finally see daylight peeking through up ahead. After so much excitement, we were glad to return to El Retiro and lay in the hammock for an hour before nightly happy hour and all-you-can-eat-while-its-there buffet.