We left Belize a little sad about how much we missed. Thank goodness, it will be right next door to us awhile and we can go back.

We checked out of Belize Wednesday by taking the Hokey Pokey Ferry to Big Creek. I don’t know what they think is so Hokey Pokey about their ferry. If they rode around on Foxtrot awhile at our average cruising speed of 5 knots, they would rename HPF the Screamin’ Fast Ferry. Anyway, it was kinda fun to fly up the creek and back. Check-out went fine except for the Belize Port Authority asking if we paid our fees to their office upon arrival. We checked in at San Pedro back on Commonwealth Day and we thought they had put us through the entire process that day. However, apparently, there was one more office we were supposed to visit. Anyway, we got a lecture about it and told many times how lucky we were that we weren’t boarded by the Navy and issued a $3000 dollar fine. We played our ignorant redneck routine, paid the appropriate Port Authority fees and then we were on our way. 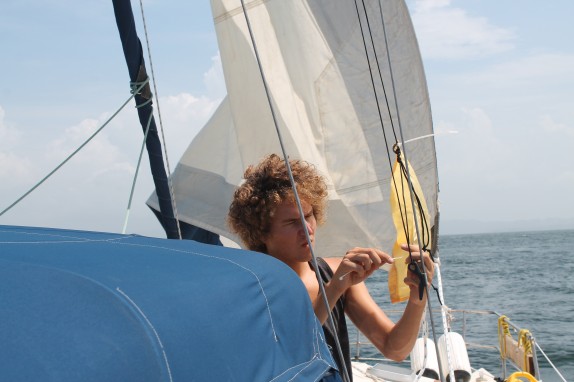 We left early Thursday for the Placencia to Livingston sail. We arrived in Livingston mid afternoon and anchored next to Jeff and Rosa of My Peace. They dingied over to our boat to welcome us to the area. When they found out we were new to the area, they gave us a lot of really good advice. They suggested a couple of anchoring options for that night which they felt was much better than staying in Livingston and getting robbed as we didn’t have time to make it to the safer part of the river before dark. They also pretty much nipped to the bud the marina we had planned to stay at. Many of the marinas are already full so we had plans to stay at Bruno’s which is centrally located. From there we could scout out the options. They said Bruno’s had a really bad reputation and Jeff got on the phone and started calling marinas for us right away. By the time he left, he had found a couple of slips to choose from once we got there. They were headed the other direction to a new resort at Bahia de Amatique so I hope we get to see them again sometime down the road. 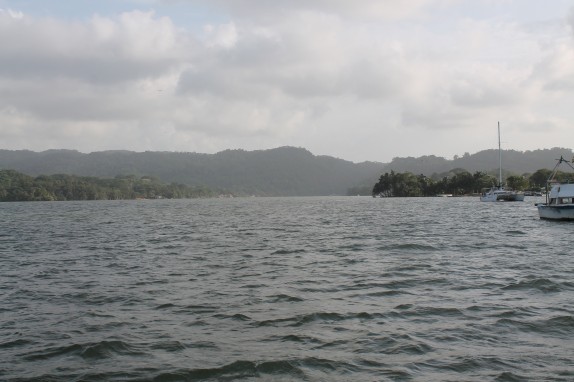 To cross the notorious sandbar outside Rio Dulce, you line up with the south bank of the river and maintain a heading of 222 degrees. The mouth of the river is a little hard to make out from that far out.

After a little wait, the Guatemala check in party came out to the boat – customs, immigration, sanitation, medical doctor, entry agent and port authority. They filled out paperwork on the boat and Randall had to go ashore to pay the fees. The customs officer ended up giving him a ride on his motorcycle in order to expedite processing. Security is very tight in most of these offices with armed personnel standing around to control lawless cruisers. Randall carries a three-ring binder to these meetings which contains our boat documentation, copies of passports, crew lists, store lists and zarpes (clearance paperwork from previous harbors). When he finished checking in at the customs office, he replaced a sleeve in the binder and snapped the rings shut. The office’s security system identified this sound as a gunshot and an ear piercing alarm went off and the armed security guards went into Rambo mode. Thankfully, Randall was not shot nor the binder confiscated. They did admit that the security system was a little sensitive. 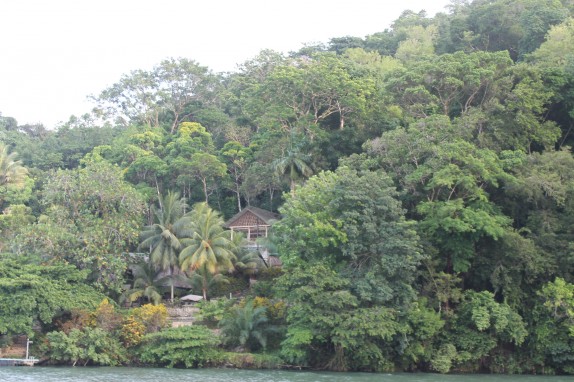 Some of the homes are right on the water and some built up the side of the banks.

We started up the evening in a waning light. This is just the scenario most cruisers avoid because most do not want to anchor in the river anywhere short of the marina district. However, Jeff had given us two different places to anchor safely, one of which had a boat at anchor that night.

We spent about an hour making our way up the river before the night overtook us. Rio Dulce is very wide and deep at the mouth. We had mentioned to Lily that we hope to do some hiking in Guatemala and she gazed at the jungle covered cliffs in disbelief at how thick the forest is. We could hear bird calls back and forth across the river. We strained to catch any howler monkey cries but did not. Several fishermen were still at work and Randall noticed that they were setting their nets across for river for the night. This is yet another reason not to try to go up the river in the evening but, luckily, we did not get tangled up in any of the nets. 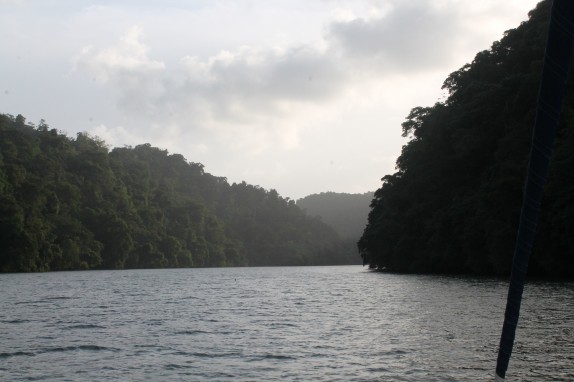 Going in it sort of occurs to us that we will loose light faster with the steep river banks but we didn’t have far to go.

We finally found our anchorage next to a building called Roundhouse. SV Orion was there as described by Jeff earlier that day. We set our anchor, turned off the motor and had the most peaceful evening gently bobbing in the river. We got a downpour of rain through the night but it moved off by morning.

Friday, it took us about five hours to make the rest of the trip through El Golfete, where the river widens, and into the marina district around Fronteras. We anchored right by town and Randall and I spent a couple of hours checking out the three marinas we were considering. We finally got settled in Mar Marina which is in a really good location in town.

We took a quick tour of town. Lily spent about thirty minutes at the park and tried to meet some kids. She brought me over to serve as Spanish interpreter, thinking I know Spanish for some unknown reason. Randall and Jake said that my first sentence made a little boy hit his hand against his forehead and run off laughing. I must have missed this. I was really focused on how well it was going with the girls. They smile so nicely when they don’t understand a word you are saying. Anyway, the Spanish studying continues.

Here are a few pics. 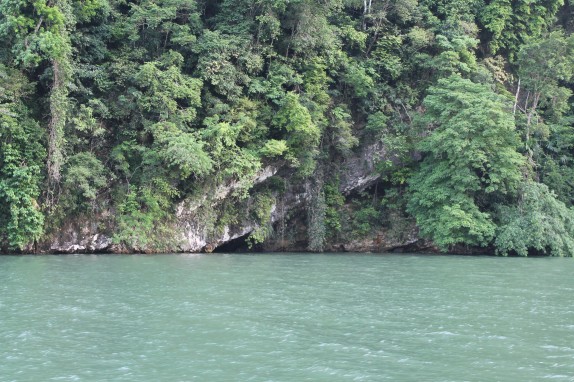 We all want to try some vine swinging into the river. 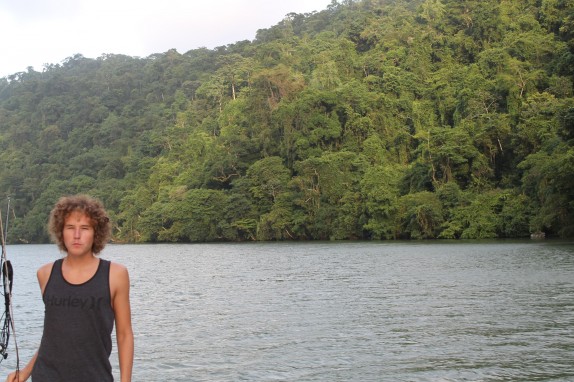 It is a place that makes you look and feel a little small. 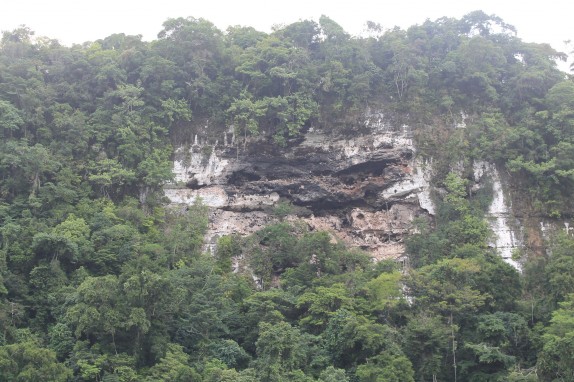 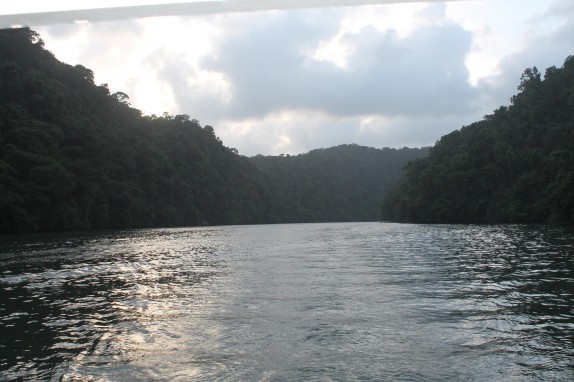 Sun lighting up the clouds ahead. 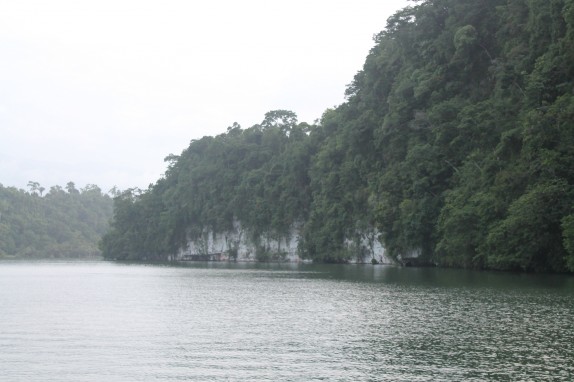 There were plenty of bends in the river and we never quite knew what would be around the next one.

White cliffs stretch along the part of the river and look so pretty reflected in the water. 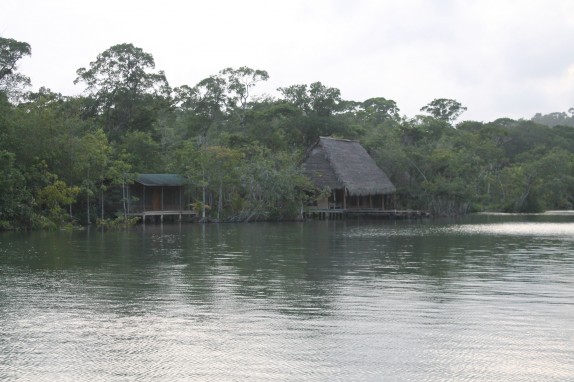 We have seen lots of thatched roofs but they really look at home along a jungle river. 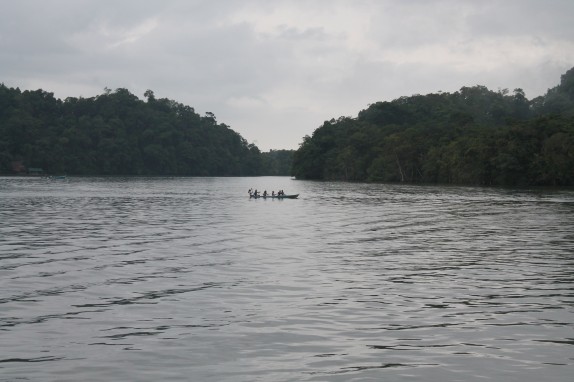 Lots of small boats ply the river. This one had lots of young rowers. 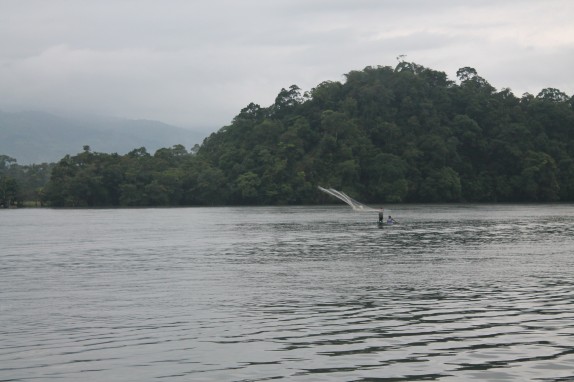 Fisherman casting his net out. 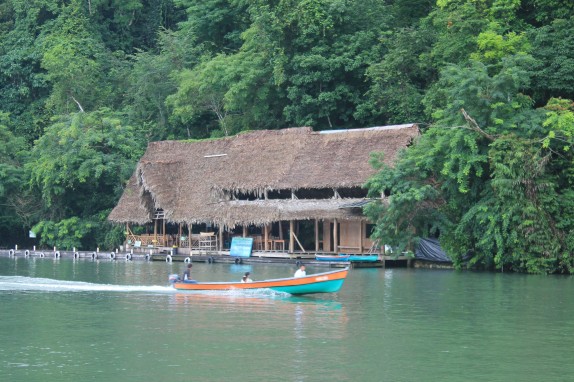 There are not any roads in this area. All the traffic is on the river, some going slow and some going fast. 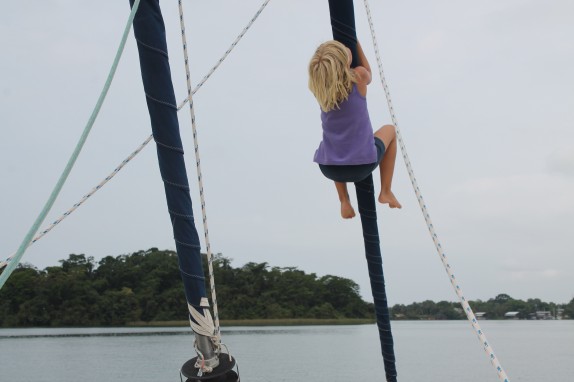 Climbing the jib. She has reached her goal of touching the sheets wrapped part way up.