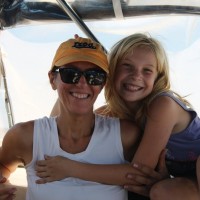 On Sunday, we anchored at Cayo Quemado, formally known as Texan Bay. We headed up to the restaurant for one last hot meal with sides. It would be sandwiches or an occasional one pot mish-mash for a few days underway. Yollata and Oceana were there for dinner, too, so it was great to have company. After dinner and back on the boat, Lily and I got in a game of Bananagrams and, after that, she lay her head in my lap.

“I miss Fern,” she said with a sigh. I reminded her that the Marathon ruffians are always up to something interesting. This brought her mind only to the next trial – a crossing. “I don’t want to get sick,” she said, making a face to show that the taste of passagemaking was quite vivid. “Maybe it won’t be so bad,” I said hopefully but skeptically. “You could take something and go to sleep,” I added. Another face, quite worse this time. It might be terrible to be seasick but Lily finds daylight grogginess completely unacceptable. 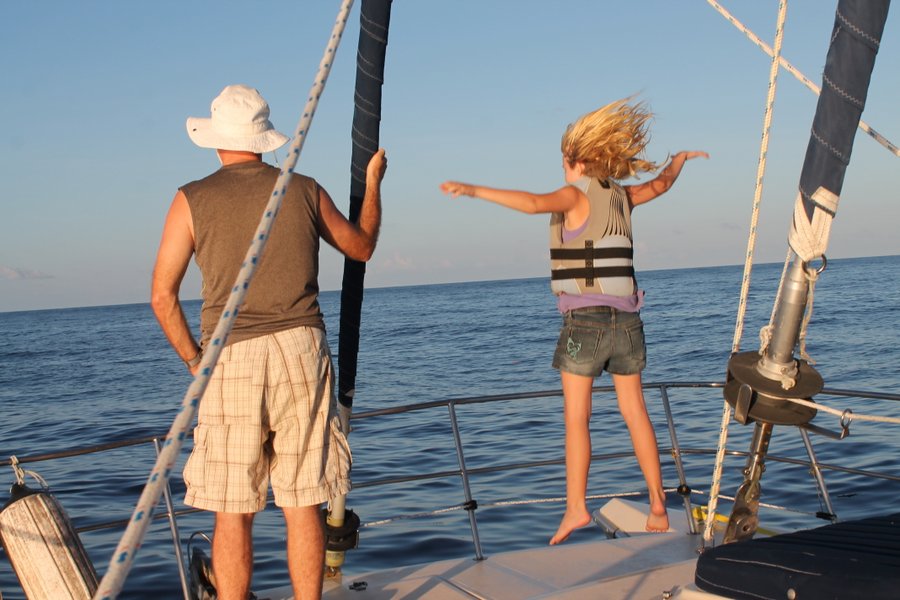 There is a lot of jumping, trying to catch maximum air as the boat dips into a trough.

Anyway, it was all for naught – the worry, the dread and the constant imagining of what could go wrong which I admit to indulging in overly much, too. It was a picture-perfect passage.

We had a breezy, gentle four-day crossing from Rio Dulce to Isla Mujeres. Winds blew a gentle 5- to 10-knots during the first two days out of the west. West wind was quite unexpected for that area but just what we needed to work out of the Bay of Hondurus. Winds tapered off to stillness each full moon-lit night. The current carried us north even when the wind died and the waves were just a few feet licking playfully at the hull. Yes we motored but not enough to get that “I can’t take the motor any more” feeling. 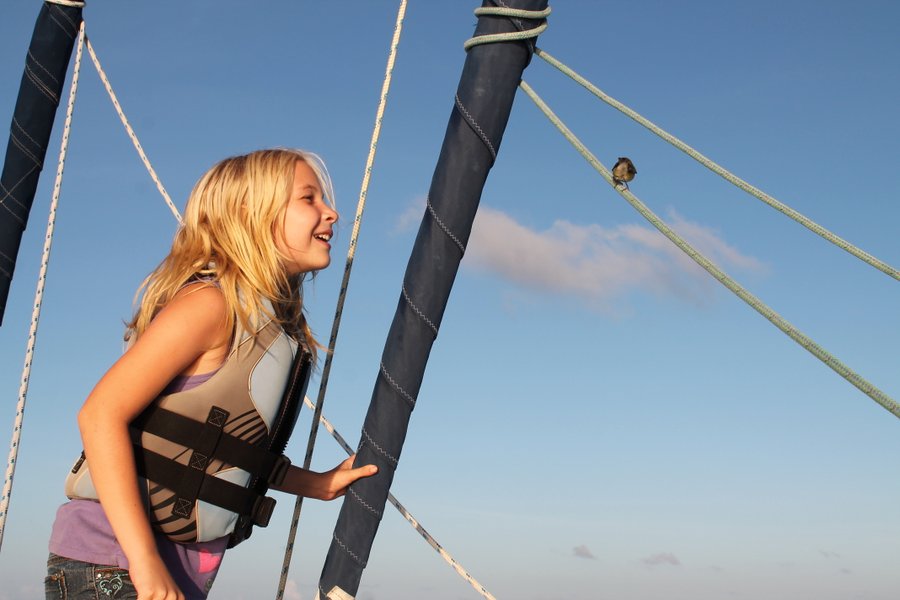 Lily loves the little birds that come for short rides. This one spent the night.

We caught one fish – a Cero Mackerel – the first day out and stretched him through two-and-a-half meals. Lily is at her most cheerful when there is a fish on the line. The anticipation starts with “Fish on! Fish on!” as soon as she hears the line running free and builds to a fevered “How big is it? How big?” as Randall reels. She is no less enthusiastic about eating it. I cooked a few fillets as soon as Randall got them cut up and Lily came down to the galley to handle the seasoning. She searched around for her favorite garlic seasoning packet and then, finding it not salty enough, threw on some other selections from the limited options, all the while chattering, “This will be good, Yes, this too. Let’s just try this too.” Randall made fish tacos the next day and they will henceforth be the bar all future fish tacos must reach for. When I went down to clean up after the tacos, there were three small portions left which I could not bear tossing so they made their way on to a plate the next day, completely cold, with carrot sticks and cucumbers for sides. 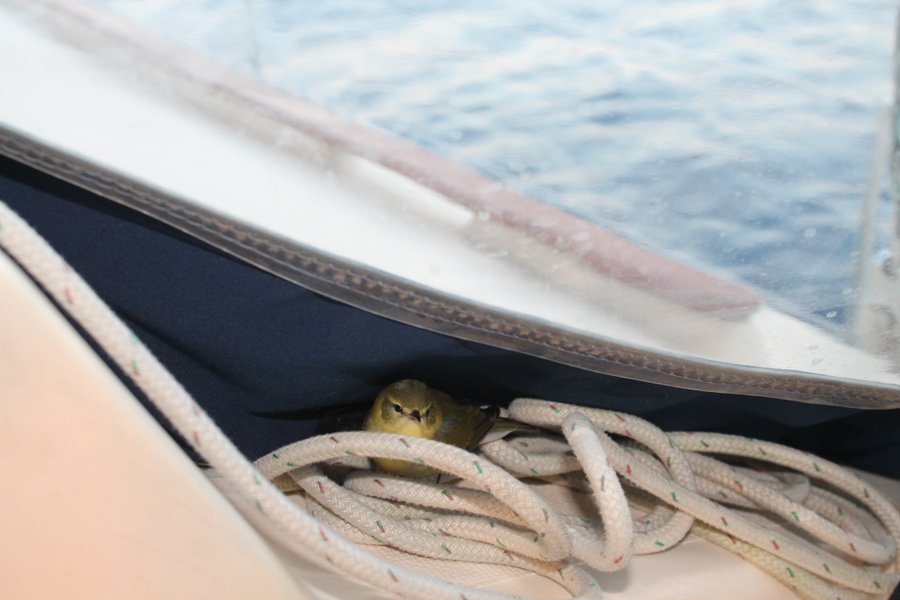 Little birdie hopped around the boat looking for a nice berth for the night.

Our second fish was a beautiful Mahi Mahi and Lily let loose with “Maaa-hiiii Maaaa-hiiii” as soon as we could see neon green flashing underwater. We got the fish right up to the boat and immediately remembered, and cussed, our failure to replace our discarded rusty gaff. Yes, we really needed a gaff for landing this sweetie. I got the fish killer – whiskey in tiny sprayer – and aimed for the gills as Randall held the thrashing fish at the side of the boat. I needed the bottle to pour with but, as Randall and I were fumbling around discussing what to do to subdue her, she fell away. There should be a special name for the dejection of standing holding a fishing rod which has just gone from hot-wired craziness to lifeless. We took this video of our lost fish if you want to mourn with us:

Lily and I reread Tom Sawyer aloud to each other during the passage. As we sailed gently offshore, Tom, Huck and Joe were drifting down the Mississippi, trouping through the middle of their funerals and then basking in the glory of being the risen dead. Perfect reading for a Halloween sea passage. Lily still laughs hysterically at Tom and his keen sense of what might make for an acceptable way to pass time – work, school and church having all been tried and found wanting. 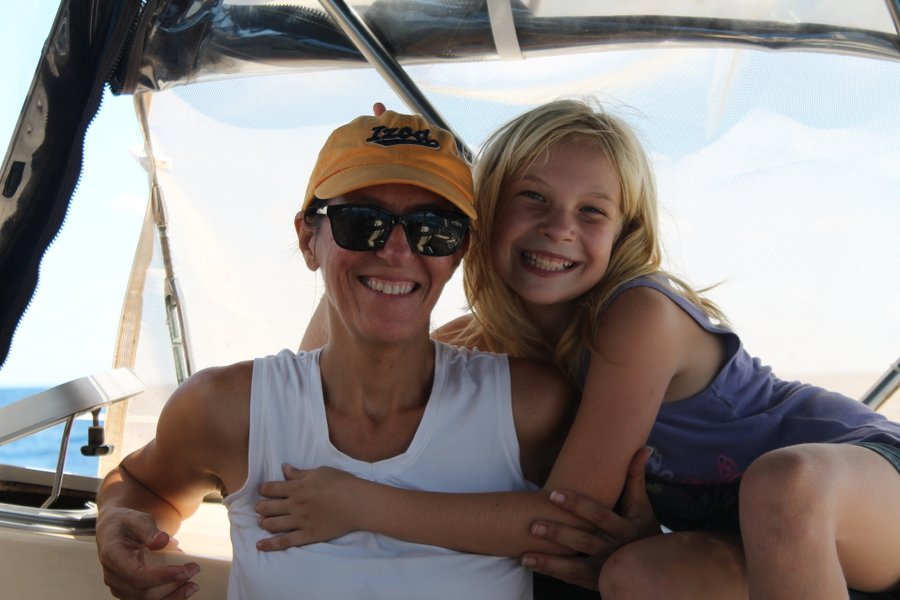 The crew – happy about mild weather and smooth seas.

We finally got some east wind on the third day but it puffed meagerly. Randall did the arrival calculations and confirmed that we might be able to arrive just before dark on the following day, Day 4, if we keep up the motoring through the quiet night and the following day. On the fourth day, we had some of the lightest wind and even got held up by some counter current as we motored slowly past Cancun. However, we made it with plenty of light for entering the harbor. We stayed anchored one night, checked in on Friday and decided on a week’s stay at El Milagro Marina where Lily has already made a friend. 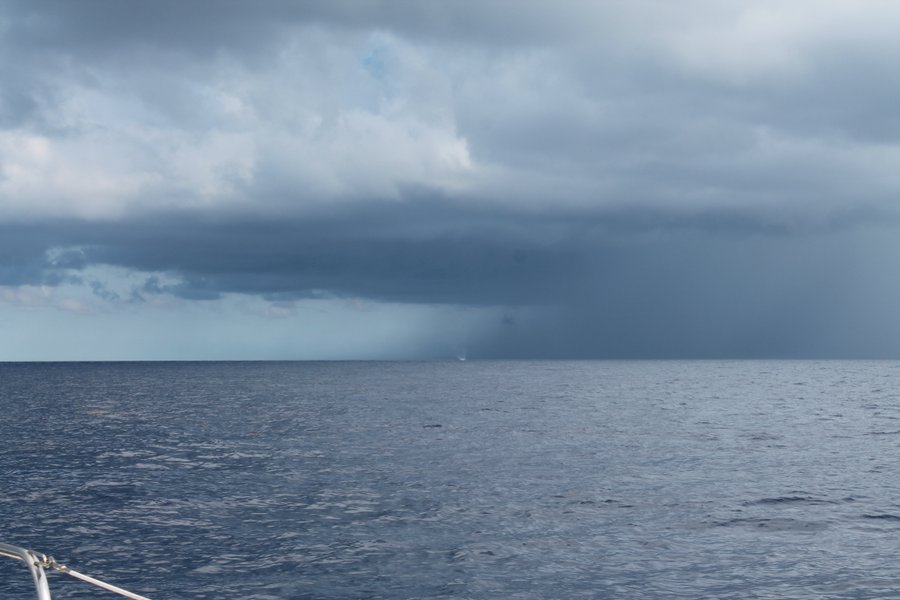 Between Cozumel and Cancun, we spotted a waterspout in an upcoming squall. It is small in the picture but it is a little white circle in the middle of the horizon. There was five minutes of laser focus on this little piece of excitement. 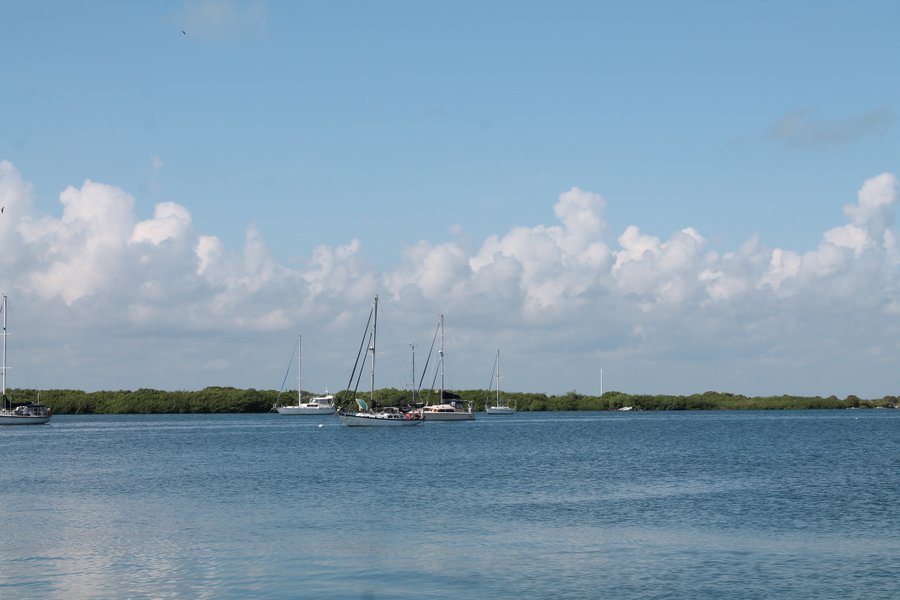 Foxtrot at anchor among a handful of other boats at the Isla Mujeres anchorage.

Also, we arrived just in time for dia de los muertos – Day of the Dead! There is sure to be fun tonight as we try to make our way through all the Mexican ghosts and goblins. We can already tell that there will be few Disney princesses running around tonight. Even the toddlers are painted up as sugar skull queens and bloody vampires. As far as we can tell from last night’s prequel, “Cute” is not the visual they are going for here.