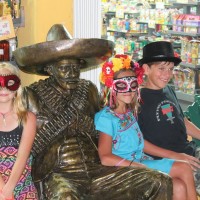 El Milagro Marina also has a few rooms for rent and Lily played all day long with her new friend Christina. Her family had plans to walk down to the plaza for the Dia de los Muertos and we tagged along with them. Linda, Cantrell, Victor and Christina are from Tennessee and have vacationed on the island several times. Linda had booked this vacation to coincide with Dia De Los Muertos and it was fun to have her fill us in on the meaning of the some of the popular Muertos customs. 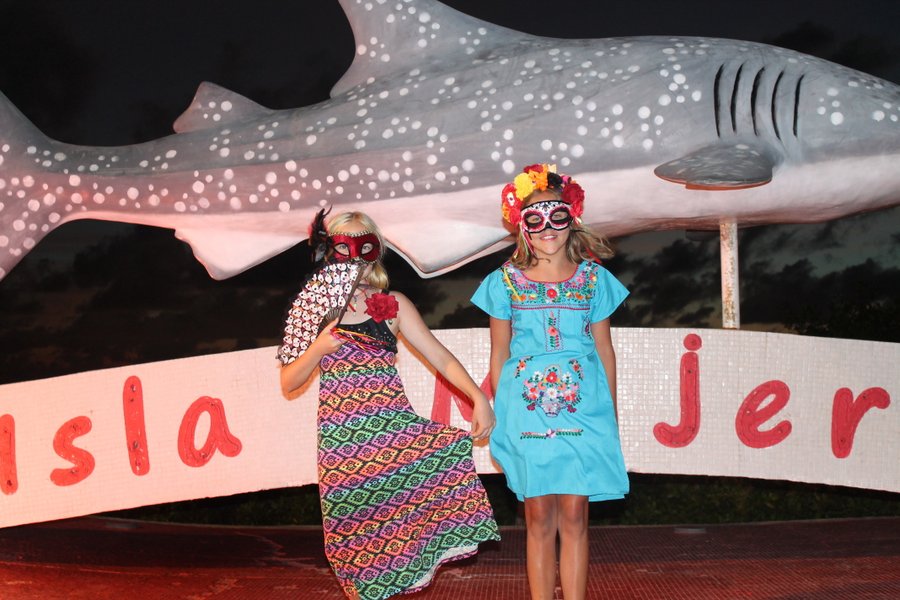 Lily and Christina posing in front of the Isla Mujeres Whale Shark statue. 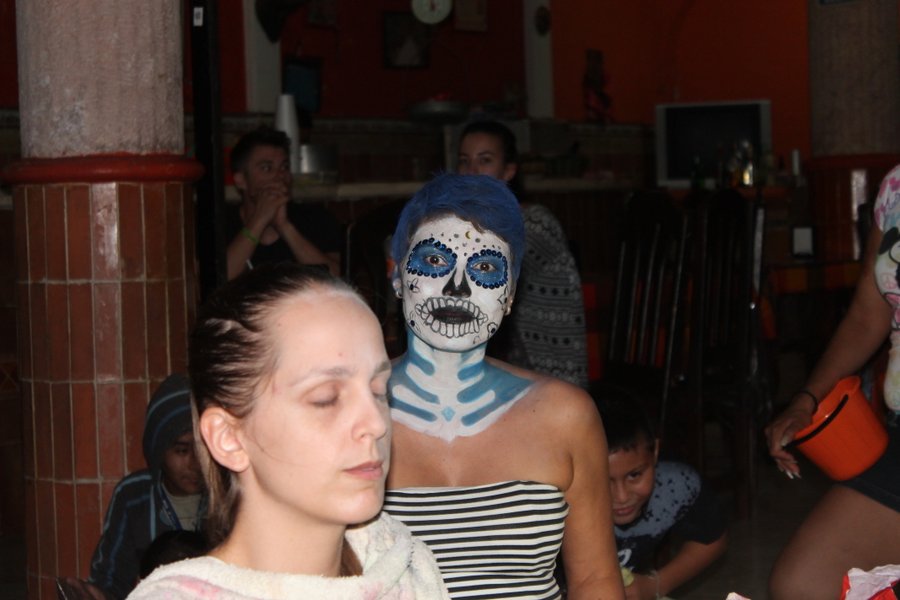 The lady in the foreground is sitting to get her face painted while the one in back just got all finished up. 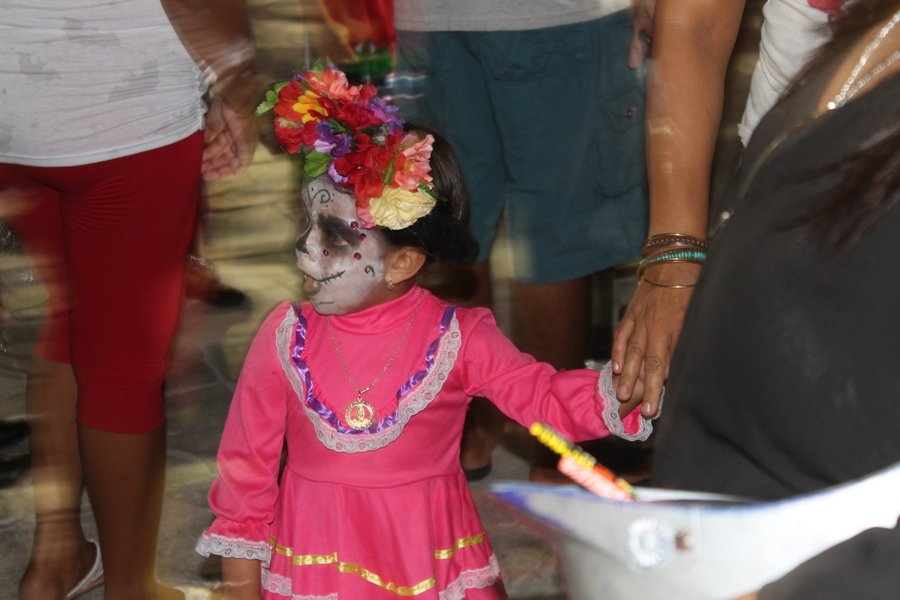 The baby girl skulls whose necks seem barely able to hold the flower crown up have my heart – all of it.

Dia de Los Muertos is actually a three-day religious holiday which also included All Saints Day and All Souls Day. All Saints Day is set aside to remember and honor children who have passed and All Souls Day is for remembering friends and family. Both of these days will involve visits to graves to set up personalized shrines for the dead which will include pictures and favorite items of the deceased. We may peek in at the cemetery today and see if we can inconspicuously catch a glimpse of this part of the holiday. 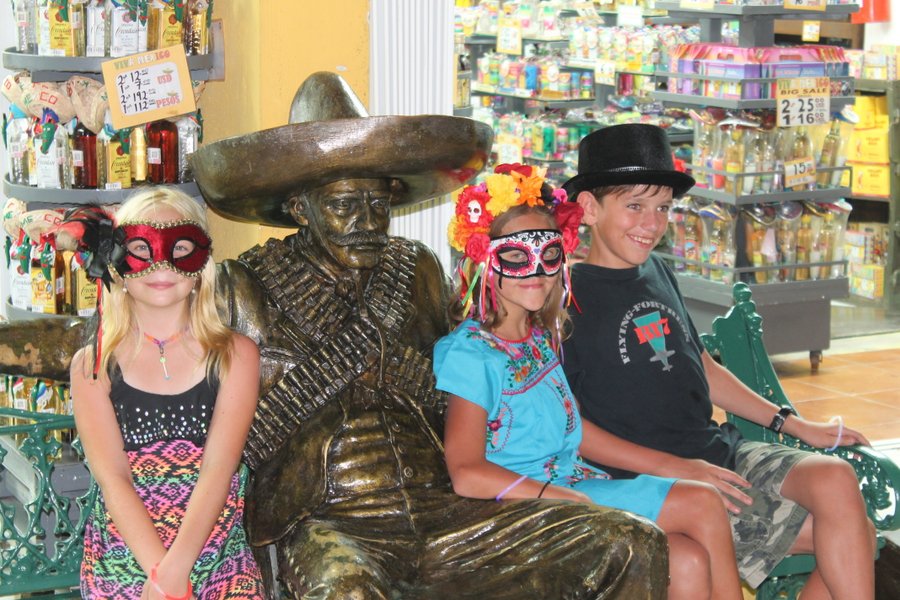 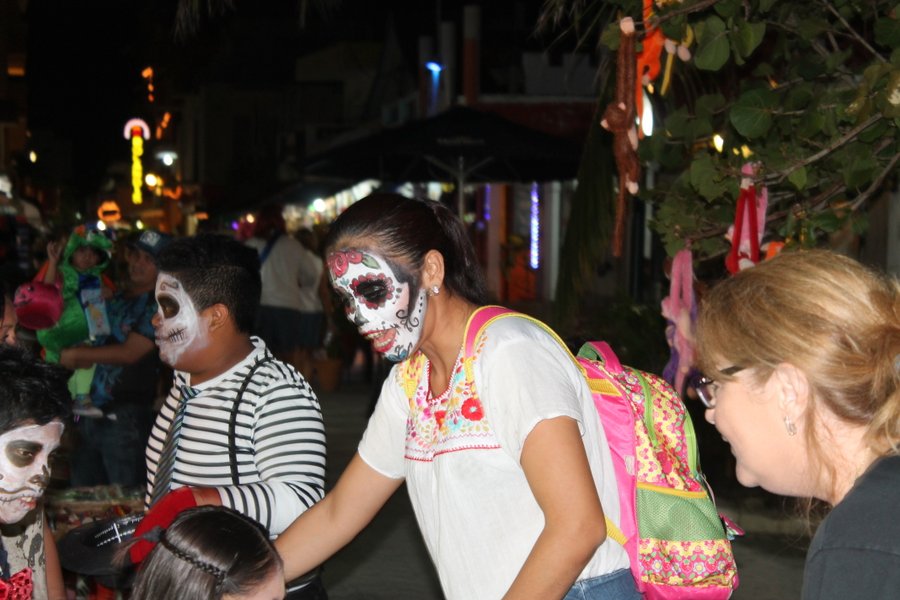 This one was very colorful. Linda is also in the corner of the frame handing out pesos to the kids. 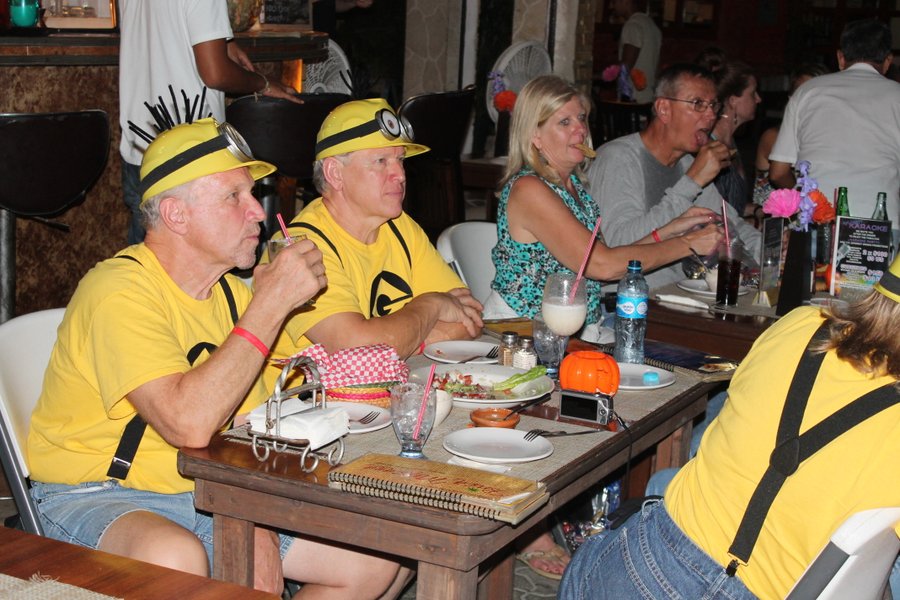 “What are they supposed to be?” Randall asked. “Minions,” I said uncertainly. We are perpetually behind on pop culture.

But the kick-off – Dia de los Muertos – is a little more playful while still focused on one thing – the dead. Most of the trick-or-treaters were some form of walking dead. There are few masks since most of the effect is achieved with face paint. The face will be painted white so that the scars, stitching and dripping blood stands out boldly. The girls often add colorful sugar-skull patterns and crown the artwork off with a corona of flowers. Everyone paraded the streets with their buckets for candy. Many of the adults had come prepared with bags of candy to hand out and some of the stores were ready as well. I have no idea if they go house-to-house, too, in the more residential areas but public spaces like the town plaza are much more alive and in use in Mexico. Yes, here on the island it is partly driven by tourism but some of the Mexican travel blogs I read mention this about small town life here, too. 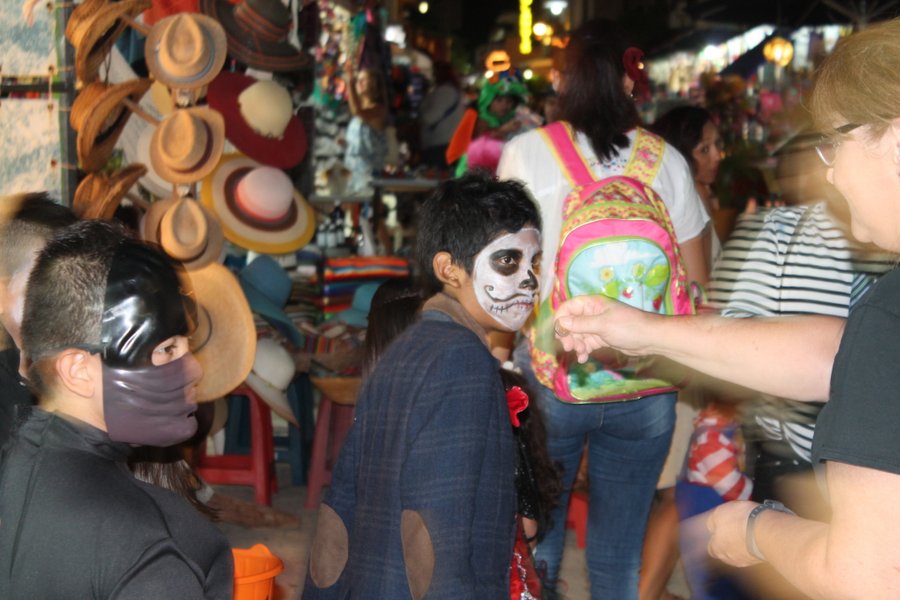 Perfecting the mouth is one of the first challenges for the face painters. 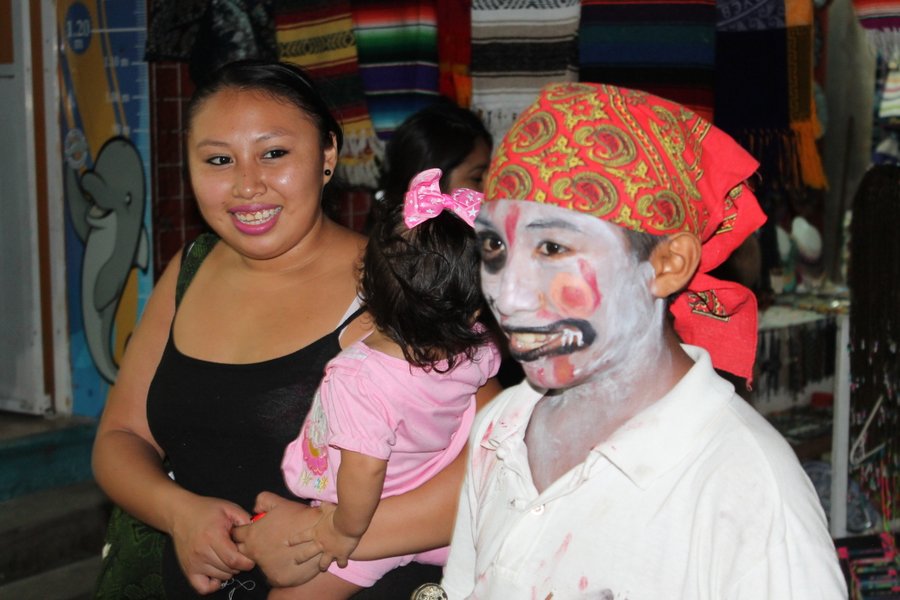 Extra teeth or just stitching is one of the first decisions of the night. 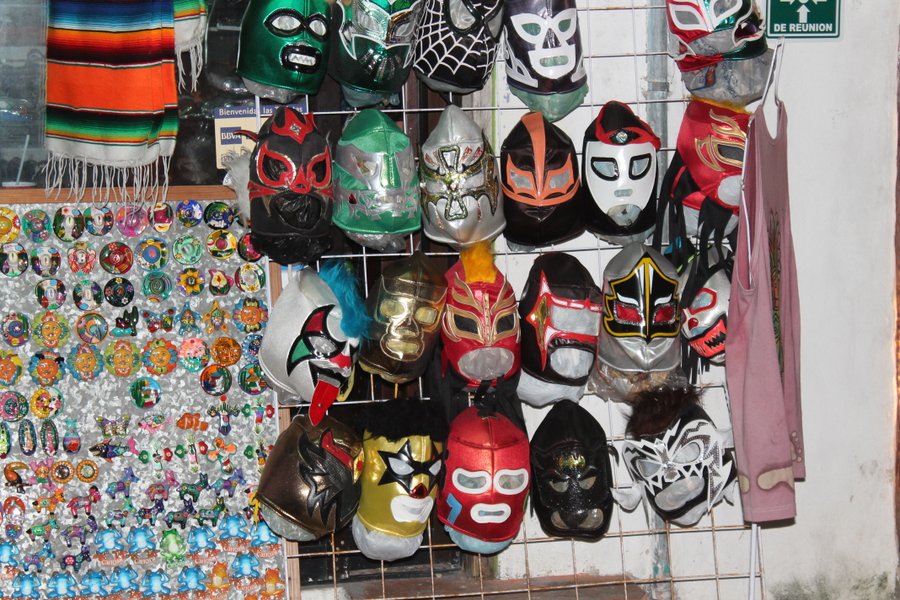 Yes, a few kids wore Mexican wrestling masks and we could have joined in the fun for a few pesos.

Christina and Victor has also come prepared with customs and Linda generously lent Lily a lovely mask and fan to wear. After gathering up a load of candy, we got back to the plaza in time for a dance performance featuring what seemed to be lots of dances from different regions of Central America. The dancing was lovely and the kids sat watching for a long time. Or maybe they were just eating candy and talking. Not sure. 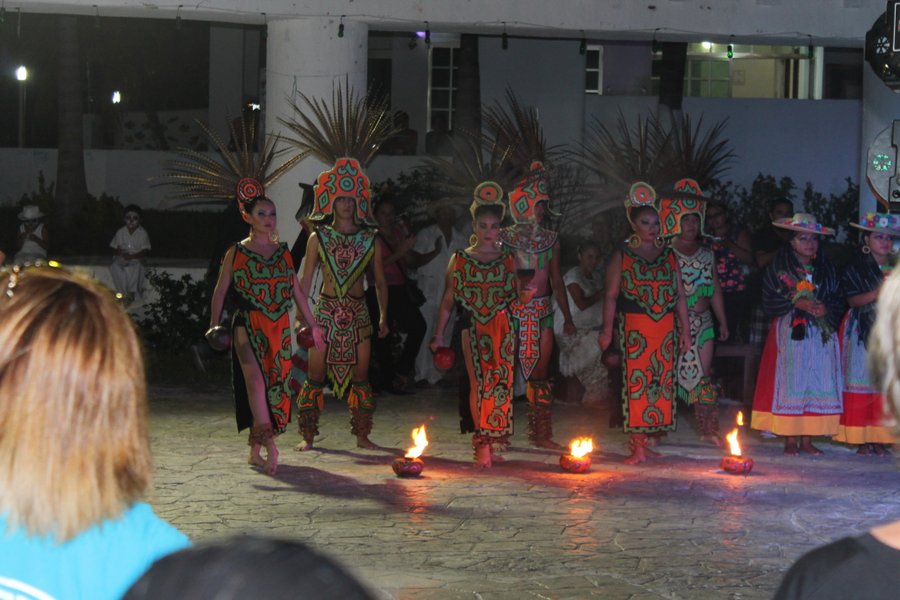 Dancers in Mayan costumes performing a really cool dance with lots of graceful kicks and jumps. 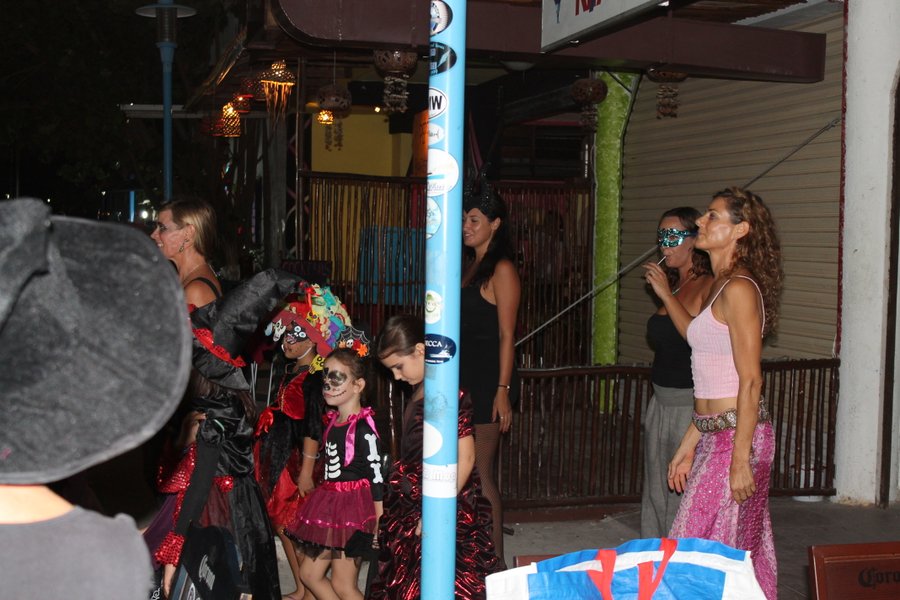 This group of dancers were performing to Thriller. They traveled the length of the main strip giving performances along the way. You gotta love people that plan stuff like that and get the kids into it. 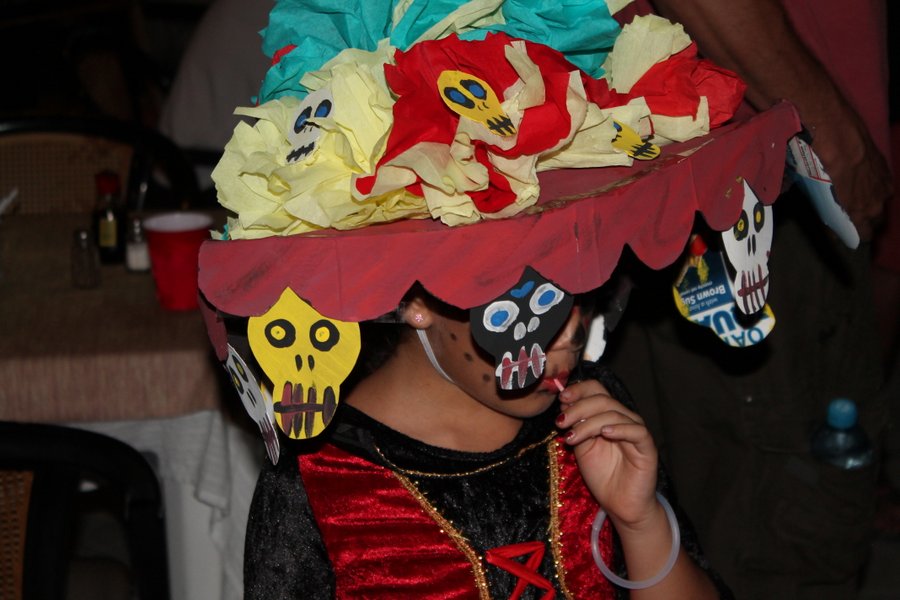 Close-up on one of the Thriller dancers taking a candy break. Big hats are also part of the “Katrina” style costumes. Katrinas are skinny skull-like paper machete figures which are made for the weekend. 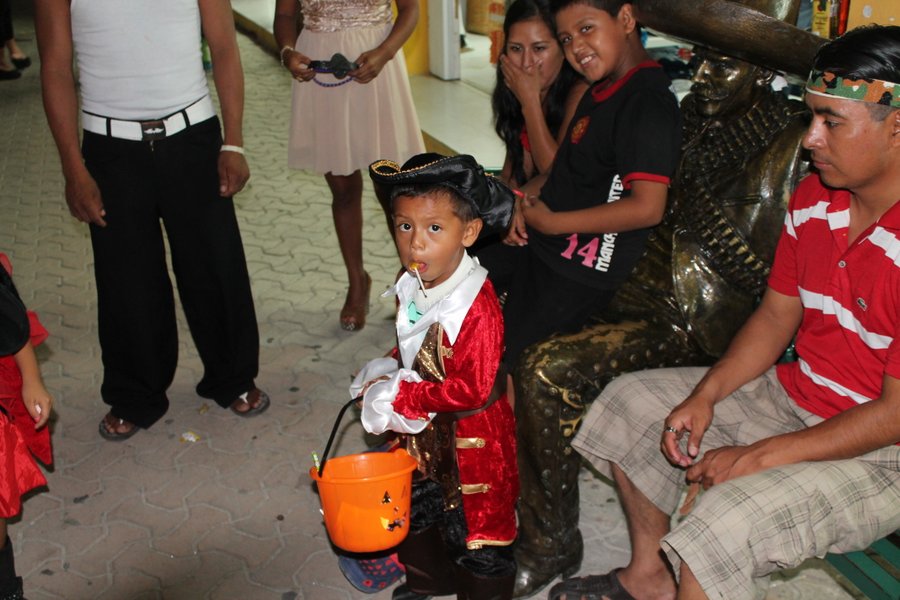 And, of course, a pirate.