I got these great pics below from Czech & Mate this week. Jerry and Debbie are fellow Oklahoma-water rats turned ocean sailors. They are from Drumright, OK, but we met them in Kemah where they bought their Hylas ‘44. Jerry had chartered a Hylas ’44 and, as he tells it, it was love at first grounding. Sailing in the Caribbean is beset with frequent groundings. Jerry had to get a towboat to pull him off a high spot during his and Debbie’s Virgin Islands charter. Once safely in deeper water, Jerry expressed concern about the boat bottom. The tow captain’s response was sales-brochure kind of stuff – “No worries. It’s a Hylas.” The Windy Crest sailing club has been following Jerry’s sailing adventure since they left in 2009. Since I have a correspondent onboard, I thought I’d scoop the Windy Crest sailing club newsletter with Czech’s most recent high seas tale. My correspondent, Michelle George, is on her third sail with Jerry and Debbie. She and Randall shared Czech’s bon voyage passage in 2010 and Michelle also crewed on Czech’s 2011 Mexico to Rio Dulce leg. The current trip started in mid-January when they flew to Rio Dulce to take the boat to Roatan, Honduras. Michelle is a fascinating sailor. If she’d start a blog, it would be such a success. She has crewed thousands of miles of offshore passages for a growing list of grateful friends. She is quick with a helping hand but it is her heart that makes her Michelle. She loves people, makes them feel very special and, as I once told her mother, she makes me sometimes imagine the better person I could be if I worked at it. She emailed Monday to say she was flying home today but had to turn down three crewing offers all from boats that were headed back to the states. However, she brought me up-to-date on the Czech & Mate’s exciting last day out. She, Jerry and Debbie spent months enjoying Roatan, diving with her favorite green eel and catching up with our other Kemah friends, Scott and Cindy of Amazing Grace and Wayne and Elda of Big Fun. They sailed home via Placencia, Belize, and found the Belizians charming and fun. On their last night out, they anchored near Punta Manabiqu across the Bahia de Amatique from the Rio Dulce entrance. The mouth of the Rio Dulce has a shallow sandbar not to be crossed at any time but the highest tide available. As they waited for optimum water depth, the wind kicked up and, during the night, they noticed they were moving slowly toward the pounding surf of the lee shoreline. They decided to pull the anchor and move deeper. However, while attempting to bring in the anchor in the pitching waves, the anchor line fouled the boat prop. It is the dreaded moment to us all – just when you need the engine the most, you don’t have it. They threw out another anchor but, in that type of situation, you never know how well it will set. It was a tense wait in the dark but they were finally able to tell that the boat’s movement toward shore had stopped. When morning finally came, Jerry had to dive down to unfoul the prop. It was wrapped seven times and required a winch to free the last tight wrap. Once back in the cockpit, Jerry fired the engine to see if the prop would turn or if the shaft had bent. The boat headed homeward without problems and they made the short voyage into Livingston.  Now everyone is homeward bound full of stories. For my Oklahoma friends, if you want Jerry’s version, hit a place called Freddie’s Steakhouse in Drumright on some upcoming Friday night.  If you can’t make it to Freddie’s, maybe you can get Michelle’s version by commenting back suggestions for Michelle’s blog name. I’ll go first. How about “www.hitchhikingthesea.com” or “www.whereisMichellenow”? 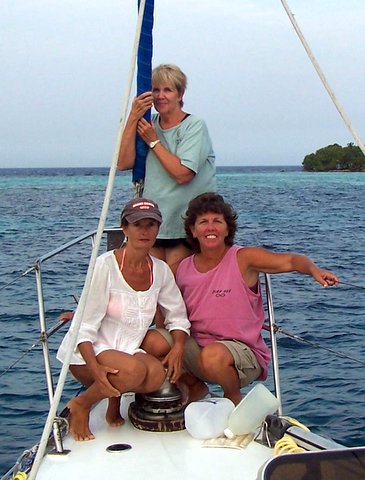 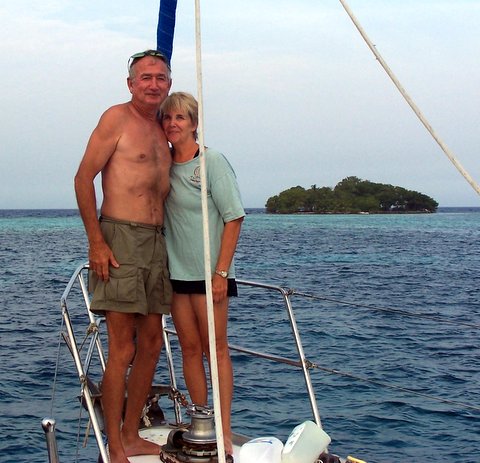