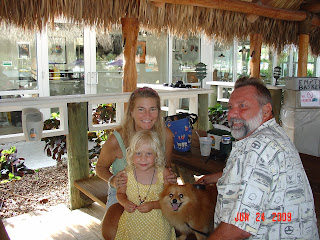 We left Clearwater two days ago in 20 knot winds. Although that is very manageable wind, the Clearwater pass is narrow making for a rough ride through the jetties with boats behind us turning back. The sail down to Tampa Bay was fast and we anchored at a small barrier island and rode out more wind through the night. Tuesday was calm so we took the Intercoastal Waterway from Tampa Bay to Sarasota Bay. Instead of open water, we had miles of beautiful homes and long stretches of mangroves on both sides of the boat. We had checked the charts for bridges and knew that we had two bascule bridges and one fixed bridge to negotiate before our destination. Bascule bridges are the type that open skyward. Both of the Bascules we came to were on a set schedule so we had a little wait each time. The final bridge of the day was the Ringling Causeway bridge in Sarasota. We had measured the mast back in Pensacola to make sure we knew our own height which stands at about 63 foot. The Ringling Causeway is a 65 foot bridge. Theoretically we good to go under a 65 foot bridge. However, it never looks that way as you approach a bridge. I was at the helm during the pass so my vision was blocked by the bimini. Randall, with binoculars, mutters, “I just can’t look” as we approach and Michelle is saying, “I’m not sure we’re going to make it.” I begin to feel the shadow of the bridge and brace myself for the scraping, jolting and hellish commotion which I imagine greets idiots who hit bridges. However, we appear to be passing through. As we are about to pass out from under the bridge, Randall starts yelling, “Left. Left. Left.” I turn the boat left as Randall watches our mast come inches from a large chain hanging from the bridge’s lights. We made it to our anchorage without doing damage to the Ringling Causeway. We spent yesterday enjoying the nearby park and Tiki bar and grill. Lily made friends with a little Pomeranian named Pompi. Pompi was on the town with Kat and Jack from Venice Beach which is our destination today. They gave us some info on where to go in Venice and mentioned that Venice is the place to beach comb for shark’s teeth. They even encouraged us to anchor by the restaurant Sharky’s and swim to the beach to look for teeth in the shallows there. “Perfectly safe,” they said. We are trying to figure out if this is a little trick the locals play on tourists. The advice must be good though because they took up with Lily so much that, by the time we left, she was wearing a shark’s tooth necklace, compliments of Jack and Kat, in case she doesn’t find a tooth at Sharky’s beach. 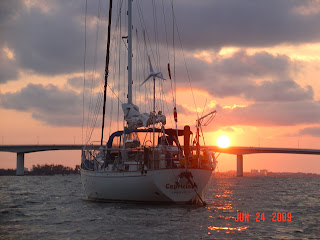 4 Responses to Clearwater to Sarasota Bay