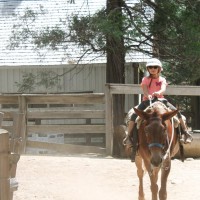 Near Redding, we stopped at a California Visitors’ Center and picked up literature on Yosemite. I dutifully read the 75-page magazine which covered the highlights and even broke thinks up into the perfect 1-, 3- or 5-day Yosemite vacation. Yes, Yosemite is best tackled with a general plan in mind. Despite this last minute attempt at research, we entered on a Saturday with no plan and a willingness to take whatever trail had an empty parking spot. We headed right into Yosemite Valley with the herd of cars, truck and RVs, many loaded down with dogs, bicycles and lawn chairs. We slowed down to a halt in the Valley and kept thinking, “Hm, what is the hold-up up ahead??” Well, the hold up in Yosemite on a summer Saturday is traffic, traffic, traffic. Wow. So many people, so little parking. 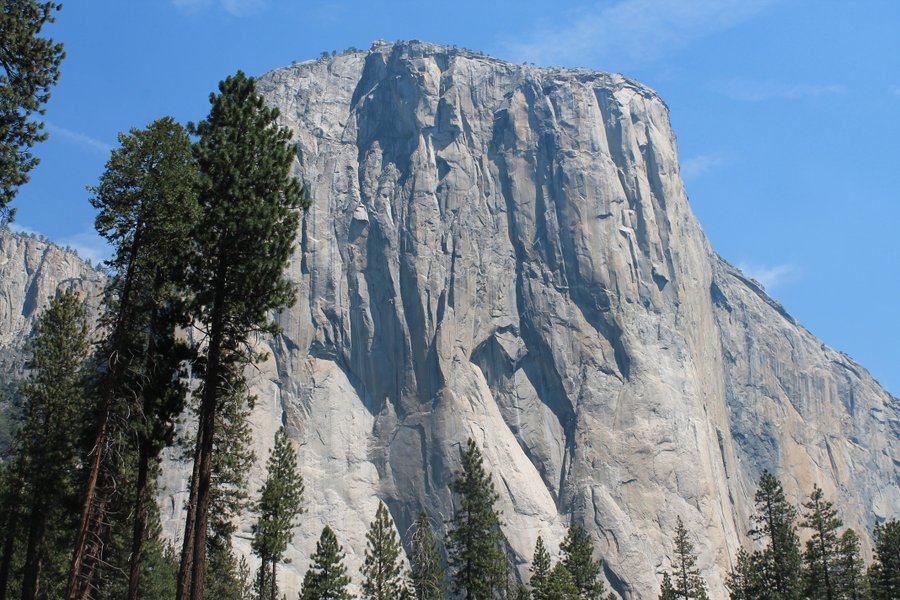 The wall of granite better known as EL CAPITAN! 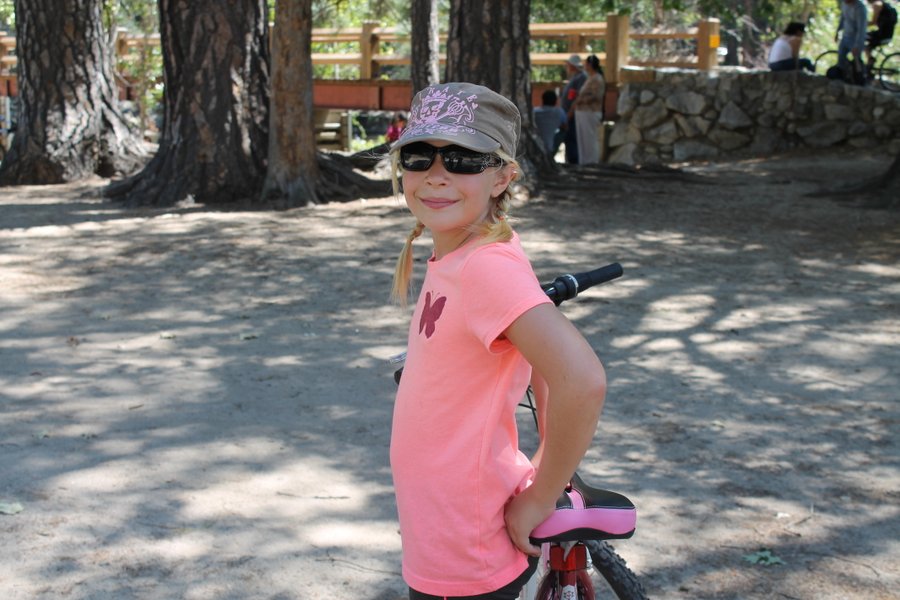 Biking break in the shade by the Merced Swing Bridge.

Thankfully, we were able to pull over and get a look at El Capitan going in. I was really excited to see this holy grail of rock climbing. It stands over the Valley’s western meadow so you see it first among the Valley’s towering peaks. Plus, the Merced River meanders the length of the Valley and gives you a nice place to play and cool off from the long wait in traffic. You can sit down on the river rock and gaze up at El Cap picturing yourself hanging there on the cliff face, unable to reach the next handhold. Wow. 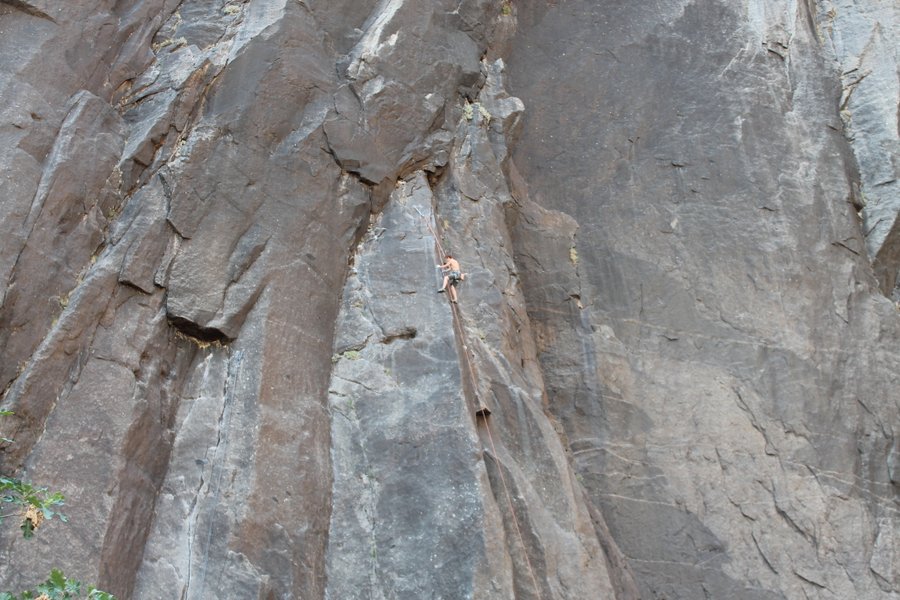 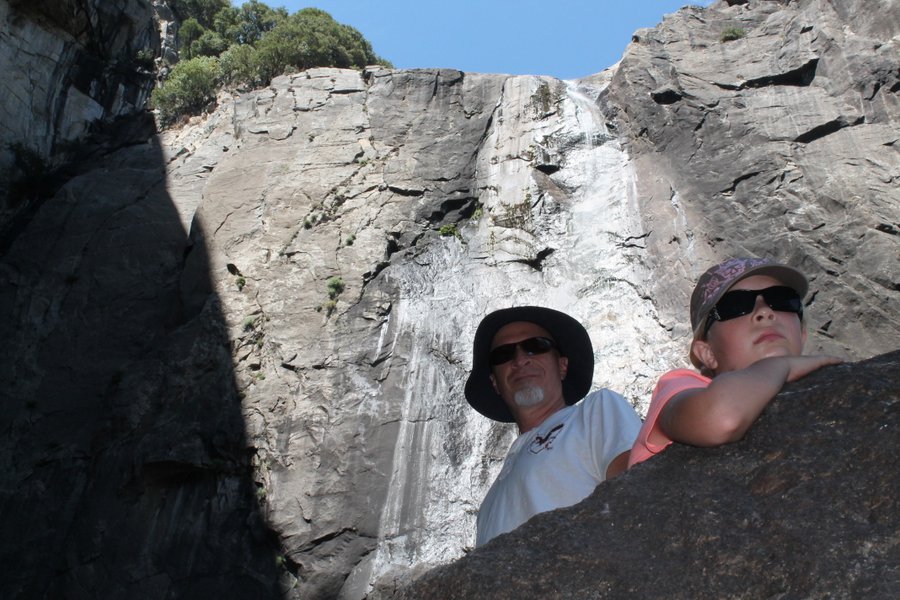 Randall and Lily at the late summer efforts of Yosemite Falls. 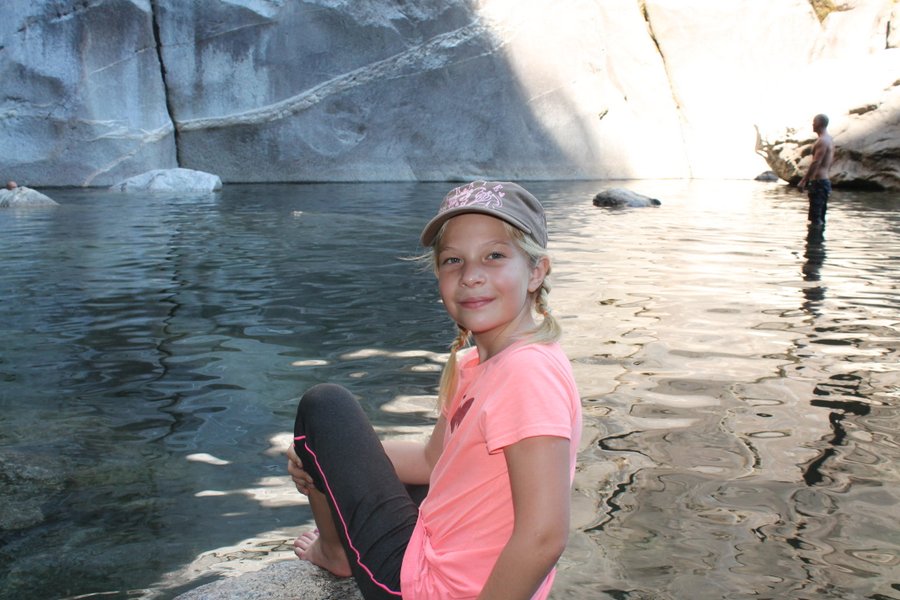 Once we got on into the Valley’s heart, we unloaded the bikes and pedaled around to get oriented. We came upon the Yosemite Falls trailhead and were, by then, ready to cool off again. We made the short hike to where the falls form a pool on the bottom of the Valley’s south wall. The falls are barely running this time of the year. However, the freezing cold pool was just right for wading and watching people take the full body plunge. Also, Lily really enjoyed spelunking a tiny cave on the Yosemite Falls trail. I suggested spending the night there as we had already passed seen “Campground Full” signs everywhere. We had been going back and forth on driving out for the night or trying to keep a parking spot all night. A cave seemed an interesting compromise but, of course, we don’t have sleeping bags or, more importantly, the much encouraged bear canister for food storage. 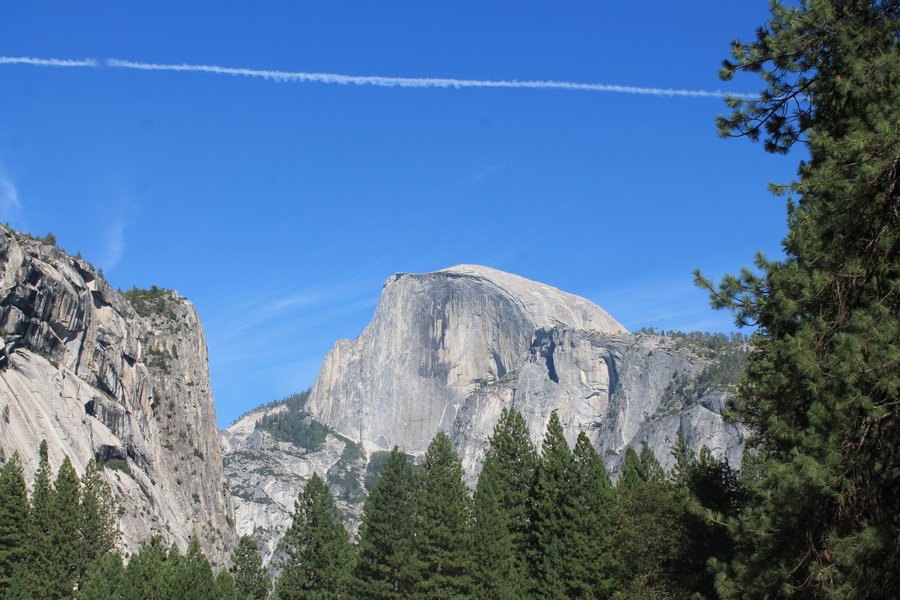 Half Dome with a contrail overhead. 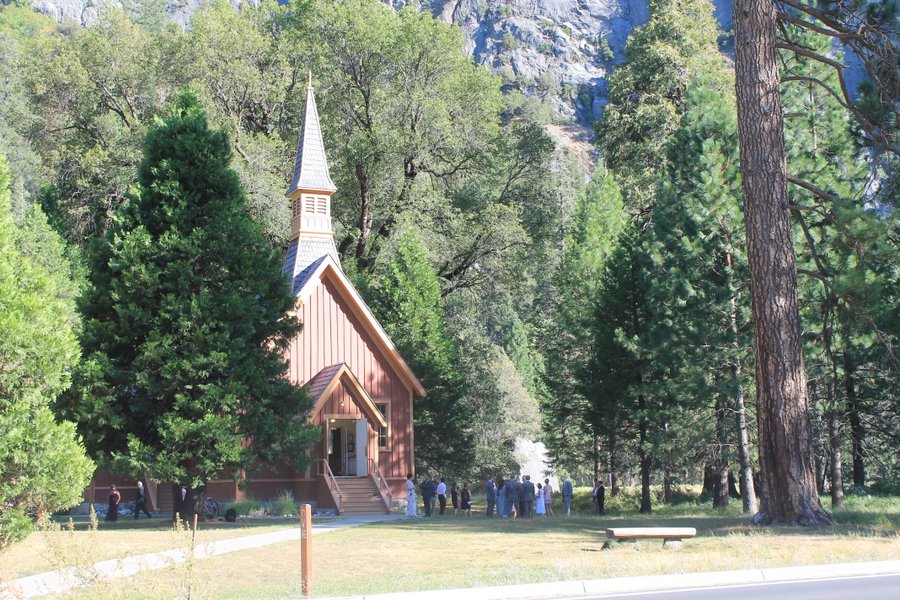 I guess Yosemite is a destination wedding spot. What would Yosemite Sam think?

We biked the rest of the way through the valley and played at one more Merced swimming hole. We talked to a Park volunteer about overnight parking rules. She explained that we could park for the night as long as the vehicle did not have any food inside. She directed me to the film which constantly plays at the Visitor’s Center of bears clawing their way through locked up vehicles to get at Doritoes and Twinkies. She said sleeping in your vehicle all night, especially with food, is against park rules but is not really policed. We studied the map for a likely parking spot and decided to head to Badger Ski Area and see if we could park unnoticed for the night. We got there and had the huge empty parking lot to ourselves. We went to bed and listened for bears. All we heard was a yappy dog concerned about encroachment on his ski slope territory. When we left the following morning, there was one other car in the lot who appeared to be braving the threat of bear attack and ranger ire. 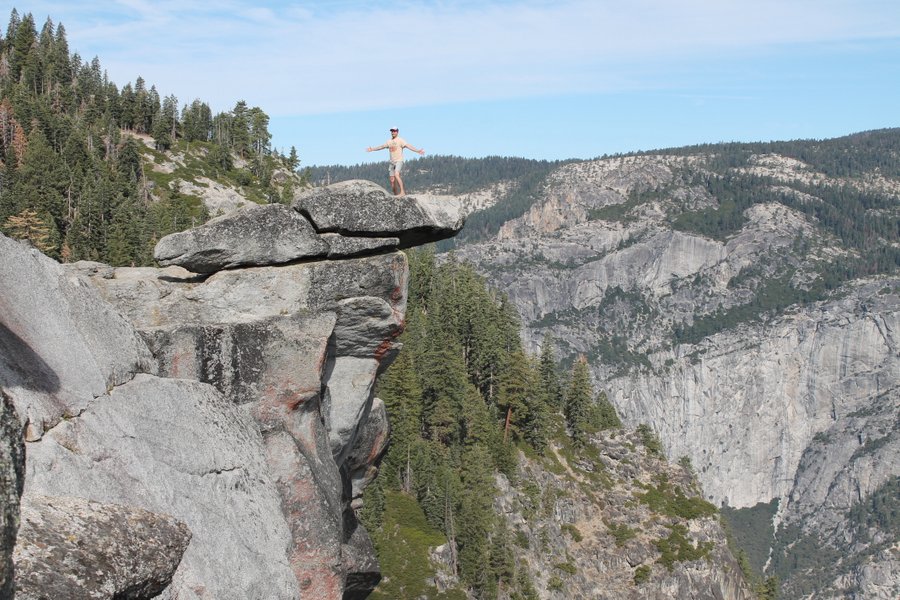 There are always Bad Photography Ideas unrolling around us. 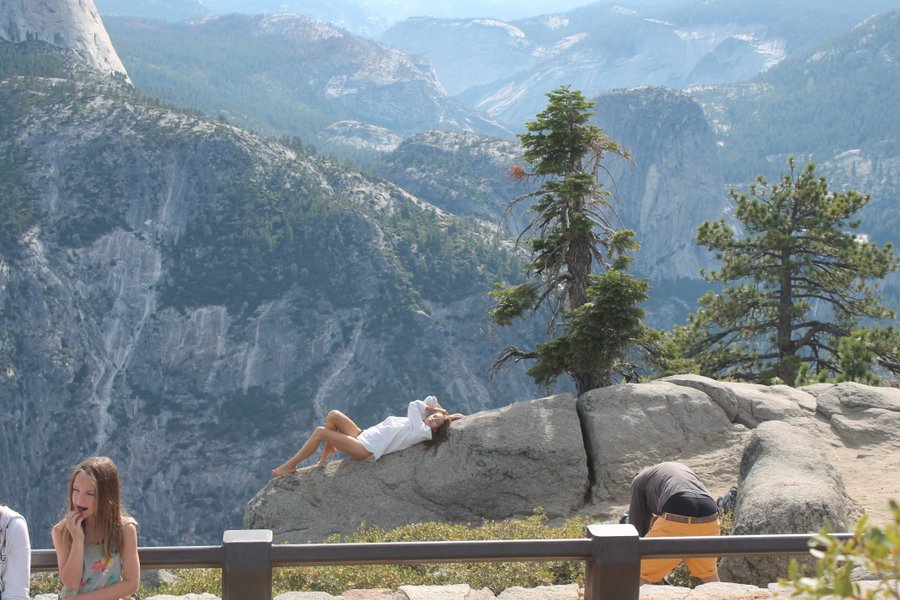 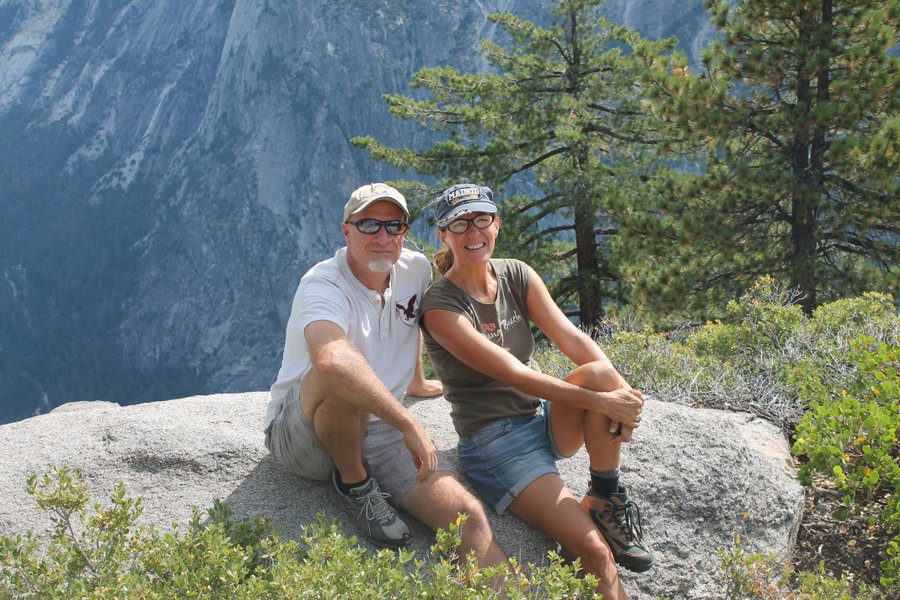 Ok this seems a little to tame a pose but Lily was running around getting us from several angles so we sat still.

We spent the morning at Glacier Point which looks down on the Valley at the Merced and also has great views of Half Dome, Basket Dome and North Dome. There was a telescope trained on Half Dome so we could get a look at some of the hikers who had made their way to the Half Dome Summit. We would have liked to hit a trailhead from this point down into the valley, but we had been promising Lily we would look into the horse riding in the park so we headed from there to the Wanona Stables.

The sign at the stables advertised Horse/Mule rides so Lily’s first question at the stables was could she get a horse to ride? Ms Bonnie explained that we would be assigned a horse or mule right before the ride. We could see from looking at the saddled-up stock hanging out in the arena that odds were heavily in favor of a mule ride. However, Bonnie also went over mule attributes for us – mules are much more sure-footed on the trail than horses, she said, and mules are more loving and friendly with people. We signed up and submitted to fate. I was called up to ride Clementine which looked to be the smallest mule of the bunch. Lily got placed on Braxton, a darker and slightly bigger mule. Randall took a few pics of us as we headed out on a two-hour ride of the meadow which used to be the sight of one of the Valley’s many Indian villages. Amanda, our guide, had grown up in the Valley and told some great stories featuring local bears and rattlesnakes. During one of Amanda’s storytelling stops, her horse Simon dropped a load on the trail. She advised me to give Clementine a vigorous kick past the pile because Clem had a bad habit of poop eating. Sure enough, Clementine dipped her head in that direction determined for a little taste. It took several kicks to get her past this treat.

Amanda also said the park was in the process of downsizing their horse and mule herd. Next year, short rides would only be available at one of the two stables and the Valley stables will only offer longer, multi-day rides. Due to the downsizing, we could be the proud owner of Braxton for $100. She didn’t mention Clem’s price – maybe poop eaters are a little harder to market. At any rate, Lily would have happily paid for and even ridden Braxton back to Oklahoma or at least to outside the park to arrange cross country passage. I intervened with a polite decline. We hope Braxton gets an awesome California Ranch to retire to. 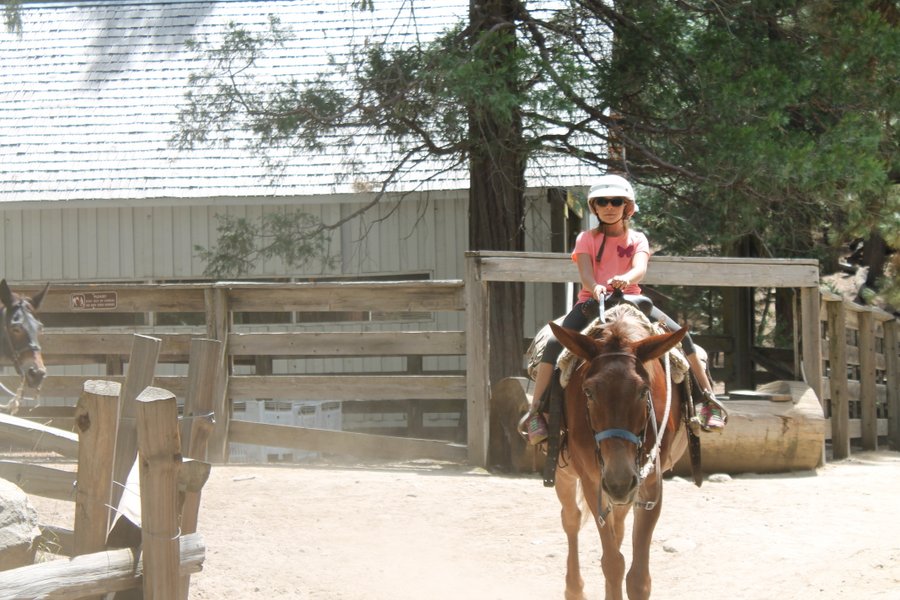 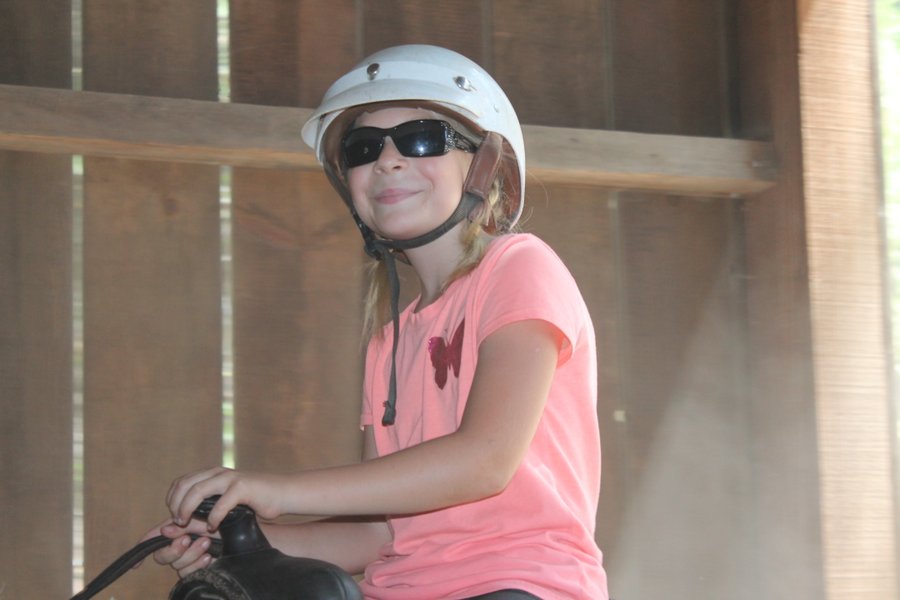 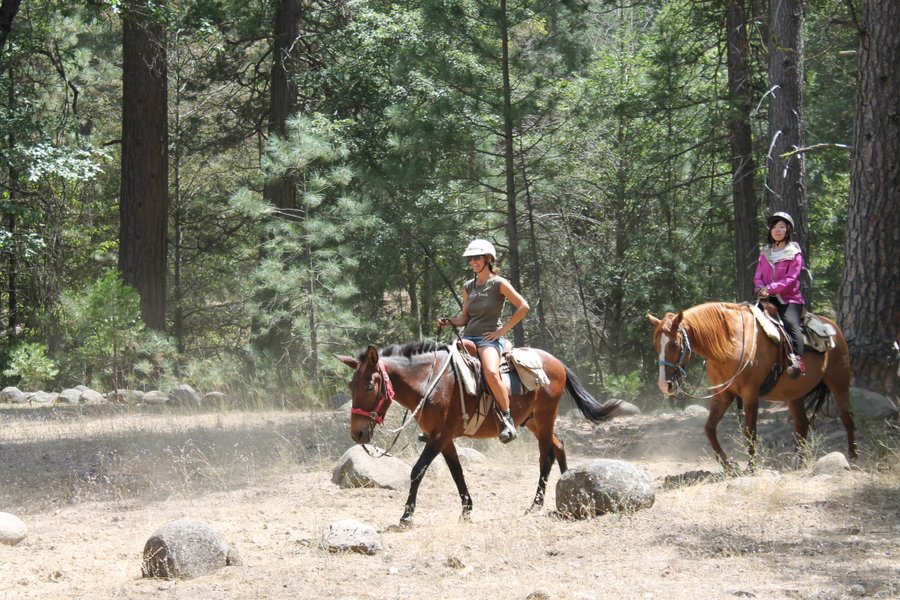 My Darling Clementine who has dietary issues. 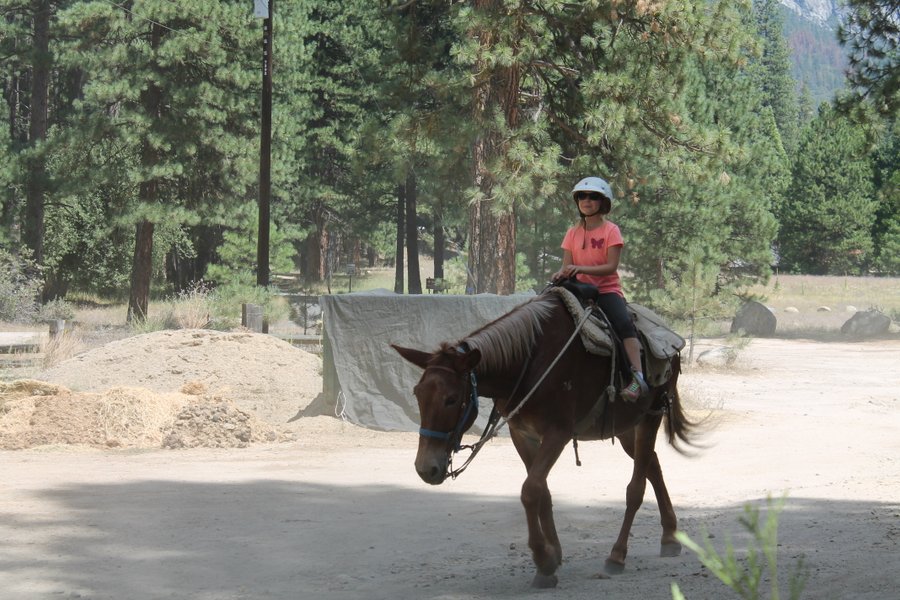 Lily headed back to the stables.

One Response to Yosemite National Park