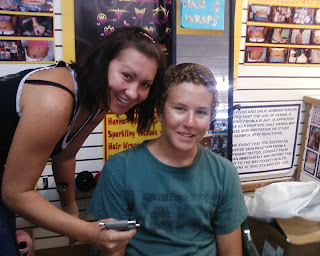 Well, I have a number of transgressions to report.

1. Jacob got his ear pierced. Who told him that real sailors sport an earring? Michelle? Vicki?
2. Many of you will forgive the earring as “youthful spontaneity.” However, I must also report that I checked his journal and NOT A WORD. You may want to comment back on this as I know many of you have mentioned the importance of recording a few memories. I think the advice to use vivid verbs and awesome adjectives was just too much. Maybe as a starting point, he should write the date, weather conditions and whether his ear is red and oozey or OK. I think he could stay on top of that.
3. Lily has been to a bar. I was doing laundry at the marina which has an outdoor bar right in the dead center of the marina. Eric was giving a live perfomance, apparently a sort of audition to play there regularly, and he was working hard, calling to casual bystanders to come in and join the fun. He was covering all the best sing along songs. I come out of the laundry and he has reeled in both Michelle and Lily and two other little girls gawking from the perimeter. He is leading everyone to the tune of Jesus Loves Me and, for just a moment, it seemed like every little thing was going to be alright and brotherhood would reign on earth. The little girls were all smiles. We stayed for several more songs so Lily could get a little dancing in too.
Many of you were worried about the possibility that the year long Fuchs cruise would lead the innocent astray. This was just a slight detour in our efforts to seek wholesome, family-oriented entertainment devoid of tv and video games, piercings and barhopping.