We made the Tampa Bay to Kemah trip in about three weeks. Here is the quick run down:

Tampa to Pensacola – Made terrible time getting out of Tampa Bay with the tide and wind working against us. First night out, our heading was almost entirely in to the wind and the autopilot seemed unable to hold the course. Nearing dawn, the steering cables jammed up and we lost steering. Randall had to take the cables completely off the rudder post and realign them better on their tracks. Back on course, we again tried to get the autopilot set but it was, at this point, making suspicious noises with every adjustment. Randall unscrewed it from the helm and tried to pry the back off from the front to expose the belt which was the most likely source of failure. When the two interlocking pieces came apart, about 15 ball bearings came flying out. “That didn’t happen last time,” said Randall. Nice… With the autopilot apart, we could see that the belt was not the only problem; the plastic spacer holding the ball bearings in position was also broken. Randall glued up the plastic part, replaced the belt and carefully placed 15 ball bearing in the each one’s designated spot all while sitting in the cockpit of a rocking boat. The auto pilot worked intermittently from that point on. So, as has happened before, we updated our destination in the logbook to read, “Pensacola,” and adjusted the heading. Aah, Pensacola, how handy a stopping point you always seem to be. 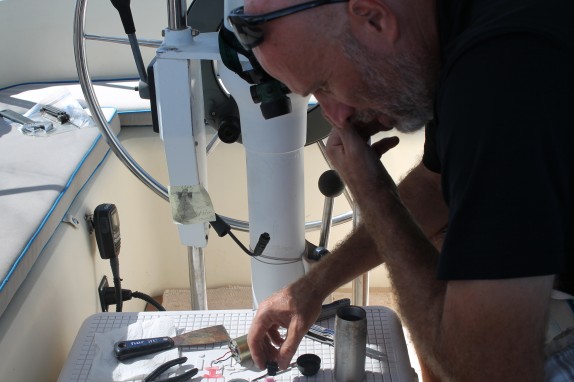 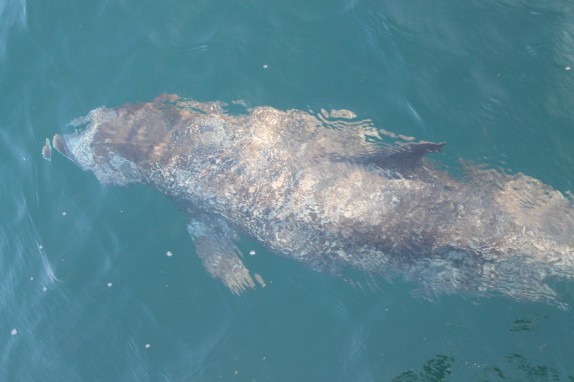 Spotted dolphin. One of many that came to check us out. 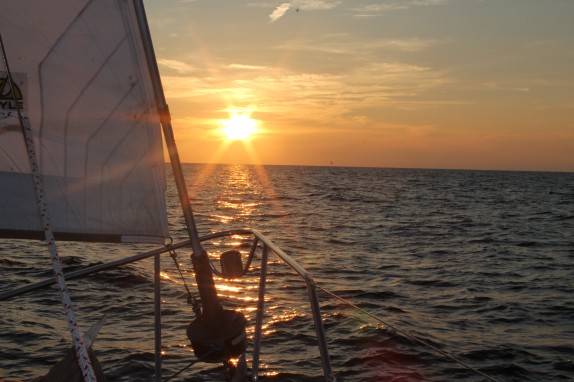 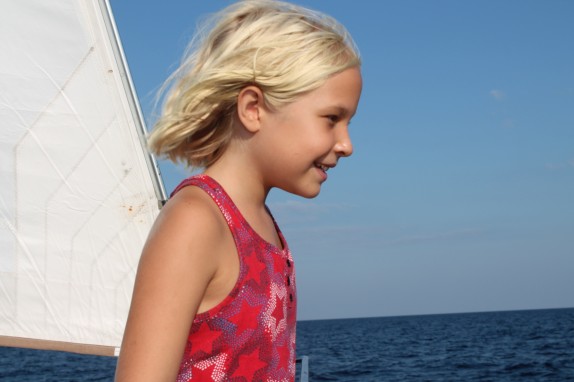 Pensacola To Gulf Shores, AL – We anchored two nights in Big Lagoon near the Pensacola cut. Very quiet and pretty anchorage which we had been to before. I dove down to scrap the prop (First time for me! went well) while we were there while Randall once again tried to fix the auto pilot. We decided from there to stay in the Intercoastal Waterway to Gulf Shores, AL where we could pull into a marina and order the autopilot part we needed. This part of the ICW is very pretty and easy to navigate. We pulled in at The Wharf in Gulf Shores. We ended up staying five days there waiting on the part so we had plenty of time for a few beers at Bimini Bob’s and strolling through the small, mall-like shopping area. We rented a car the last day to visit the beach, grab groceries and eat in town. 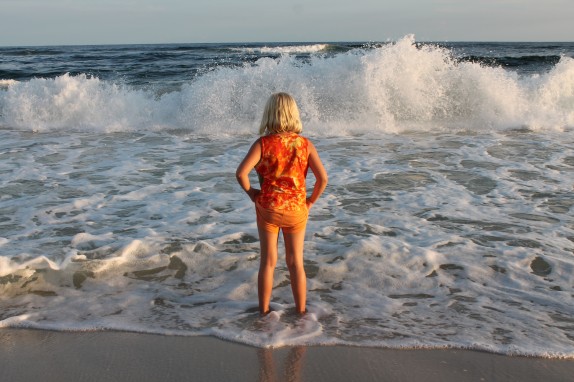 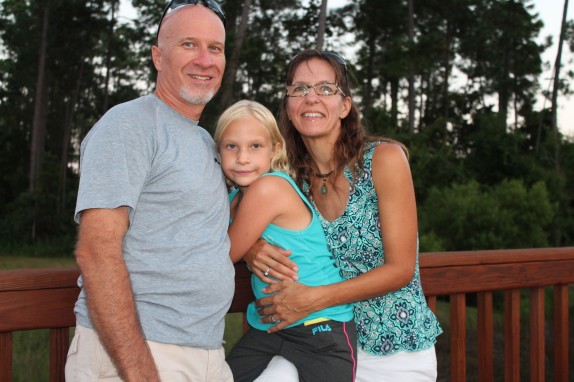 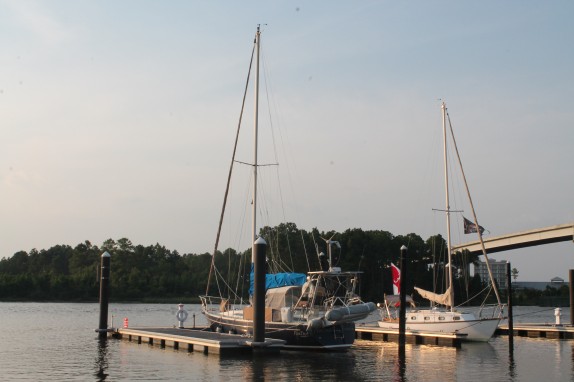 Anchored at The Wharf on the ICW. No roll tide rocking this boat.

Gulf Shores to Venice, LA – This was a short hop – two days, one night. It would have been so easy but for the boat traffic in this area. We made pretty slow time through the night, sailing just inside the safety fairway to our waypoint. About 4 am, we came to a tanker anchorage which we had to pick our way through in order to get on our heading for the cut into Venice, LA. We were watching two moving tankers navigate the area while, at the same time, trying to make sense of all the other anchored boats within the anchorage. Finally, we got past the confusing mess of lights in the anchorage and turned into the narrow Baptiste Collette cut. Several barges were coming out as we made our way in watching the depth sounder all the way. The VHF radio was filled with constant chatter. We listened for any word of traffic issues coming our way in the cut. I grew increasing anxious listening to captains announcing their positions on the Mississippi River. Our last feat of the day would be crossing the Mississippi River for the Venice cut where the Venice Marina was located. I pictured us sitting in the cut, waiting to time our crossing just right between the constant barge traffic. Randall, too, had speculated that the current might really pick up when we hit the Mississippi making such barge dodging even more fun. When we got there, there was only one boat in sight and it was anchored. We motored across with only a few duck hunting boats buzzing around. 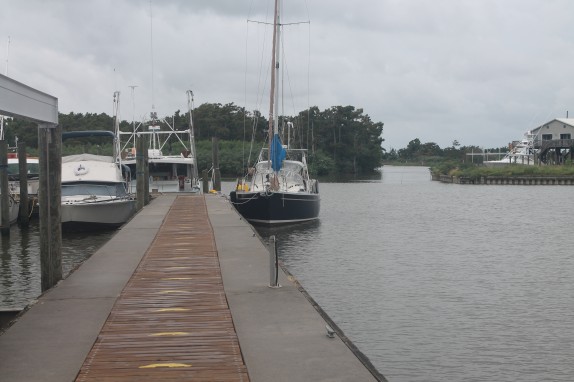 In Venice, LA. Sailboats are an uncommon sight in this town. No groceries within walking distance either.

Venice to Kemah, TX – We waited out weather in Venice for a week. Tons of rain fell leaving only short little pockets of time to walk around and explore. There was nothing to see anyway except classy multi-million dollar fishing boats, rusty commercial fishing boats and every type of fishing boat in between. It was the tail end of the mackerel season and, because of the bad weather, most of them were already tied up and abandoned until the next season. We finally got a break in the weather. With groceries running low and not store in sight, we decided to get going again. We had two options for getting back in the Gulf – the Southwest Pass of the Mississippi River or Tiger Pass. Tiger Pass was a short cut but the recent NOAA charts indicated shoaling areas with only four feet of depth. We had been asking local captains if Tiger Pass was really that shallow since it was dredged only last year and was heavily used according to the VHS traffic we had been monitoring. They all said we would be “probably OK.” We opted for Tiger Pass and didn’t see any depths under ten feet. 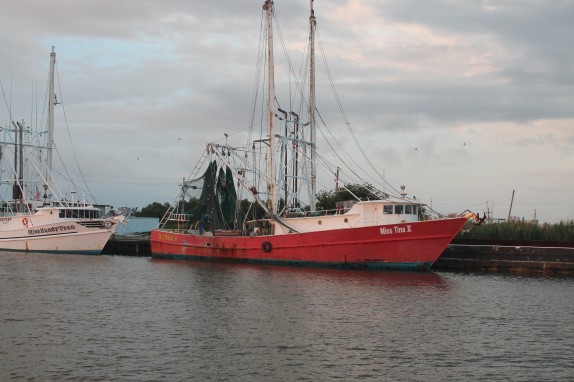 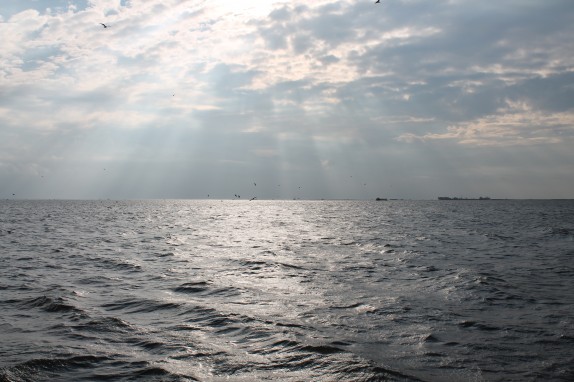 Sunlight broke through the clouds right as we made our way out Tiger Pass into the Gulf.

The last leg was the longest – three nights, four days. The first night out we were soaked by an all night thunderstorm. Not much wind but the rain was steady and hard. With zero visibility and more traffic, we stayed glued to the AIS looking out for other boats. Randall had to get on the radio several times to let other boats know our position. We also were treated with one extremely close bolt of lightening that lit up the rigging, paralyzing us in the sudden light. The thunder split the air and then echoed over and across the water behind us. Chilling! We were so happy to see the morning light peek out and the rain let up. We were both tired and ready to get out of the foulies and rest when we had a fellow traveler drop in for a rest. The little bird below looked like she was ready for some sunshine, too. 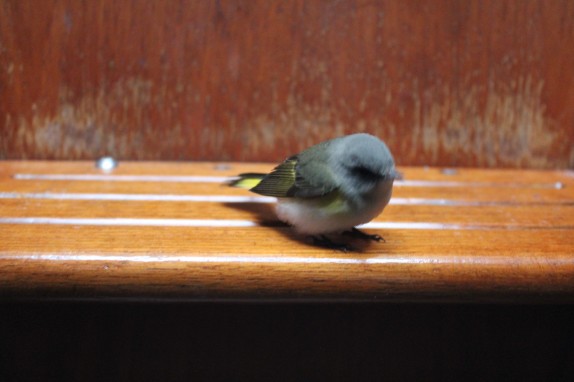 The rest of the sail was pretty easy. Randall reeled in a Spanish mackerel on the last day out. Lily and I showered each other with sea water until I lost the canvas bucket overboard. The last night, we picked our way through another crowded anchorage just before dawn. Finally, we were at the Galveston jetties. There is an crazy, happy pleasure in seeing familiar landmarks after so long navigating in unfamiliar waterways. Randall regaled me with stories of the night he pulled out in front of a tanker sailing Capricious home through the Galveston jetties on our our last cruise. But we keep our distance this time and pulled into our new slip at Watergate very tired, hungry and happy. 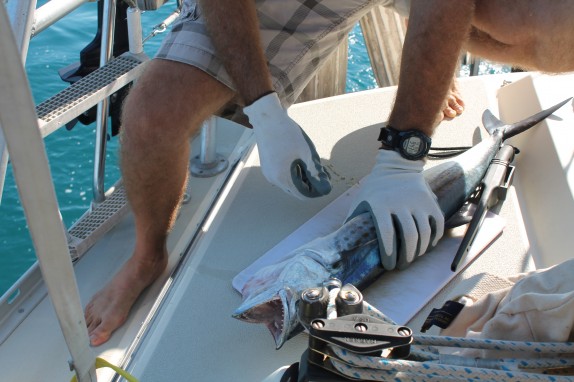 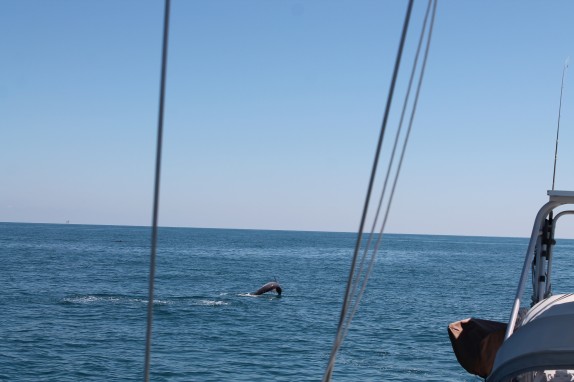 Dolphin flip! Woo Hoo! We love to watch them play. 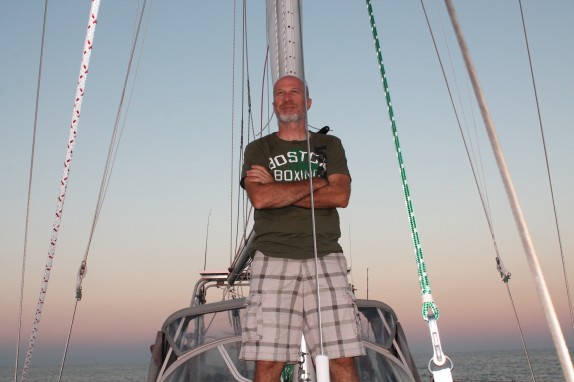 Check out the cute Captain. He looks like he is planning another trip. 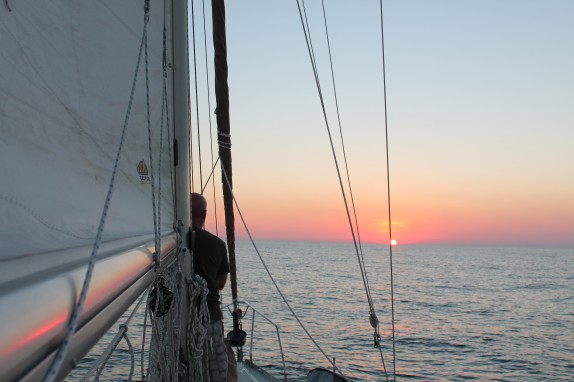 Back To Homeschool Countdown
Little Birdie By Lily