Lily could not wait to met Hazel at the Clearwater Marine Aquarium. I could not wait to meet Harry Connick Jr.  I had to explain to Lily on the way over that we were expecting a little too much.  The human characters from the movie “Dolphin Tale” wouldn’t be there but we could see the main character, Winter.  Dolphin Tale is a movie about two Florida kids, Hazel and Sawyer, who help rescue a dolphin, Winter. Partly a true story, Winter was found with a crab pot line wrapped around her tail. Only a few months old, she was brought to the Clearwater Maine Aquarium close to death. They were able to nurse her back to health but Winter lost her tail due to the damage done by the injury. This type of injury can be particularly life-threatening because it affect the way Winter swims and, over time, puts pressure on the spine. Clearwater Marine Aquarium sought the assistance of Hanger Prosthetics to design a prosthetic tale for Winter. After much trial and error, Hanger was able to design a prosthetic tale which helps Winter to swim correctly. She does not wear the prosthetic tail all the time but puts it on several times a day for some critical swim therapy.

The movie highlights the special kinship which forms between Winter and her unique fan base of handicapped kids. In the movie, a young wheelchair-bound visitor to Clearwater Marine Aquarium energizes the aquarium to not give up on Winter. It was exciting to get to see Winter in person and hear that she is the only dolphin in the world to survive this type of injury. It was also fun to see kids, including numerous kids with disabilities, so excited about Winter’s ability to adapt to her limitation and the team of dedicated rescuers who stuck with the challenge.

Lily got to see Winter and Panama, the two dolphins from the movie. She spent 30 minutes at the stingray tank, excited each time a ray made a pass within touching distance. We also went over to Pier 60 for the nightly sunset party. We picked up our new rigging while in Clearwater so we plan to see Tampa Bay a little closer today. 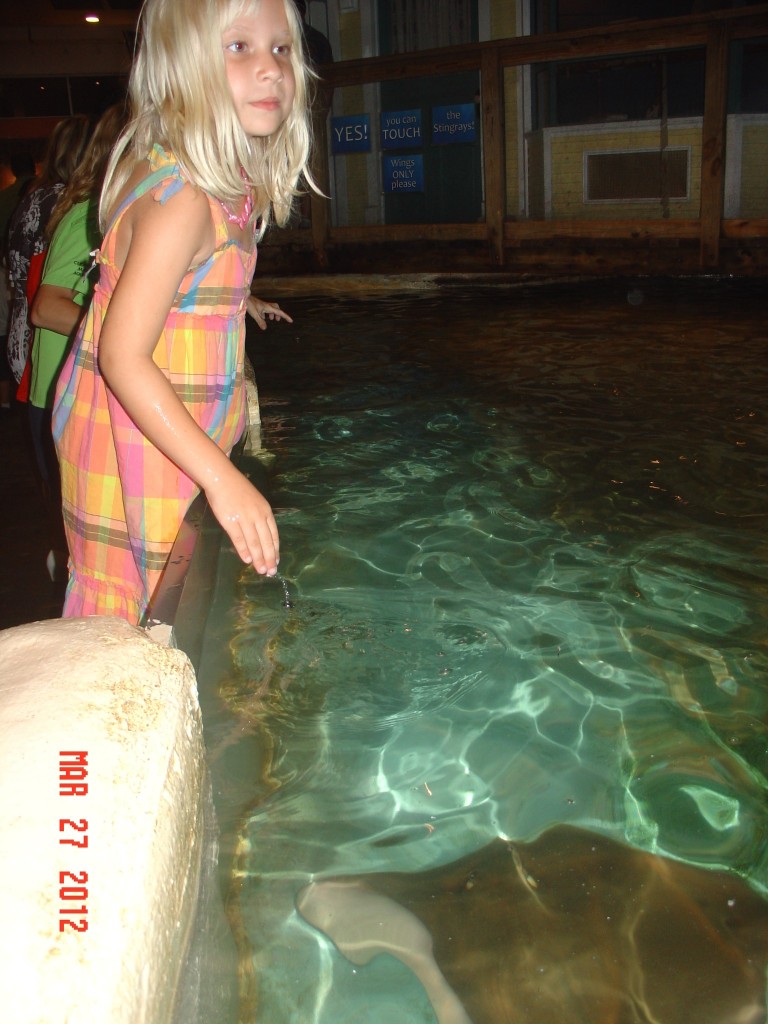 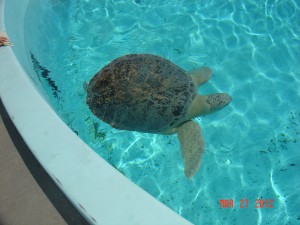 A Green Sea Turtle who survived a boat strike