It was rather impulsive but last month we bought a new boat. It started with a sort of sketchy uncertain plan for all four of us Fuchses to sail somewhere together. Jake is sort of missing boat life. We miss Jake. It seems like a good thing. The only problem was our Moody’s lack of space for the fourth crew.

Randall happened on a listing for a Prout Snowgoose 37 and we all sort of got excited by the idea of living on a catamaran. Cruising families seem to gravitate to the spread-out living space and the stability at sea that two hulls can provide.

We went down to take a look. The boat was well set up for cruising with updated electronics, a watermaker, solar and wind power and, of course, had the right number of berths. It is older so it could use a little updating here and there but we can do that as we go. We closed on the boat on Dec. 5 and set a timetable for getting back in time for the drive up to Oklahoma for Christmas.

We spent a few days in Rockport going over the boat with the seller who took lots of time walking us through the systems and gadgets. That weekend was Rockport’s Annual Tropical Christmas celebration. A cold front blew in driving the temps down in the 30’s. Santa and a few elves made it but most of the vendors and entertainers were no-shows. Lily did have a great time making ornaments at the town’s art center and gathered lots of parade candy for the trip home. The cold front passed and we left on Dec. 11. The temps hung around the mid 40s to mid 50s most of the trip and, since the winds were a little contrary, we motored the ditch the whole way. 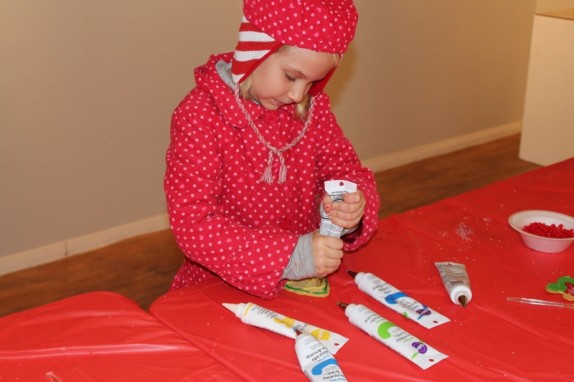 We anchored the first night on the north end of Matagorda Bay in choppy water off Palacios point. We got an early start the next morning in order to make it to the next anchorage just short of the Colorado River locks. We passed tons of barges along with way and the cat’s shallow draft (just under 3 feet) is great for maneuvering the ICW. We already love the boat’s roomy cockpit. It is nice to not have to step over Lily and her stuff to get to the hatch or to reach the sheets. Of course, Lily stayed below most of the trip while we bundled up for shifts at the helm. She read most of the day snuggled up on the settee but ran out for occasional bouts of dancing and cockpit gymnastics. Still, when it is warm she is always in the cockpit and the catamaran cockpit will seat us all without it looking like family twister night. 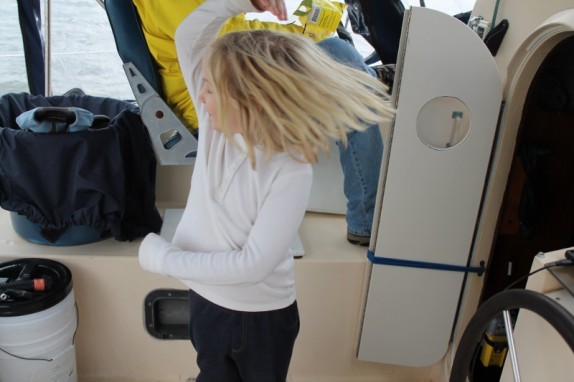 We planned to anchor in Offatt’s Bayou the final night. After a few unsuccessful tries at setting the anchor in Offatt’s notoriously slick muddy bottom, we finally tied up at an abandoned dock. The dock appeared to be a public fishing dock probably condemned after Hurricane Ike. There was a chain link fence separating it from the nearby parking lot and, to further discourage use, the walkway boards had been pulled leaving only the pilings, the dock framing and lots of loose rusty nails. The charts indicated enough depth around the dock and another sailboat was tied up there. We tied up behind him and looked a little wistfully at the land beyond the fence. Sure, we could swing down the pilings, tiptoe along the rotting two by fours, scale the fence and maybe go eat somewhere. And then do it again an hour later in the dark. It could be done. But we could also go below and warm up canned soup. Canned soup won. The sailboat owner showed up at four, scaled the fence to get back to his boat and started fishing. Getting breakfast the old fashioned way, I guess.

We motored out through the pretty dawn rays. However, an hour later, fog had totally obscured the sun, the surroundings and we slowly poked our way through the eerie grey. By the time we were in the Houston ship channel, it was thick fog with visibility only a few hundred feet. We crossed the channel to motor up well out of the way of the tanker traffic. Randall went up to the bow, fog horn in hand, to keep watch for uncharted pilings and smaller vessels. I watched the charts and AIS from the cockpit, waiting all the while for the foghorn to blast while Randall waved me frantically away from impending doom. It lasted a whole fun filled hour. When the fog broke up, the sun shattered the horizon into millions of sparkling diamonds. Lily took a million different pictures. Thank God for clear skies and digital cameras!

By the time we got to Watergate, the north wind was blowing hard. Several boats were jockeying around the marina, getting ready for the evening Christmas light parade. Everyone was out on the dock to watch us try to pull in this new boat which, in comparison to our other boats, seems a little like driving a mini-football field. However, Randall pulled straight in, perfect speed and I triumphantly wrapped the cleat like I was on top of a struggling calf. When I threw my hands up, nobody clapped. Don’t they know a good rodeo when they see one?

We spent my birthday, Dec 15, sleeping in, showering long and planning all the stuff we have to do to leave for a trip. We ended the day at Las Brisas making plans for eating tacos somewhere in Mexico soon. That’s the plan for now anyway.

Here are a few trip pics. Boat pics are coming on the “About Foxtrot” page once the boat has her correct name on the hull. 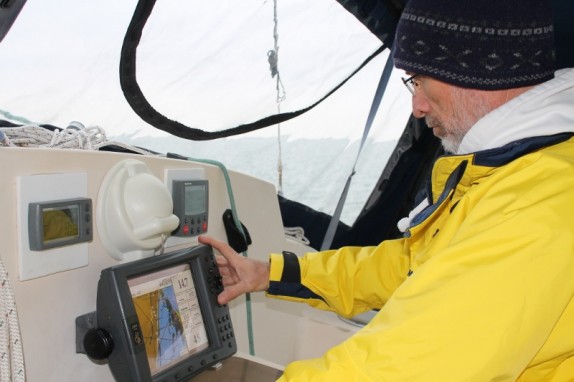 Randall taking a look at the chart. 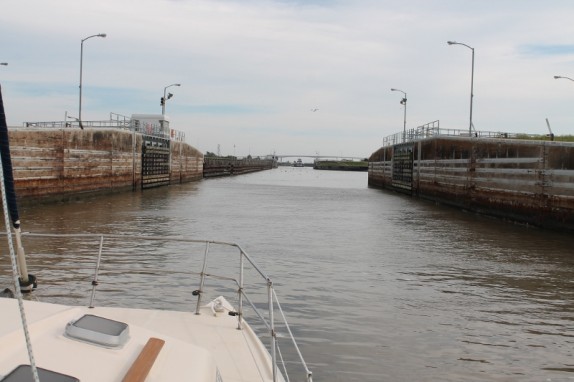 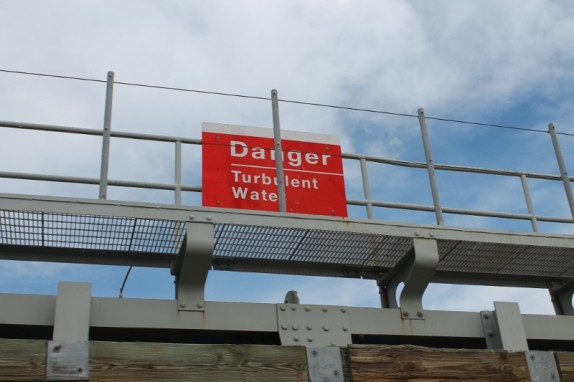 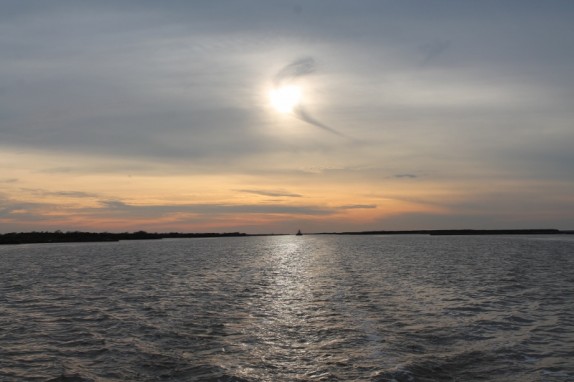 See the tiny barge coming in the distance? They look so small as they approach. 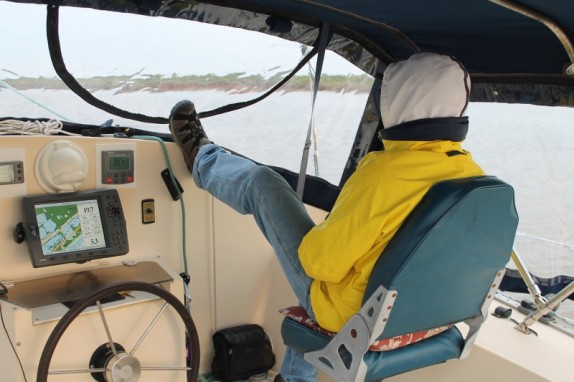 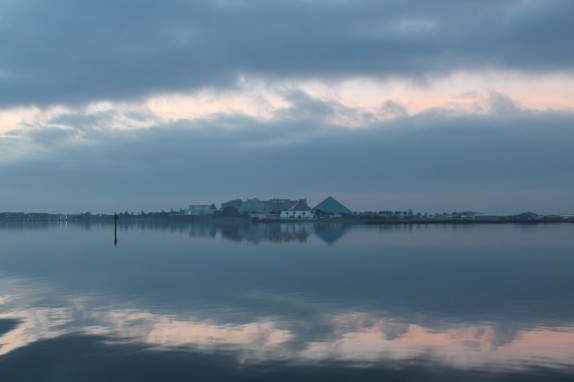 Moody Gardens in the distance. 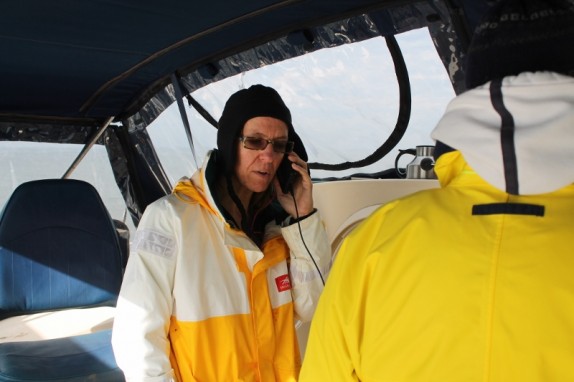 Hi Mom. No, we aren’t doing anything. Just sitting around doing nothing, like usual.