After an offshore crossing, I always feel like getting off the boat and kissing that nice, immobile, sturdy-feeling ground which gets so little appreciation on a daily basis. Viva La Mexico and its lovely, coral-fringed, kissable shore! They say that with the proper amount of tequila intake, the ground here does actually kiss back. Oh, ok, they don’t actually say that. We don’t have a clue what they say. They speak Spanish here of which we understand one word, Hola. It will be a long time before we go conversing with locals about love, tequila and other pursuits.

We made good time on the crossing. We left Marathon Monday afternoon after a mad morning of provisioning and getting Lily to say goodbye to Peyton. Lily was for staying in Marathon forever or at least for ONE MORE DAY, PLEEEEEASE. She and her new Marathon friends had more to do in the Mangrove City. We got underway a little late but had a nice nighttime crossing past Key West and Marquesas Key. We arrived at the Dry Tortugas around 4 pm Tuesday.

Fort Jefferson is on Garden Key in The Dry Tortugas and is an incredible sight which no bricklayer should ever, ever miss. By the time we arrived, the ranger station was closed but we had about two hours of daylight to walk through on our own. It was built to defend US territorial claims in the area but never really lived up to that purpose. It was converted to a prison to house confederate soldiers during the Civil War. Its most famous prisoner was Samuel Mudd, an American physician imprisoned for aiding and conspiring with John Wilkes Booth in Lincoln’s assassination. Mudd knew Booth and set his broken leg after the assassination occurred. However, it is a little unclear if Mudd knew at the time of the medical treatment that Booth had murdered Lincoln. Mudd attempted to escape the island by stowing away on a supply ship. However, he was found, returned and lost his status as one of the Fort’s prison doctors. He was later reinstated to this position and widely lauded with helping the fort through the plague epidemic. 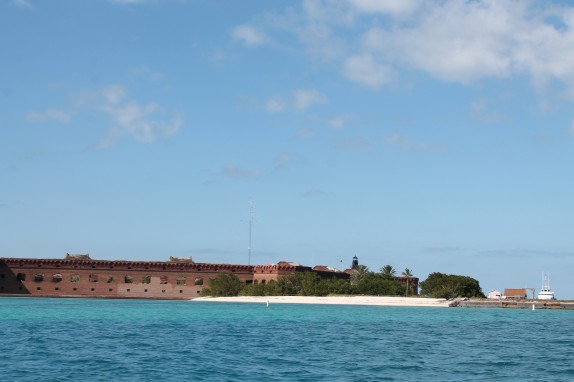 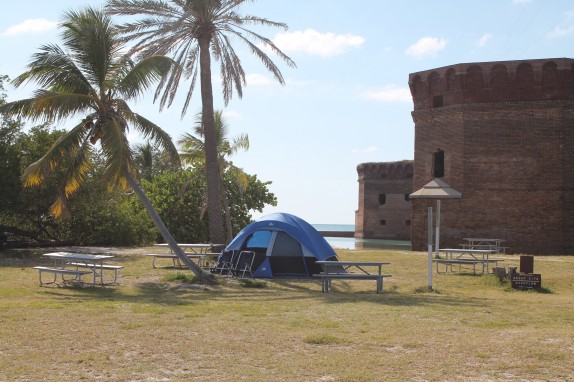 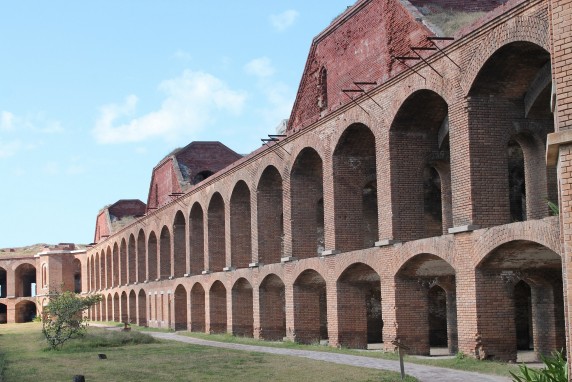 The number of bricks in the fort is staggering 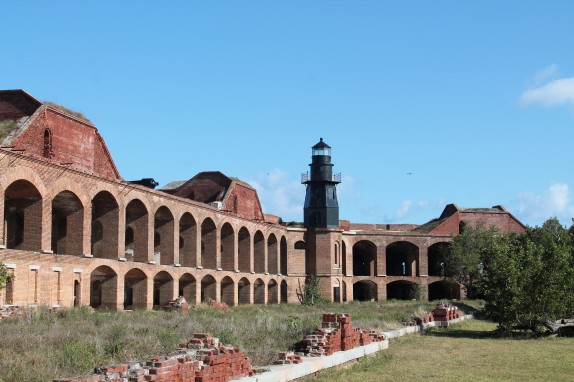 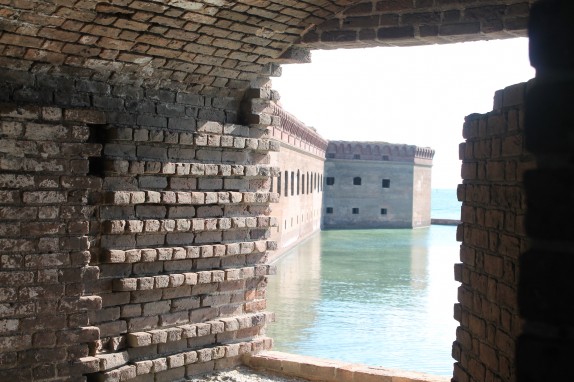 Looking out on the outer wall and surrounding moat 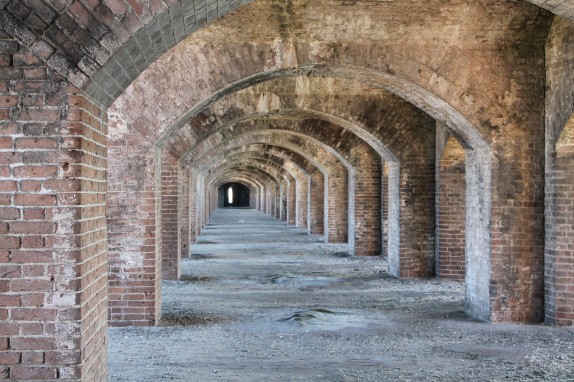 There are beautiful brick columns and arches everywhere. 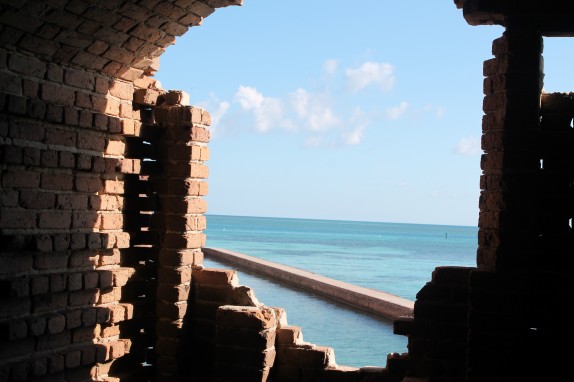 The fort has some internal steel supports which have rusted and cracked the brickwork. It is a pretty constant job keeping the place standing.

We left DT Wednesday and, as we motored away, Jake called up to us in the cockpit that the water would not come on. Randall unhooked a few lines hoping it was just a clog in the the system but no such luck. The water pump was broken. We continued on without pressurized water. We sailed on throughout the day making good progress. The wind dropped off at one point so we decided to start the engine. It would not fire up and Randall also got to tinker around testing the batteries. Our engine starting battery was fried.  We were able to start the engine by using our house batteries but, for the remainder of the trip, we had to monitor the batteries to make sure we did not discharge them past the point of getting the motor started.

The wind picked up for the rest of the trip. Both nights underway were pretty bumpy with 15 – 25 knots of wind on the beam. We had the whisker pole up the first night and the wind got up enough that Randall had to get out on deck in the dark and unrig the whisker. Because our jib is cut so high, the jib clew was almost out of reach. We will avoid leaving the whisker pole up at night in the future. Friday morning we started really looking at the charts to see if we would make Isla Mujeres before nightfall. It would all depend on just how strong the Yucatan current would fight against us. Also, the seas were pretty heavy making much of our progress up and down instead of forward. However, the wind was good and we started looking for land in the late afternoon. The Yucatan is so flat you have to be right up close to shore before you get to yell out “Land Ho” but a few grey lumps finally appeared with plenty of light left for us to pull into the Isla Mujeres Harbor.

As we were approaching the channel, another sailboat hailed Marina Paraiso. Getting no answer, he went on to explain that his engine wasn’t working and he needed a tow. Still no answer. He tried every other marina. He hailed the Port Captain. He hailed anyone at all listening on the island. Nothing. We hailed, too, just to see if this was the across-the-board response. We got silence, too. After an hour of hailing, we gave up and proceeded into the harbor and anchored, feeling sorry for the poor guy without an engine. He then radioed the marina that he was coming in, using his dinghy to motor the big boat in. We decided to dinghy up to the marina to see if we could pull in the next morning and get the check-in process started. So, going up to the marina, we run into the guy we had been hearing on the radio. Randall says, “Are you Hans? Hans who used to be in Watergate Marina??” Sure enough, it was one of our Norwegian dockmates from years ago in Clear Lake TX. He has been in Guatemala for several years but is now headed home. He is 76 years old and had a heart transplant a few years ago and he was still shaken from their engine less passage.  It took a minute for him to recall us but he suddenly said, “Yes, I remember you are the one always working, working, working on your boat!” So we had beer with an old friend on our first night at Isla! What a wonderfully small world some times. We got back to the boat that evening. Lily and Jake had stayed aboard and Lily stood on deck singing and boat watching. Two boats came by to ask if Lily wanted to join their kids for some playtime. We declined because we were all so tired but it was nice to know there were going to be plenty of playmates around.

We are staying at Marina Paraiso Club de Yates and Lily has made fast friends with two sweet girls here – Looli and Zephyr. Lily wants to have friends to share her birthday with that we have decided to celebrate tonight since Looli and Zephyr will be leaving early in the week. We tore her away from them to explore town. Isla is such a interesting little town. I can’t wait to describe it in detail but I have a hastily planned birthday party to shop for. More info and party pics tomorrow! 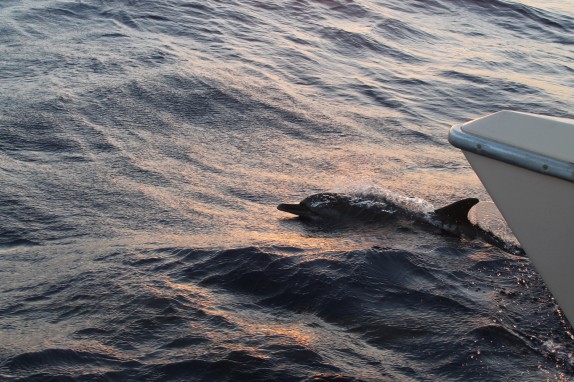 Dolphin jumping under the starboard bow. 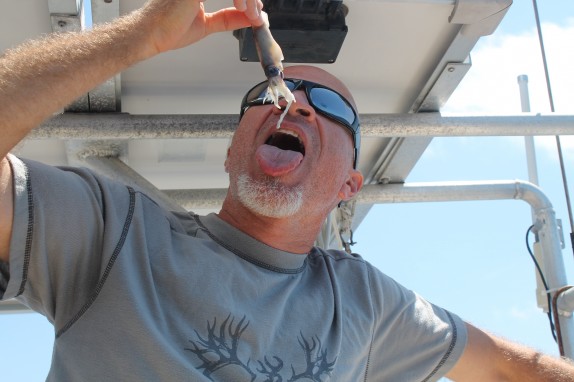 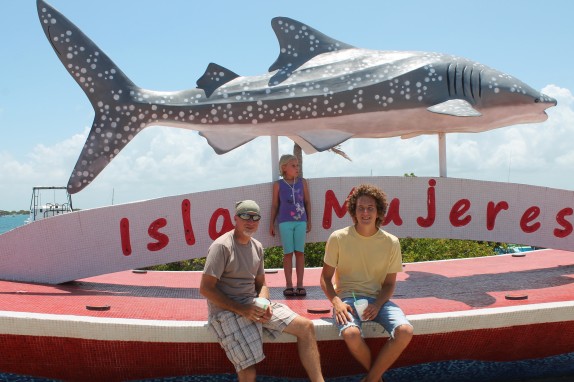 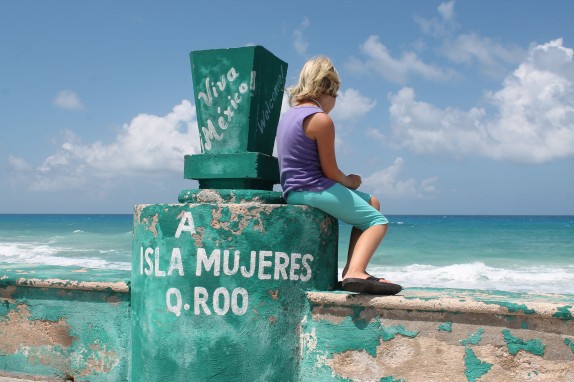 It looked so much smoother from shore. 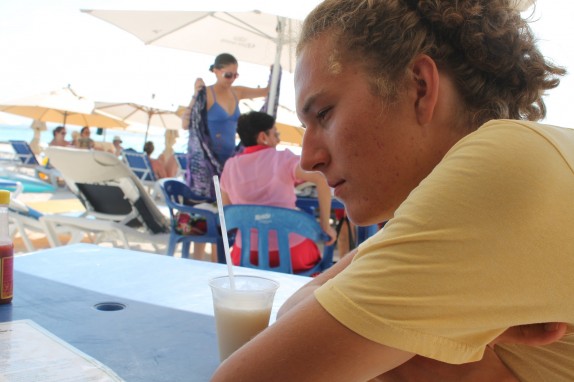 Pina Coladas on the beach 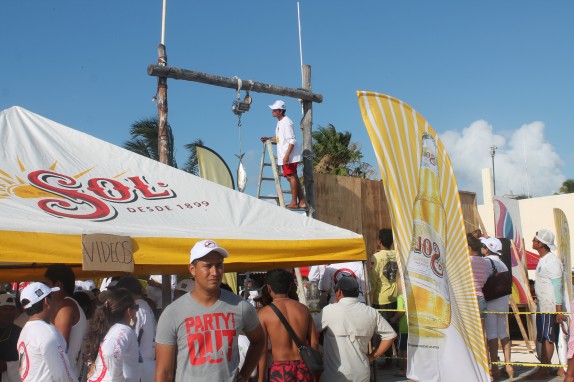 Fish weigh-in for the big weekend tournament. There were dead fish everywhere! 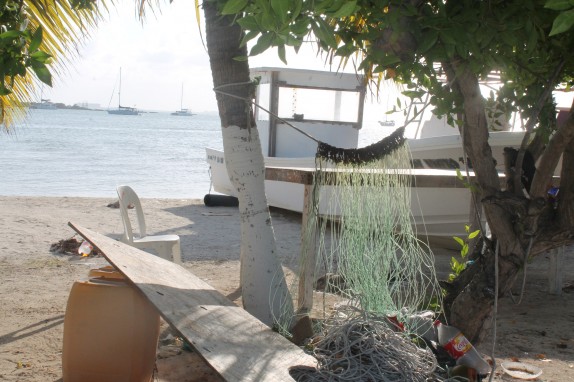 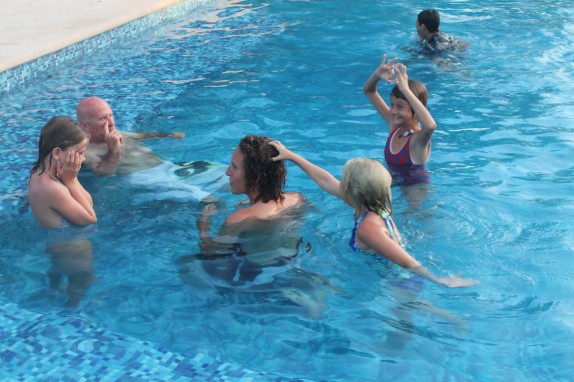 Lily and her friends playing statutes with Jake. They asked Jake why was not married!!

4 Responses to Kissin’ The Lovely Shore of Isla Mujeres