>We limped in to Naples last night without a forestay. On route to Key West, we had heavy seas and winds gusting a little over 40 miles per hour. We had spent the morning trying to trim sails to our beat into the wind. We had finally settled in and were making some progress into the wind and waves when we see our headstay snap from its fixed position at the bow. (The headstay is the wire cable that attaches to the bow of the boat and that keeps the mast upright. The head sail (Genoa) attaches to the headstay via a Roller-Furler system). The headstay, roller-furler and sail were all thrashing about the boat. Randall and Michelle went foreward on the pitching wet deck for the job of securing the headstay and roller-furler and then bringing down the staysail to take pressure off the mast. It probably took about an hour and, from the helm, I could tell they were getting beat up and almost thrown overboard trying to control the loose headstay and sail in the conditions. I was at the helm and Jake was securing the lines they were using to try to get the headstay secured. On everyone’s mind was how well the mast would hold up without the headstay’s stabilizing force. We made for Naples and got there mast intact. The headstay’s brand new shackle broke, causing the problem. We aren’t sure why but one theory is that the anchor somehow came down on the shackle with enough force to break it. But most likely, it looks like the part was defective. Randall has a very bruised foot and both he and Michelle are sore today. We have a replacement shackle so the fix should be easy. Pizza, beer and ice cream were attacked with much gusto last night as we talked about how much worse it could have been. 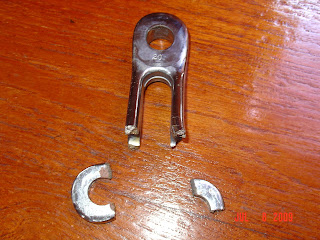 Toggle that used to connect the headstay to the boat