One of the Rio Dulce marinas, Hacienda Tijax (Tey-hash), is also a 500-acre rubber plantation which has a number of trails through the property for hiking and horseback riding. Yesterday, we got around early for an 8 am trail ride.
Our horses were saddled and waiting on the trail when we were introduced. Raul sized us up and put Lily on Laurie and Jake on Mundeco. I was given sweet little Sorrel. Raul handed Randall the reins to Tornado and we all waiting in anticipation to see what Tornado thought of being mounted. No rodeo today, though. All four horses were resigned to their duty of trotting up the muddy trail with incompetent riders astride.
The ride started off on a local dirt road. We followed the road just a bit and then turned up a private road on the rubber plantation, going past a low lying grassy field. Three horses watched us go by. The private road began to climb a little and took us past the two houses which Raul explained belonged to the plantation owner and his daughter. The daughter’s house was really pretty with a lot of exterior bamboo and rock. Although we didn’t get up close to the house, it sat on a bluff overlooking the Rio Dulce basin and must have had a great view. After about 20 minutes of riding, we dismounted and hiked a jungle trail along the slope’s face. The trail was well tended but went through thick jungle foliage. One of the main features of the trail is a rustic suspension bridge crossing a jungle creek. Lily and Jake lead the way across the bridge and each step they took reverberated down the length of the long bridge. There were hundreds of plants below and we could barely make out the river water so far below. However, many of the plants reached right up and canopied the bridge.
Our guide, Raul, spoke a little bit of English. He usually understood our questions but his answers were all in Spanish. This was really good as we all want the practice but we may have missed out on some of the info. However, he pointed out the Corozos Palm which is used for roof thatching. He also pointed out some termite nests up in the trees but I think he was saying that the termites were killed and ants then take over the nests.
We got back on the horses after 30 minutes of hiking and headed higher up the slope through the rubber trees. The rubber trees, all very spindly, were planted in long rows following the curve of the terraced hillside. Each rubber tree had a very small collection bucket and the cream-colored sap was slowly dripping out of the trees. We are curious about the market for this rubber but we didn’t try to get into plantation economics, given the language barrier.
We arrived at the top of the property where there is a rock lookout tower called a Mirador. We climbed the tower for a view of the entire river valley. We then got back on the horses and made our way back down the slope. Raul showed us some young teak trees. He rubbed on the the teak leaves which brought a red paint to his fingers. He indicated that the Maya Indians used the teak leaves to put red streaks on their face.
Lily’s horse typically lead our little party and Raul keep order from the back of the line. Most of the time, Laurie knew the way but occasionally Raul would call out “Izquierda” or “Derecha” which was sort of meaningless to both Lily and Laurie. However, by the end of the trail ride, we were a little better at understanding izquierda for left and derecha for right. Both Tornado and Mundeco had a little interest in biting Laurie and Sorrel and Tornado would also bit Mundeco but Mundeco was a little more wary of Tornado. Near the end of the ride, we passed a few people in a field and a young boy came running up to say Hi to Raul. He ended up on the back of Raul’s horse and we got to meet 12-year-old Geraldo and found out that he likes to ride and was on his way to school. School starts in the afternoon here and goes later in the day.
We finished off the trail ride with burgers at the Tijax restaurant and a swim in their pool. We sort of wish they had room for our boat here. Mar Marina is very nice as well but no pool! 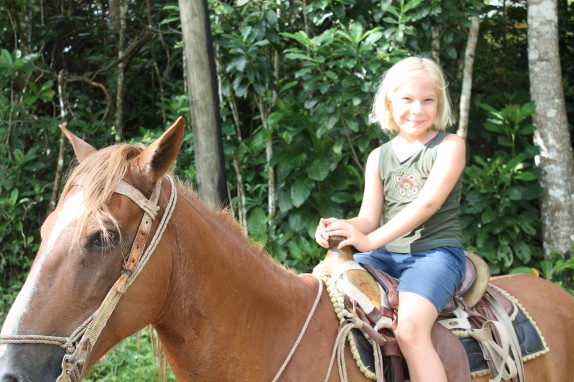 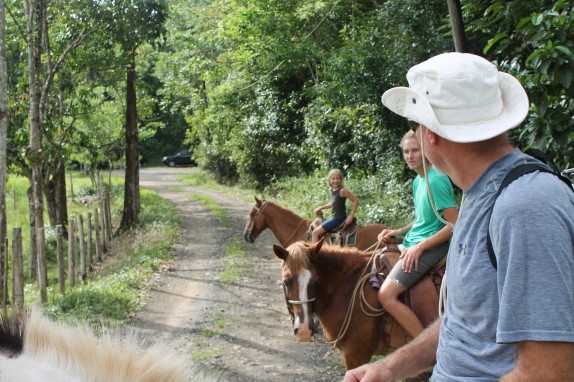 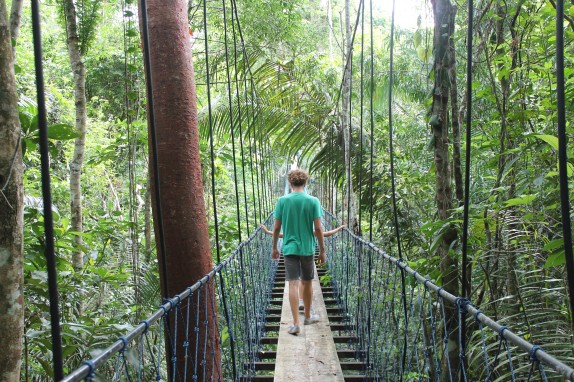 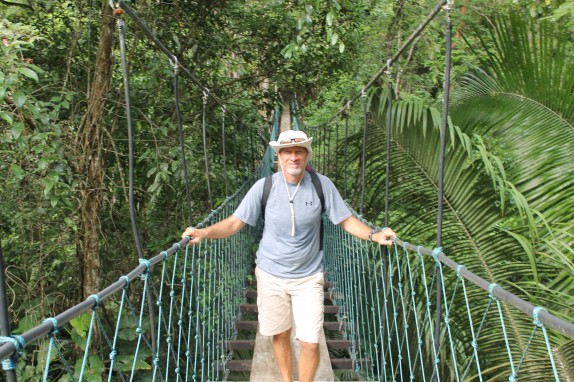 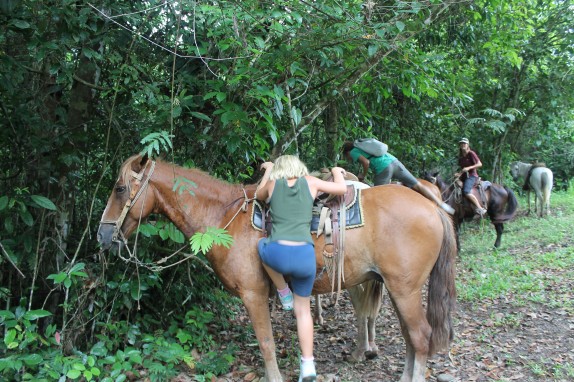 Climbing back on board. 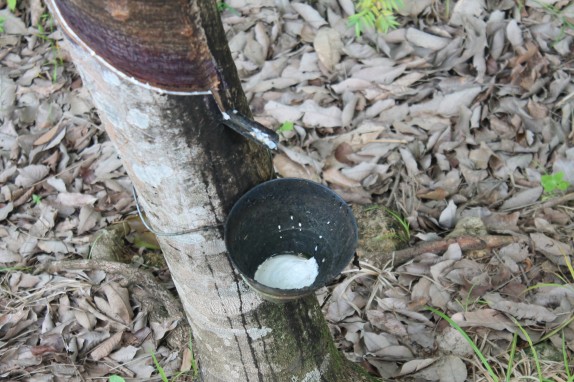 Jake on Mundeco. His legs hang way past the stirrups. 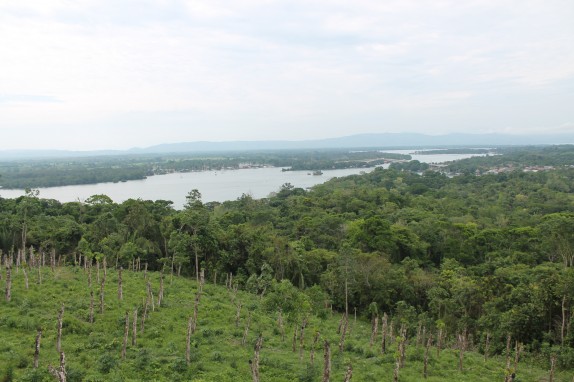 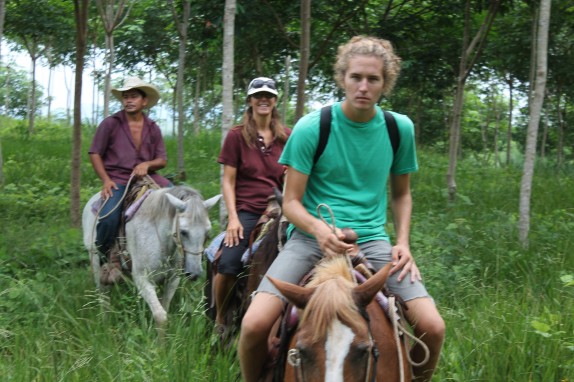 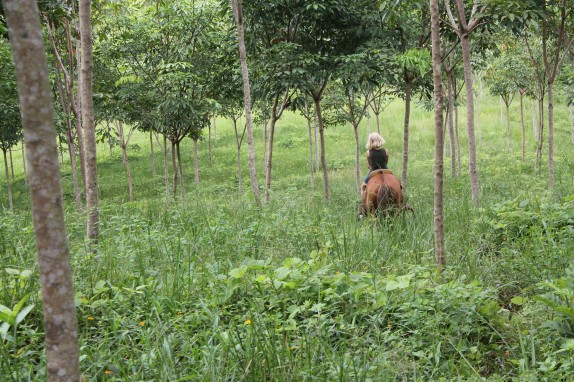 Izquierda! Your other izquierda! 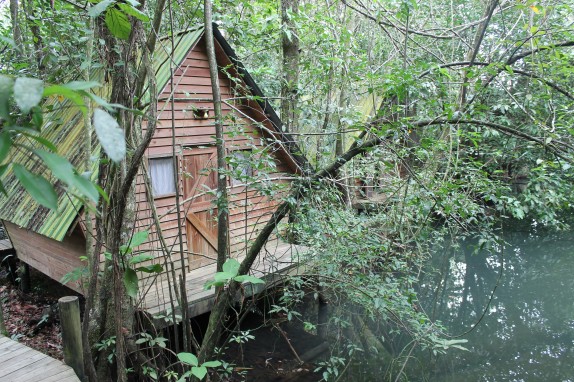 Tijax cabanas for rent all connected by a boardwalk over the water. 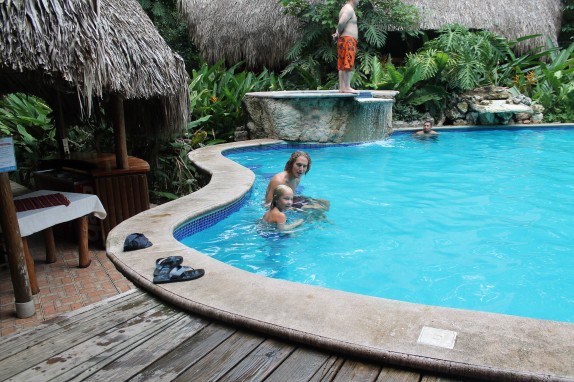 Cooling off after the ride. Hope the horses have a pond to jump into.

One Response to Tijax Trail Ride