You are here: Home › Playing Around Isla 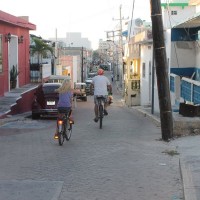 The water has been calm and inviting the past few days. On Monday, we took the dinghy over to the northwest point where we have seen several snorkel tour boats anchor. Randall and Lily got in the water and snorkeled around the rusty boat carcass which lies in the shallow water. I sat in the dinghy and watched, still a little congested and not wanting to press my luck by getting underwater. There were about 20 others snorkeling around so they had plenty of company. I could tell there weren’t many fish out there but, of course, it is still fun to snorkel around and search out sea life, shells and other underwater curiosities. We also snorkel regularly off the marina’s beach and see several different types of fish swimming in and out of the seagrass here so I need to do some fish research and try to id some. There are a couple of small spotted rays hanging around, too, that we like to keep our eye on.

Monday night, we had dinner here at El Milagro. The employees had cooked up a huge pot of spaghetti and sauce and all were invited. We sat and chatted with Mike on SV Sturdy Logic and Jules on SV Coquina. Like us, Mike is watching weather for a good time to cross to the states. Jules is getting some engine work done and then plans to sail west and check out the anchorages along the less populated Progresso area. They are both solo sailors and I am always impressed with their stories of managing alone on a boat. 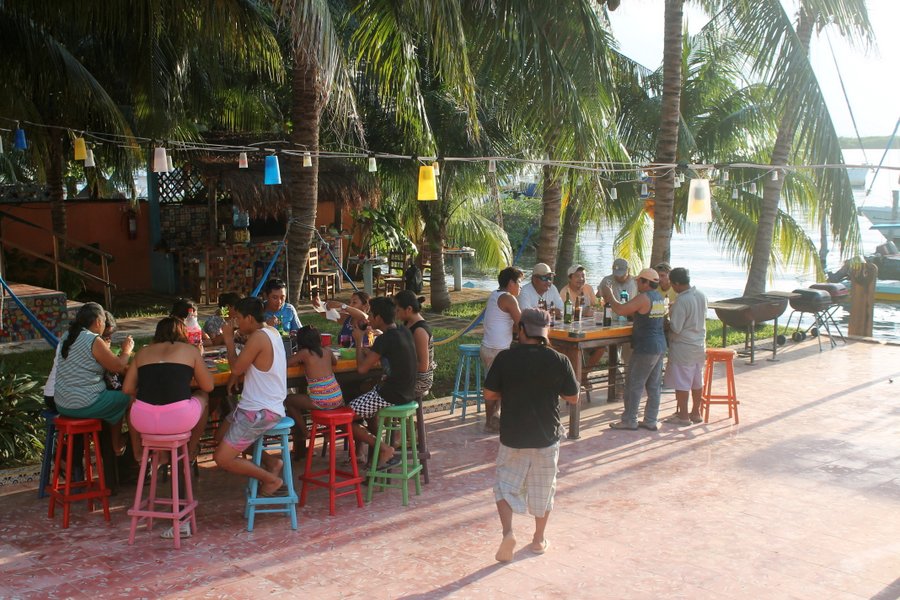 Dinner at El Milagro. The employees easily outnumber the guests as they are like a big family here at El Milagro. I kind of want a job but Inga, the receptionist, would be a tough act to follow and also probably isn’t going anywhere.

Although I am tardy on the fish research, I did take time to do some bird research yesterday. There are several large black-and-white seabirds which have taken residence on the huge derelict ketch next to us. In my five minutes of bird research, I stumbled upon some pictures of Frigates which seem a possible match. They are pretty in flight, a well defined “W”, but ruffle up their feathers when sitting on the rigging which, according to my indepth research, is a cooling trick for sitting around in a black coat of feathers in the hot Yucatan sun.

Birds have taken over the rigging of our neighboring boat.

Yesterday, Lily and I went stand-up paddleboarding. I have never gotten to try this and it was really fun. We may try and make it a little further up the shoreline today on the boards. After playing around in the water, we went for an evening bike ride downtown. We hardly ever get our boat bikes out despite all that enthusiasm I expressed when we bought them. The problem is one of numbers – two bikes and three people – and one of infrastructure – usually substandard and crowded. However, El Milagro has several loaner bikes so we borrowed two of theirs and decided to weave our way through the masses. Lily went on one of our bikes because it fits her better. We rode around downtown, stopped for tacos and beer and then, of course, ice cream. Our favorite ice cream place is now closed for the holidays which is a puzzle. However, we managed to find dessert, not quite as good but still cold and sweet, and then pedaled back. 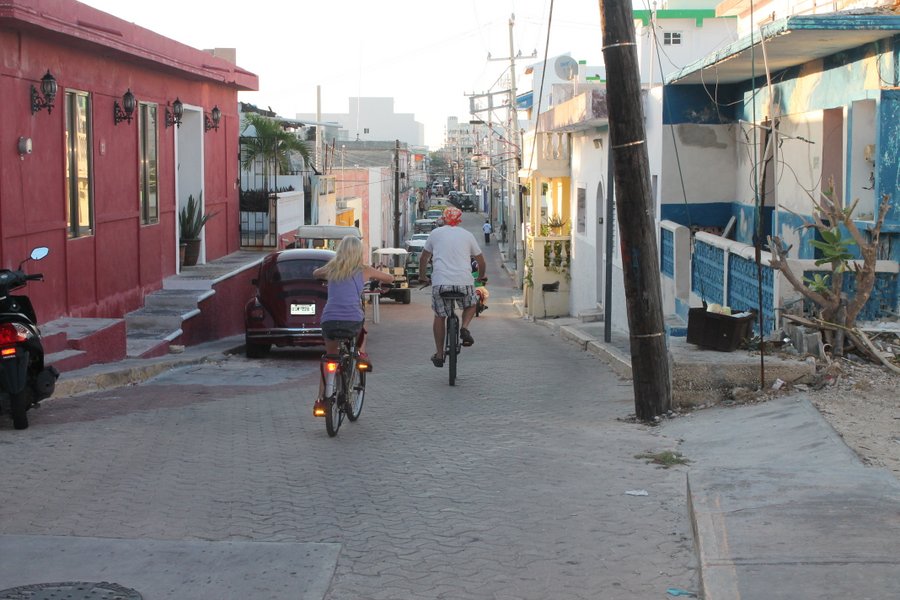 Biking on an Isla Mujeres back street. It is nice to have the street to ourselves. The sidewalks are a bit narrow. 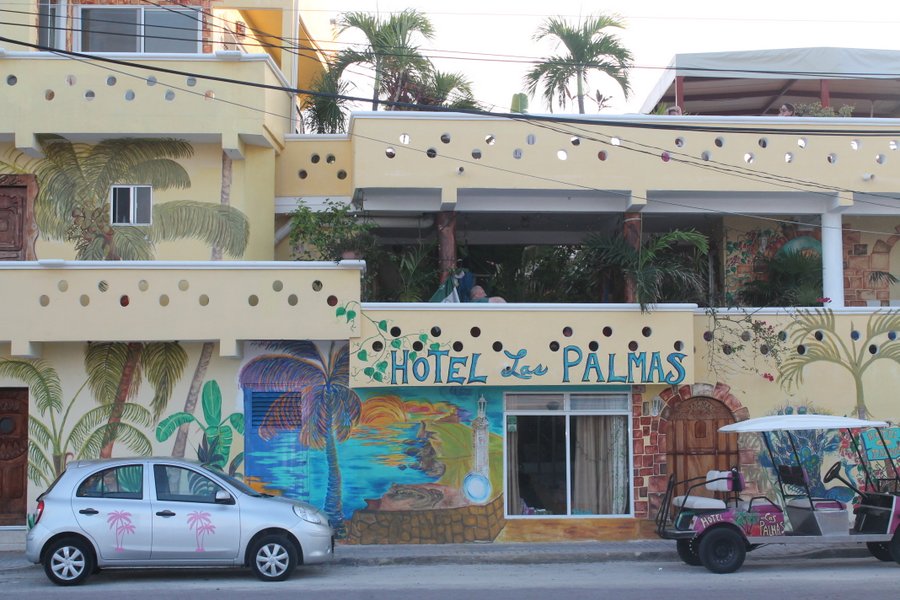 There are lots of small, colorful hotels downtown for those who don’t want to stay on the North Shore resorts. 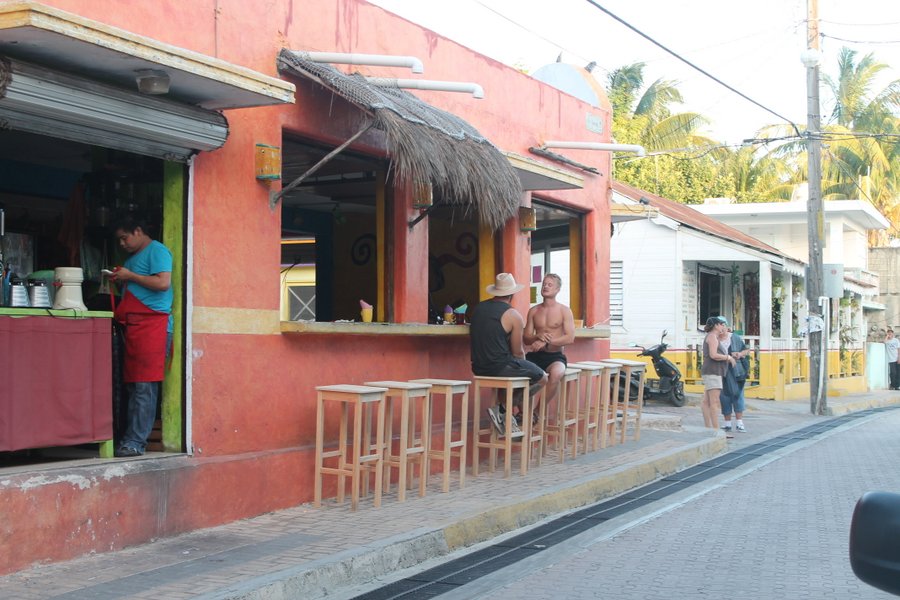 And lots of places to display your tanned abs.

Just Hanging Around In Recovery
Interview with Eric Schott, Owner of El Milagro

One Response to Playing Around Isla