You are here: Home › Pacific Highway 101 and Crater Lake 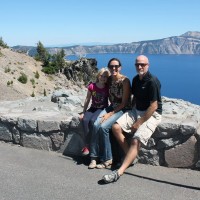 We finally headed down the Pacific Highway 101! We got back on the road last Friday and headed to Tillamook, OR. This is a great place to hop on the Pacific Highway 101 because you can start off at the Tillamook Cheese Factory gorging on free cheese. We could not believe the number of tourists visiting the Tillimook Cheese Factory. Free cheese is a big draw. In addition to free samples of several cheese varieties, they have an elevated viewing area where you can watch a handful of bored workers cut cheese. The cheese enters the room on a conveyer belt – one long, uncut hunk of cheese. A couple of cutters operated a machine that wire cut the massive blocks down into smaller rectangles. These blocks went down for another cutter to tackle cutting them into the package size cheese. After a few minutes of observation, we marched over to the ice cream parlor to struggle over the 30+ ice cream flavors. The line for ice cream was a 20 minute wait which made the struggle even more protracted. No, maybe I should try Grandma’s Cake Dough. But, salty caramel, mmh. I didn’t get enough coffee this morning. The Chocolate Chunk Espresso might really perk me up. Then Lily said she wanted vanilla. What??? You can’t do vanilla!! You can’t. 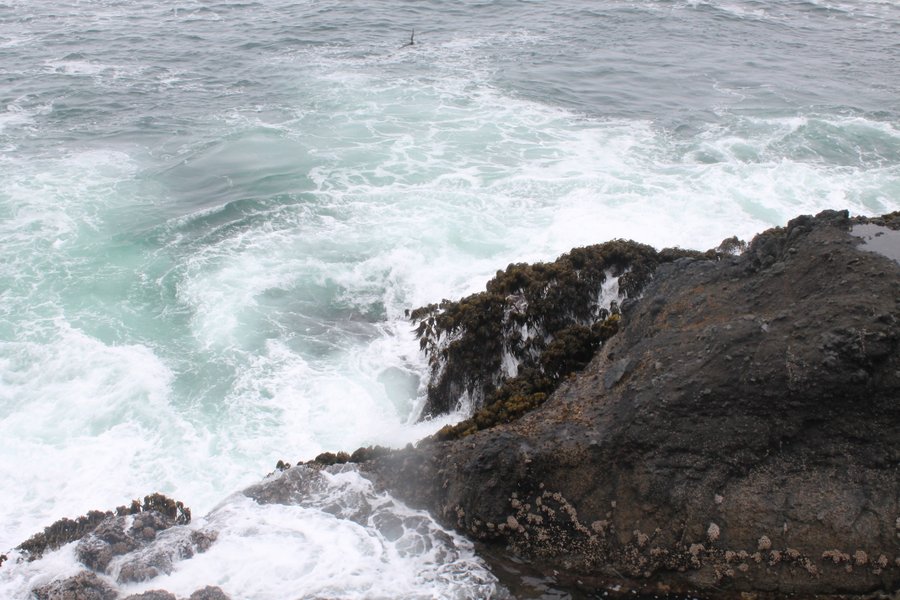 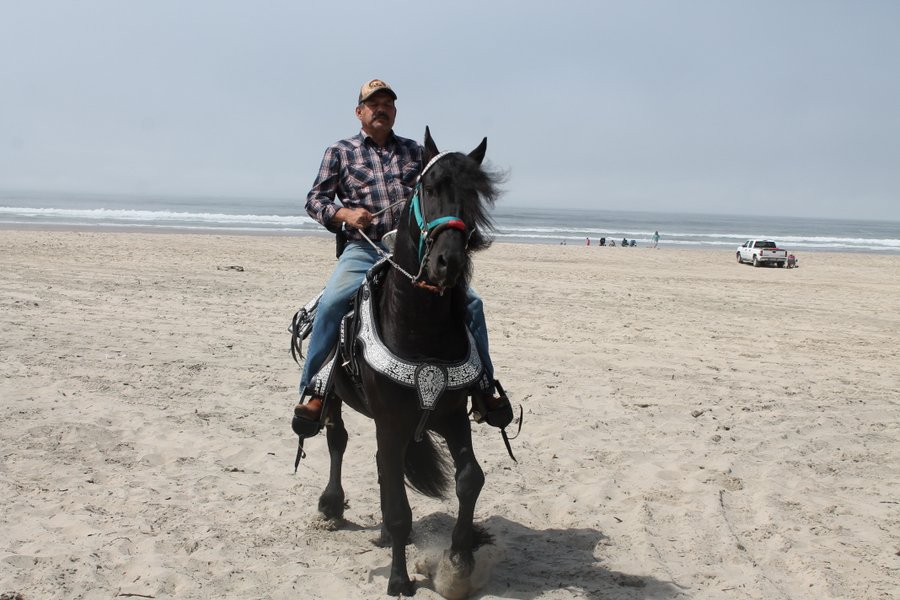 Vaquero exercising his horse on the beach. 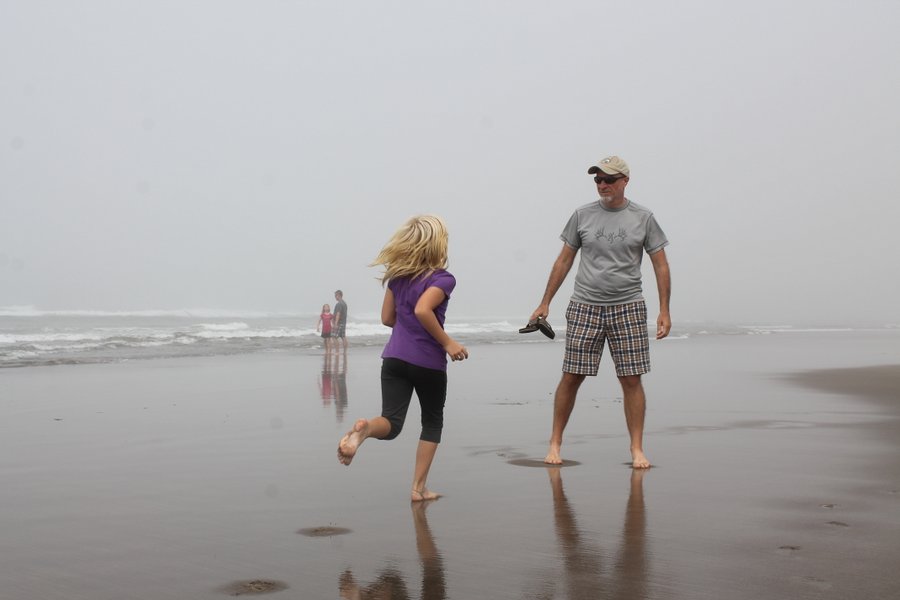 Playing chase in the sand.

We actually spent three nights in Tillimook parked on the street beside the Tillimook County Library. We had taxes to do. There could be no nearby temptation for Randall. Plus, there needed to be a place for Lily and I to go and hide for hours and then peek back in the trailer occasionally to say perkily, “Done yet?” “No?” “Um, Ok, we’ll just get a snack and go.” Anyway, Lily and I had a ball. She read several books in her favorite chair in the kids area. I piled up a table with art and travel books and just dabbled in interesting books. Randall actually finished in two days but we had grown so attached to our street parking that we stayed one more night in order to walk around downtown. 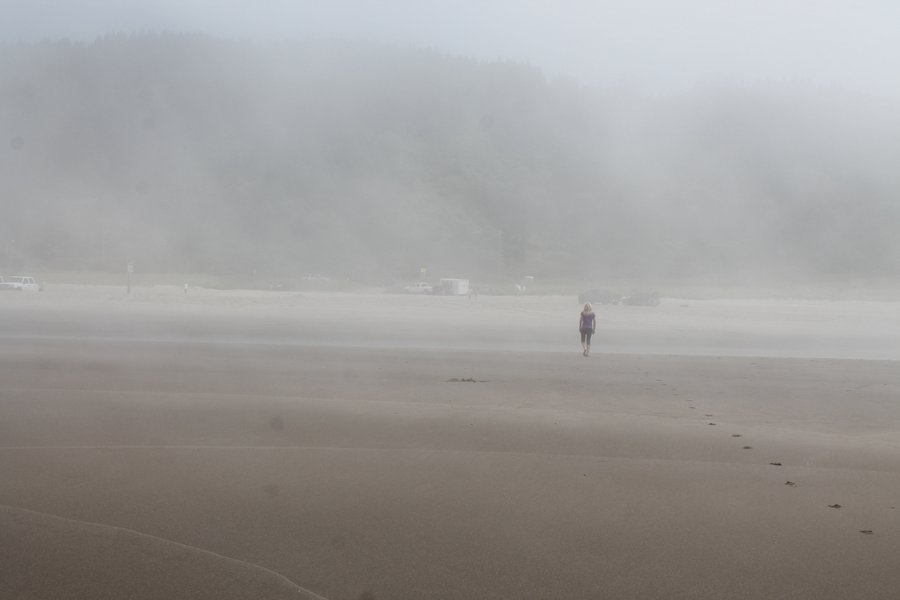 Footprints into the fog. 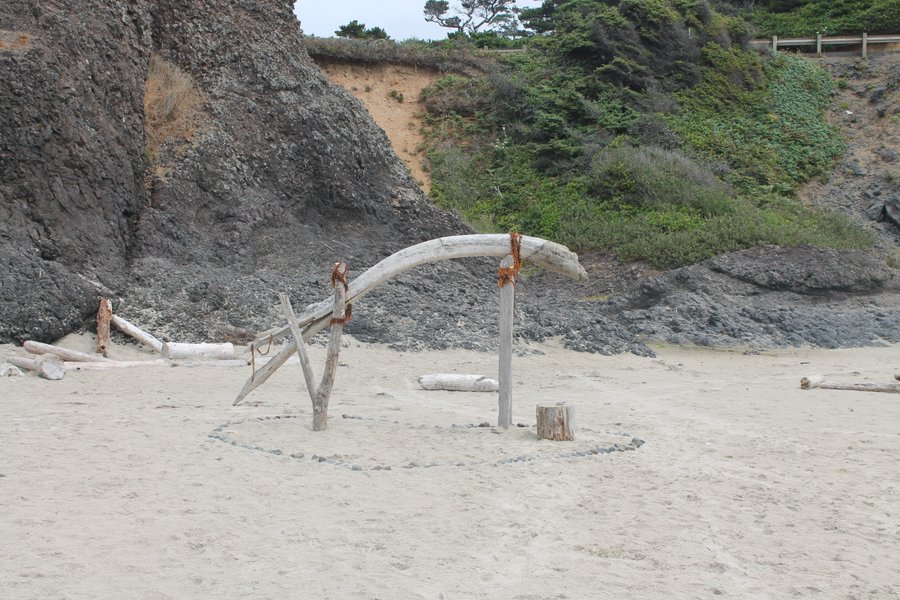 Aww, now that looks like the authentic beach wedding spot. 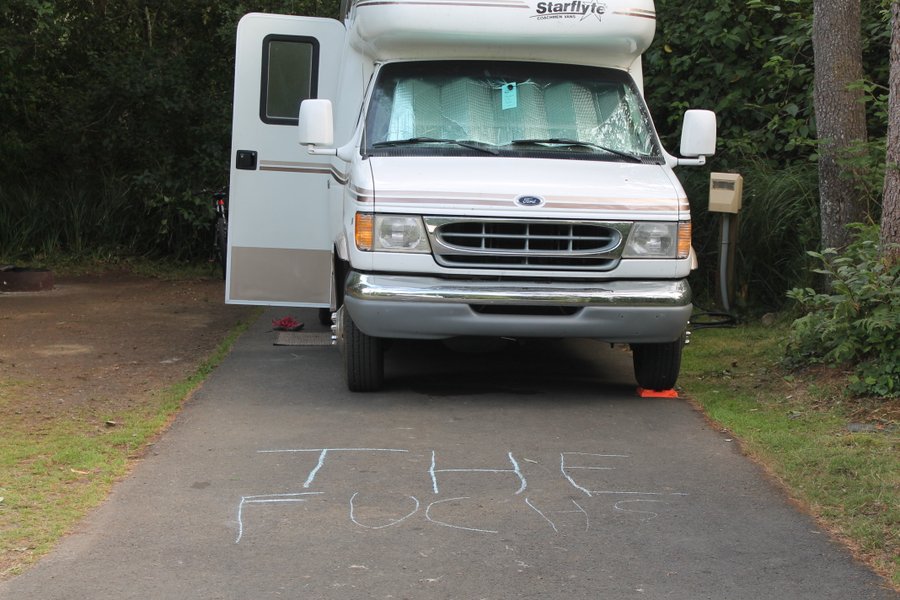 Lily chalked “THE Fuchs'” in front of our spot at Devil’s Lake.

We spent two days driving along Pacific Highway 101. The weather was cloudy and cool. The scenery is breathtaking, of course. We stopped at a few beaches to stare at the waves and do some beachcombing. We stayed the first night at Devil’s Lake State Park and the second night in a parking lot in Newport City. At the parking lot, we got the bikes down and biked down to and through the Historic Nye Beach area which had lot of quaint clapboard sided buildings. Lily has been having problems with the new bike’s gears and Randall didn’t like how the bearing were looking either. We made the decision on this ride to trade it in but couldn’t find a replacement at the Newport City Wal-Mart. The next day, we got off Pacific Highway 101 and headed to Eugene. We had a nice walk downtown and then ended up at the Eugene Wal-Mart for the night where we found a pink bike that Lily approved of. It’s identical to her other one but we are hoping the mechanics are a little better. 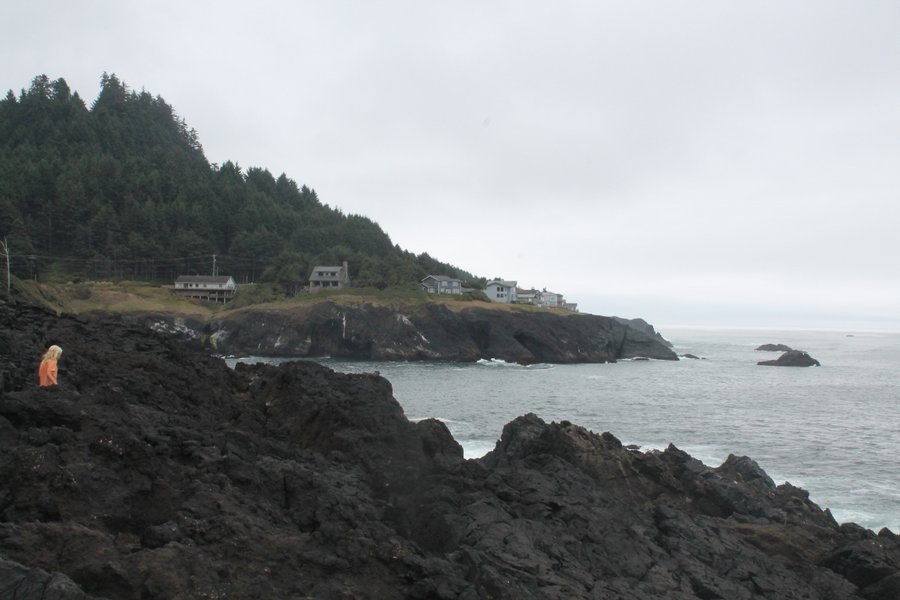 The homes along the water have a forest of trees at their back and the Pacific at their feet. So beautiful.

From Eugene, we headed to Crater Lake. Crater Lake was formed into a neat, round abyss left by a massive volcanic eruption. The snow melt and rain eventually filled up the basin at the top of the mountain and the lake is pristine since no streams flow in to cloud the water clarity. There were signs at the park entrance warning that visibility might not be good due to the local forest fires. When we got to the rim, we could see the fire raging to the west with huge clouds of smoke billowing from it. However, not enough smoke was drifting our way to spoil the view. We did a couple of short hikes at the rim and also toured the old lodge there which was restored several years ago. It was a longer hike to reach the water’s edge so we didn’t get to see what the water looked like up close. The view from the rim is incredible.

Forest fire spewing smoke near Crater Lake. Lily would not let me take a step closer for the picture. 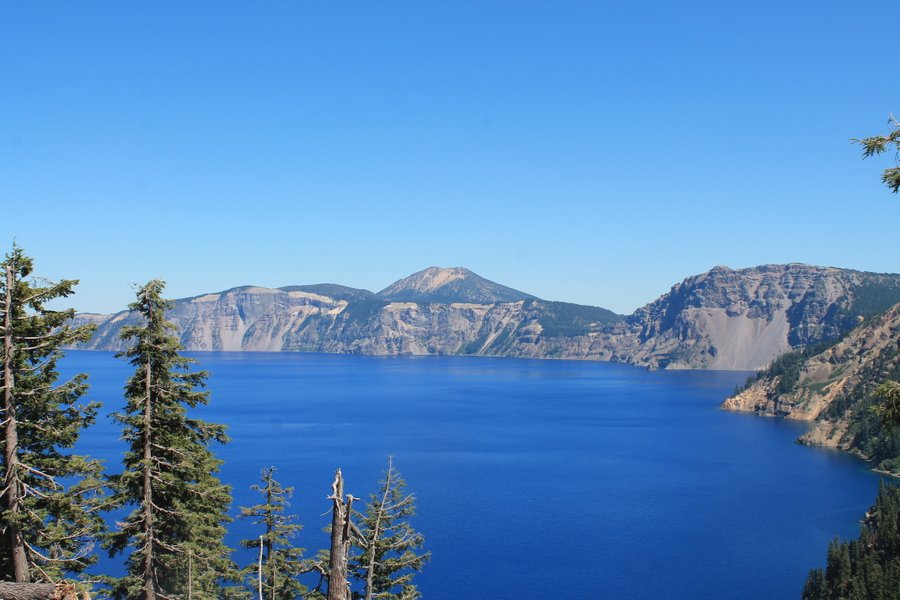 Maybe there is a paint color out there called Crater Lake Blue. It was gorgeous. 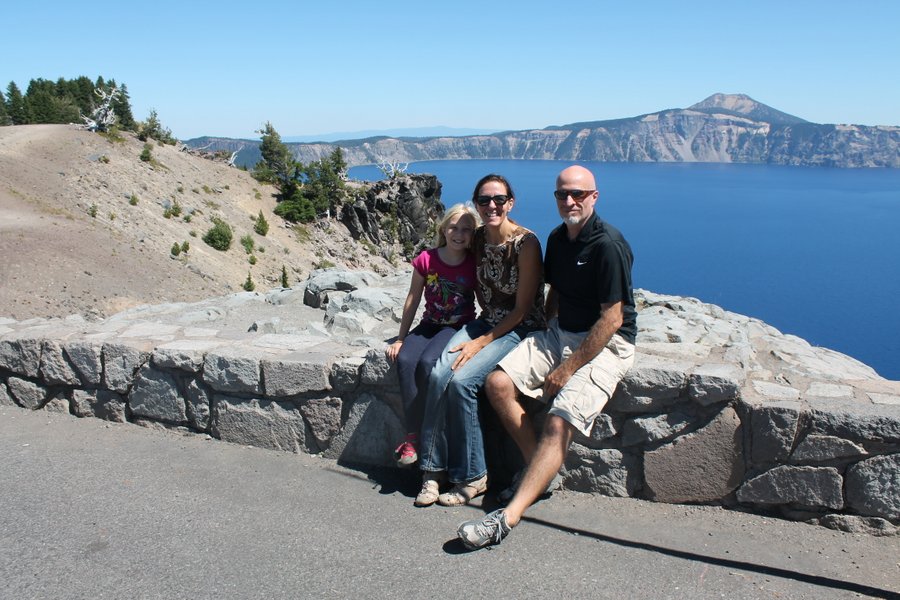 Family pic near the north entrance to Crater Lake. 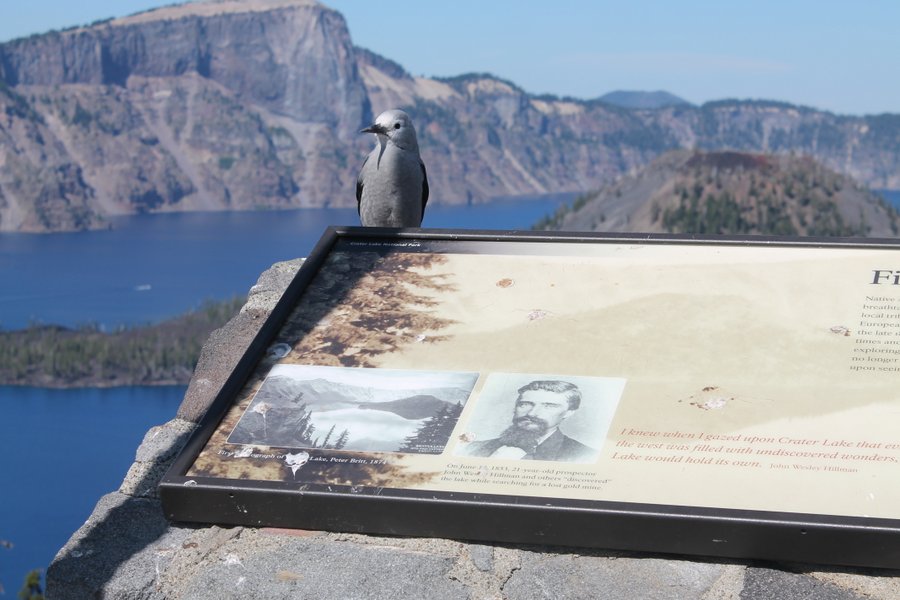 This bird presides over the historical marker at Discovery Point.

Today we drove past Mount Shasta and turned in at Redding for the night. We had the first swim of the trip at the pool at the Marina RV Park near downtown Redding. After doing a couple of week’s worth of laundry, we biked down to the Sacramento River Trail and tried out the new bike. So far, so good.

One Response to Pacific Highway 101 and Crater Lake