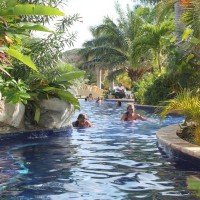 Easter Sunday started off rainy on Roatan. There were probably a few postponed egg hunts. We were watching the weather because we had plans to go to Parrot Tree Bay Resort for the afternoon. The sun finally broke through around 1 pm and we dinghied to Brooksy Point to meet up with our volleyball team for the Volleyball Volleyball Volleyball Easter Road Trip. Woot! Woot! 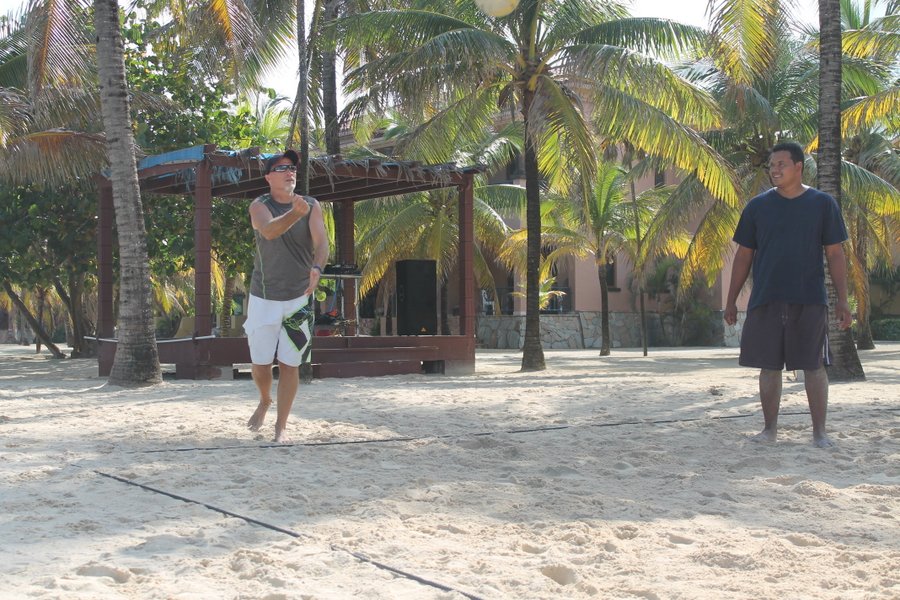 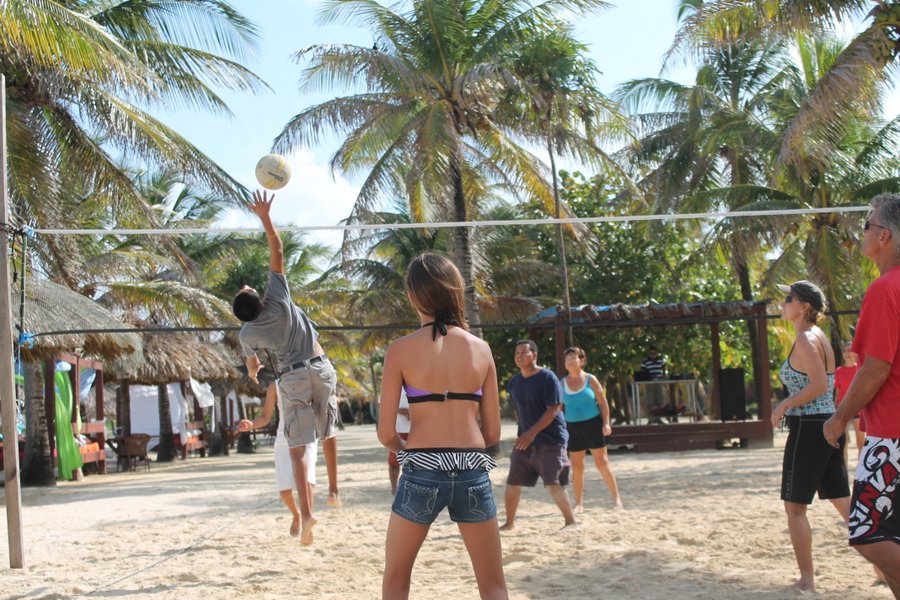 Ober with a good block at the net. 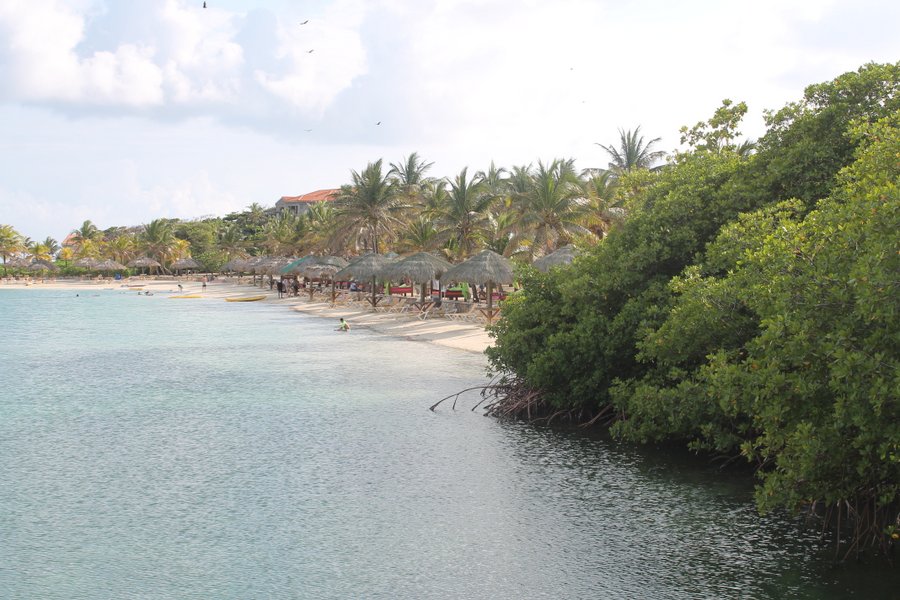 There were twelve of us which, in terms of transport, ended up being a fully packed taxi and Susie and John’s fully-packed jeep. It was probably good that our road trip was just a few miles down Roatan’s central road. Parrot Tree is an upscale resort on the south east side of the island with pretty painted condos, blooming hibiscus and shady palapas. There is a peaceful little saltwater cove for kayaking and paddle-boarding with arched bridges over the water so that you can walk all the way around the cove for lots of pretty views There is also a huge, multi-level freshwater pool with a slide, waterfalls and several islands with draping greenery and flowers. “Couldn’t you have found a nice place to play” Matt quipped as we walked over to the volleyball sand pit. He had to give Susie a hard time knowing she spent several hours negotiating all of us some free Parrot Tree passes so everyone got to enjoy Volleyball at the Parrot Tree Bay Easter Cookout. 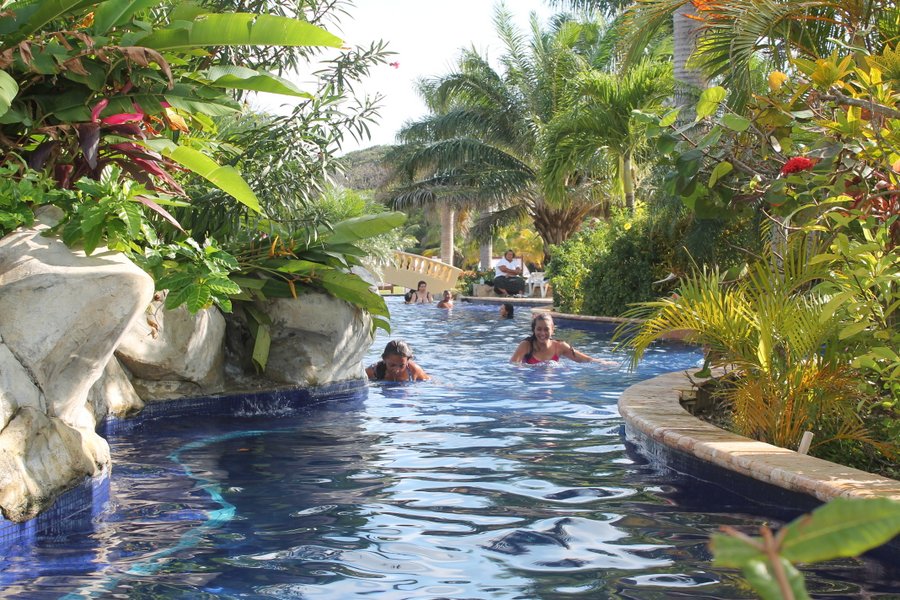 Lazy river part of the pool. 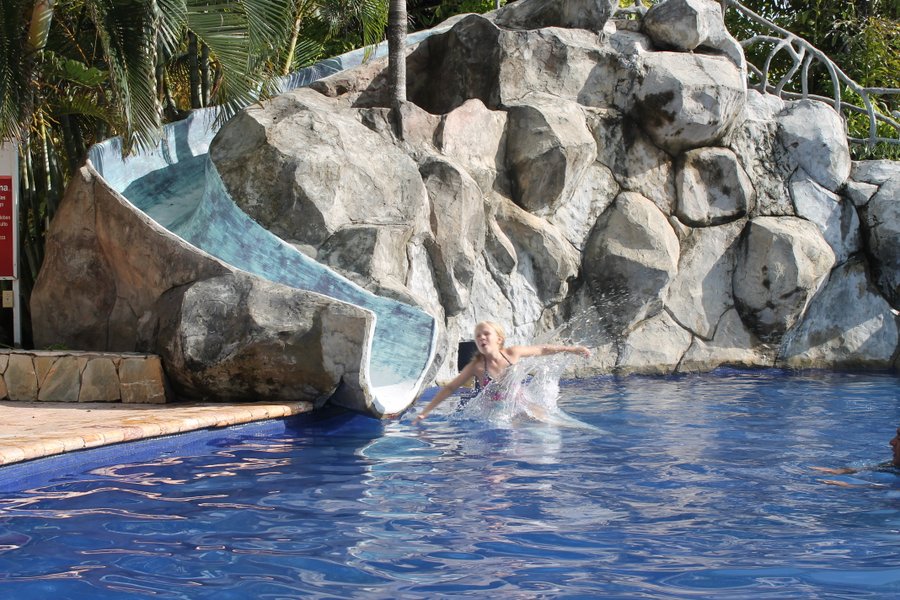 Splashing off the slide. 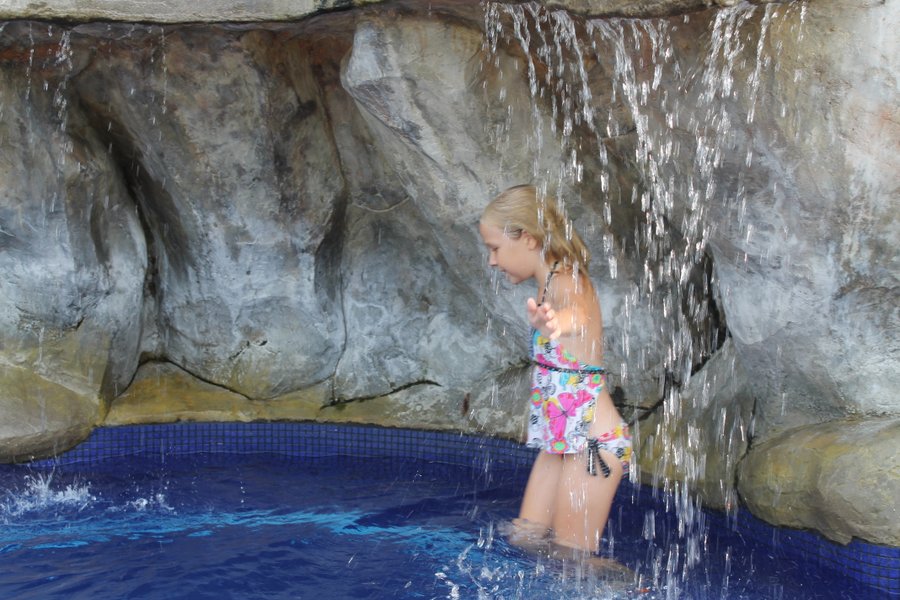 Splashing in the waterfall.

We got started playing right away. We immediately drew a few other interested players. We ended up rotating in- and out- of the games as new players showed up wanting to play. Sports are contagious! I have no idea how many games we played but it was well into the double digits and had a great time ooohhing at good plays and laughing at complete misses. Around 5, we ordered some burgers and other snacks from the palapa bar and grill. Lily handed out her pretty cascarones. Most recipients wanted to keep their eggshells but Susie decided Ober’s head would be good at cracking eggs. Susie had spent the night before regaling us with tales of how to properly celebrate Carnival by being ready to throw water and squirt foam on your fellow revelers so I had a feeling that her cascarone would be find its way on to someone’s head before the day was done. Matt and Karen of SV Where II also had to break open their egg but had the camera ready for pictures first. Lily had painted a cute little Gidget on the bow of a sailboat on Outlandish’s egg so they took theirs’ home for a keepsake. What a fun day. 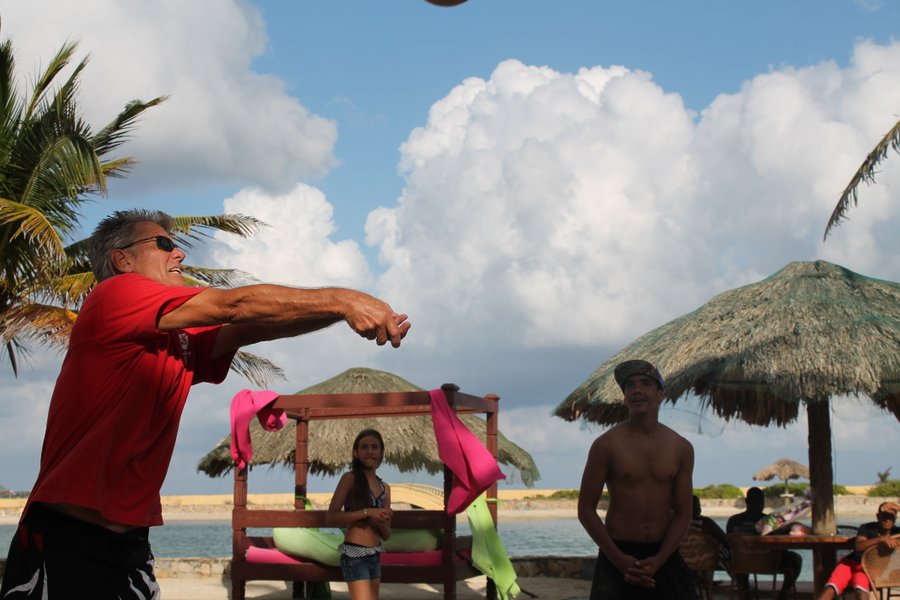 Matt stretching out for a good hit. He’d be a great coach and never misses out on a chance to congratulate a good play. 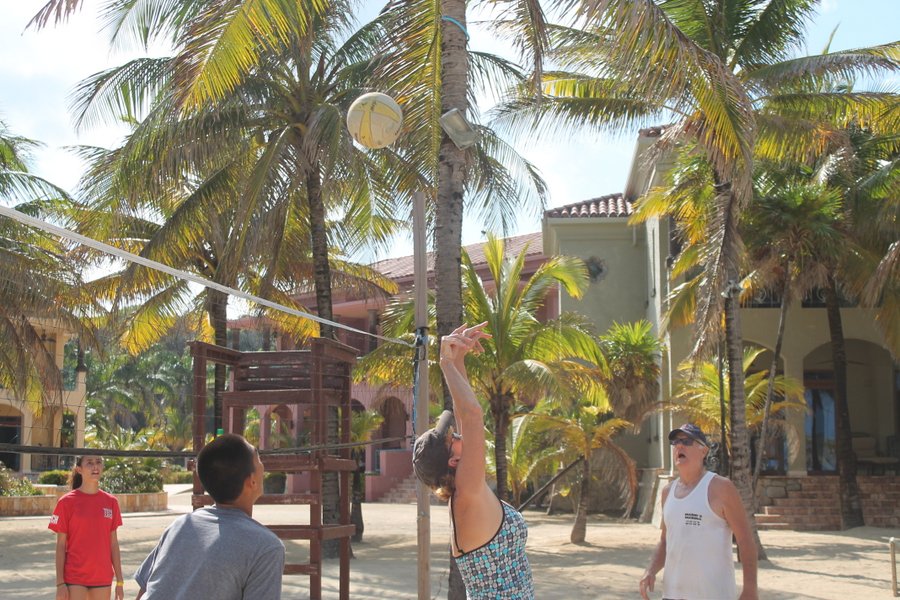 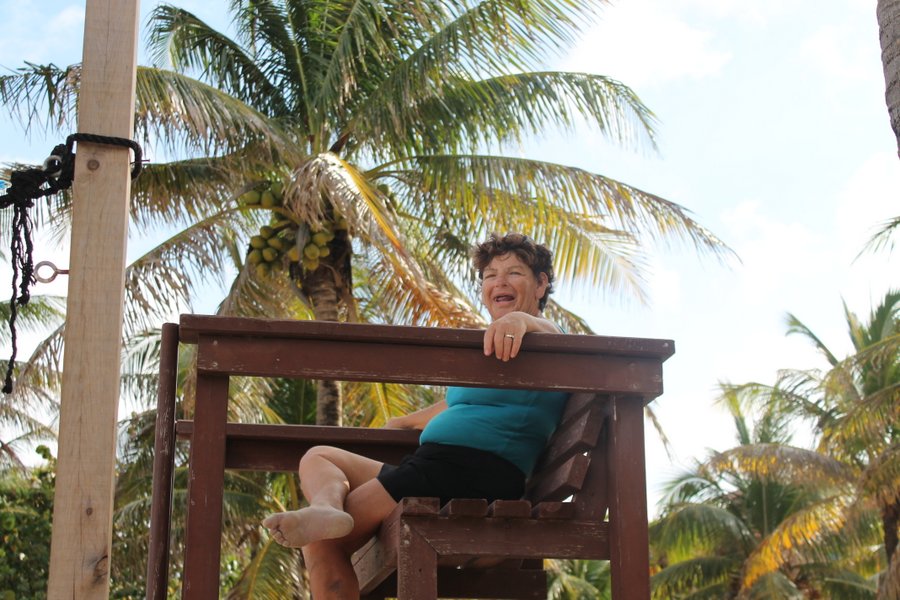 And this is Susie who loves to play, party and always knows whats going down on the island!

We got back to the boat at dusk and Lily headed to her room for a late Sunday redecorating session. She has never had much interest in her room in past trips, actually sort of avoiding any time in her room as “stuff with no home” quickly accumulated in there. However, she is all about keeping it tidy and pretty now. 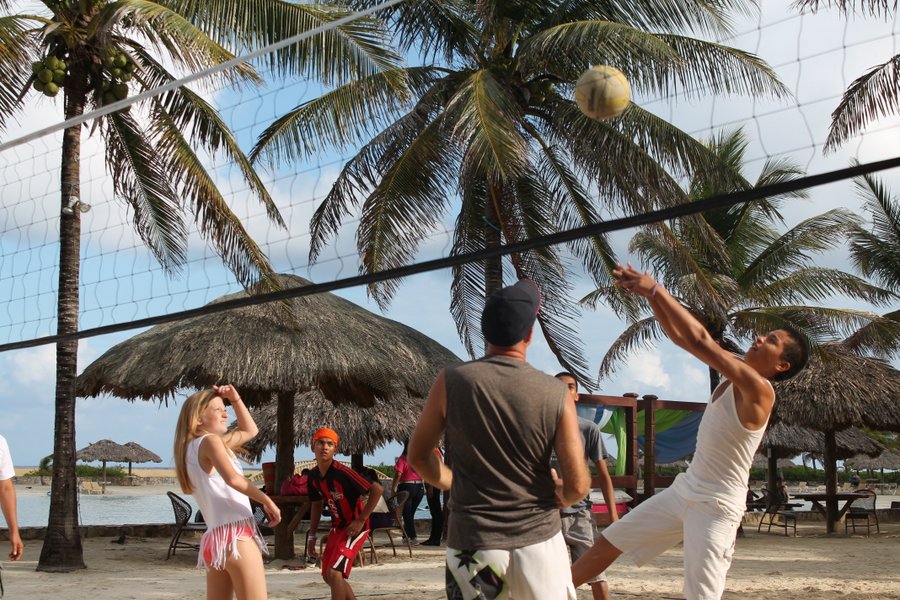 Samual jumping for this one. 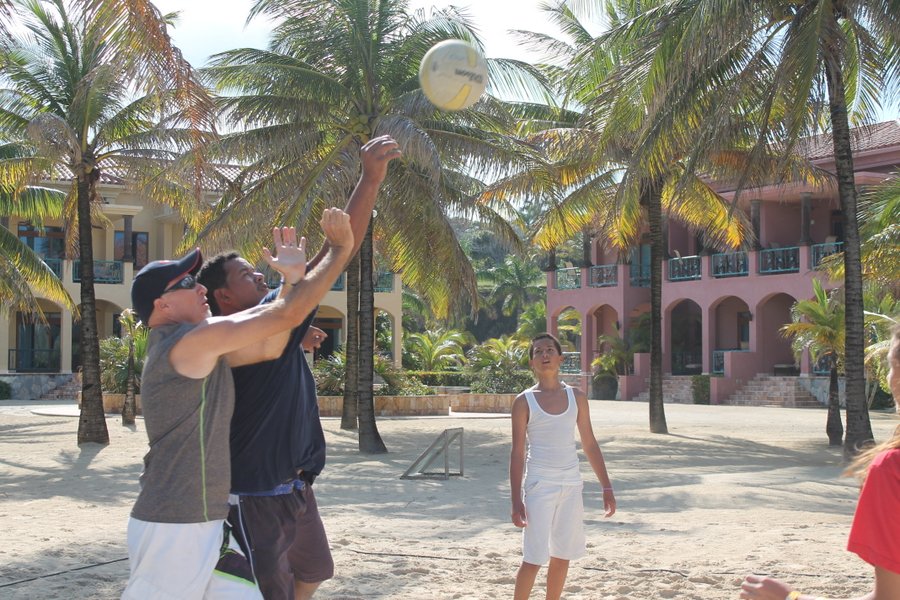 There are always a few collisions. In fact, Renee limped home with a huge shin goose-egg.