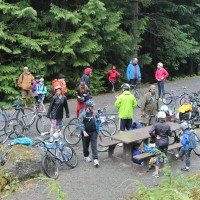 Throughout our Gallegos visit, there were occasional references to the upcoming Tour de Washington planned for Sunday. The Gallegos had long-in-the-making plans to group up with their Seattle friends for a 22-mile bike ride from Hyak to Rattlesnake Lake east of Seattle near Snoqualmie Pass. They had already accomplished a reconnaissance bike ride of the 3-mile completely dark railroad tunnel which kicks off the trail. We were invited to tag along and immediately said “Heck yeah.” However, our next words were “hope we can keep up.” Lauren assured us that it was downhill all the way. I took comfort in this description. Lily, having been recently duped into long mountain hikes which we tried to pass off as short strolls, was not so lulled into complacency. 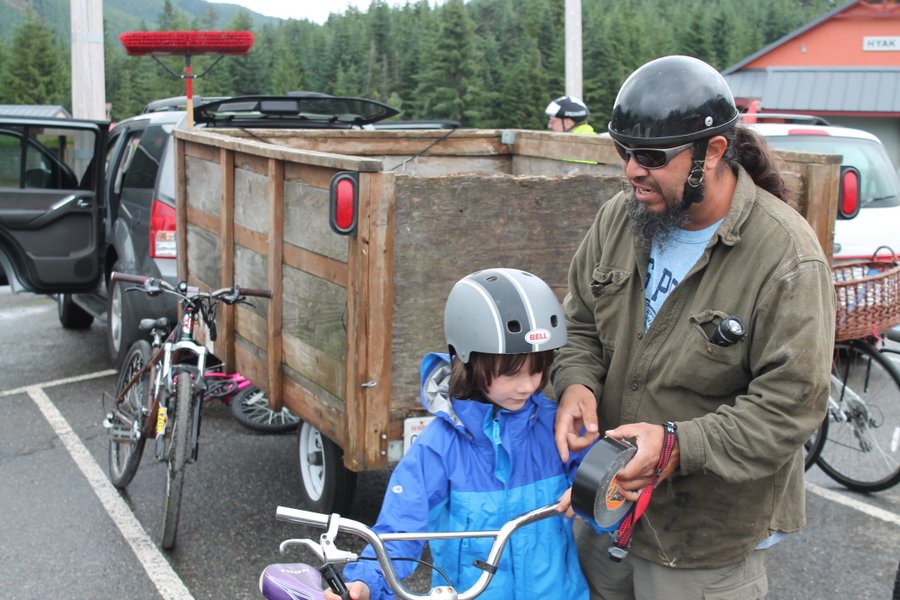 Floyd making sure Sam’s light is mounted. Sam, 8, was at the front of the pack the whole time. 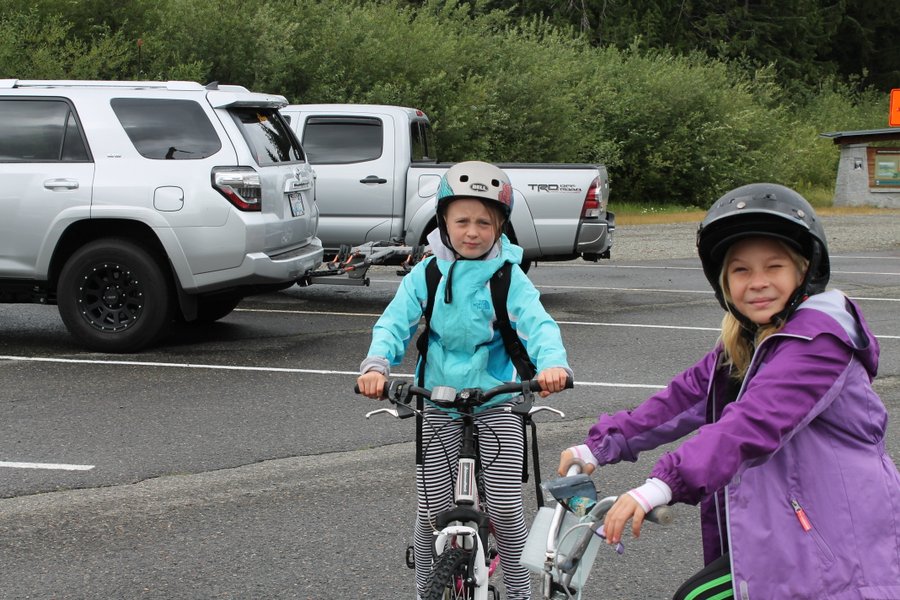 Annabelle, 8, and Lily getting ready to start.

The caravan departed early Sunday – several SUVs, our RV and two fully loaded trailers, one for the bikes and one for the sailboats, kayaks and paddleboards to be deployed at Rattlesnake Lake after the ride. I had mentioned to Randall that the kids would want to ride in the RV. He was for trying to sneak off with just Lily and Archer on board. However, there ended up being only two other kids meeting at the Gallegos’ casa so we easily seated four kids and Arrow for the short ride. Randall still eyed them nervously while I buckled them all in and gave me a look that clearly said “give them an inch and they will take complete control.” They were perfectly composed passengers. No one had to pee and I only had to say “no throwing stuff” once. 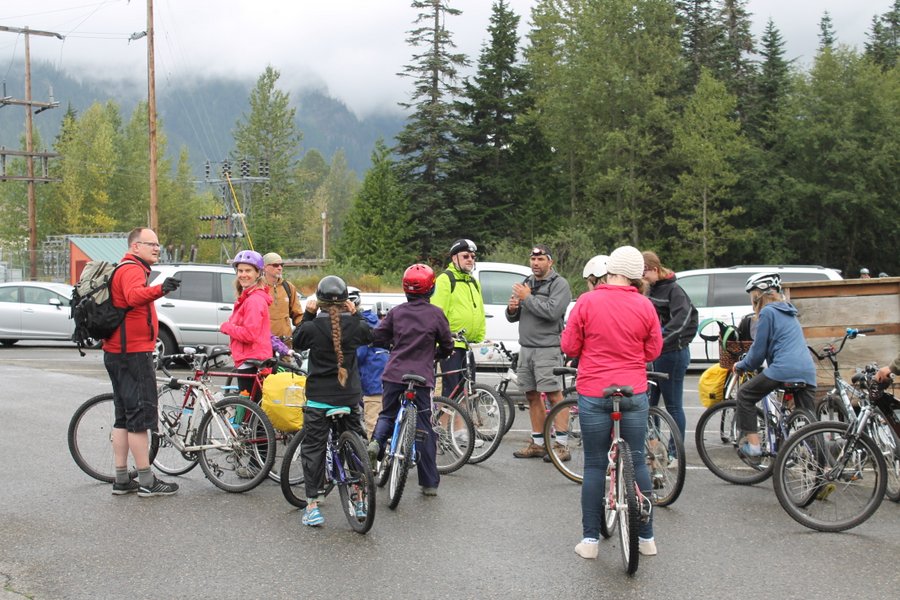 The pack circled around Ben and Dietrick for last minute instructions. 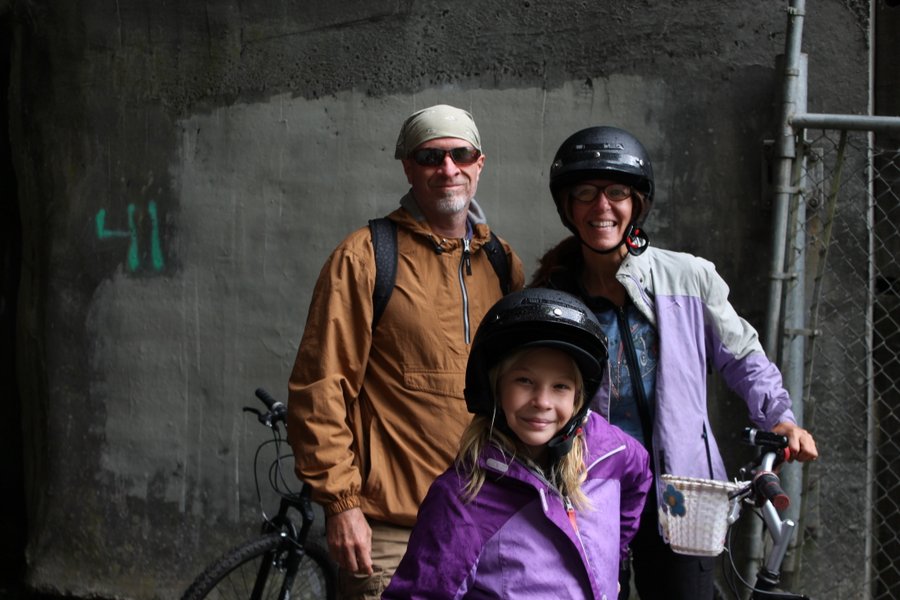 Family pic at the tunnel entrance.

We parked the RV at the lake and got in with Floyd and Lauren to ride up to the trailhead. One the way further up, Lauren pointed out the ski resort she had worked at for three previous seasons. Lauren’s job history has always intrigued me – zoo parrot keeper, photographer, Alaskan fish canner, charter boat captain, ski instructor. She is currently going to school to add computer programmer to the list. Hmm? Perhaps something for Go-Pro, the Antarctica Field Station or the Russian mafia? Anyway, I figure she will end up with a not-your-average programming job. Also during the ride, the rain came down with full own, ruin your breezy bike ride force. We all had various raingear – from the full suits to the barely adequate. We had briefly discussed positioning a car at the one potential drop-out point halfway. We had decided it was really not needed. This was to be a start and don’t drop out ride. 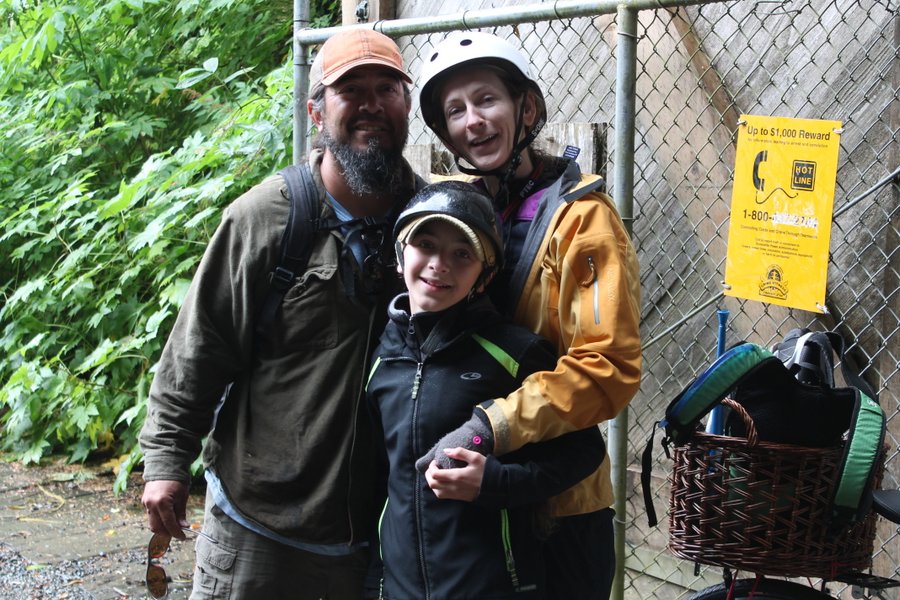 The Gallegos ready to roll. 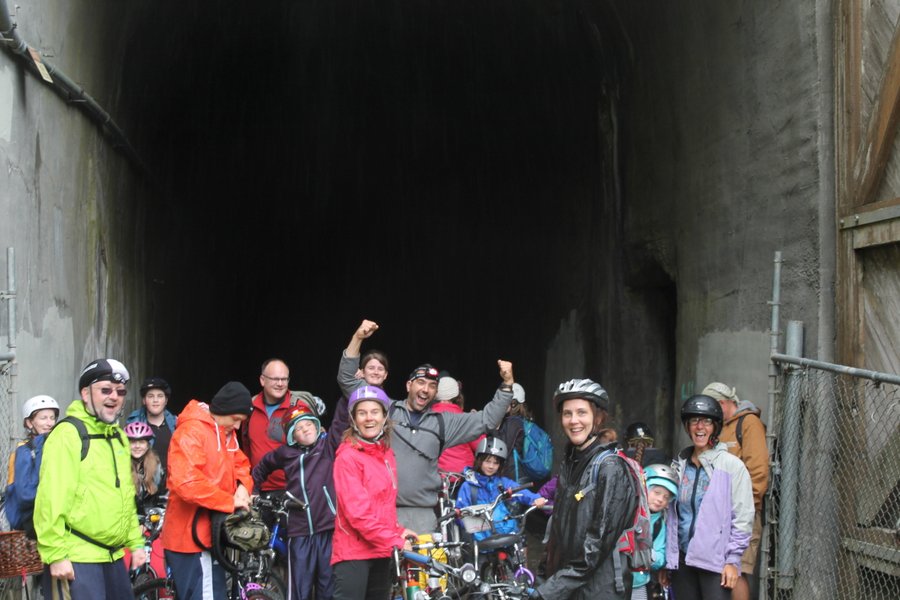 Group pic in front of the vast darkness we are about to enter.

We unloaded at the trailhead. Floyd went around to each bike with duct tape and flashlights. He had warned us all that the railroad tunnel was pitch dark and disorientation resulting in wall smack was possible. The kids peddled around the parking lot waiting for the “OK GO!” We circled up for a last minute head/helmet count and instructions for the front runners to occasionally wait up for a recount. Ben, a British engineer with clear organizational skills and a willingness to command guerrilla troops, would bring up the rear with spare tubes, a pump and a few tools. 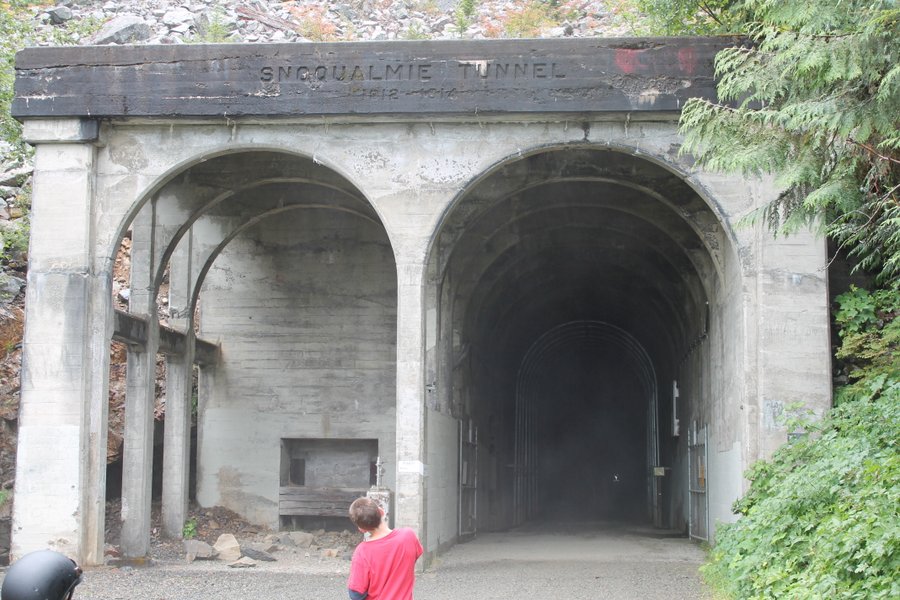 Lars reading the Tunnel capstone at the other end. 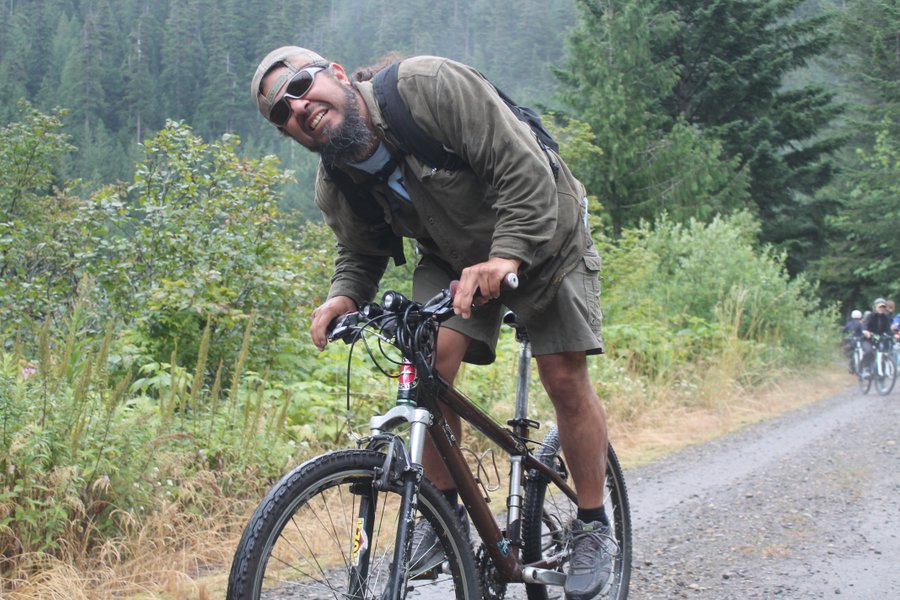 Floyd digging deep on the straightaway, trying to take the lead. 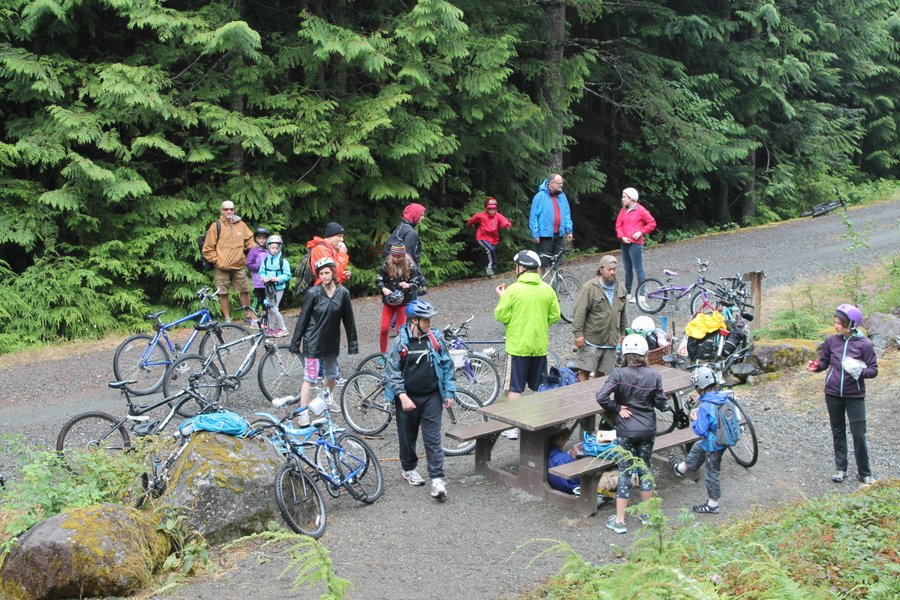 We took off and a light rain began to fall. It was just a few hundred yards to the Snoqualmie Tunnel entrance and we all crowded under the tunnel entrance for a group picture. Then we rode into darkness. It was nice, actually, to be out of the rain but it was cold in the tunnel. Randall, in shorts, said later he thought he was going to freeze in there. Lily and I had longer pants and our rainjackets on. It was still cold. We would see lights bobbing ahead of us and hear the voices of the back of the pack behind us. It was comforting to be part of a moving mass of 22. 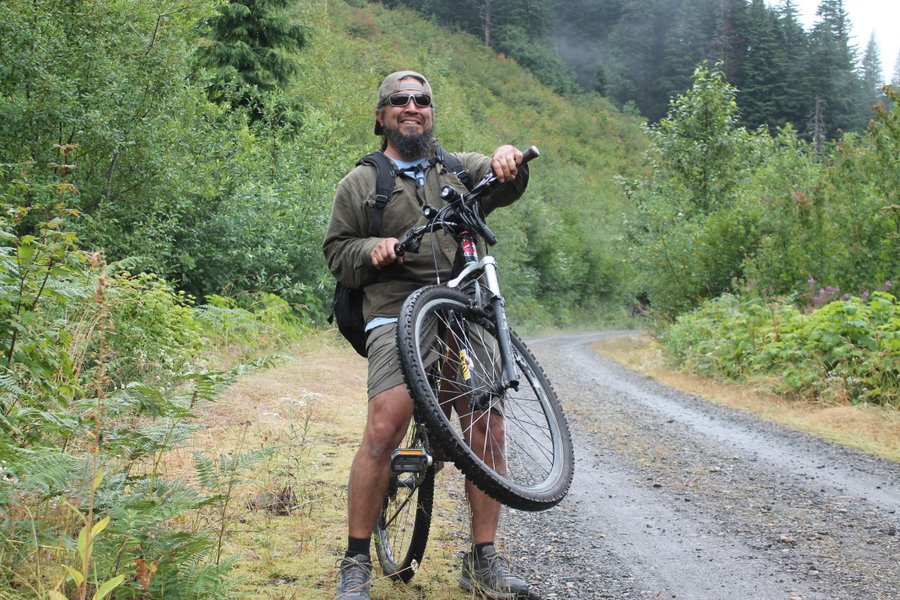 I think maybe I wasn’t supposed to get the feet showing in the picture. 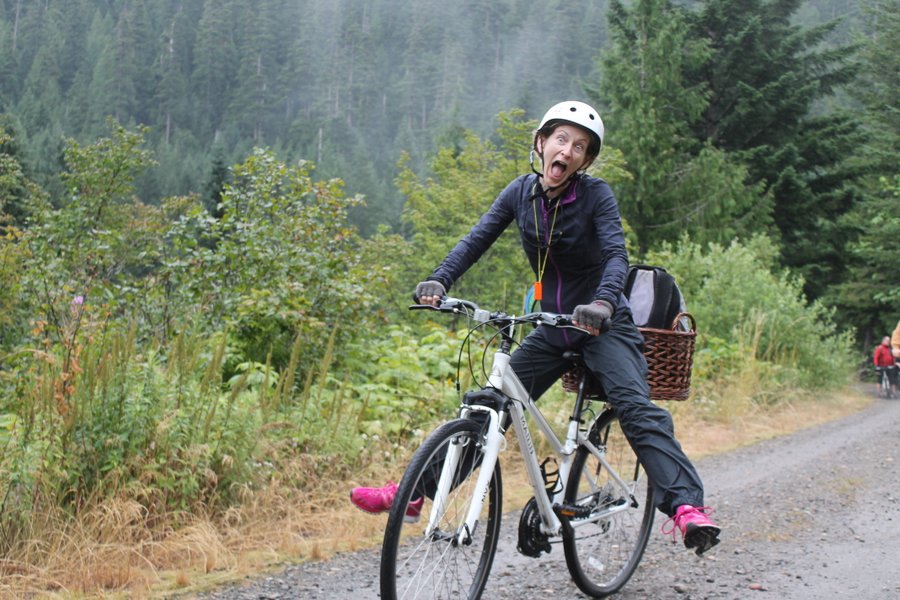 We emerged out of the darkness into light and a bit more warmth. Light rain continue to fall on and off until we reached the picnic area at the one-third mark. We stopped for a 30-minute lunch break. Lily was looking a little unhappy with my picnic packing of three granola bars. Plus she had been pedaling half-heartedly and had not been able to keep up with the kid pack in front. However, after the break, she started pedaling hard for the front. She never caught up with the frontrunners but she made it fine for the rest of the ride and really seemed to be enjoying herself by the end. At the one mile to go mark, we came to our first fork in the road. Two of the bikers were there to report a split in the group – some taking the left and other taking the right. We waited up for a bit and Ben arrived to assure us that both trails meet at the parking lot. 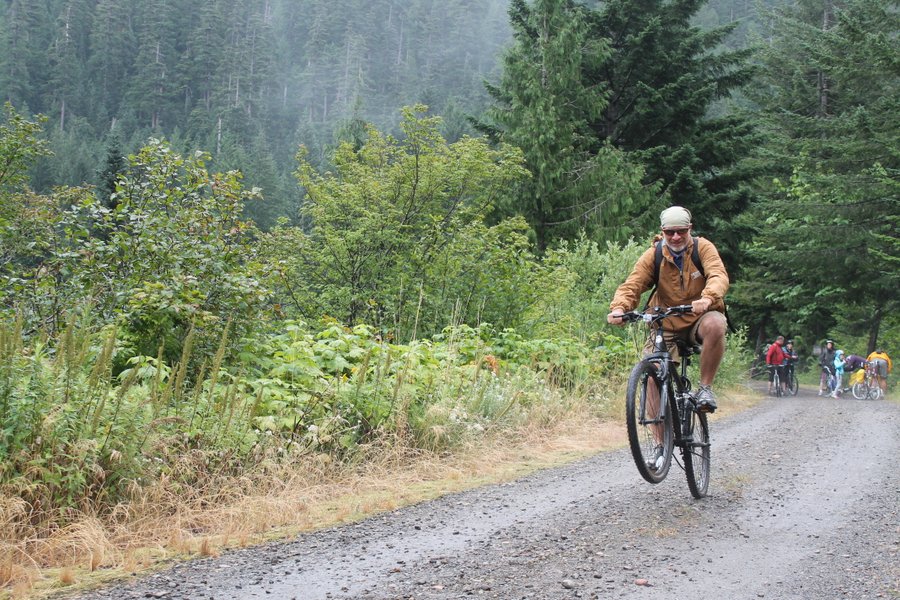 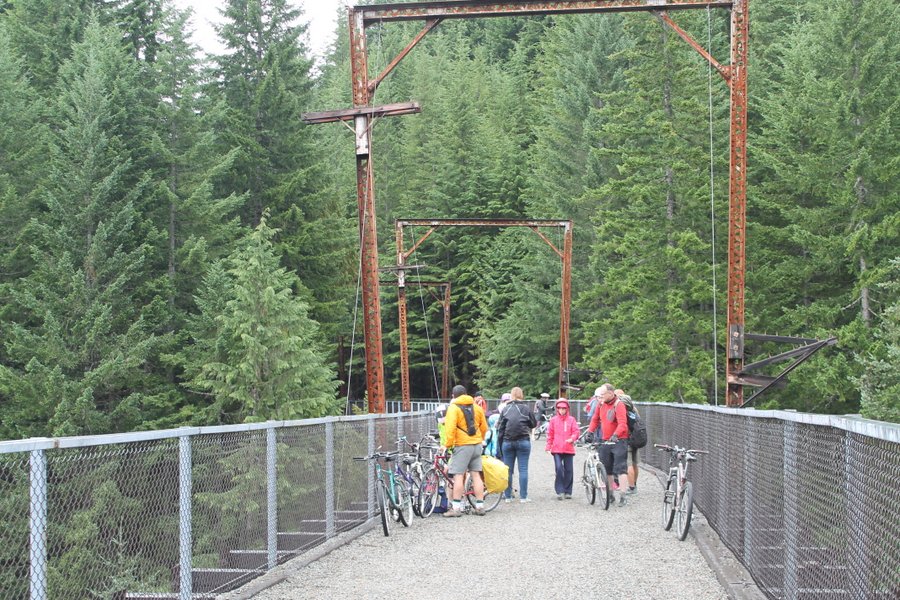 Hanging out on one of the several bridges.

At the lake, the kids piled back into the RV for hot cocoa. However, after a few minutes, they piled back out and headed for the lake. There was kayaking, sailing and paddleboarding for about an hour and then heavier rain moved in. We loaded up and said farewell to the Gallegos. Not sure where the next meet-up will be – water or land? They are trailering, too, these days and we talked about a campground meet-up. Lily sure wants them to make it to the farm someday for four-wheeling and pond swimming. Hopefully it won’t be too far down the road! 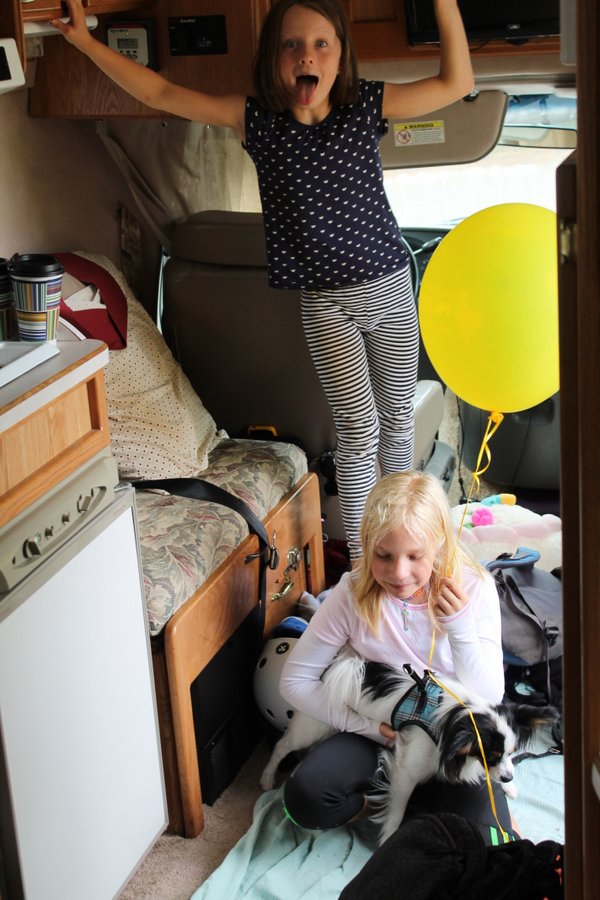 Girls playing with Arrow in the RV. I was trying to get a shot of the chaos of all our stuff thrown it but just could not quite get the effect. 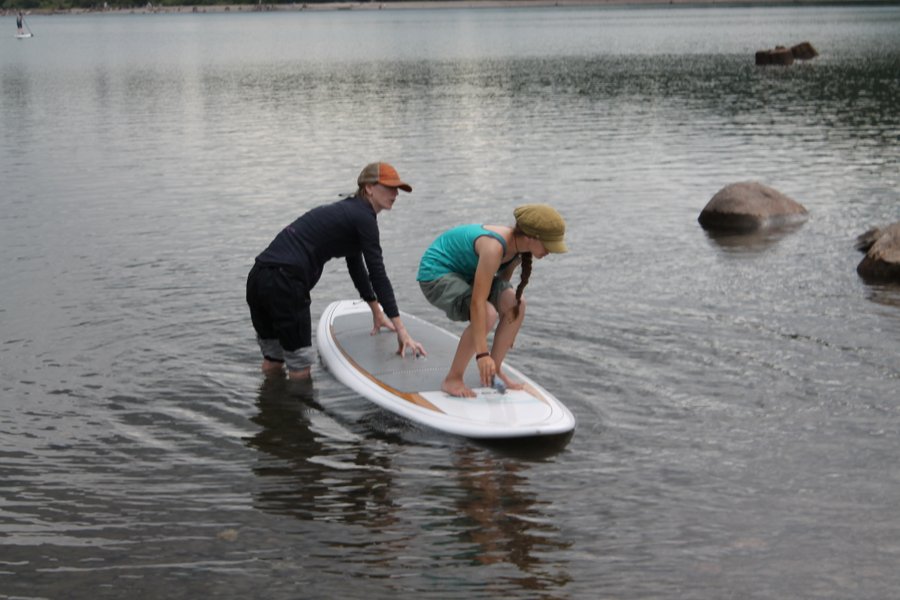 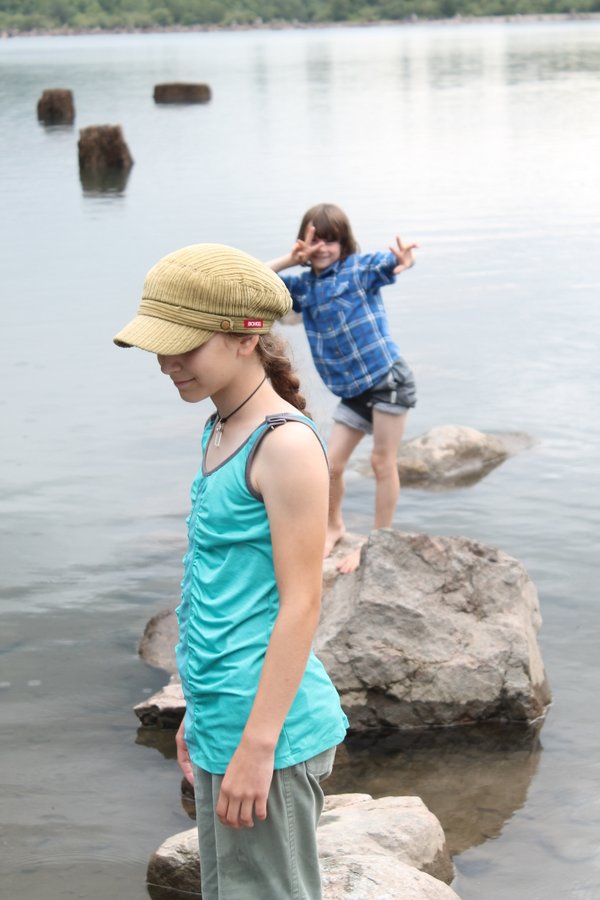 One Response to Tour de Washington