You are here: Home › Nightlife and Havana Beach 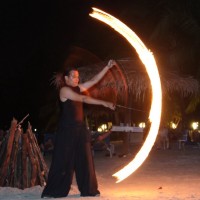 Most nights, we hit the sheets pretty soon after the sun goes down. Between volleyball, playing on the beach and the nightly cool-down cocktail, we are ready at nightfall to surrender to the gentle rocking of our berths. However, Friday night we soldiered up and stayed up until 11 pm to watch the Fantasy Island Light show. 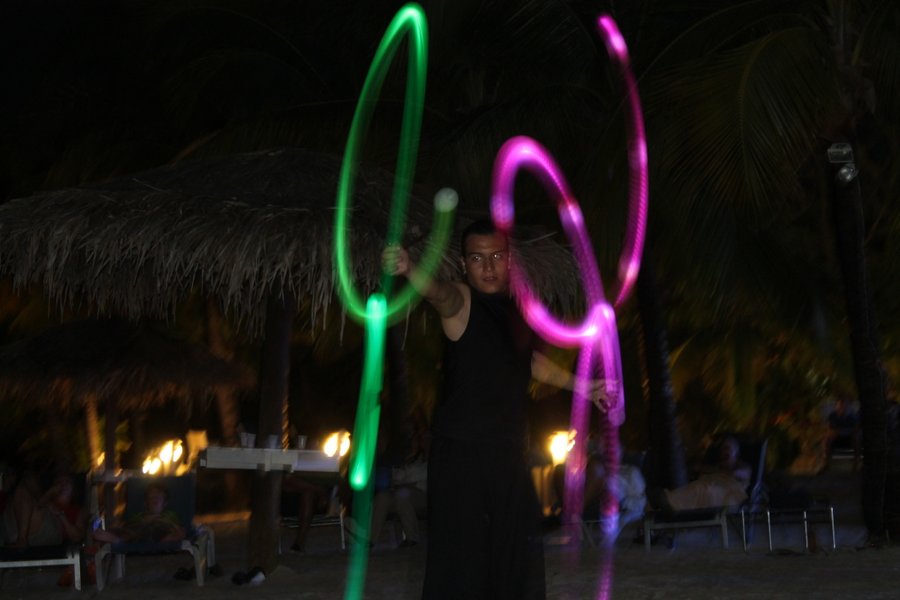 The performer twirled a couple of lights around on short tethers. The twirling got fast enough to leave a stream of light in different shapes around him. Lily said he was making the letter “B” with the lights and I was seeing more of a Fleur-de-lis pattern. For the next act, he switched to two flaming balls which he spun around, in and out and around his body. For the finale, he used clear acrylic balls which glowed from the refracted light around him. He would make the balls go up and down his shoulders and then, with some fancy finger work, he made the balls seem to float in the air in front of him. After the show, he took a little time to show the kids some of the tricks in slow motion so they could see how the illusions were created. 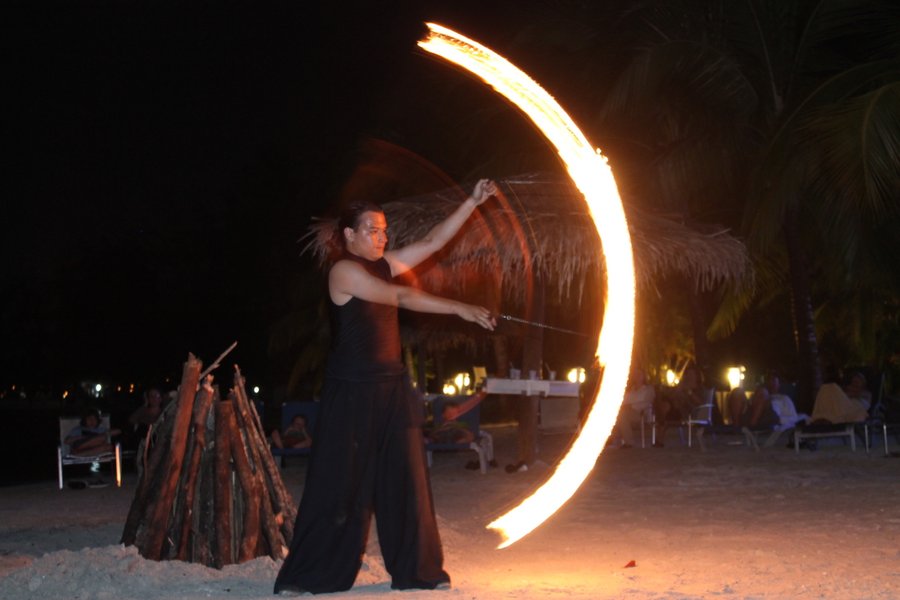 Fire balls in the air

Fantasy Island had a dj set up under the big palapa. Gordon asked Lily if she like to dance and she confirmed a familiarity with the waltz, thanks to Archer on T-Maru. They hit the dance floor for a couple of songs. What a pair. Gillian said Gordon was sent to dancing lessons as a boy. Such culture. After a few lessons, we left Gordon and Gillian to the dance floor and returned to Foxtrot.

Saturday, we got an unexpected invite to go with another family staying here on Fantasy Island down to a larger beach east of here. We piled into Dominique’s truck and got to see some beautiful, higher elevation views of both the North and South shorelines. Havana Beach was a public beach frequented by the locals. There was a long dock into deeper water that you could jump from. There was also a little, tree-covered island, just off the shore. The beach was covered in chunky shell and coral. Lily and Cheyenne played in the water awhile and then went to swing at the playground. Annie, Cheyenne’s mother, speaks mostly Spanish so she and I were throwing out bits of conversation to see what the other understood. Annie was telling my about their coffee farm near Lago de Yojoa in Central Honduras. Suddenly, a little girl falls from the monkey bars behind us and immediately lets out a painful cry. Annie went over to check on her and the little girl’s upper thigh looked swollen. The girl could not move it at all and could not bear to have it touched. Dominique came to take a look and thought it looked broken. The next 30 minutes the mother tried to get her situated for the rough ride back to the highway. Dominique said they would have no problem finding her medical care but that the quality standards would vary a good deal depending on what they could pay. Our thoughts have been with little Monica all weekend.

Snorkeling Update
Live in the Sunshine, Swim The Sea, Drink The Wild Air