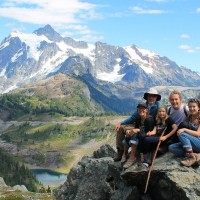 We headed up to the Cascades on Friday.  Jake and Kelsey had already spent a little time camping in the area but had not hit many hiking trails. The weather for them had been cold and drizzly forcing them to dig out their winter coats. Yikes! I didn’t even have a winter coat on board so this was a little disconcerting. 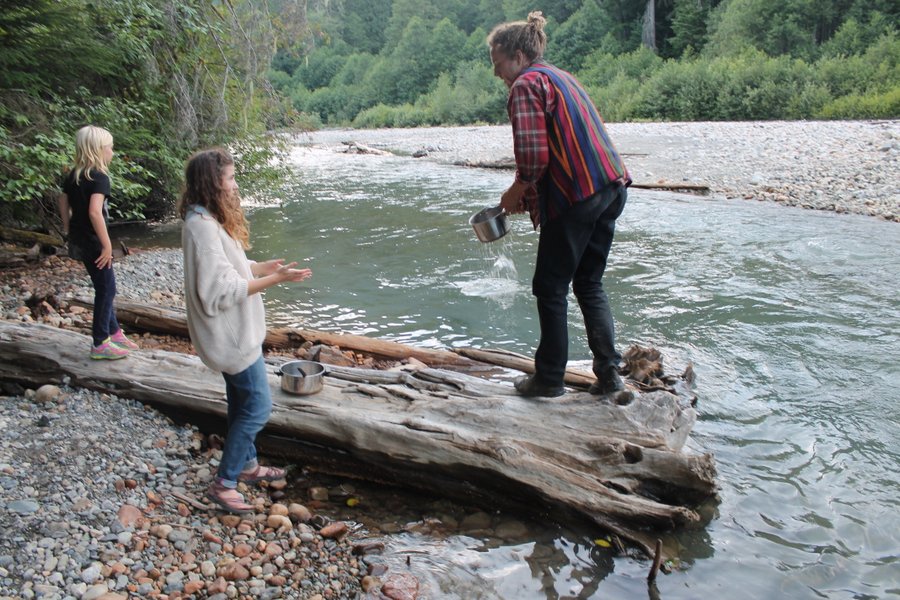 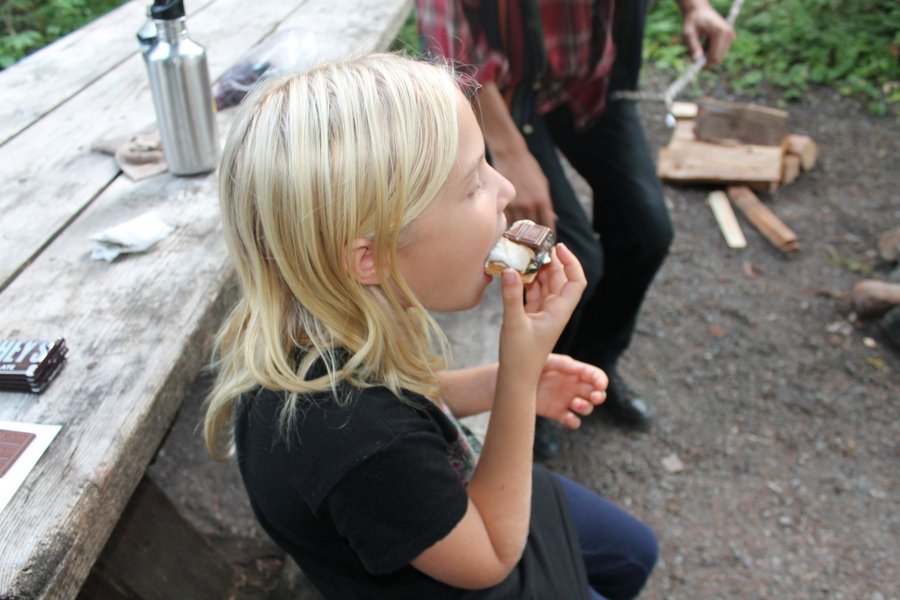 Smores. Everyone had their own technique. Mine involved blackberries (double the mess). 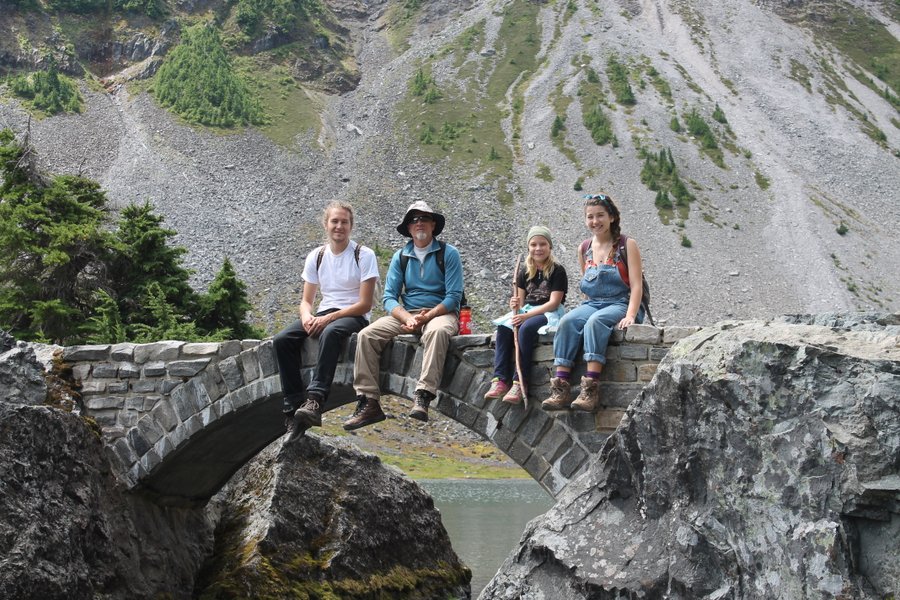 We were a lot more haggard looking crossing this bridge the second time.

We took the Mt. Baker Scenic Highway and stopped at the visitor’s center to get oriented and figure out campsite options. There is plenty of free RV boondocking spots in the National Forest but we decided to take a drive through the Silver Fir Campground to see about availability. We followed the park hosts as they put up “Reserved” signs at every site. They finally stopped at one site long enough for us to make inquiries and they had one canceled reservation. We ended up in a beautiful spot at the end of the campground with a great view of the river. 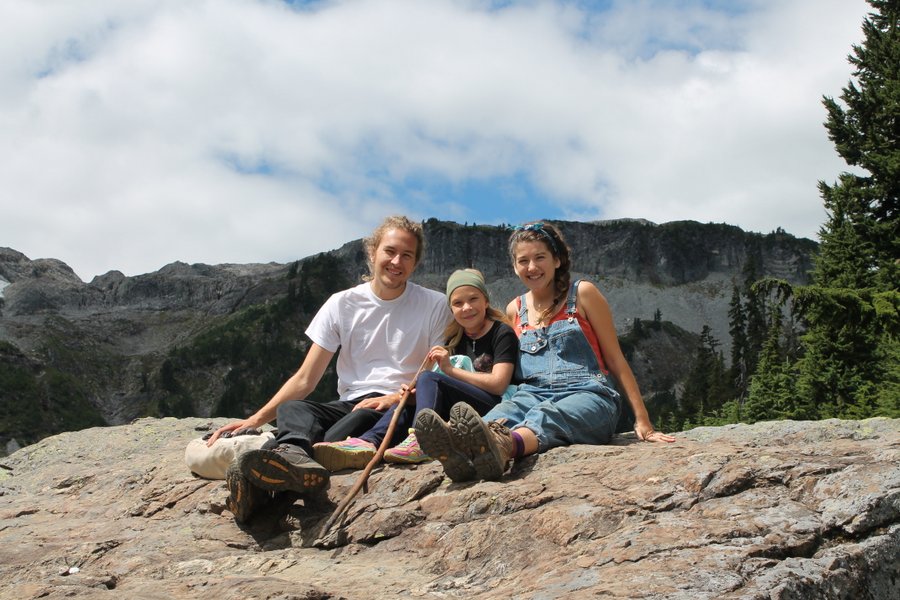 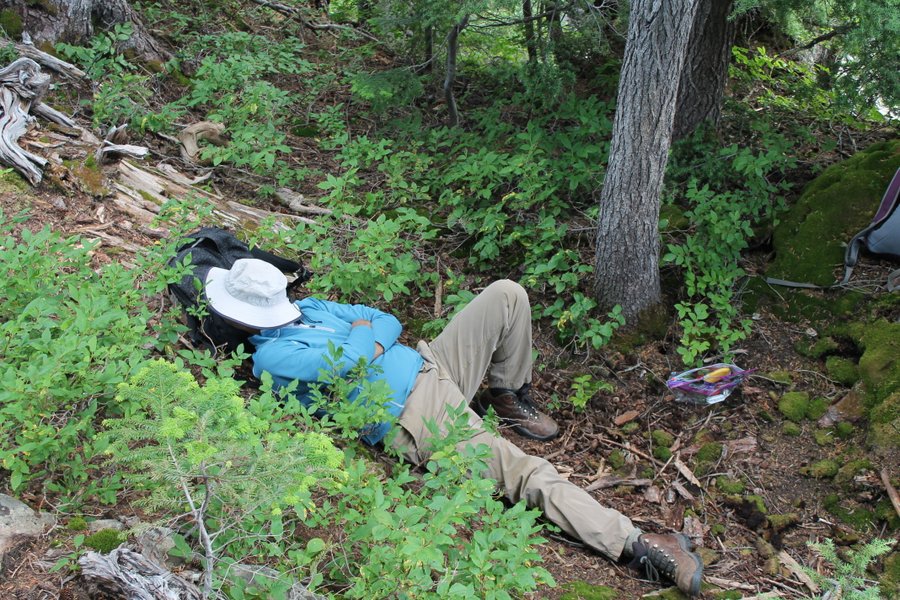 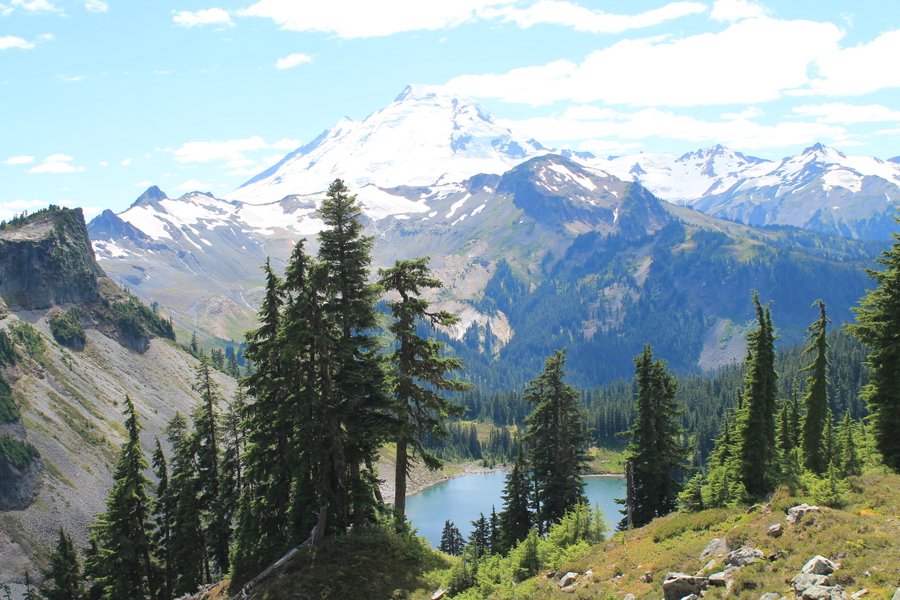 Saturday morning, we poured over the trail map trying to decide among the many options. We finally decided to give Chain Lakes Trail a try. It was a six-mile loop around several small lakes and seemed scenery-promising. The first half of the trail was like a wildflower garden with lots of purple aster, tall spikey pink flowers and butterflies. We passed a couple of pretty lakes and then the trail started its ascent. We hiked along a small ice-melt stream for a while and filled our water bottles from the chilly water. Then the more serious ascent started. Lily was slowing down a bit so we picked out a couple of pine trees at the top and started discussing the lengthy picnic we were to have under their shade. However, the distance was hard to judge and after each set of switchbacks, the picnic site seemed no closer. We slowed the pace and realized the ladies lingering on the trail were picking wild blueberries. We had noticed the berries but were just a little unsure about ingesting but the sight of the ladies enjoying the wild treats was all we needed to plunge into picking too. At first, Lily claimed she didn’t like blueberries unless they were frozen but she did love harvesting and was soon putting the berries in her mouth just to put them somewhere. She said they tasted a little like bananas and kept calling them banana blueberries. 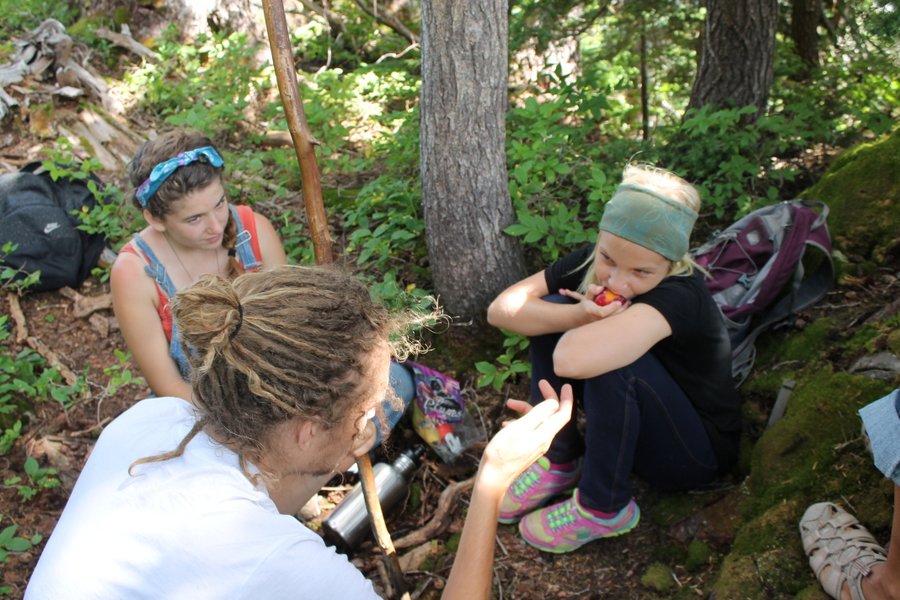 Not sure what he is saying but Jake is getting skeptical looks from both of them. 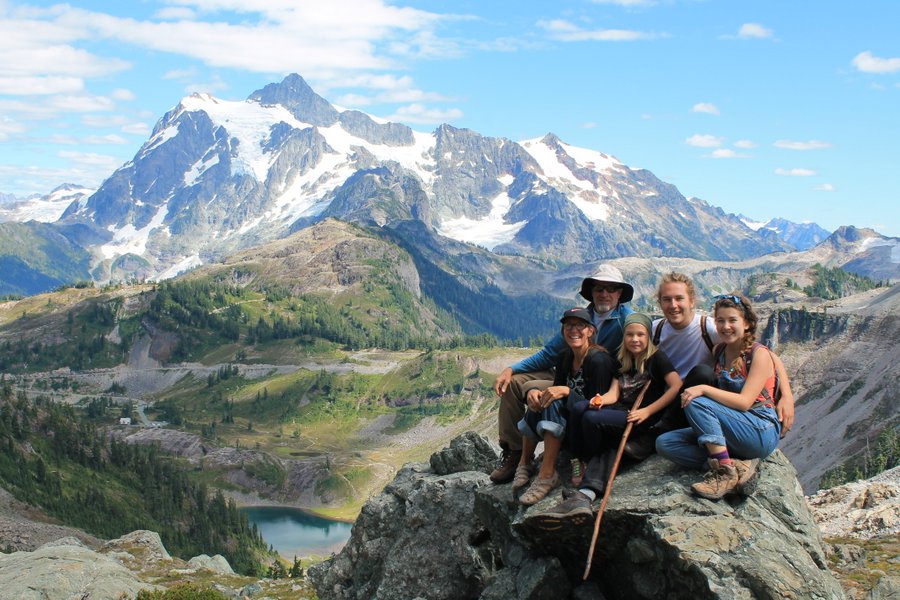 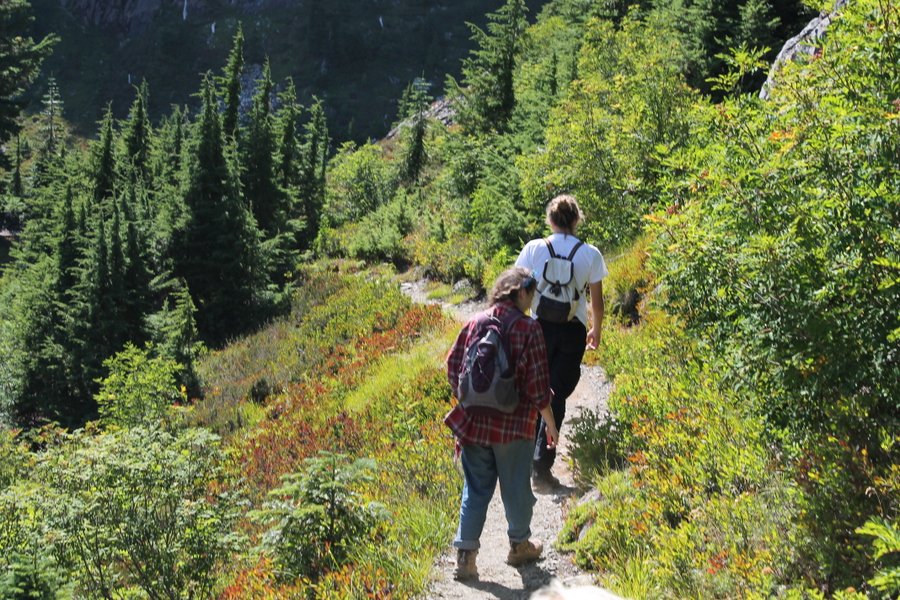 Lush vegetation all around.

We finally made it to the summit we had selected. We had a view of both snow-covered Mount Shuksan sitting above us and a remote, deep blue Iceberg Lake below us. Some of the hikers were hiking past with loaded down backpacks and we could easily picture pitching a tent down at the more remote lakes. However, we had our cozy riversite campsite waiting. We returned more quickly down the slope but paused at the stream to cool our feet and then picked a spot to cross over to the other side for the hike back home. That night, we had hobo meals on the campfire followed by warm crusty smores. 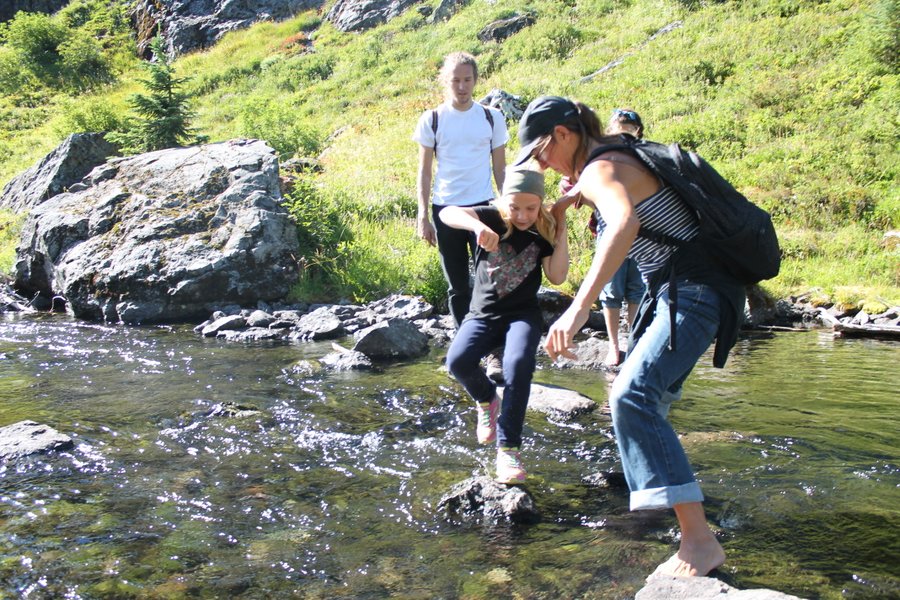 Creek crossing. It was sunny but we still weren’t up for swimming the snow-melt. 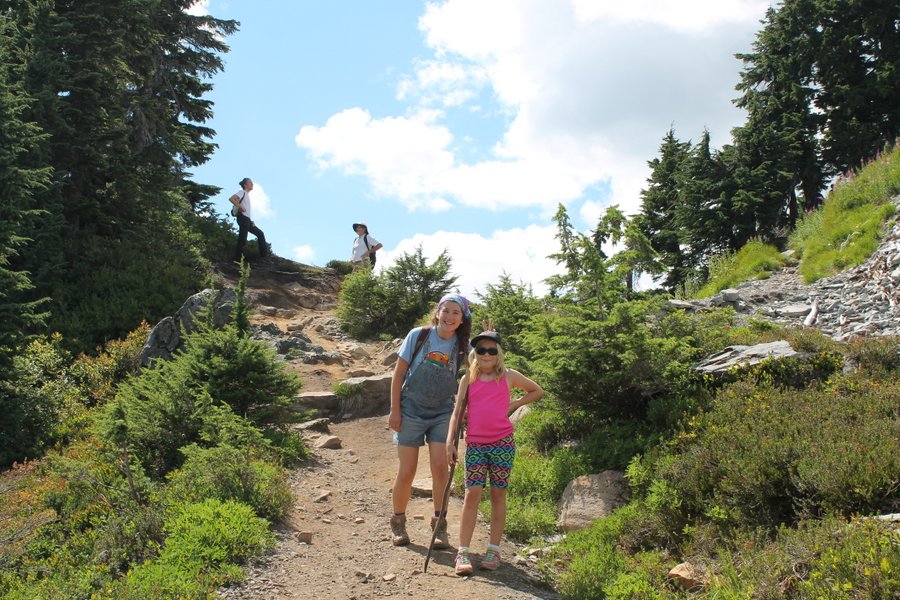 Jake isn’t getting much Kelsey time now that Lily has crowded onto the scene. 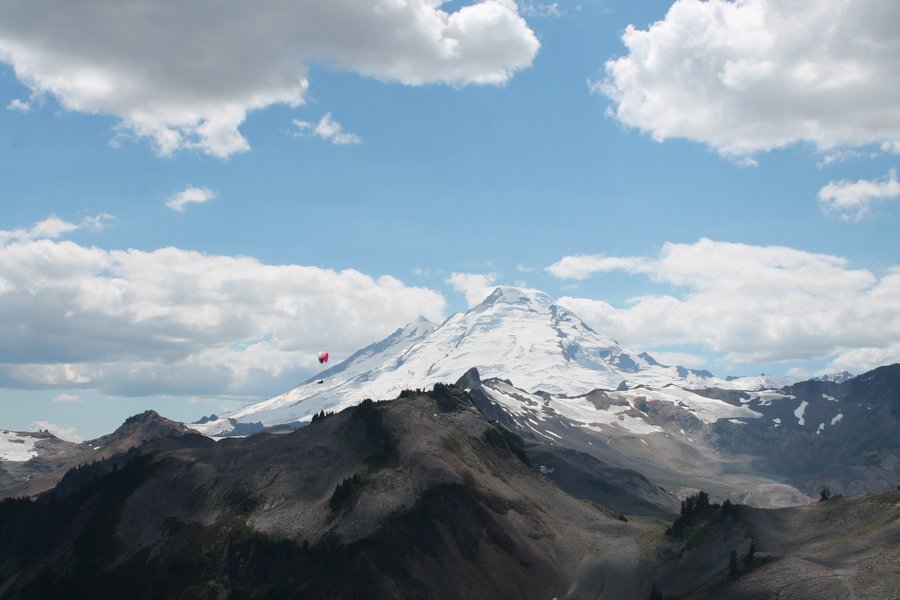 Paraglider swooping over the valley with Mount Baker in the background. 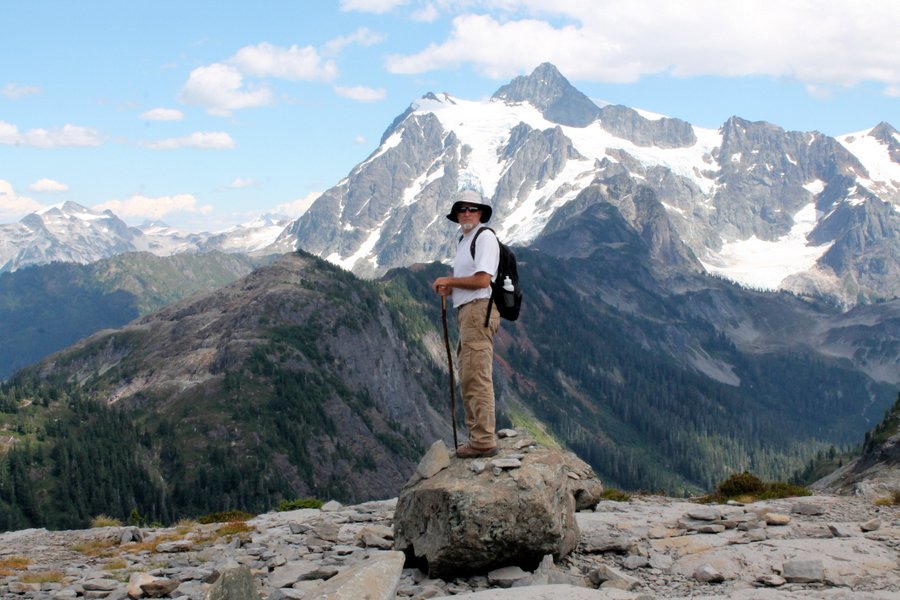 Randall atop a rock at Tablerock.

On Sunday, we picked a much shorter hiking trail. The Tablerock trail was actually much steeper and included a rewarding summit at the end. We made it up after about an hour and had a panoramic view of Mount Shuksan, Rainbow Ridge and the highest point in the North Cascades, Mount Baker (10,781 ft). We could also look down on yesterday’s hiking trail far below and it looked like the impressive feat we felt it to be when we finally finished. Once we got down Tablerock, we chatted a bit with the rangers set up at a tent in the parking lot. They had a telescope trained on the peak of Mount Baker and, looking through, we could just make out the neon jackets of four climbers at the summit. Wow, how exciting. They had some real ice and snow to deal with in addition to the steep grade. There are advertisements on the local maps for a guided two-day climb of Mount Baker. Tempting. Until you really think about all that climbing and ice and deadly heights. 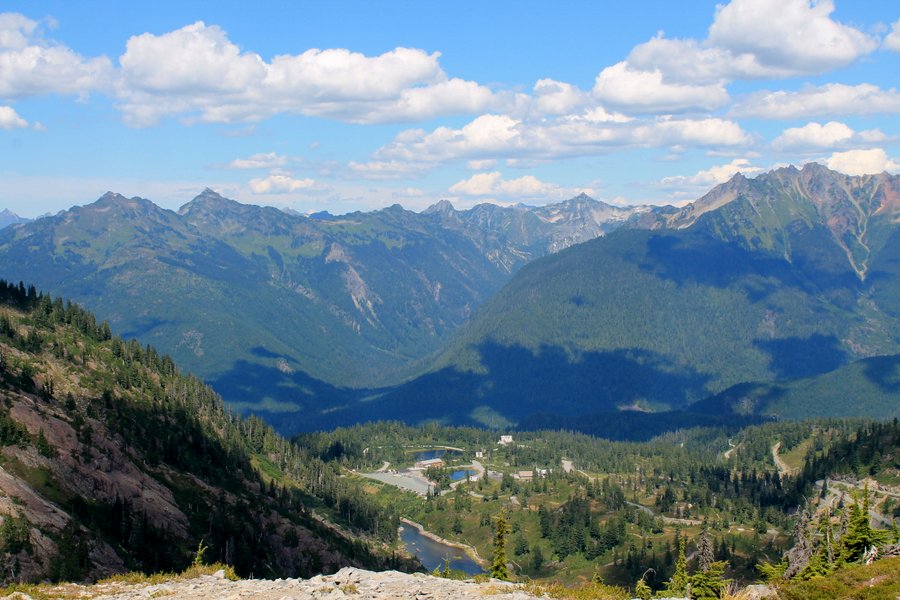 Looking down from Tablerock at the Chain Lakes we hiked the preceding day. 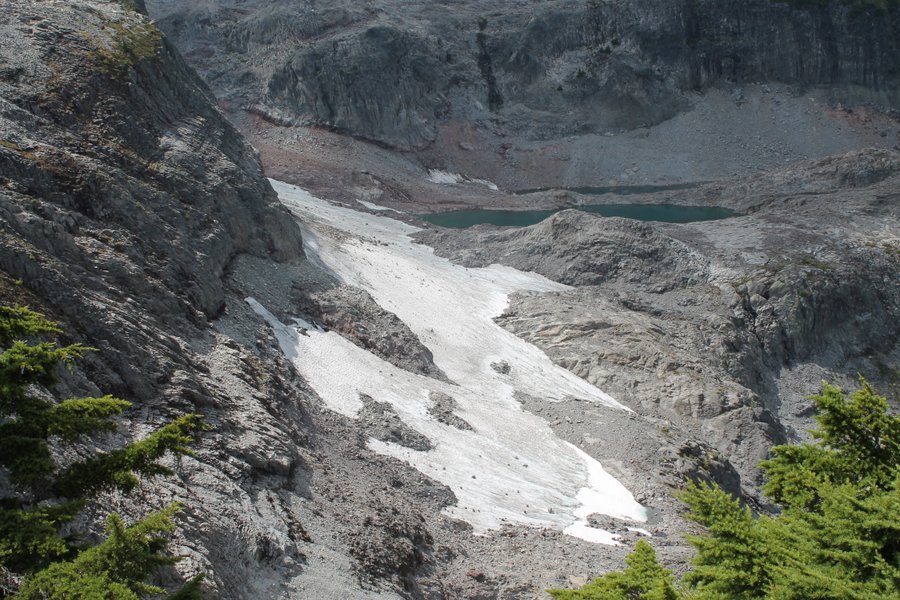 Snowy slope below us. We saw lots of snow and were near a few patches but did not quite reach them. 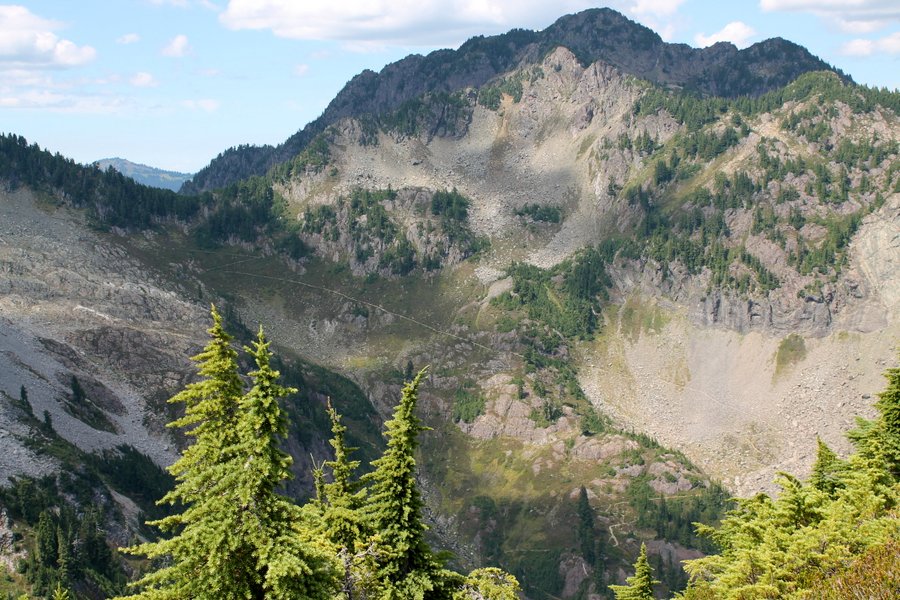 You can just make out the zigs and zags of of the trail below which we had hiked the preceding day.

We also passed a couple of ski resort areas. We would love to try out the skiing around here in the winter. There are snowshoeing trails throughout the park, too. Hopefully, we get to return sometime for a ski vacation. However, our summer trip was done. We had to return to town for cell service and returning a few business calls this week. On the way out, we stopped at Nooksack Falls to see the Nooksack plummet down the rocky crevasse. There were signs everywhere warning visitors away from the slippery rocks at the edge. The sign near the trailhead had a nice pic of the falls and then a list of the people of who had fallen to their deaths in the falls. All were too young, much too young. 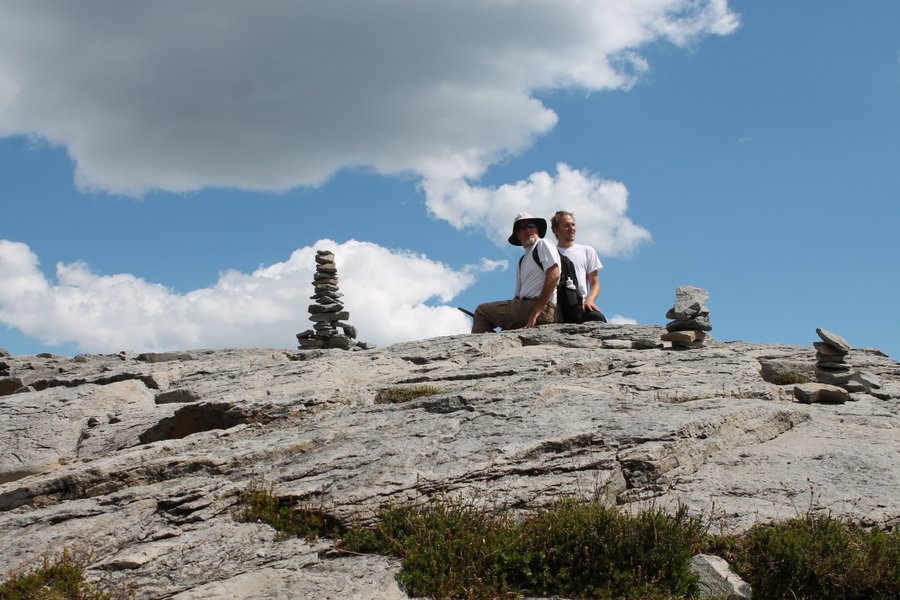 Randall and Jake among the cairns. 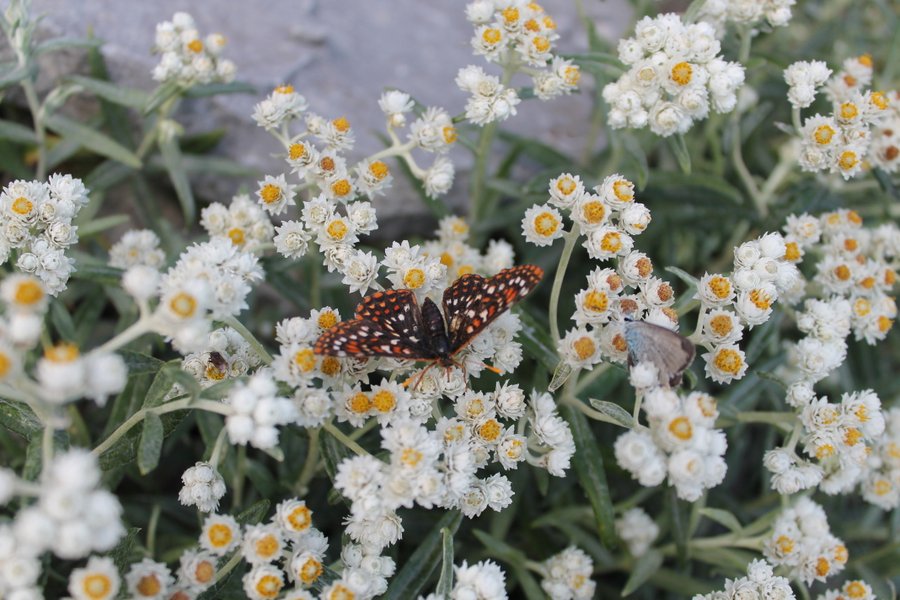 Brown butterfly on the wildflowers. 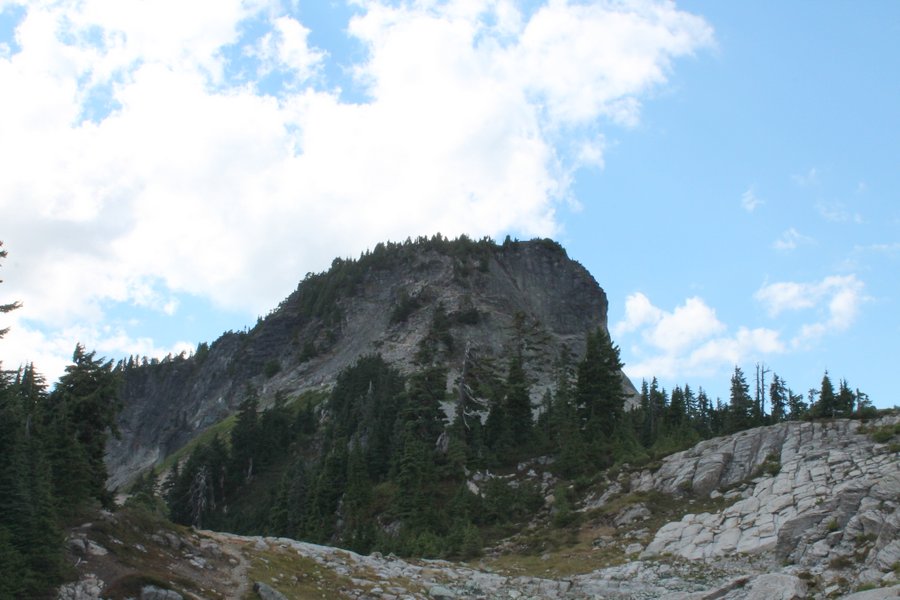 Tablerock. Yes, we made it all the way to the top of this one.

As we were driving back to Bellingham, we finally got cell service again and T-Mobile messaged up “Welcome to Canada!” They are so confused. They have welcomed us to Mexico and Honduras without error but can’t figure out the confusing America-Canada border. Hopefully, we do make it up there but there is still lots to see and do around here. 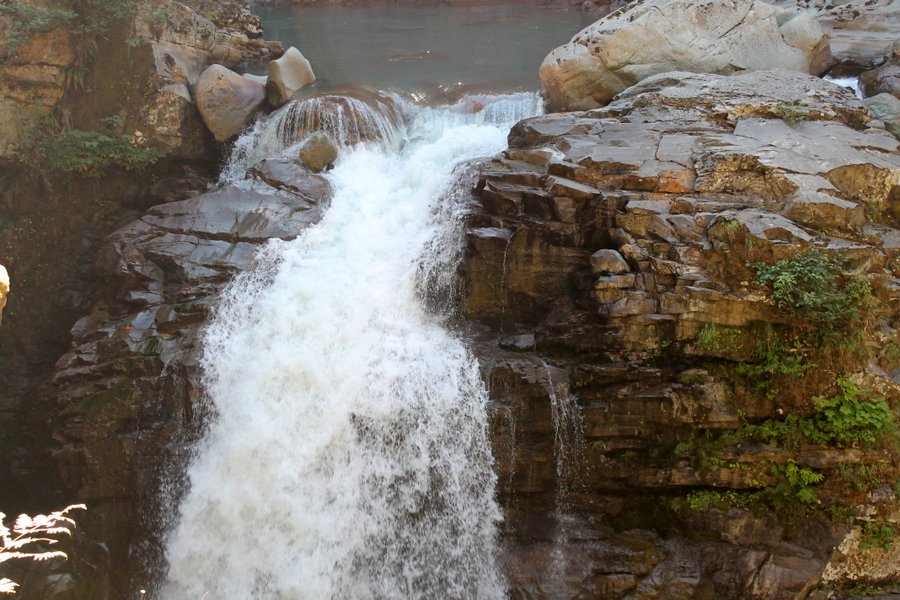 Nooksack Falls is hard to get a picture of from the fenced trail. 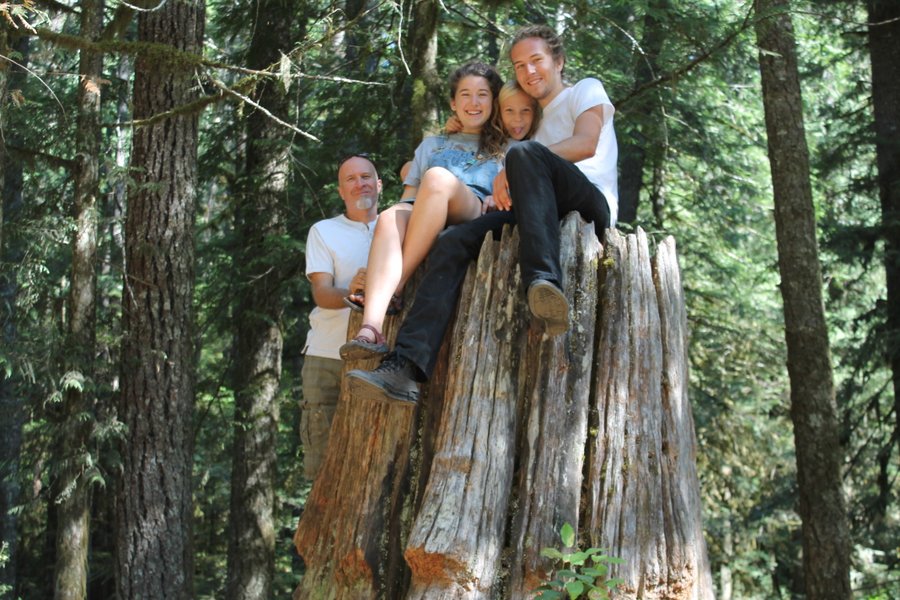 Gigantic tree stumps are all around the forest.