Earlier this week Lucy at Tijax Marina helped us get set up for horseback riding. We were trying to decide between the horseback riding and the kayak trip to see the monkey excursion on our own since we have a dinghy. She drew us a little map so we could find the stream known for monkey spotting.

Yesterday morning, we motored over in the dink to Monkey Bay. Just as Lucy indicated, Monkey Bay has a little tributary feeding it which is almost hidden in the foliage. We found the opening and headed the boat up through the towering trees. As soon as we were off the bay and into the stream, we cut the engine off to row. At once, we began to hear the strange, loud howler monkey cries. The commotion came from farther upstream so we kept rowing, all eyes on the upper canopy. Finally, we began to make out branches moving and small little black bodies jumping around from tree to tree. We heard a few crashes and told Lily they were probably throwing coconuts at us. If so, they were poor shots.

We rowed around hoping for a closer look but the Howlers seemed to be all war cry and no engagement. We took a little side stream which was completely y covered with tiny clover-like foliage. Lily took the oars and meandered around while Randall and I kept watch for any movement on the banks.

As the sun got higher, we turned back for Monkey Bay and headed for Catamaran Marina. Jim and Marley of Cool Runnings made it to their slip at Catamaran and had invited us for coffee after the monkey tour. We met them back at Isla Mujeres and crossed paths again in Puerto Morales, Cozumel & Placencia. They have spent several years out and about in this area and have tons of other great travel stories from around the world. We made plans to buddy boat with them next week up the river to Denny’s Beach and Finca De Paraiso and will probably anchor overnight somewhere up river to have plenty of time to see everything.

This morning, Jake left for Guatemala City. He got an invite to go with Sonny for the weekend up to Guat City and perhaps to Antigua as well. Sonny, 25, works here at the marina for his mom, Marlene, and has been really helpful with local information. He mentioned that he goes to Guatemala City frequently to see friends and run marina errands and that Jake could come along and see the sights too. Jake, of course, is keen to spend some time off the boat and on his own.
Lily and I spent the morning making a necklace from bright red Nyra beans she has collected. We had heard that the Maya used to use the beans for jewelry and Marlene said they are also still used for rosary beards. Her necklace turned out really pretty. While we were beading, Randall was trying to load a bunch of his work stuff on to my computer. He plugged his computer in to charge yesterday and it started smoking. He was able to get most of his stuff off the hard drive but the computer is dead. We will be computer sharing until we figure out the best solution to this problem. The nearest computer seems to be a 10 hour bus ride away. We ended the day with a shopping trip downtown. During a little negotiation for a stack of warm handmade corn tortillas, Randall tried to make clear his desire for just a few tortillas. The street vendor got to laughing. We are not really sure where the conversation broke down but she hurled out a stream of something to the street vendor beside her and the only word we could make out was, “Gringo”. She probably said something along the lines of, “These damn Gringos have more money than sense”. Since we have neither, she managed to sell him about 20 tortillas for $0.75. I think she had some kind of minimum purchase rule for Gringos. Anyway, they are not quite as good as the flour tortillas but are still tasty with a generous spread of frijoles. 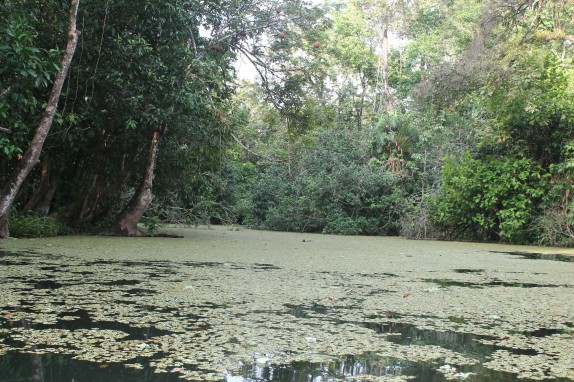 The monkeys would not come out for a picture but they were lots of fun to listen too. 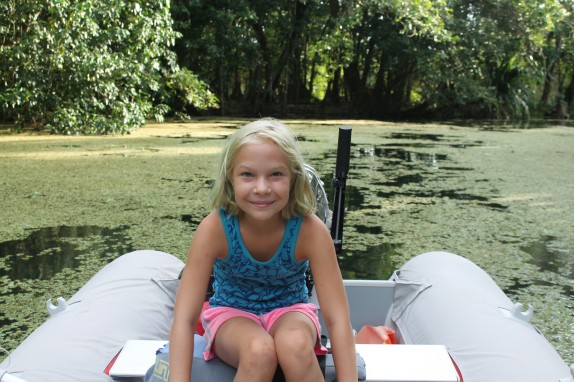 You can see our little path through the floating plants.

2 Responses to Monkeying around in Monkey Bay

Leave a Reply to adminsvfoxtrot Click here to cancel reply.