You are here: Home › Fickle Hearts In Rough Seas 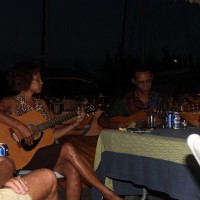 Yesterday, we trailed Susie and John around the island as they did their gourmet shopping. John is making sushi for the upcoming island cook-off so sushi supplies were purchased at Bulk Gourmet. We stopped at a small open air carneceria in Coxen Hole for some ground pork and they told the butchers how well their last purchase – pork belly – had turned out as smoked maple-marinated bacon. We stopped at two grocery stores in Coxen Hole looking for unseasoned rice wine vinegar. Then we wrapped up at the chicken farm for farm-raised chicken and pork chops. Trust me, if you are a gourmet cook, you will do fine in Roatan. We just stocked up on basics but it was a fun excursion.

The day ended at the Brooksey Point potluck. We had live music from a sister and brother band from the island. They performed some Abba, John Denver and Bob Marley. There were some sing-alongs. It was beautiful. 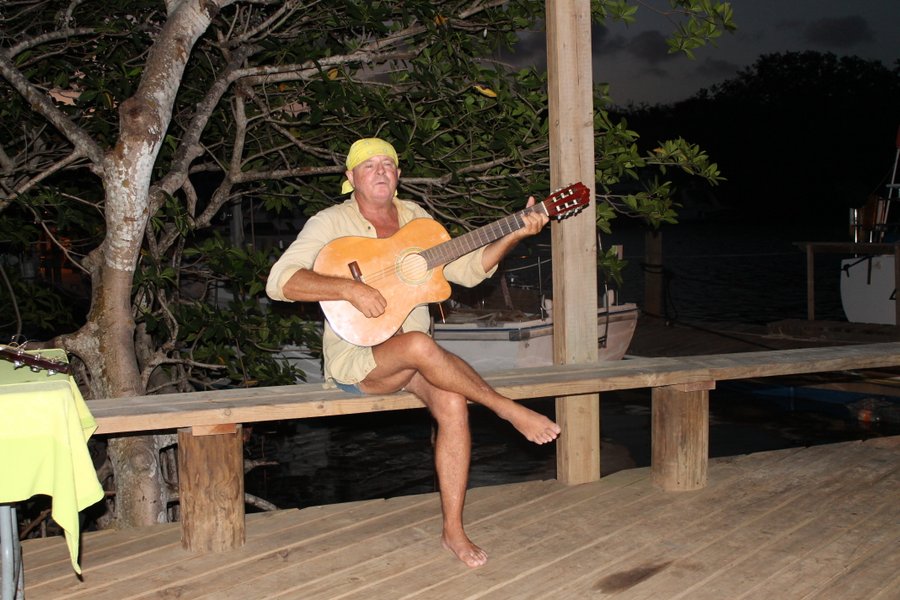 The warm-up act performing House of the Rising Sun 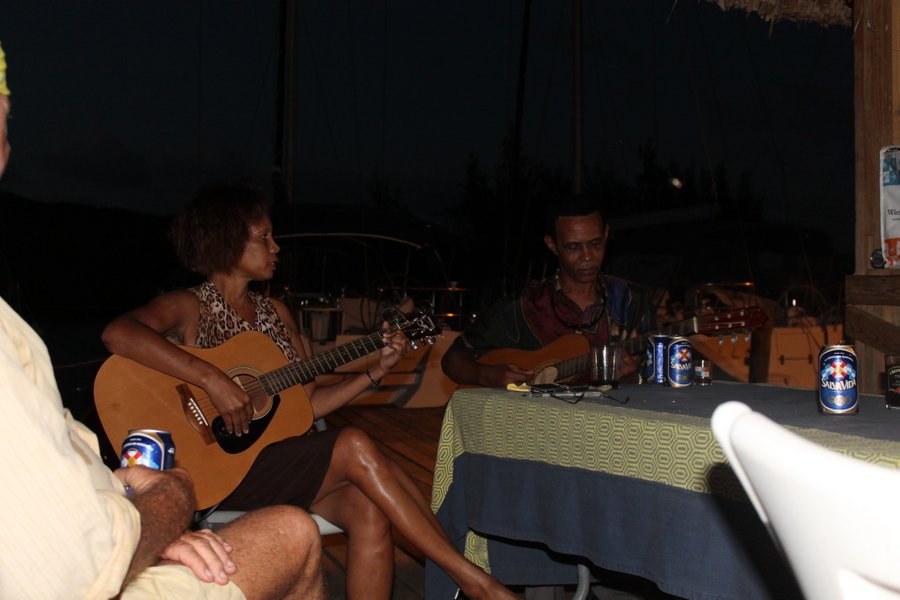 After dinner, we got to talking about rough seas with John and Susie, and Shelly and Kyle of Blowing Bubbles. Sailors don’t always talk about rough seas but when they do, I will ALWAYS now think of this story. Susie was filling us in on their first trip 20 years ago aboard their former sailboat Chardonnay. They were en route to Coos Bay Oregon and got caught in a storm. “No lie. 40 foot seas,” said Susie. Because it was their first sail, John had apparently schooled Susie on proper radio etiquette, explaining how to hail and how to keep the conversation professional. He is a pilot so I am sure this is a subject dear to his heart. Anyway, they had been pounding into these seas for hours. Susie said she saw dolphins swimming in the waves 20 feet above the boat. At some point after nightfall, Susie told John she was leaving him once they got to shore. At 3 am, the seas and wind were building. Susie had been at the helm trying to steer into the oncoming waves while John got some sleep. When he returned to the helm, Susie went below and decided to radio the Coast Guard with their location. She grabs the radio and keys the mike with a shaking hand.

She gets an immediate reply. “This is the US Coast Guard. Come ahead Chardonney.”

“I AM SO SCARED!!!” Susie cries out in a straight-from-the-heart, don’t-give-shit-about-radio-etiquette moment.

“We need your coordinates,” replies the ever calm coastie.

Susie shakily reads off their coordinates.

“So you want us to come get you off?”

And, of course, Susie did want exactly that. Please!! However, with John at the helm and a calm coast guard operator on the radio, she stuck it out. The same coast guard radio operator stayed on the radio with them through the rest of the trip – over 24 hours. They discussed weather conditions and he talked them through getting into Coos Bay safely which was closed to commercial traffic due to the conditions. At one point, a relationship formed. Susie, still a little shaky but with fresh plans for the future, stuck her head in the cockpit with this update:

“Honey, I love you and all. Really I do, but I just thought you should know, when we get to shore, I am going to MARRY THIS GUY,” she said and then returned to her station at the radio.

They finally made it in to the marina. The Coast Guard team was down on the dock to catch lines. They asked her if she wanted to meet the radio operator who had stayed at his post so long to keep them company. She did. She went up on the bow for this exciting moment and her first thought upon seeing the guy waiting to meet her too was, “Damn. I can’t marry a twelve-year-old!!” Yeah, those coast guard guys are always so young. Maybe not 12, buy young. Susie and John set to work cleaning up the chaotic mess their boat was but were distracted when they found a bottle of wine. Over wine, Susie agreed to help him get the boat to San Francisco before leaving him for good. He said that was fair. Leaving Coos Bay, Susie was now sent to the bow of the boat to try to make out the traffic through thick fog. “I couldn’t see a thing. Just black dots dancing in my eyes from trying to look. And I was, well, perturbed!” she exclaimed to give us a little insight on the tension still on the boat. She stood there trying to make out something in the gray ahead, turned her head a bit and caught sight of a black wall 100 feet tall looming right beside them. I grabbed the radio, she said, and started screaming, “Get out of our way. Get out of our way!!” The coast guard immediately came on the radio, too. “Susie, you’re Ok.” they said and proceeded with a few traffic-control instructions for them and the tanker. Kyle, listening to the details of this story, has decided that the coast guard now has a communication training drill called “The Susie.”

Anyway, they avoided collision and, upon reaching San Fransisco Bay, John found several other cruising ladies and gave them plenty of money for a rollicking night out with Susie. He told them to make sure Susie’s drink was always full. She sobered up after a couple of days and had forgotten the divorce plans. Well, was at least less set on an immediate time frame, anyway. They have been cruising for many years with the past few years aboard the motor yacht, Cabaret. However, Cabaret is now up for sale. They plan to travel in Asia once the boat is sold but Susie and John have amassed quite the store of cruising advice. 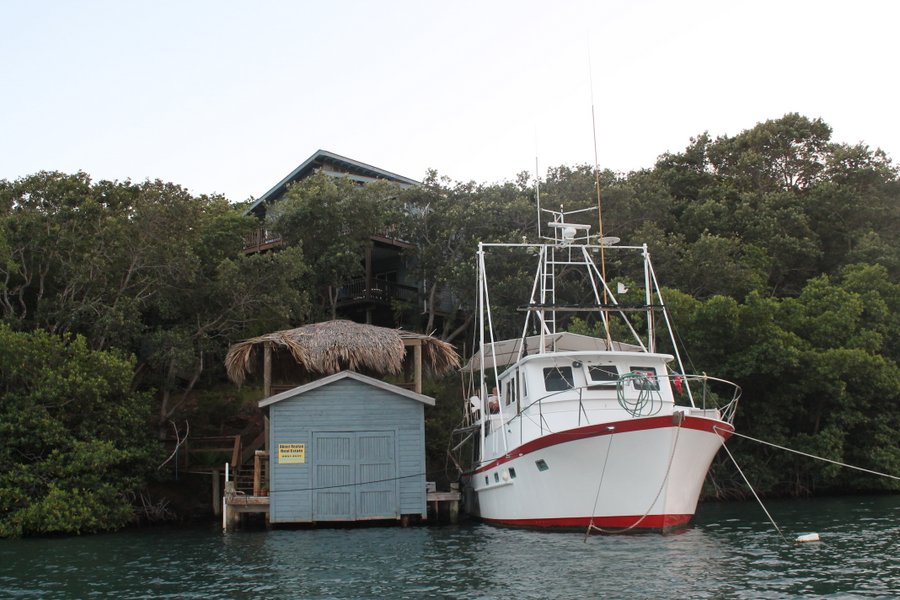 Cabaret with “For Sale” sign in the window. Come join us in paradise. Listing is at YachtWorld.com.

“We used to have this rule – no drinking while underway,” she said. We all nodded our heads. This is THE RULE on almost every boat at sea as all senses need to be on full alert.

“Well, after several years of that rule, I threw that right out the door. Chug a beer. If that doesn’t work, vodka does.” Susie said. We all howled with laughter because the thought does cross our minds and here is Susie saying something like – You whimpy-doodles, just do it. You don’t want to be a nervous wreck, out there. Yes, she uses words like whimpy-doodle and lots of other colorful language which got a little edited in the interest of young readers. Yes, I know, sometimes you’ve got to go with the words that pour out, Susie-style. I just need more practice.

Susie giving Shelly a neck message. Susie is a massage therapist and is in much demand among cruisers who have fought down too many loose sails or tripped over too many unforgiving cleats.

One Response to Fickle Hearts In Rough Seas